The collections about Venezuela largely concern the period 1950–2000. They contain materials on Venezuelan politics before the Hugo Chavez era, including documents on left-wing guerrillas in the 1960s. Other collections relate to the petroleum industry in Venezuela and attempts to introduce laissez-faire economic policies. 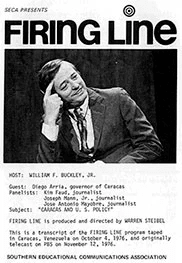 In 2007 Paris-based sociologist Elizabeth Burgos, a native of Venezuela, filled twenty-six cassette tapes with interviews of student and other critics of the increasing authoritarianism and regressive “twenty-first century socialism” of Venezuelan president Hugo Chavez. Many students are interviewed here as are members of other groups and individuals.