On Friday, March 11, the Hoover Tower was illuminated in the colors of the Ukrainian flag as a show of support for the people of Ukraine. Together, President Tessier-Lavigne and Director Condoleezza Rice consulted and decided that it would be appropriate to have the Hoover Tower, given its historic relation to Ukraine, as a location to show our solidarity with the brave men and women fighting for their country. 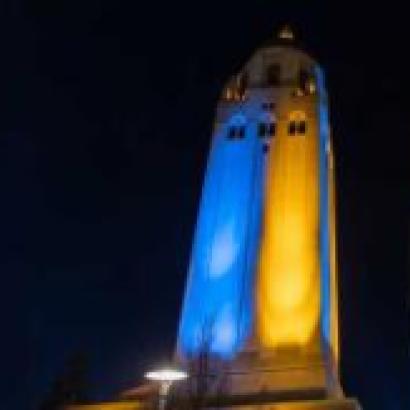 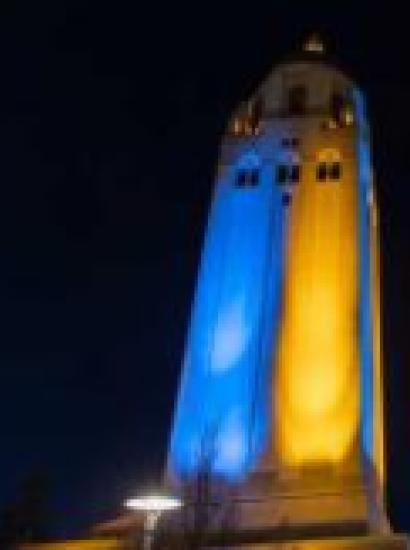 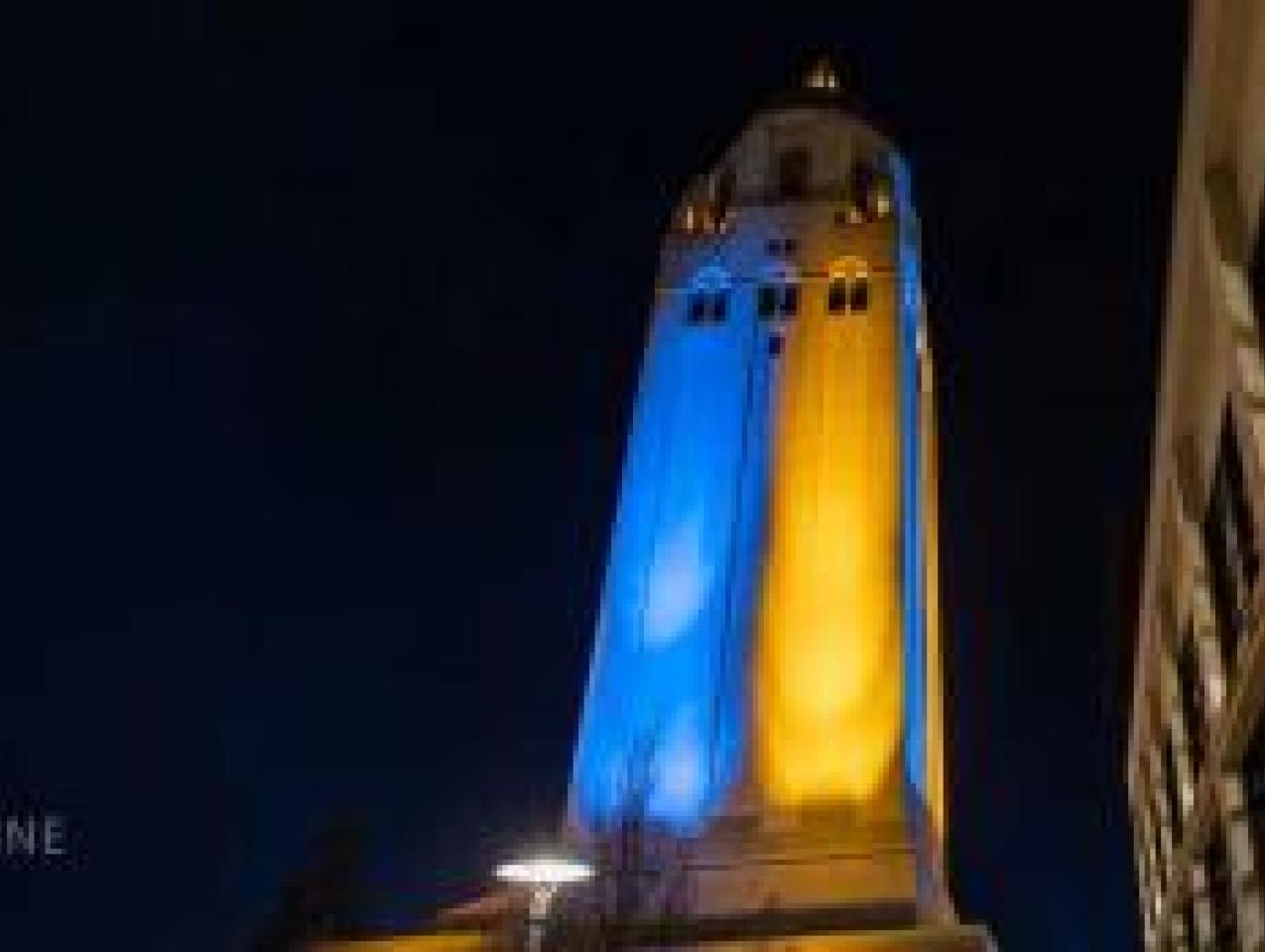 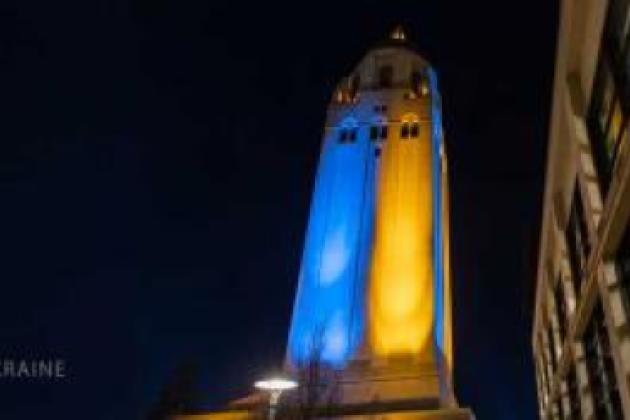 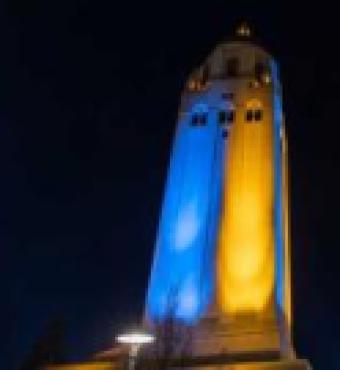 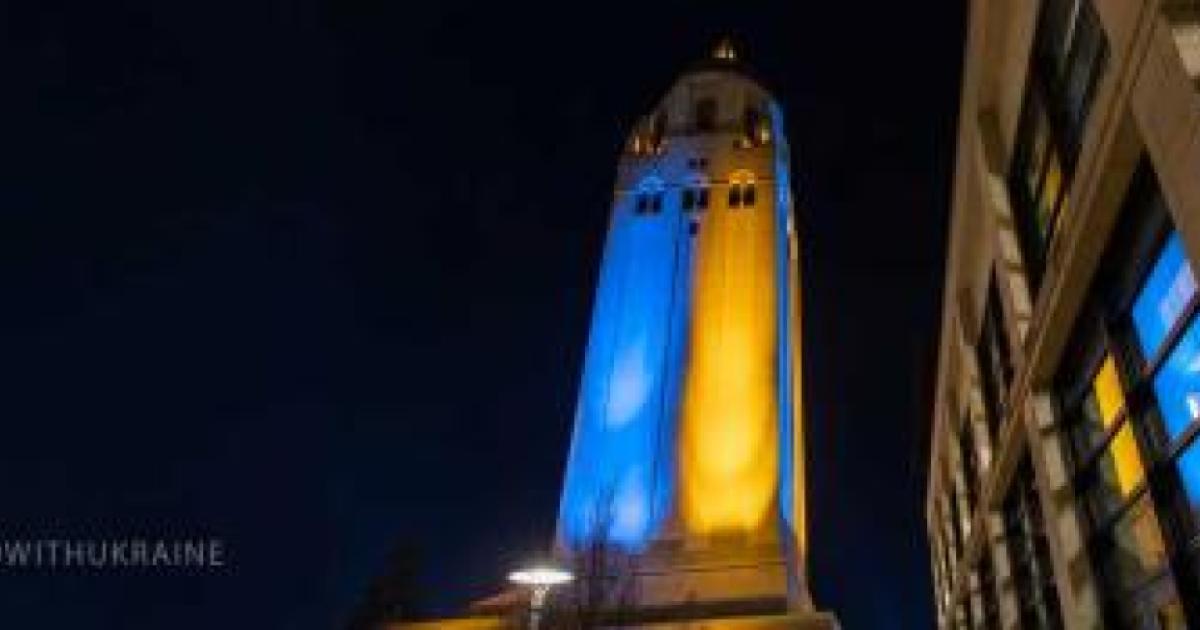 On Friday, March 11, the Hoover Tower was illuminated in the colors of the Ukrainian flag as a show of support for the people of Ukraine. Together, President Tessier-Lavigne and Director Condoleezza Rice consulted and decided that it would be appropriate to have the Hoover Tower, given its historic relation to Ukraine, as a location to show our solidarity with the brave men and women fighting for their country.

The Hoover Library and Archives houses books and archival collections chronicling historical struggles for freedom, and it has long been a beacon for Russian, Ukrainian, and Soviet dissidents. As articulated by Herbert Hoover upon founding the Institution, its mission is “from its records, to recall the voice of experience against the making of war, and by the study of these records and their publication, to recall man's endeavors to make and preserve peace.” Links to the many collections on the pursuit of freedom, democracy and human rights can be found below.

As Americans we know all too well that the road to freedom is long and it is hard. The people of Ukraine have reminded us of how fragile freedom can be, that we must not take it for granted, and that it is worth fighting for.

When you see the Hoover Tower lit up in the colors of blue and yellow, may you be reminded of the hope that resides in the hearts of free peoples, may you think of the lives lost and, most importantly, may you hope for a peaceful outcome to the tragedy that is unfolding. Our hearts go out to the Ukrainian people across the world, and to all those in our own Hoover and Stanford community impacted by the war. We stand with you.

It is our policy not to use illumination of the Hoover Tower to mark catastrophic world events, as there would sadly be too many to accommodate.  We are, however, making an exception in this singular case because of the special place of Ukraine in Hoover’s history, together with the world-shattering nature and scale of this unprovoked war of aggression, and the breathtaking assault it represents on the democratic order, which Hoover, in its founding mission, seeks to safeguard.

The Hoover Institution Library and Archives has rich collections relating to the Ukrainian struggle for freedom throughout the Soviet period, as well as on the development of democracy during its years of independence. Among the major collections are the Alla Yaroshinska papers (the after-effects of Chernobyl Nuclear Catastrophe and the final years of the USSR as seen through Ukrainian eyes), the Iurii Hamretskyi papers (dealing with Ukraine in the early years of Soviet rule), the extensive Taras Kuzio papers (Ukrainian dissidents and exiles and their struggle for independence), the Iurii Kostenko papers (early years of independence and democracy through the eyes of one of the founders of the Narodnyi rukh movement), the Serhii Spasokukotskyi photographs (a visual tour through the Ukrainian path to independence in 1990-1992), the K. Bondarenko papers (on the development of Ukrainian democracy and political culture from the late 1990s through 2012), and the massive Ukrainian subject collection, a large portion of which deals with the development of Ukrainian democracy from 1990 through the present day, including important resources on the origins of the present war. There are also many collections on the struggle for democracy and human rights in Russia and the Soviet Union. These include the papers of such prominent dissident figures as Andrei Siniavskii, Vladimir Bukovskiiand Aleksandr Ginzburg, as well as a portion of the papers of Aleksander Kerensky, the democratic prime minister of the 1917 Provisional Government of Russia, who later spent many years at the Hoover Institution studying the Soviet Union.