Hoover staff member and student curator Alex Kelly (Stanford '19) describes her selection of WWI-era materials for the new exhibition Great Love in the Great War, now on display in the rotunda of the Hoover Tower. Friday, March 4, 2016 3 min read 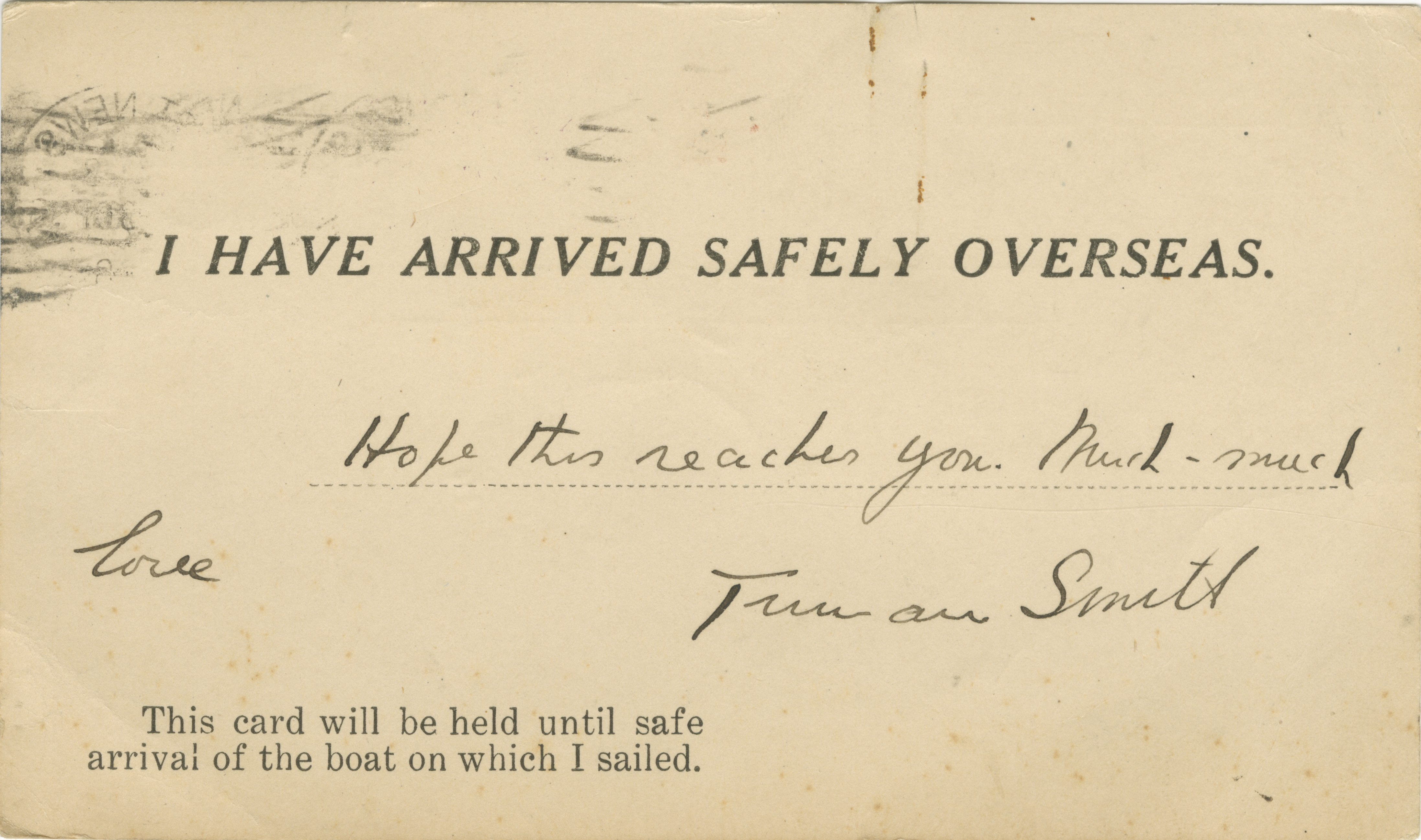 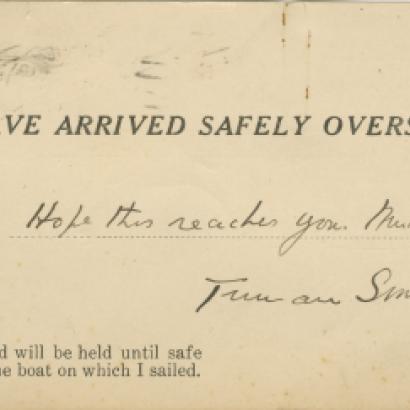 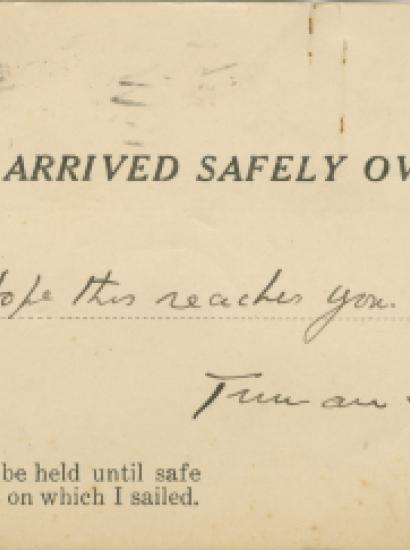 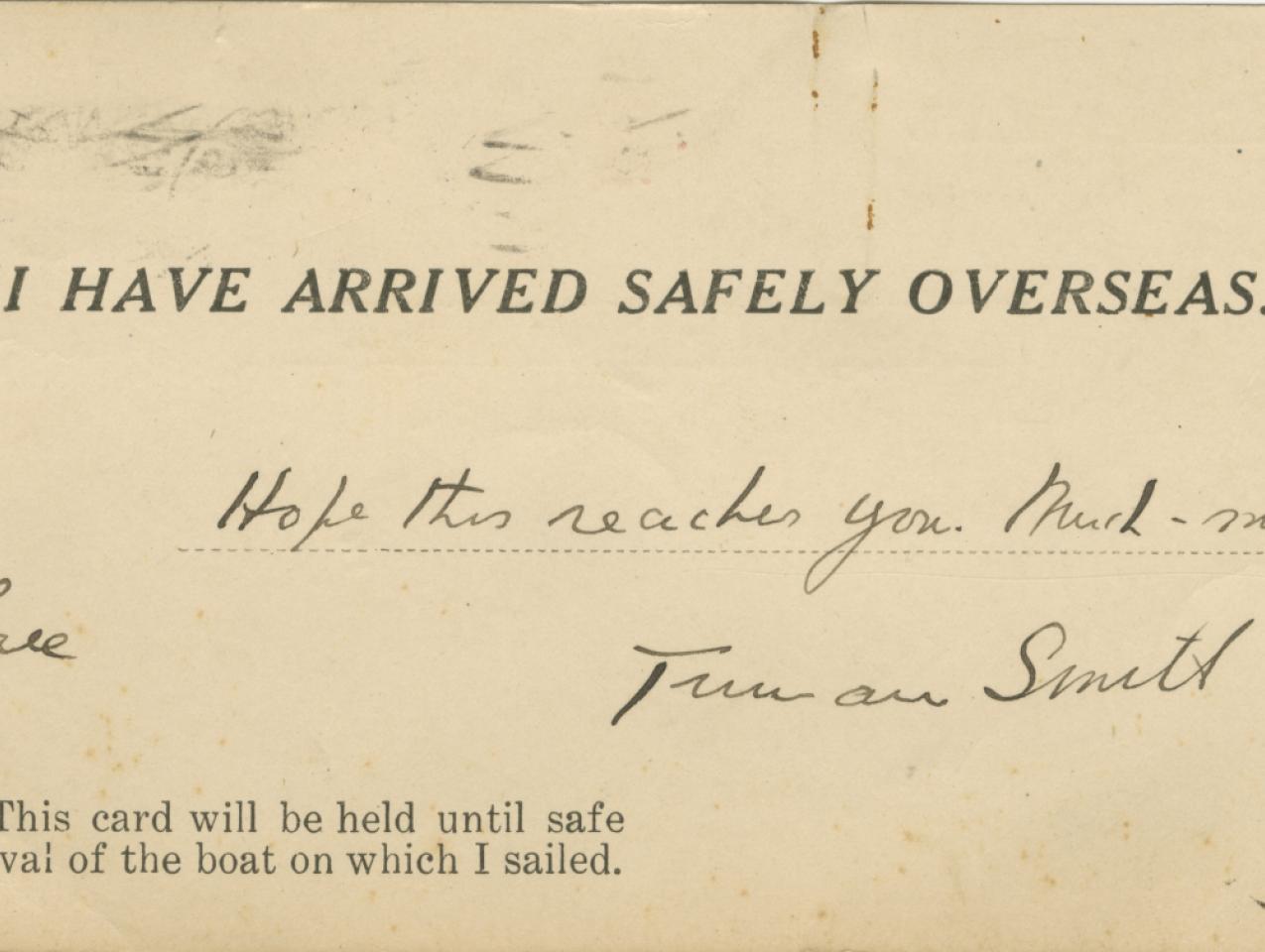 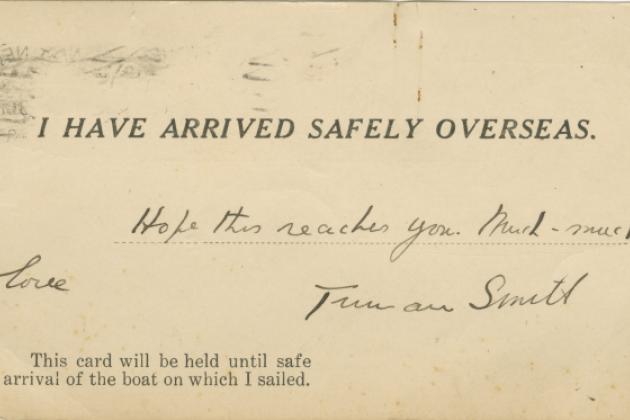 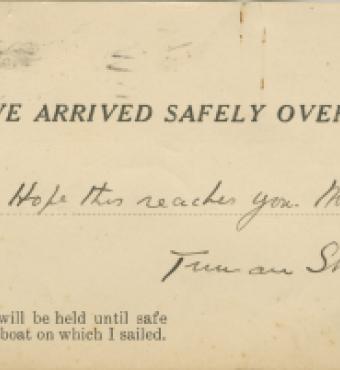 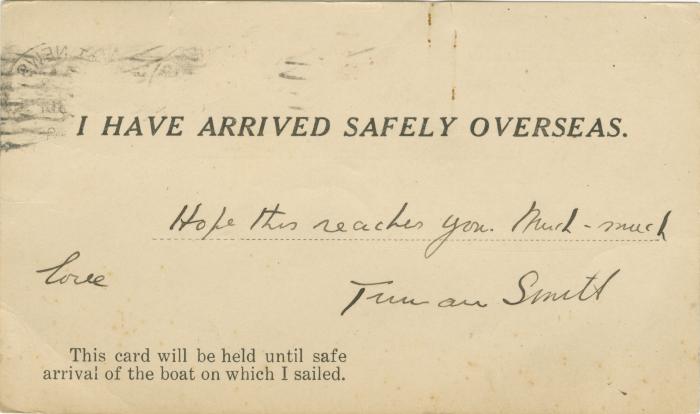 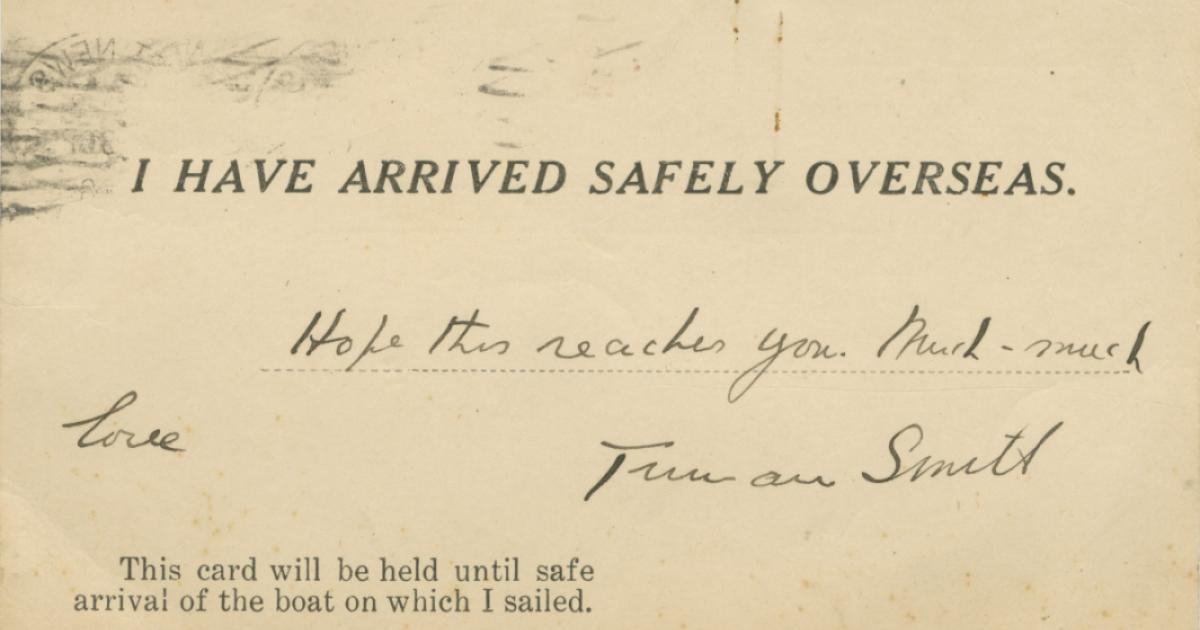 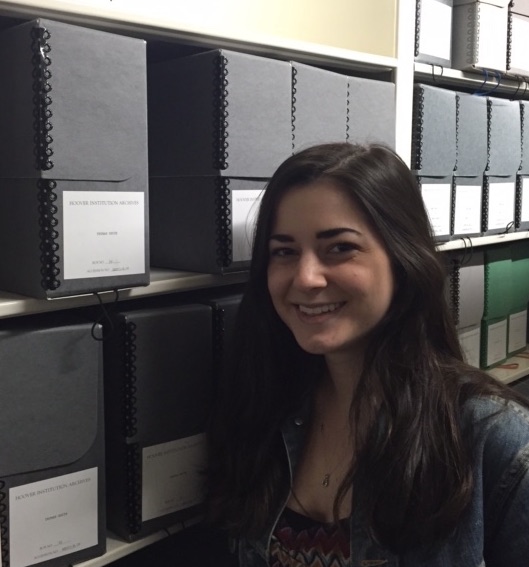 Alex Kelly (Stanford '19) is the curator of the exhibition Great Love in the Great War, which opened in February in the rotunda of the Hoover Tower, and features letters, photographs, and ephemera from the Truman Smith Collection at Hoover Archives. Ms. Kelly began work on the exhibition as part of Professor Mark Braude’s history course “The Great War: World War I and Its Aftermath in Literature, Film, Art, and Memory,” which met at Hoover Library & Archives in November of 2015. Currently, Ms. Kelly works in Hoover Archives, where she is responsible for researching and cataloging rare collection material. Below, she describes her selection and curation of materials to display in the exhibition.

The exhibition Great Love in the Great War began with a project for history professor Mark Braude’s course, “The Great War: WWI and Its Aftermath in Literature, Film, Art, and Memory.” My project involved identifying love letters exchanged between couples during World War I that might eventually be displayed in an exhibit at the Hoover Institution. I began by reviewing a hundred-page packet listing the entire institution’s archival holdings on World War I. After reading through fifty-six pages, marking with an X any collection that might contain correspondence, I realized that “correspondence” could refer to anything from letters to a mother to letters exchanged between officers. I thus resolved to go to the archives and review the materials in person.

The process of gaining access to the archives involved registering, explaining the nature of my research, and receiving an orientation, during which I was instructed on how to pull boxes, how to lay out the documents, and to wear gloves when handling photographs. A Hoover Archives staff member helped me search for posters of World War I sweethearts to supplement the love letters. Initially I selected two collections to review, but knowing only English meant that I had to further narrow my search. As I was returning a box to a shelf designated for my use, Sally DeBauche, the staff member, showed me a search for army wives that she had completed on her computer. Those findings led me to the Truman Smith Collection.

In that collection I discovered the story of Truman and Katharine “Kay” Smith, a newly married couple, and the evolution of their marriage throughout World War I. I thus began my exhibit the same way that Katharine and Truman began the war: with their marriage. In the display I included a photograph of Truman, dated 1915, and a photograph of Kay, dated 1916. Behind these photos a poster from World War I advertising a movie entitled Hearts of the World epitomizes the couple’s love. Next to the poster, I included a brief description of the exhibit, alongside which is a photograph of the couple’s wedding, including their bridal party. Occupying the center of the case is a letter from Truman to Kay in August 1918 that discusses the new marriage and how different it feels for Truman to belong to someone else; he also writes that he now has Kay to “look out for” instead of only himself. That letter, which captures the new love and responsibility felt by the two, is one of the items from Truman’s service in France, which lasted from April through November 1918. This section of the exhibition also features a photograph of Truman in uniform and a picture of Kay wearing her Red Cross Emergency Canteen uniform, showing that Truman was not the only member of the couple who participated in wartime service. As Truman battled the Germans in France, Kay likely fought diseases such as influenza on the home front. This wall display demonstrates how the tentacles of war permeated all aspects of Truman’s and Kay’s early life together. 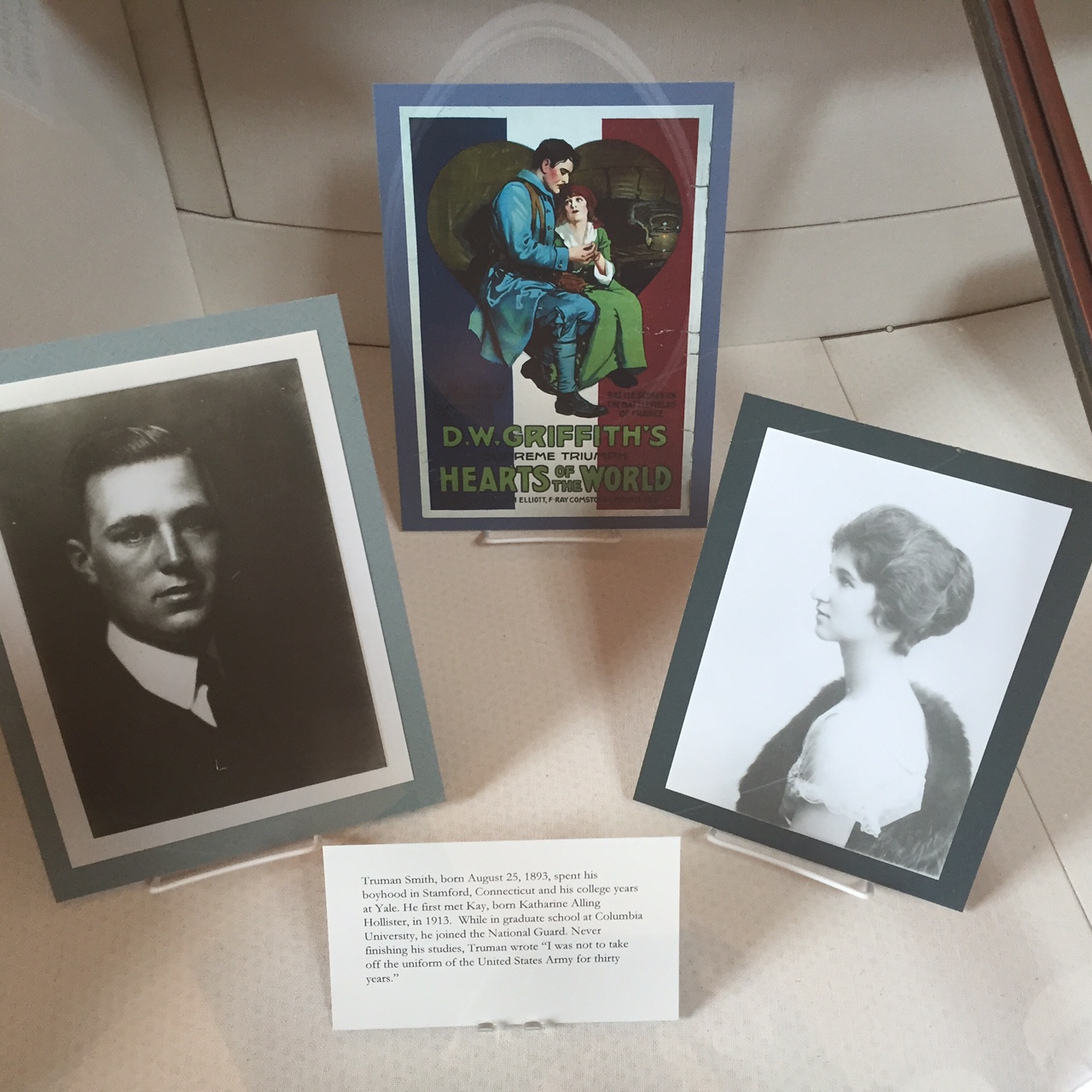 The new display in Hoover Tower features photographs of Truman Smith and his wife, Kay

The second side of the display case also includes wartime materials, justified by  the fact that, during this time the Great War was the couple’s marriage. The viewer is greeted by an enlarged postcard, depicting Coblenz, where Truman was stationed in Germany beginning in late 1918. Further inspection reveals a small “x” marked on the card by Truman, perhaps signaling to his wife where he was stationed. Below this postcard is another postcard, this one stating that “I have arrived safely overseas,” sent to Kay on Truman’s arrival in Germany. The couple occasionally requested a special pass with which Kay was able to visit her husband at headquarters; next to the postcards is an example of such a pass. The central letter in the case mentions his time at the front in France and addresses the unhappiness Kay was facing on the home front. Although the letter emphasizes the stress the two faced due to the war, their love endures. On the basis of my analysis of Truman’s accounts of his war service in his memoir, I suggest that this letter may be misdated. At the time of the actual date of the letter, January 1918, Truman had not yet been transferred to France; by January 1919, however, he would have just completed his service on the front lines in France.

The final display area focuses on the postwar period. The first item is a letter from Truman to Kay, beginning with the words that marked the end of their painful separation: “Peace was signed yesterday.”  Next to Truman’s letter is a photo of him and their daughter (Kätchen, addressed as Alling in the photographs) and a photo of his wife with Kätchen. The case also contains a condolence letter from the White House to Kay following Truman’s death in 1970. Below the letter of condolence is a small card announcing Kay’s death in 1992. This final display case covers the couple’s postwar life together, reinforcing the themes of light prevailing over darkness and love prevailing over war. Their marriage, which lasted fifty-three years, exemplifies enduring love. 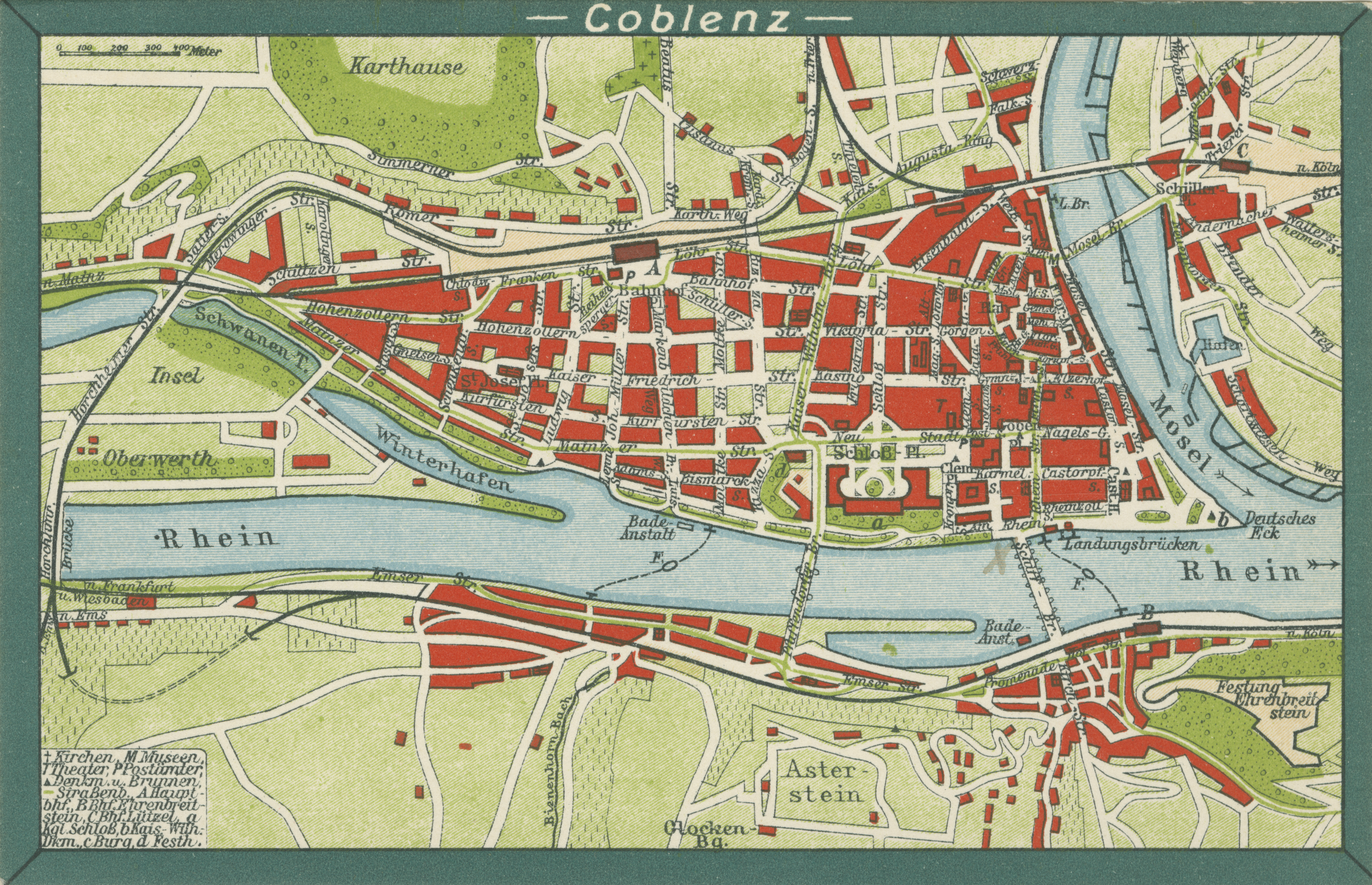 A postcard of Coblenz, Germany, sent from Truman Smith to his wife, Kay