The second annual Hoover Institution workshop on modern China was held during August 4-5, 2014. Organized by archives staff, the workshop featured eight scholars from Europe, East Asia, and the United States who have done research in Hoover’s collections. Workshop attendees presented their research to the Hoover and Stanford community, with a keynote from University of California-San Diego professor Joseph Esherick. 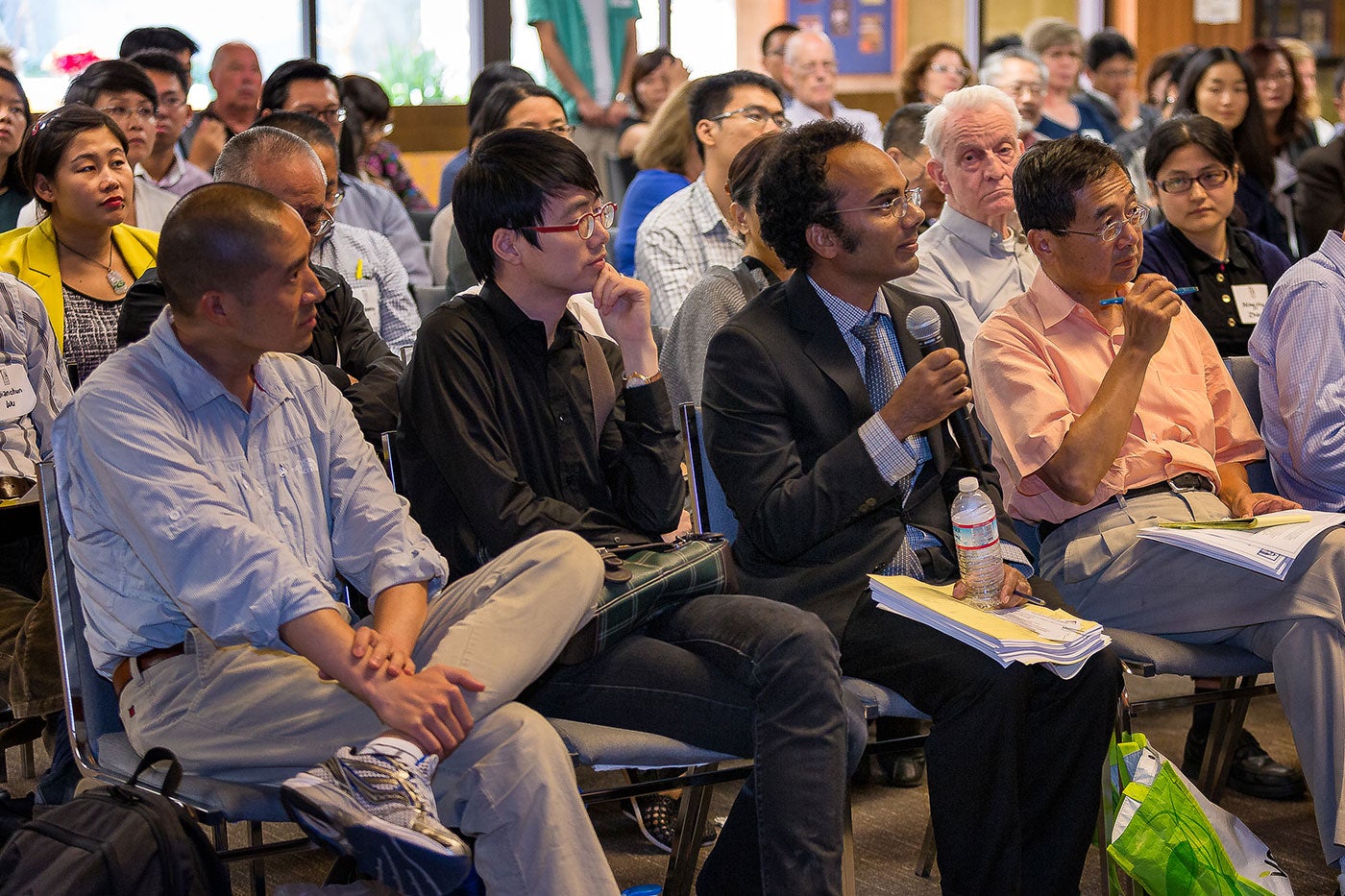 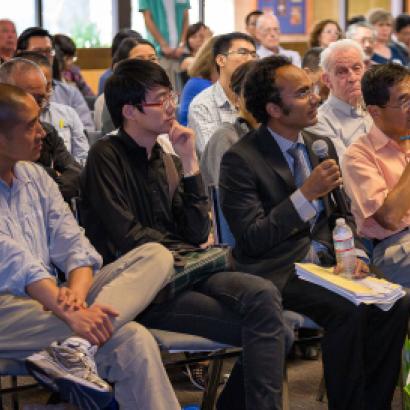 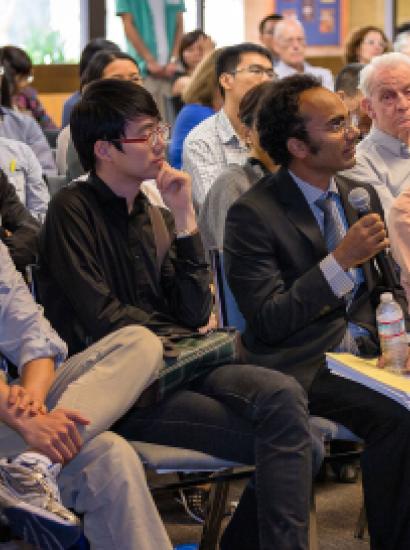 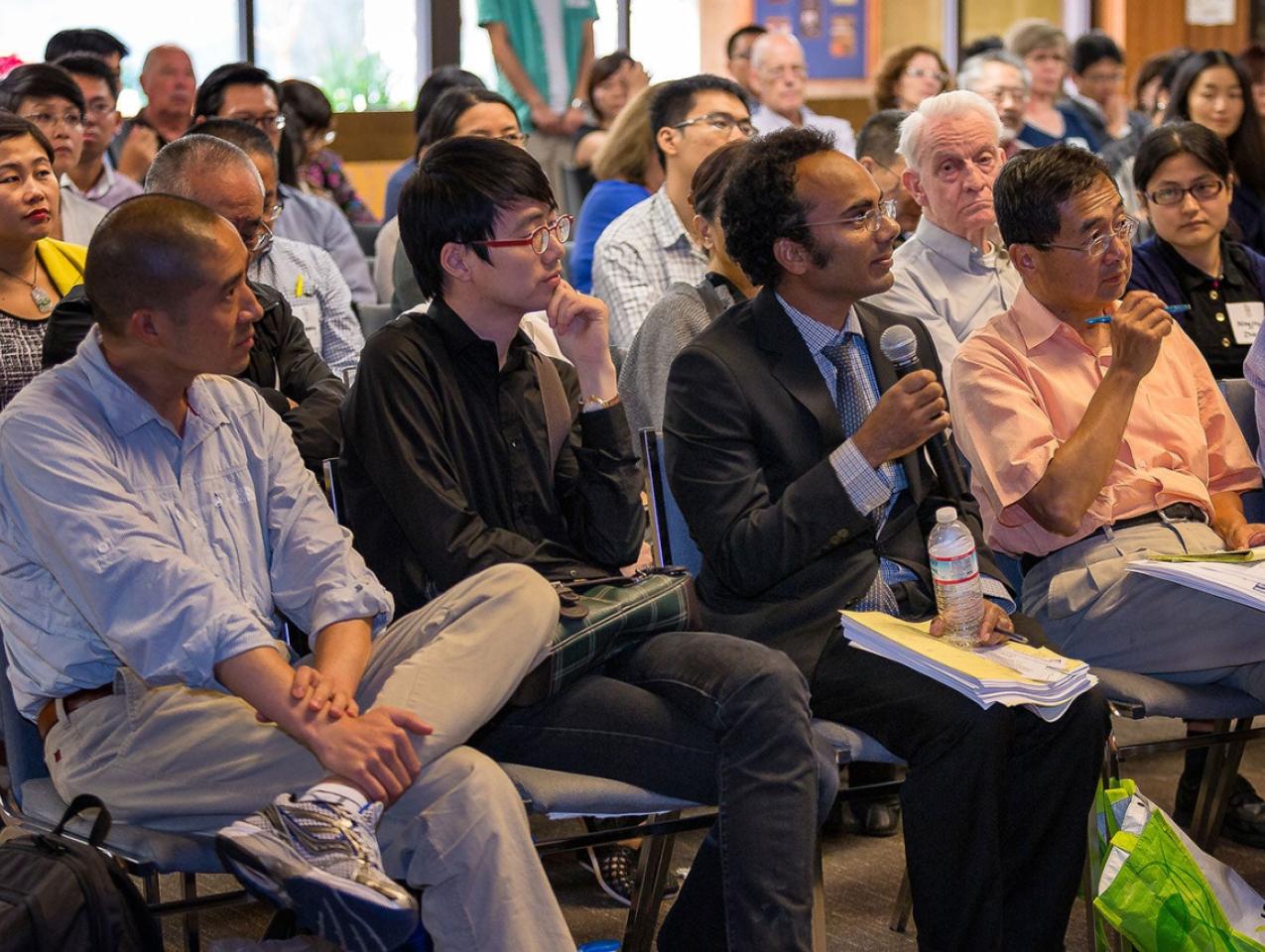 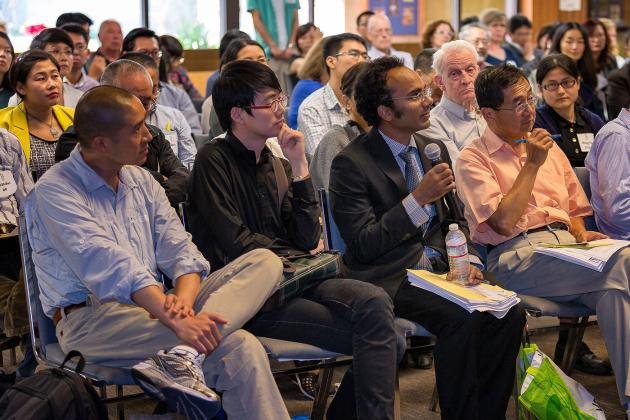 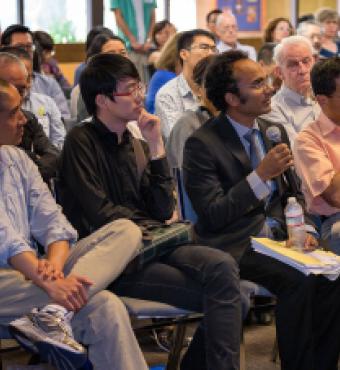 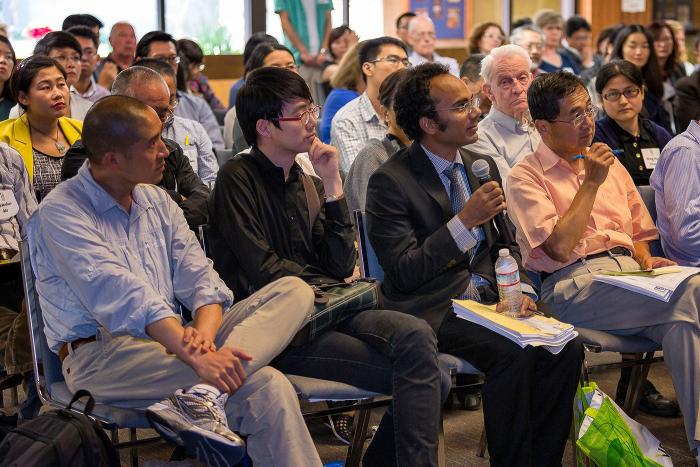 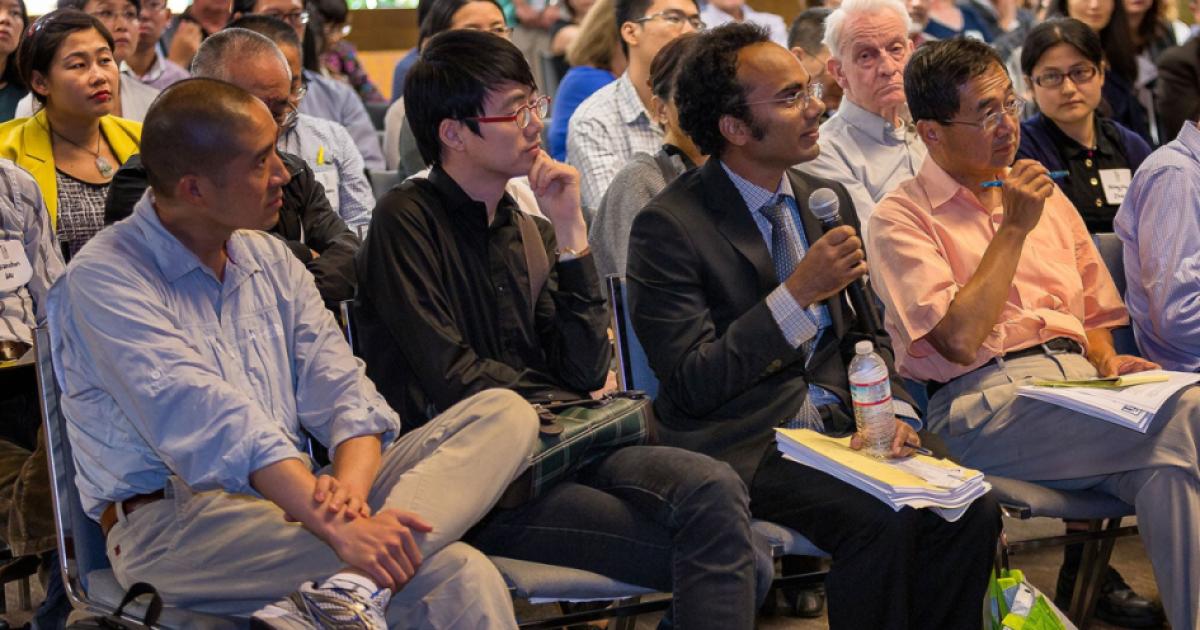 The second annual Hoover Institution workshop on modern China was held during August 4-5, 2014. Organized by archives staff, the workshop featured eight scholars from Europe, East Asia, and the United States who have done research in Hoover’s collections. Workshop attendees presented their research to the Hoover and Stanford community: the workshop participants, and descriptions of their presentations, are given below:

Joseph Esherick (University of California-San Diego) began the workshop with his keynote lecture, “1943: China at the Crossroads.” Based on a newly edited volume authored by a dozen scholars, Esherick’s lecture featured many collections from the Hoover Institution Archives, including the personal papers of T .V. Soong, H. H. Kung, Joseph Stilwell, and Albert Wedemeyer; the personal diaries of Chiang Kai-shek; and the KMT Party Archives. Esherick explained how the Communists in China, who, at the beginning of World War II, were a ragtag band of survivors of the disastrous Long March holed up in the caves of Yan’an, had developed into in an army of a million men by the end of the war; Chiang Kai-shek’s Nationalist government, by contrast, was increasingly viewed as an inept, corrupt, self-serving authoritarian regime.

Hans Van de Ven (University of Cambridge) traced the Chinese Maritime Customs Service’s history as it confronted the outbreak of the Sino-Japanese War in 1937. His presentation described the service’s partition after Pearl Harbor into a Nationalist Customs Service in the wartime capital of Chongqing and a Japanese-backed Wang Jingwei Customs Service in Nanjing: the service’s resistance to being taken over by Chiang Kai-shek’s Secret Service; its fight to resurrect itself after the end of the war; and its preparation for the communist takeover. During a period of extraordinary violence and extreme volatility, the service was able to maintain its unity and  struggle for a cosmopolitan China with open borders and fair markets; later, however, it succumbed to the pressures of the time and became engulfed by corruption. The Hoover Archives houses rich collections related to the above complex and important issues, including the personal papers of Walter Judd, Stanley Hornbeck, and Charles M. Cooke.

Ch’i Hsi-sheng (Hong Kong University of Science and Technology) discussed the role of the United States in Nationalist Chinese government’s diplomatic perspective before the Pacific War, revisiting several key events that occurred between the Marco Polo Bridge Incident of 1937 and Pearl Harbor, culminating in the alliance between China and the United States. The Hoover Archives’ rich holdings of KMT party materials and on US-China relations during World War II, such as the personal papers of Lauchlin Currie, Claire Chennault, T. V. Soong, and H. H. Kung, provide crucial sources of materials with which to expand on Professor Ch’i’s important research.

In his presentation, titled “Rethinking the History of the PRC,” Klaus Mühlhahn (Freie Universität Berlin) gave an overview of the burgeoning historiography of the People’s Republic of China, especially the early period, between 1949 and 1978, and suggested how contemporary scholars might integrate such work into narratives of the Chinese past and present. His talk highlighted areas in which reconsidering PRC history could be especially fruitful: violence, transnational flows, governance, and social transformation. Professor Mühlhahn found the Communist Chinese Political Movement Collection, the Chinese Cultural Revolution Collection, and the Zhongguo Gong Chan Dang Issuances at the Hoover Archives of particular value to his research.

By carefully sifting through Chiang Kai-shek’s personal diaries and the Hoover Archives’ numerous collections relating to the Korean War, such as the personal papers of Haydon Boatner, Robert Murphy, and Christopher Emmet, Cheng David Chang (Hong Kong University of Science and Technology) revisited the controversy surrounding prisoners of war after the Korean War Armistice Agreement was signed on July 1953, uncovering clandestine collaboration among US psychological warfare personnel, anticommunist prisoners, and Chiang Kai-shek’s agents that derailed the Chinese Communists’ “explanations” and secured a major propaganda victory for the United States and Taiwan. Whereas 14,704 allegedly anticommunist and antirepatriation Chinese prisoners had been transferred to the neutral zone in Panmunjom, 6,670 pro-PRC prisoners had been repatriated back to China. The antirepatriation prisoners,  placed in the custody of Indian troops,  were to undergo “explanations” made by PRC representatives., who also attempted to persuade prisoners to return home but were frustrated by well-organized resistance. The result was a major blow to the Communists: only 440 Chinese prisoners sought repatriation; the vast majority, more than 14,200 men, went to Taiwan in early 1954.

Drawing on newly declassified material from Beijing and Taiwan, as well as the personal diaries of Chiang Kai-shek, the Bruce Walker papers, and the American Emergency Committee for Tibetan Refugees Records, Sulmaan Khan (Tufts University) described how the nonstate actors who peopled the Tibetan frontier made a dramatic impact on the nature and diplomacy of the PRC. The nomads in search of grasslands for their herds, the traders swapping goods and gossip in the markets of the Himalayas, the spies who brought anticommunist propaganda to what the PRC saw as its sovereign territory, the people caught in the maelstrom of rebellion and counterinsurgency rarely take center stage in stories of Cold War China. Yet between 1959, when the Dalai Lama fled into exile, and 1962, when the Sino-Indian entente came to a bitter end, this area weighed heavily on the official minds of the PRC. Nonstate actors forced the PRC to deal with something historians had not yet suspected: state weakness. In dealing with those actors, the PRC made a transition from empire lite to a harder, more heavy-handed imperial structure. Events in the Tibetan borderlands, as Khan suggested, altered China’s relations with its Himalayan neighbors and, in doing so, opened up new possibilities for China’s policy toward the third world.

Jing Tsu (Yale University) raised fresh perspectives on the Chinese writing system. Extensively consulting the Hoover Archives’ KMT Records, Tsu argued that, in the late nineteenth century, in the spirit of scientific thinking, language reformers, inventors, and pedagogues seized on the Chinese character script as a possible medium of technological infrastructure.  Swayed by the idea that a universal language in the modern world depended on quick access instead of cultural prestige, they aimed to reorganize the Chinese script  to match the alphabetic writing system in logic and efficiency.  At the center of this movement was the growing field of "Chinese character index method" (Hanzi jianzifa) that gained momentum in the 1920s and 1930s. It studied and proposed different ways in which the Chinese characters could be accurately and logically arranged, disassembled, and recomposed, paving the way for indigenous typewriting technology, classification systems, library cataloging systems, and--most recently--Chinese input methods in competing software. A revolution has been under way that has aimed, for more than 130 years, to supersede alphabetization.

Joshua Hill (Ohio University) closed this year’s summer workshop by discussing the elections in early Nationalist China from the perspective of modern China’s democratization process and intellectual history. Although warfare determined both the rise and the fall of the KMT government on the mainland, many KMT party thinkers and officials worked to conceptualize the architecture of civilian rule. Voting and elections were central to their vision for the Republic of China after the (eventual) end of tutelary rule. Heavily relying on the Hoover Archives’ KMT Records, Hill explored the decades-long attempts to create a specifically KMT style of elections that would harmonize Sun Yat-sen's philosophy with the pre-1927 Republic's difficult electoral history and the alternative systems of voting that emerged in interwar Europe. Although the ultimate product of these discussions--the election law used for the 1947 National Assembly elections--did not prove long-lasting, the process of drafting the law reflected important changes in how the relationship of the state and the individual was conceptualized in early and mid-twentieth-century China.

Listen to the talks from the workshop:

Listen to the talks from the workshop