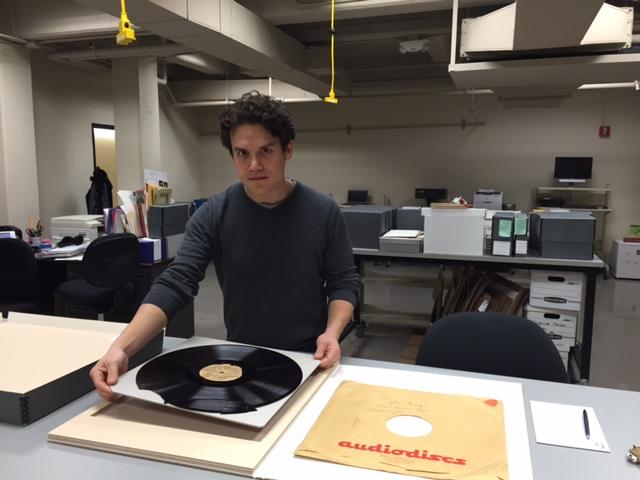 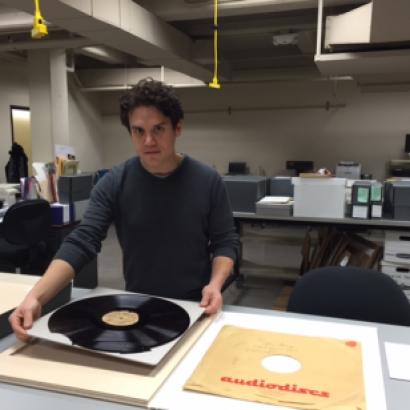 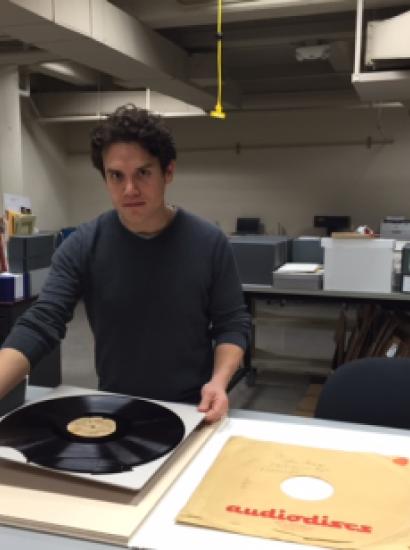 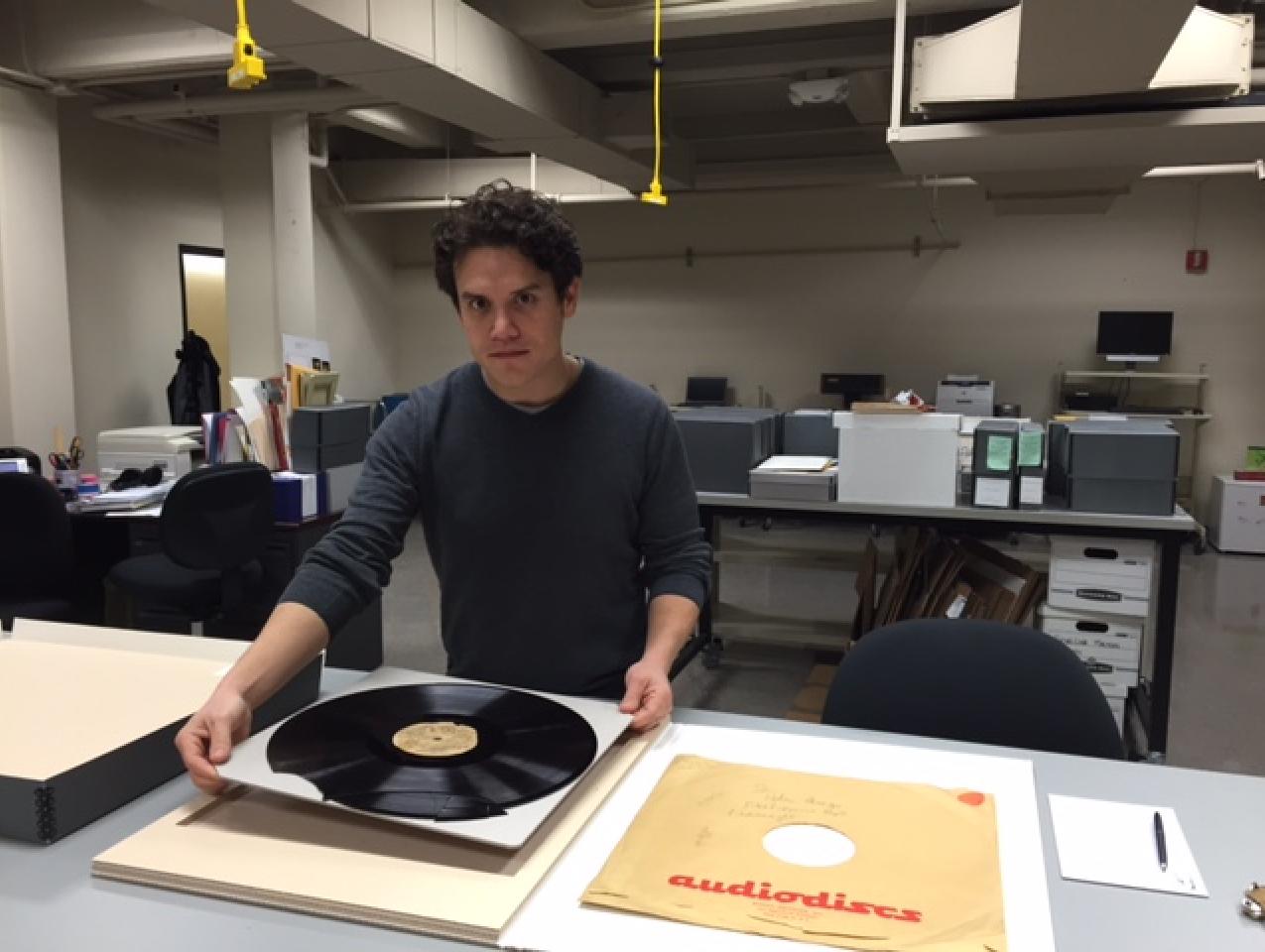 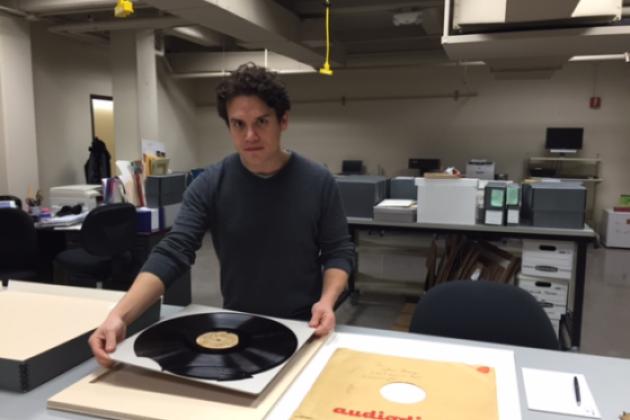 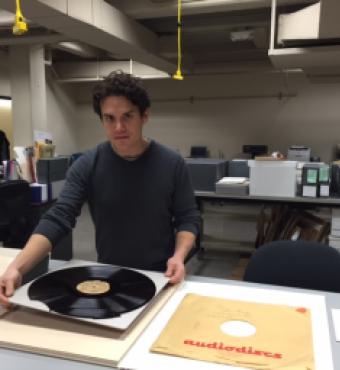 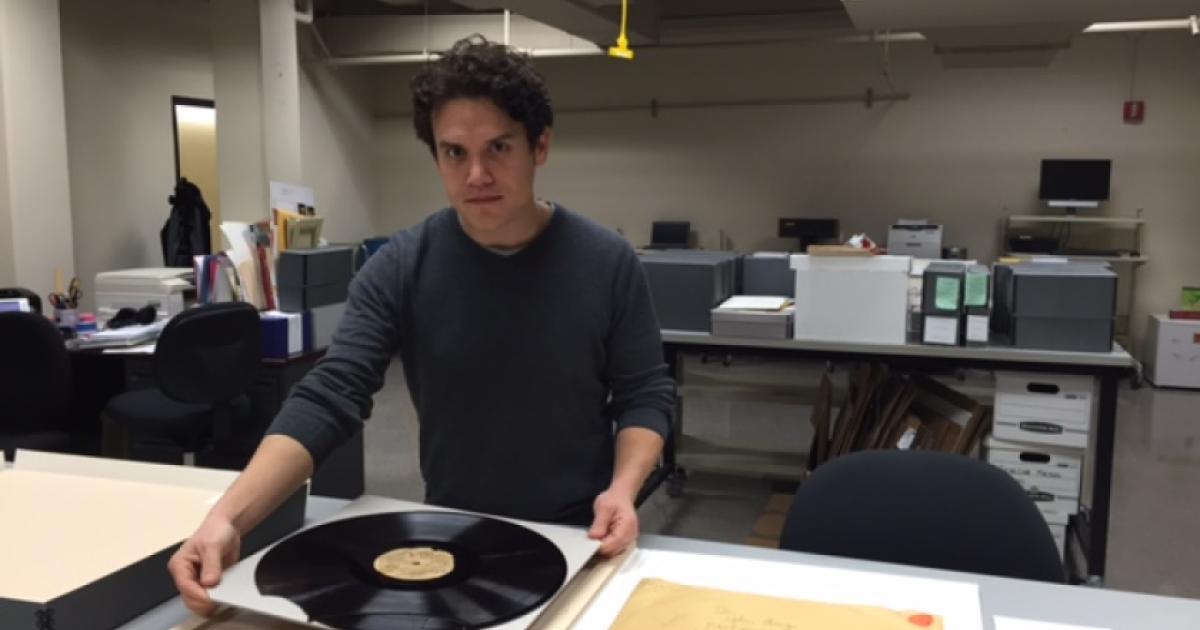 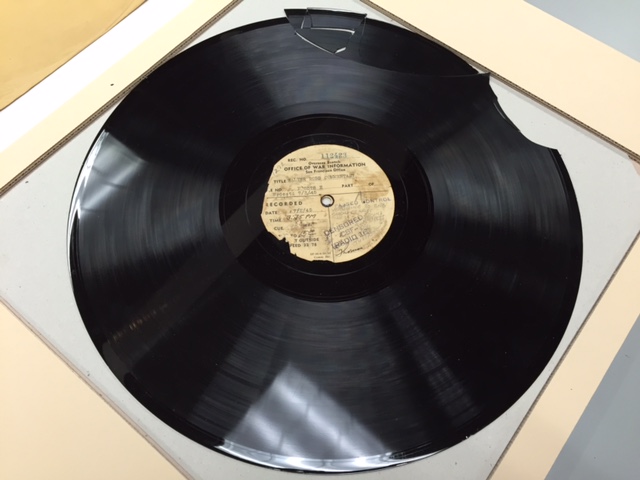 Many of the black lacquer discs in Hoover's sound recordings collection, including this disc recorded by the Office of War Information, contain content that was censored during wartime. 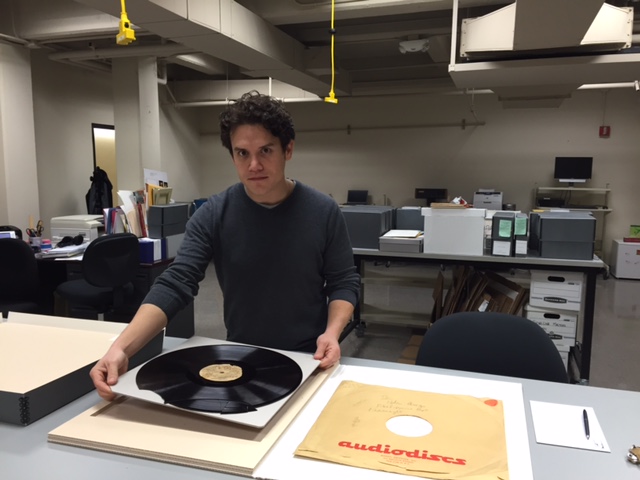 In October Jim Sam, Digital Migration Analyst at the Hoover Library & Archives, delivered a convention presentation concerning the preservation and digitization of the valuable and fragile WWII-era sound recordings held at the Hoover Archives. Sam and his colleagues, Brandon Burke and Rayan Ghazal, are setting new standards for the care of lacquer discs that are notoriously susceptible to disintegration. Below, Sam discusses innovations that Hoover has developed for the preservation of these rare, unique, and endangered recordings.

How do you ensure enduring access to World War II-era radio? That was the crux of the talk I gave at the 139th Audio Engineering Society convention, held at New York City’s Javits Center in late October. Put another way, the talk was on how to deal with the most fragile sound recordings there are: lacquer discs, the predecessor to audio tape. These are items that can literally crack in your hand with just the slightest wrong move.

As a featured segment of the convention’s Archiving & Restoration track, the audience was an international gathering of audio archivists, techs, vendors, and students.  Some other speakers in the track were affiliated with Sony, Lawrence Berkeley National Laboratory, Library of Congress, and the Internet Archive.

Asked by the track’s curator, an NYU professor, I was apt to speak for a few reasons: to teach, to further the Hoover brand as a leader in the field and an example of real-world best practices, to advocate for a commercial cleaning solution based on state-of-the-art research (we currently have to go the DIY route), and to show off the Hoover-designed housing for broken discs.

Why are the discs so fragile? Unlike an LP record, these discs have multiple parts. The lacquer coating becomes brittle over time and can crack, break, or delaminate from the base. And even worse: during the war the discs were made with glass bases instead of the more common (and more durable) aluminum bases. With a 16-inch diameter, a brittle coating, a glass base, and each disc carrying content not available outside Hoover, perhaps it is easy to understand why the stakes are high.  Without action, these recordings will be lost to history.

To deal with a disc that exhibits any of these problems, our colleagues Brandon Burke and Rayan Ghazal designed a long-term housing solution out of necessity, as no similar product exists. We now have a space-efficient housing that will keep the parts of the disc safe until they can be read by bleeding-edge 3D-optical scanning machines.

So what content do we have that’s on these incredibly unstable discs?

Our holdings include, but are not limited to: NBC coverage of the founding of the United Nations, live coverage of the Bikini Atoll atomic bomb tests, Radio Tokyo and Voice of China broadcasts, early programs from Radio Free Europe, recordings of General Joseph W. Stilwell, and the earliest recordings from the Commonwealth Club of California, such as Cecil B. DeMille’s 1945 talk “Motion Pictures and International Relations.”

You can hear a few of these recordings on our SoundCloud page https://soundcloud.com/hoover-archives and more of them in the Archives’ reading room.

For more on the digitization process, please see the slideshow we have on our web site at http://www.hoover.org/slideshows/lacquer-disc-preservation-hoover-archives.