The Hoover Library recently acquired a rare print run of The Resister: a far-right dissident magazine purportedly published by the “Special Forces Underground,” a clandestine group of radical extremists in the Green Berets, an elite fighting unit within the US Army. Tuesday, August 18, 2015 3 min read 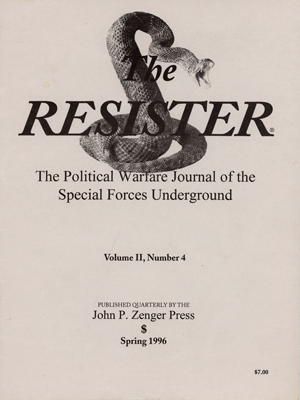 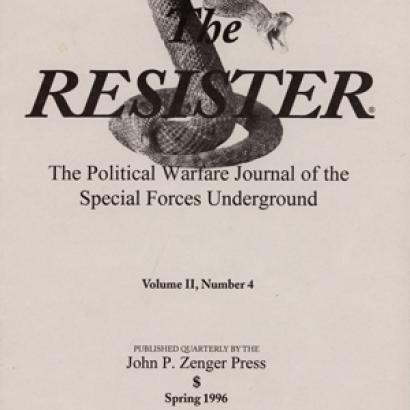 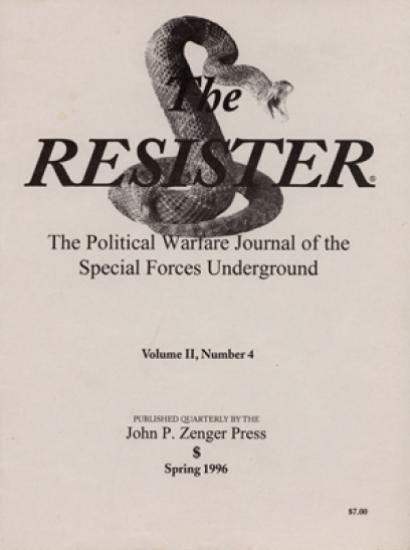 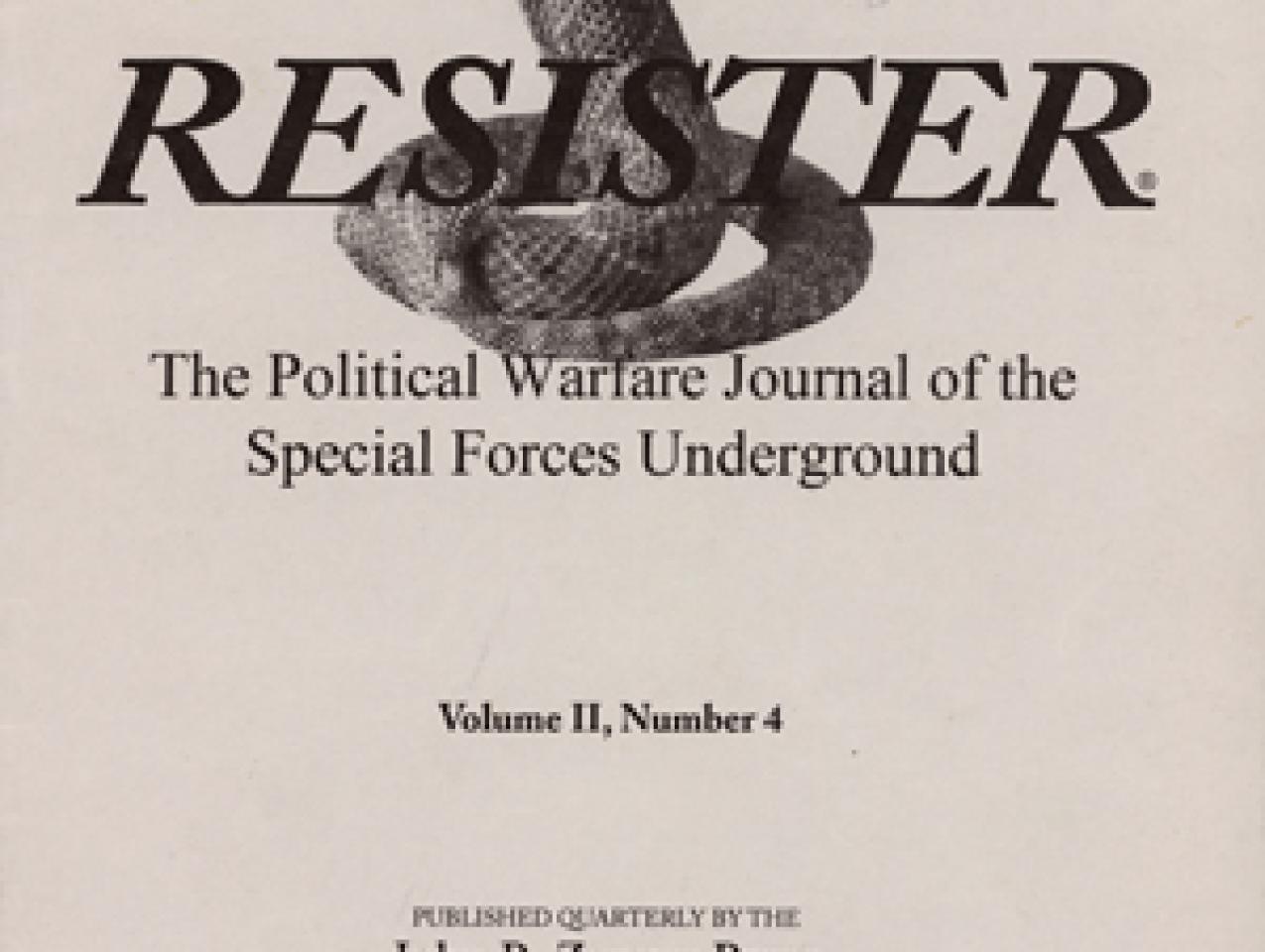 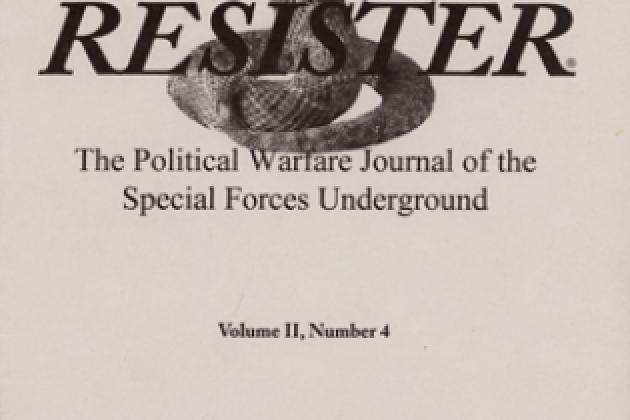 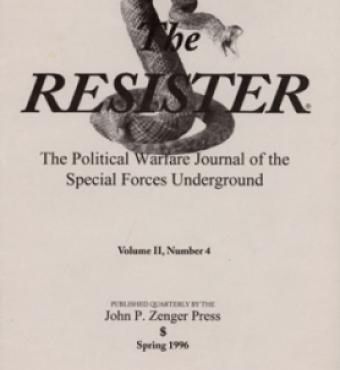 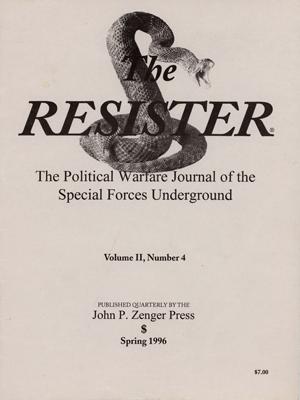 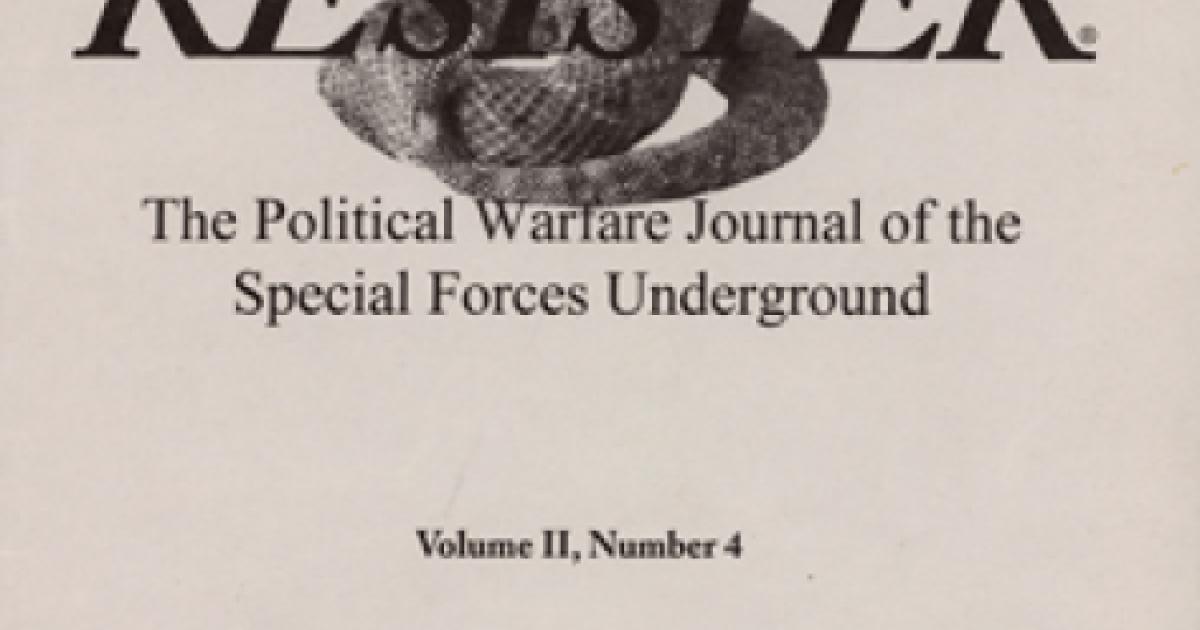 The magazine’s masthead features a coiled rattlesnake, a traditional symbol of the American Revolution. Inside, the publication features assessments of current events, editorials, quotations by Thomas Jefferson and John Locke, and personal advertisements.

The Hoover Library recently acquired a rare print run of The Resister: a far-right dissident magazine purportedly published by the “Special Forces Underground,” a clandestine group of radical extremists in the Green Berets, an elite fighting unit within the US Army. Our acquisition of these rare copies of the Special Forces underground magazine The Resister shows Hoover’s dedication to collecting materials that speak to the views and experiences of soldiers involved in modern conflict—even when those soldiers voice radical dissent from the mainstream thinking of the armies they serve. The ideas expressed in The Resister illuminate almost all of the internal controversies of the US military in the 1990s: the viability of peacekeeping missions, for example, and the presence of women, gays, and minorities in the ranks. There’s no doubt researchers of late twentieth-century military culture will find these magazines incredibly informative.

Since the first edition was published in the winter of 1993, The Resister’s production, editorship, and readership have been engulfed in mystery—which perhaps could be expected of a periodical produced by and for an audience of Special Forces soldiers trained in unconventional warfare and in avoiding detection by enemies and authorities. Its earliest iteration appeared online; by 1996, however, the publication (the circulation of which remains unknown) began appearing in bound, print form. Initially existing on the periphery of the military community, the magazine made national news in April 1995 when a copy was found in the car of Oklahoma City bomber Timothy McVeigh (who had served in the US Army but had been denied entry into Special Forces). Using the fax signature on McVeigh’s copy of the publication, federal authorities traced the editorship of the “political warfare journal” to Special Forces sergeant first class Steven M. Barry, whose editorials in the magazine appeared under the pen name of  “J.F.A. Davidson.” Eleven days after the Oklahoma City bombing, Barry—with his face obscured and his voice electronically altered—appeared on the CBS TV news show 60 Minutes.

In that and subsequent interviews, Barry refused to release the numbers or names of soldiers affiliated with his radical militia movement. Emphasizing that The Resister expressed controversial opinions but did not release confidential or classified military information, Barry claimed his First Amendment right to publish the right-wing views of the elite force’s underground. Barry explained that his work on the magazine began in February 1993 in reaction to the bloody raid on David Koresh’s compound in Waco, Texas. His disillusion with US military interventions increased with the US invasion of Haiti in 1994; The Resister claimed that a group of Green Berets sent to Haiti subverted American foreign policy by advising ousted, anti-Aristide military personnel on how to hide weapons and defy UN and US attempts to disarm and neutralize the resistance. The magazine claimed that through American efforts such as armed intervention in Haiti, “The US military has become slave service for the wealth redistribution schemes of internationalist and gangs of weeping do-gooder mystics. One need simply note the circling of media carrion eaters to predict in which third world toilet these altruists will flush hundreds of millions of US tax dollars and the lives of US servicemen. Peacekeeping is a monumental fraud.” By subverting the corrupt orders given to them, the “Special Forces Underground” was convinced it was exhibiting true patriotism.

The “true patriotism” of the underground group included views vehemently misogynistic, racist, and homophobic. At the end of 1995, the white supremacist views of The Resister came under scrutiny after three white army paratroopers were arrested for the murders of two African American citizens of Fayetteville, North Carolina: home of Fort Bragg, the primary training facility for Green Berets, and known to both locals and soldiers as “Fayettenam.” The murders’ possible link to skinhead extremist groups within the army gave rise to a branch-wide investigation; all available copies of The Resister were gathered and sent to the army’s staff judge advocate for review. The judge advocate ruled that the magazine did not violate army guidelines or regulations nor did it breach security.

Despite the army’s ruling, the House National Security Committee called for a federal investigation of extremist activity in the military (in The Resister, Barry called it a “witch hunt”) and convened a hearing in June 1996. Although the findings were inconclusive, Barry was demoted and retired the following year. After his retirement, Barry continued editing and distributing The Resister. As the newly acquired copies in the Hoover Archives attest, following Barry’s demotion the magazine became increasingly extremist and racist; by 1998, The Resister featured full-page advertisements for the neo-Nazi National Alliance. To date, the military still lacks substantial demographics for the “Special Forces Underground.”