The Hoover Institution and Stanford University’s Bill Lane Center for the American West, in partnership with YouGov, have conducted a new Golden State Poll of registered voters in anticipation of the gubernatorial recall election on Tuesday, September 14, 2021. YouGov interviewed 2,043 registered voters between August 27 and September 1, 2021. Results reported below are based on 1,618 likely voters who had received their ballots and said they had already returned their ballots or would definitely do so before election day. 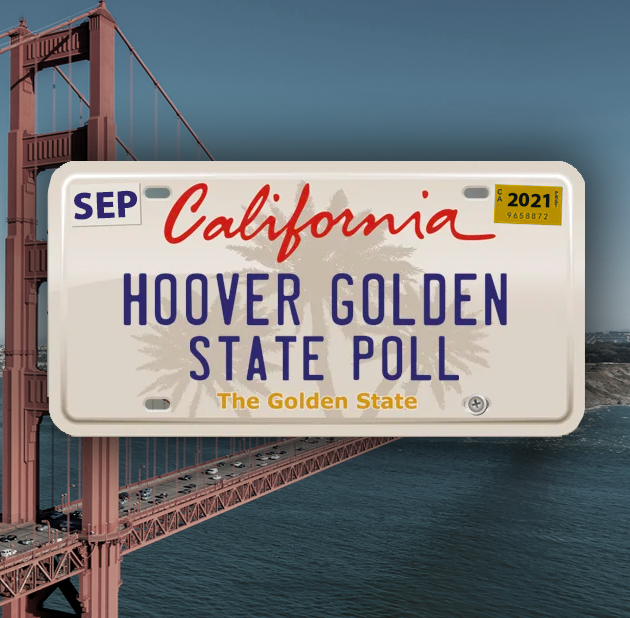 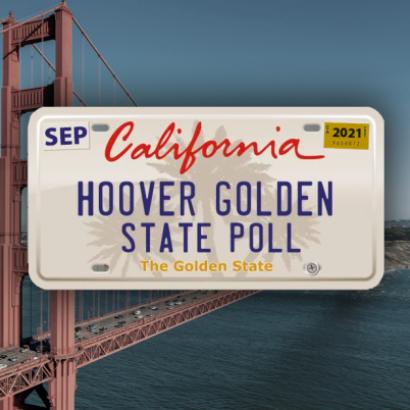 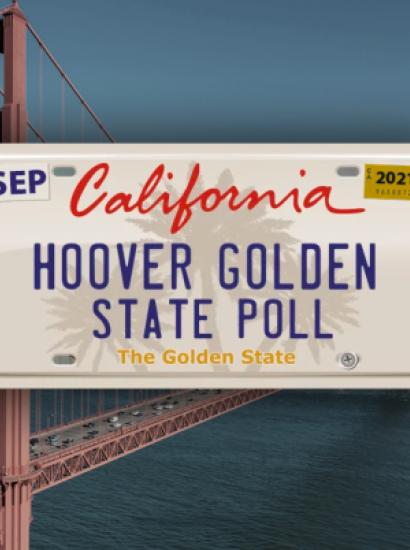 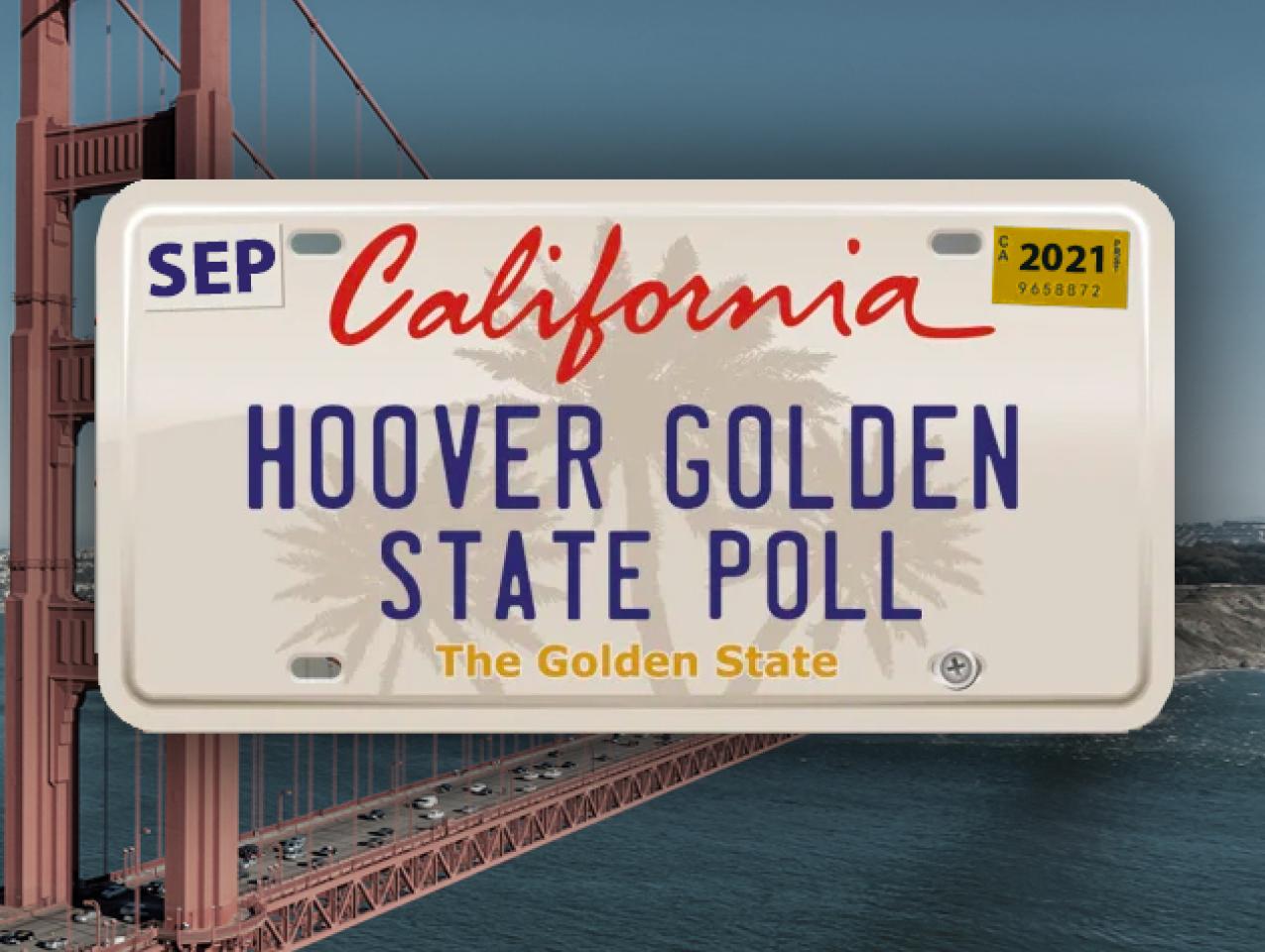 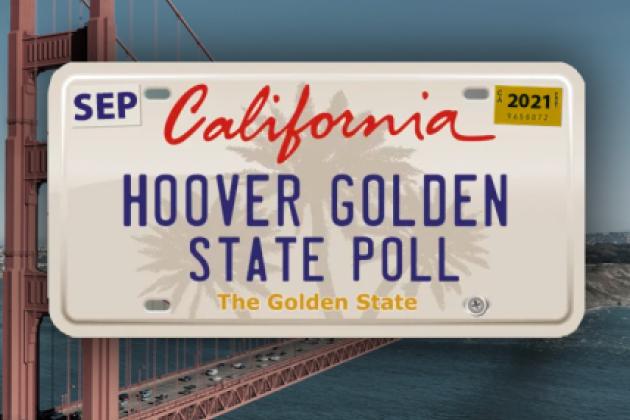 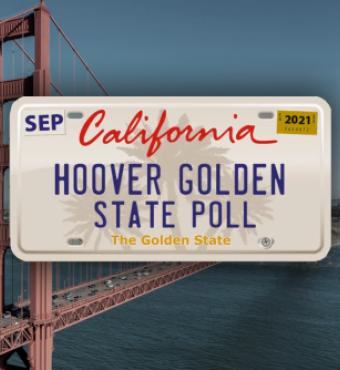 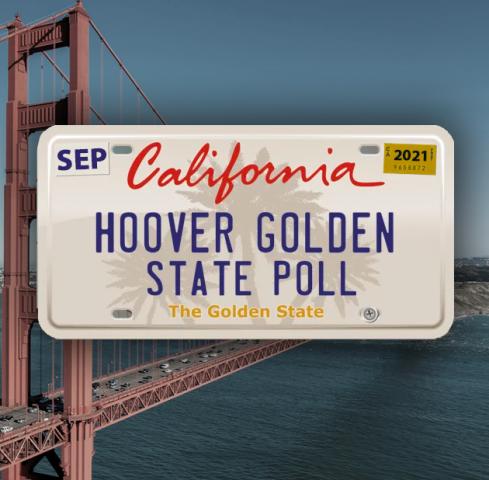 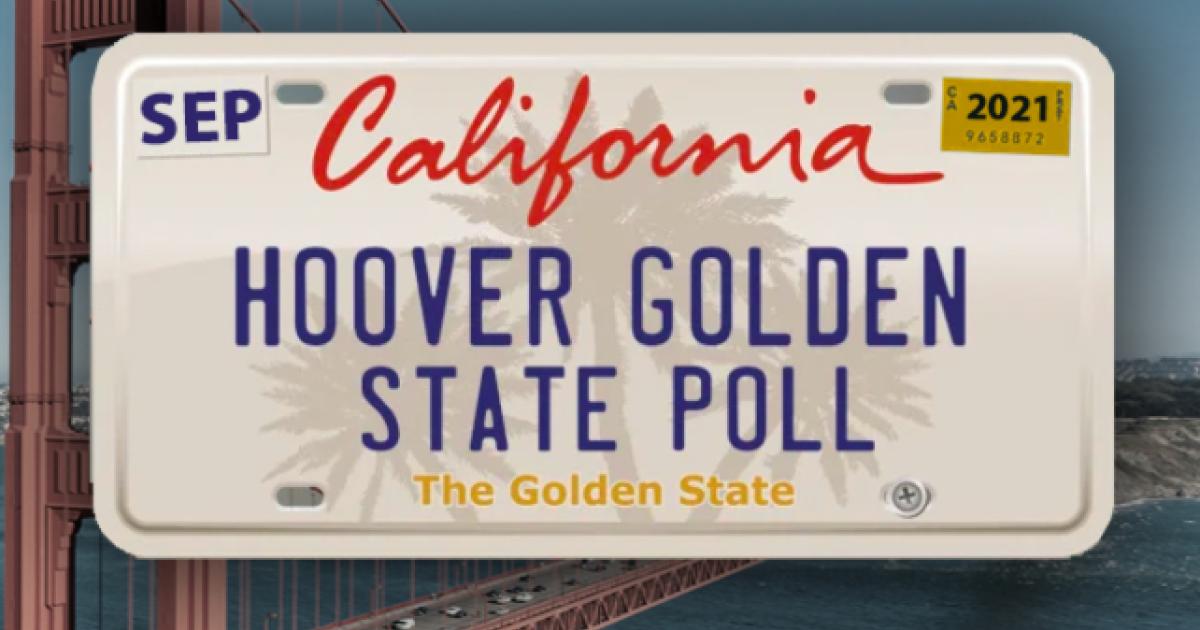 Hoover Institution (Stanford, CA) – The Hoover Institution and Stanford University’s Bill Lane Center for the American West, in partnership with YouGov, have conducted a new Golden State Poll of registered voters in anticipation of the gubernatorial recall election on Tuesday, September 14, 2021. YouGov interviewed 2,043 registered voters between August 27 and September 1, 2021. Results reported below are based on 1,618 likely voters who had received their ballots and said they had already returned their ballots or would definitely do so before election day.

The Recall is Likely to Fail 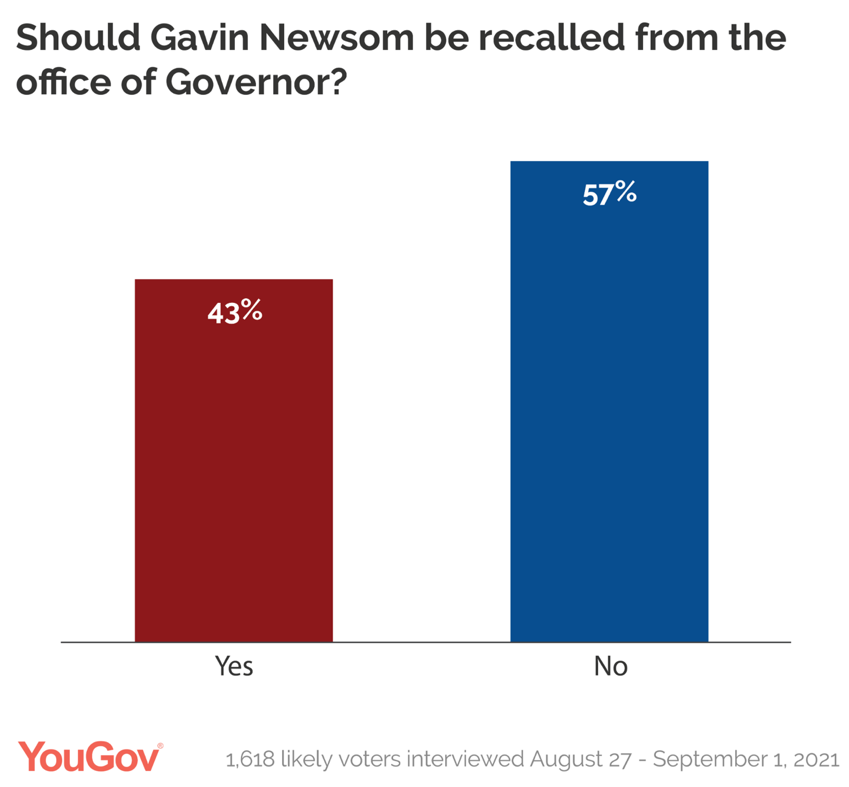 The hopes of recall proponents that apathy might keep Democrats away and allow Newsom to be replaced by a Republican appear unrealistic. In fact, over half of registered Democrats say they have already returned their ballots (compared with 24% of registered Republicans). Even allowing for high rates of late voting by Republicans, Democrats will still have the same 2:1 advantage among voters that they have among registrants. Less than 3% of voters were uncertain about how they would vote.

Nobody is Winning the Replacement Vote

Voters also get to choose a replacement for governor, though this only matters if “yes” gets a majority in the recall vote. In this poll, voters were shown a screen with 46 of the replacement candidates that looked like the actual ballot. In the poll, the leading vote getter was “none” which was selected by 39% of likely voters. On the actual ballot, there isn’t a “none” option, but voters can leave the replacement vote blank. Conservative talk-show host Larry Elder receives the most replacement votes (24% of all likely voters). After Elder, Democratic social influencer Kevin Paffrath gets 7%, Republicans Kevin Faulconer 5% and John Cox 3%. The rest of the votes are scattered among the remaining 42 candidates. Despite her celebrity, Caitlyn Jenner is polling under 1%. 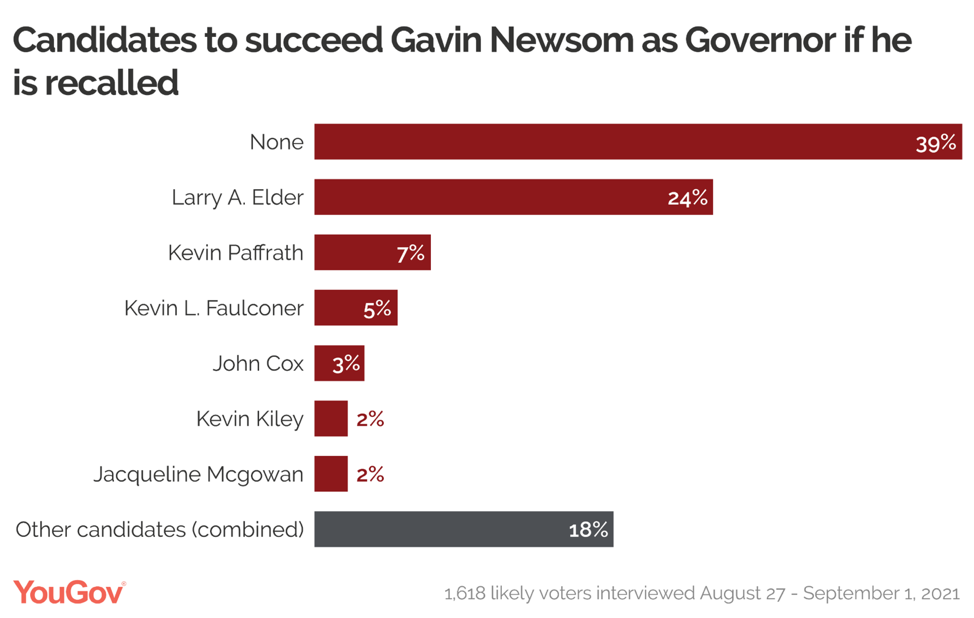 The rules of the recall don’t allow a direct comparison of the governor being recalled with possible replacements, so it’s possible that the result could be a replacement governor who would lose a head-to-head matchup with the incumbent. This would, in fact, be the case if a majority voted to recall Newsom. We asked voters directly whether they would prefer Newsom to Elder and Newsom was chosen by a 61-39 margin among all likely voters and 92-8 among Democratic likely voters. Newsom also defeated all of the other replacement candidates in head-to-head matchups, including the few Democrats on the replacement ballot. 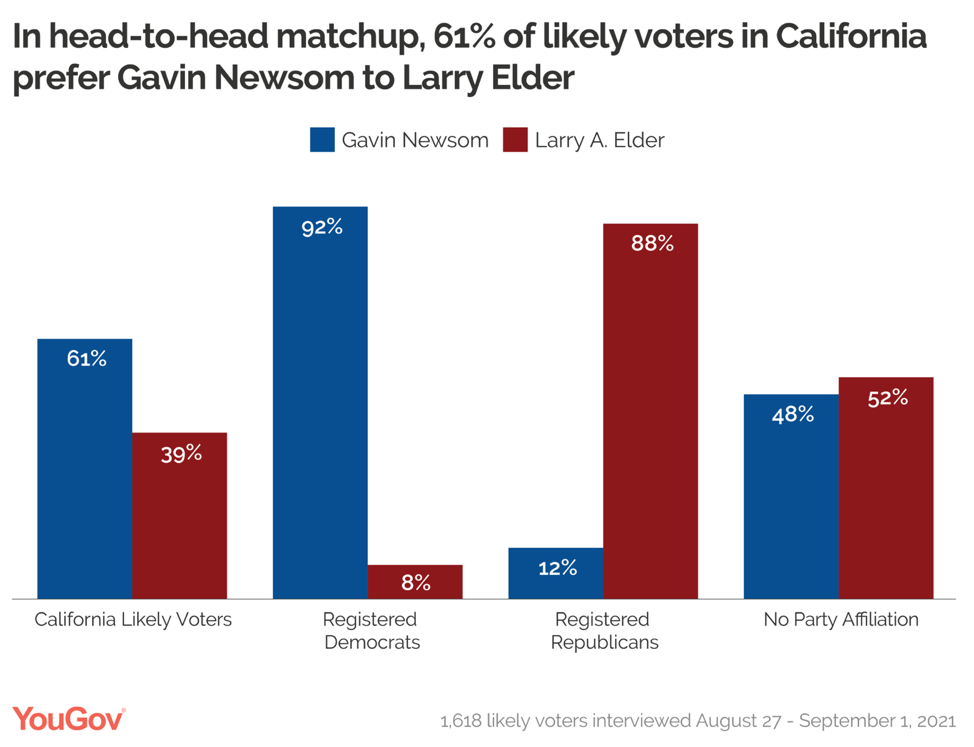 Why Newsom is Winning

Unlike the political environment surrounding the 2003 recall, when the Democratic incumbent, Gray Davis, was deeply unpopular and many Democrats were unhappy about how things were going in the state, Newsom’s Democratic base is neither unhappy nor dispirited. Newsom himself, while not beloved, remains moderately popular. It is Republicans who are discontent and, by themselves, there are too few to carry out a successful recall.

One measure of discontent with the state is people leaving. About 42% of voters said that they were considering moving out of California. This percentage is down a bit from two recent University of California polls, where about half of all respondents said they were considering moving to another state. But, again, propensity to consider leaving California differs by party. Over two-thirds of registered Republicans (68% of likely Republican voters) say they’ve considered moving away versus about a quarter (26%) of registered Democrats.

While Newsom is popular enough to withstand a recall in a deep blue state, the poll did indicate some weaknesses. His overall approval rating stands at a respectable 54% -- almost as high as Joe Biden’s 56% approval rating among the same set of California voters. However, it is clear that Californians have less affection for Newsom than for Biden. Only 36% say they like Newsom “a lot” or “somewhat” as a person, compared to 50% for Biden. Thirty-eight percent say Newsom “says what he believes” compared to 49% who think Biden is sincere in what he says. Newsom is rated as less trustworthy and as caring less about “people like me” than Biden, too. Newsom is perceived to be to the left of Biden. This doesn’t hurt him in liberal California, but only 21% say he’s a “moderate,” which could be a problem in a national campaign. 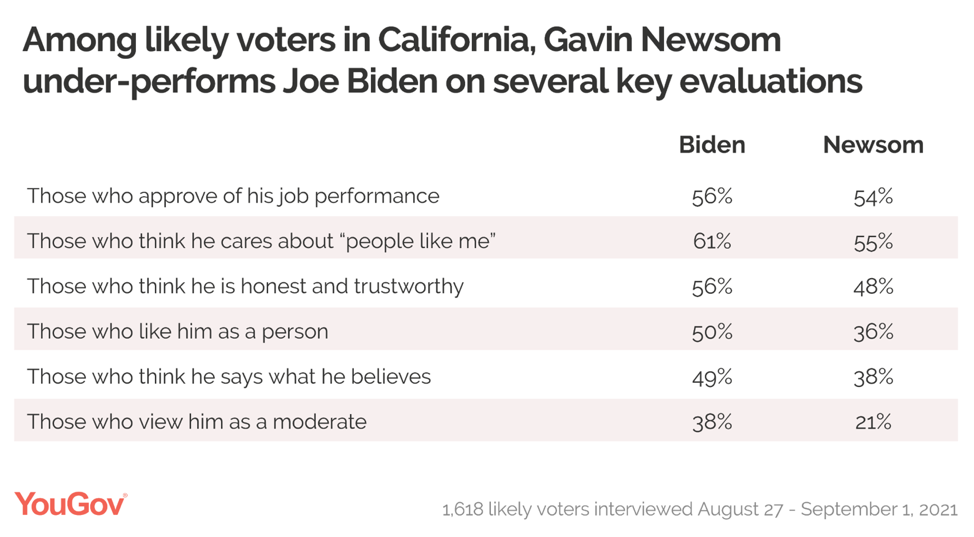 Finally, Newsom gets mixed reviews in his handling of some important policy areas.  COVID-19 is the most important issue for voters in this poll and Newsom receives majority approval (55%) for his handling of the pandemic. Forty-seven percent approve of his reopening the schools and 43% of government spending. But support falls sharply, especially among independents, for his handling of crime (34% approve) and homelessness (only 20% approve).

“While there is a lot of concern about conditions in California to the point that 42 percent of residents surveyed are thinking about leaving the state, it does not translate into support for the Republican replacement candidates. Apathy and confusion at this point are the only hope for the recall supporters,” said Bruce Cain, director of the Bill Lane Center for the American West and professor of political science at Stanford University. “Moreover, it looks as though the public will support efforts to tighten up the rules to prevent the recall option from being overutilized by the minority party.”

This poll was conducted in an internet survey with a sample size of 2,043 registered California voters between August 27 and September 1, 2021. Margin of error ± 2.8 percent.

See below for the entire breakdown of the Golden State Poll data.

With its eminent scholars and world-renowned Library & Archives, the Hoover Institution seeks to improve the human condition by advancing ideas that promote economic opportunity and prosperity, while securing and safeguarding peace for America and all mankind.

The Bill Lane Center for the American West is dedicated to advancing scholarly and public understanding of the past, present, and future of western North America. The Lane Center supports research, teaching, and reporting about western land and life in the United States, Canada, and Mexico.

YouGov is an international research data and analytics group headquartered in London. Its data-led offerings support and improve a wide spectrum of marketing activities of a customer base including media owners, brands, and media agencies. It works with some of the world’s most recognized brands. 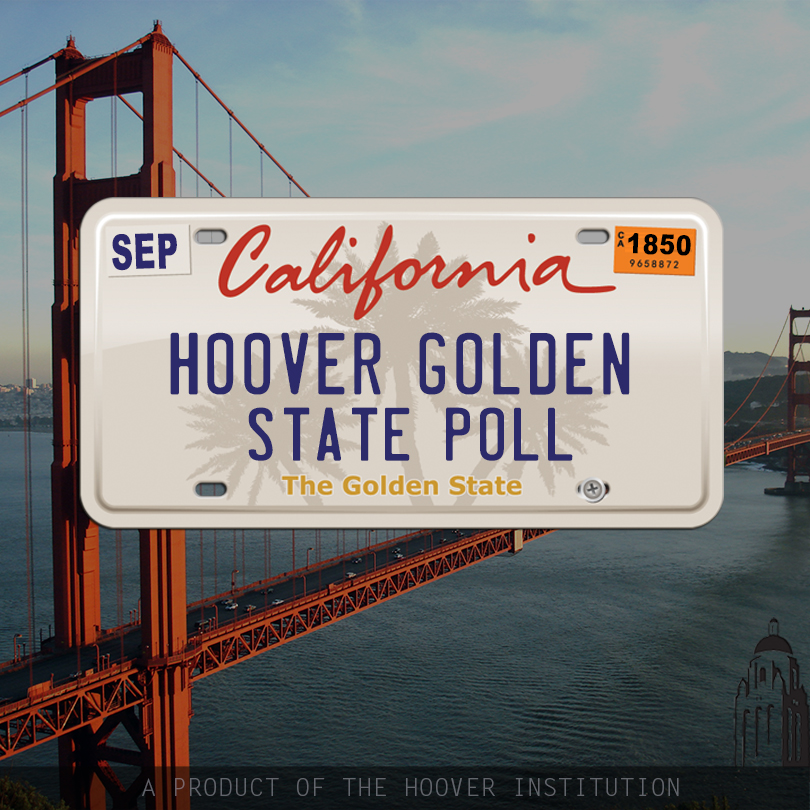