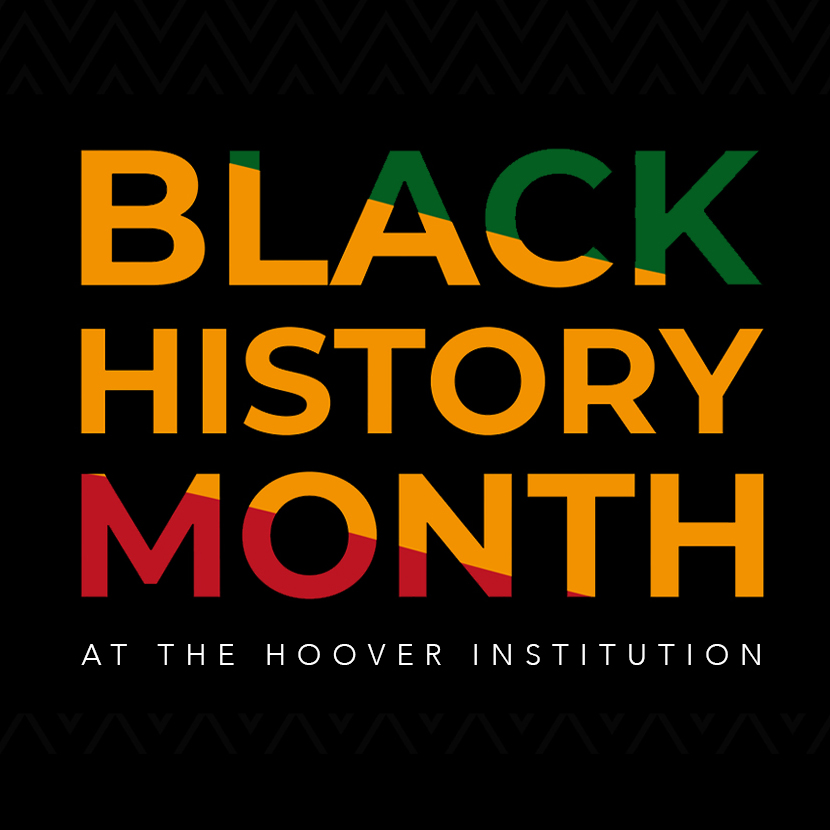 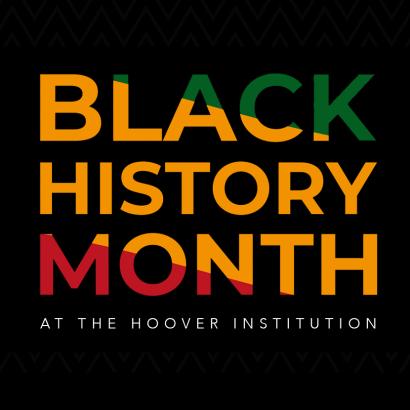 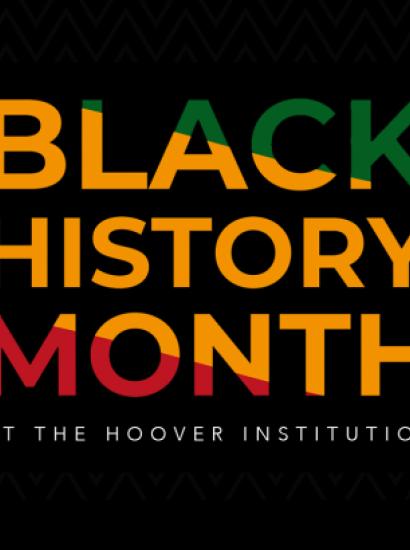 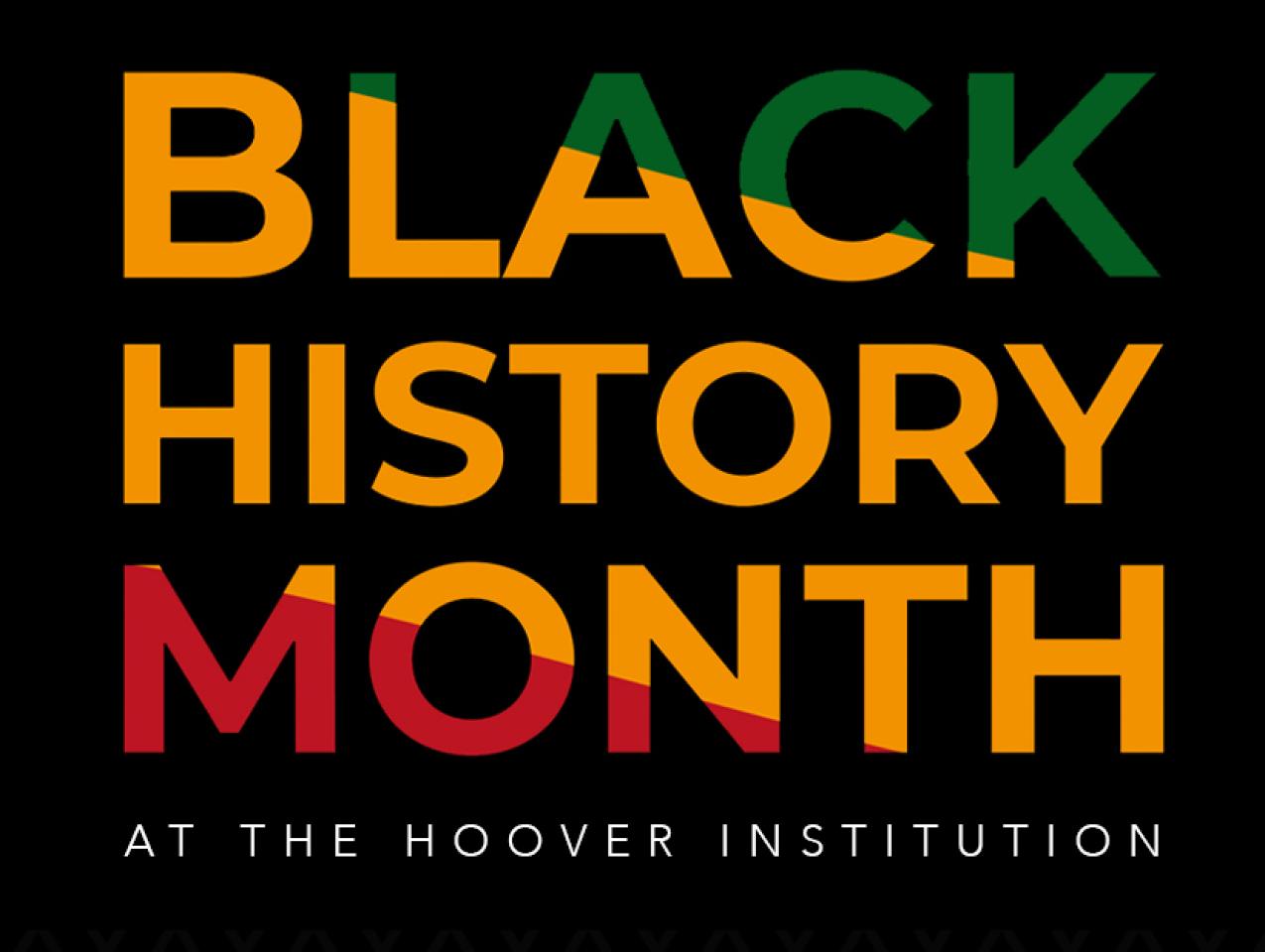 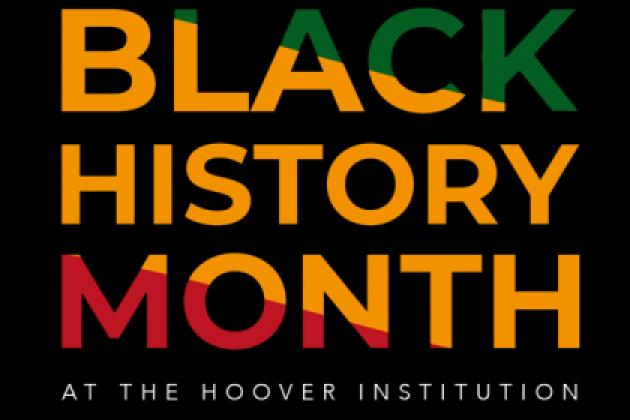 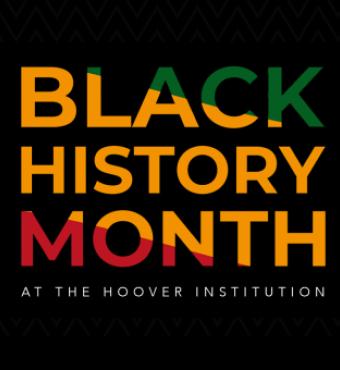 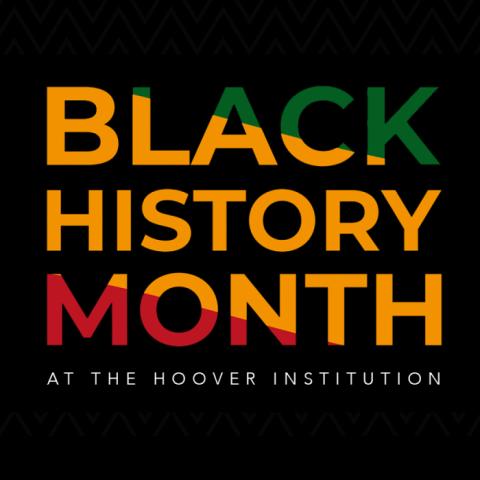 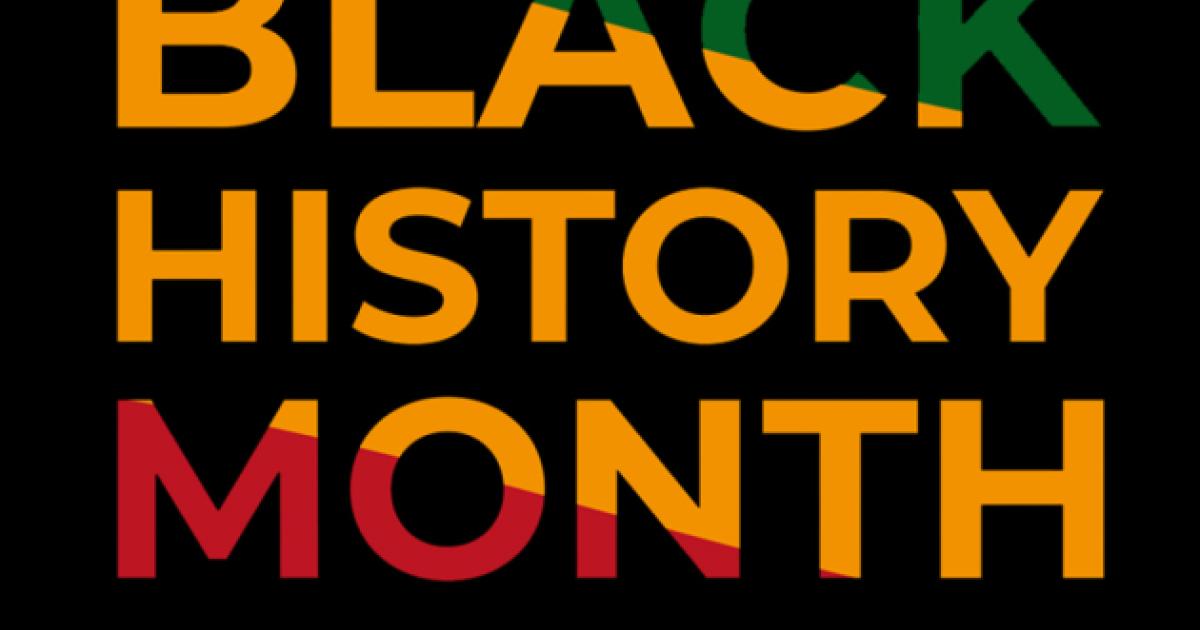 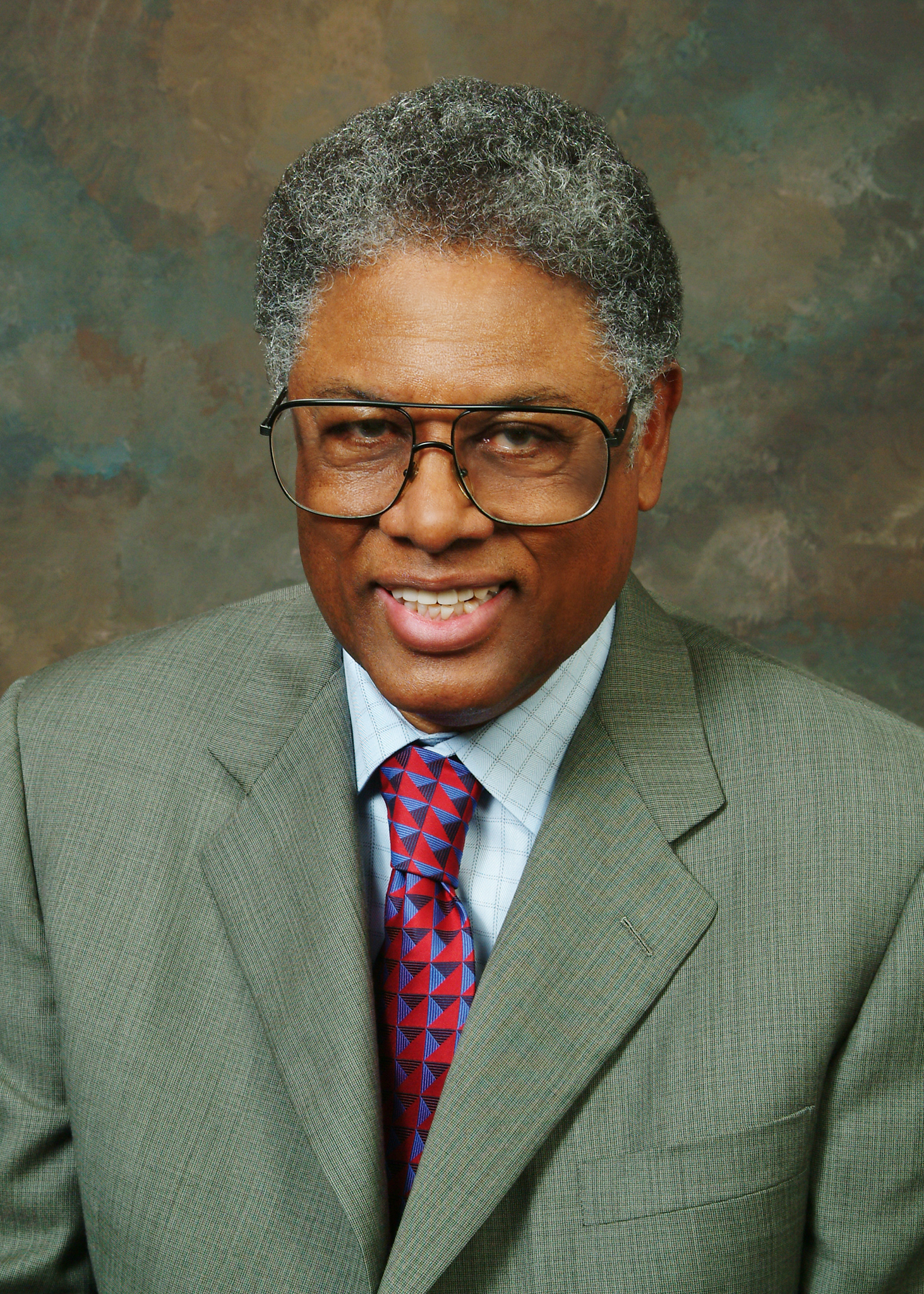 In this profile for Black History Month, the Hoover Institution commemorates the life, scholarship, and incisive commentary on politics, economics, and social issues of Thomas Sowell, Rose and Milton Friedman Senior Fellow.

Thomas Sowell was born into poverty during the beginnings of the Great Depression in Gastonia, North Carolina, on June 30, 1930. His father, Henry, died before he was born, and his mother, Willie, unable to care for young Thomas, gave him up for adoption to his great-aunt Molly. Willie died a few years later during complications while giving birth to another child.

In his memoir, A Personal Odyssey (2000), Sowell recalls that his first memories were living in a wooden house in Charlotte, which he says was typical of most Black neighborhoods. It was located on an unpaved street, and had no electricity or running water.

“It never occurred to me that we were living in poverty,” Sowell writes. “These were some of the best years of my life.”

Sowell moved with his extended family to Harlem in New York City when he was nine years old. At this point, his home life fractured as family quarrels forced him and his aunt to room in other people’s apartments. He made slow progress in his early education. However, he credits a Black grade schoolteacher dedicated to helping her young Black students for pushing him to thrive academically.

“[She] was openly critical of the low standards of the white teachers,” Sowell writes.

Sowell’s improved performance in middle school and his high IQ test scores paved his way for admittance to the prestigious Stuyvesant High School. However, the long-distance commute from Harlem to lower Manhattan and his turbulent home life prevented young Thomas from keeping up with the demands of Stuyvesant’s rigorous curriculum. To the dismay of his family, he dropped out and took various low-paying jobs, including delivering telegrams for Western Union. At sixteen, Sowell left home.

In a 2015 interview for Uncommon Knowledge, Sowell told host Peter Robinson that he became attracted in his twenties to the philosophy of Karl Marx.

He recalled that while working for Western Union he would use the little money he had to splurge on a fare for the Fifth Avenue bus and tour Manhattan’s most affluent areas. He contrasted the life of upper classes with his own paltry living conditions in Harlem’s tenements.

“Marx explained the world around me,” Sowell said.

In 1951, Sowell was drafted into the United States Marine Corps at the height of the war in Korea. Although Sowell opposed the war and experienced racial discrimination, he was able to find fulfillment, because the Marines assigned him to work in photography, his favorite hobby and eventual lifetime passion.

Asked by Robinson why he studied economics, Sowell answered that “it was my best subject and it just made sense to me.”

Sowell went on to receive a master’s degree in economics from Columbia University, studying under future Federal Reserve chairman Arthur Burns. Still holding to the ideals of Marx, he wrote his thesis on the founder of communism’s business cycle theory.

Burns recommended Sowell for a doctoral fellowship at the University of Chicago, where he would study under George Stigler and Milton Friedman, both of whom would later become his colleagues at the Hoover Institution. Sowell’s PhD dissertation was a historical analysis of Say’s law, a classical economics principle holding that supplies of goods and services create their own demands.

Sowell took Friedman’s course on price theory. He writes that the assigned reading of Friedrich von Hayek’s essay “The Use of Knowledge in Society” left an indelible impression of how fragmented knowledge scattered among vast numbers of people shaped the way decisions were made in a free-market system. The essay became the influence of Sowell’s 1980 book, Knowledge and Decisions.

Despite Sowell’s tutelage by renowned classical economists of the Chicago school, Sowell remained an adherent to Marxism. This changed in the summer of 1960 while he was working as an intern at the US Department of Labor. Sowell’s assignment was to examine the sugar industry in Puerto Rico, which was impacted by the US government’s minimum-wage laws.

The sugar industry was experiencing increasing rates of unemployment, leading unions and experts within the Labor Department to conclude that hurricanes were causing declining output. Sowell wanted to dig deeper into the data and suggested that the cause of unemployment might have been a mandated minimum wage.

“I came into the office one day, and I announced to the whole group: ‘What we need are statistics on the amount of sugarcane standing in the fields before the hurricane came through,’” Sowell recalled. “I am waiting for the congratulations and I could see looks of shock in the room: ‘This idiot has stumbled on something that could ruin us all.’ I was concerned whether this law was beneficial or not beneficial to low-income people. They were concerned because this law was providing one-third of the income of the US Department of Labor.”

Sowell writes that this event began to erode his faith in government programs and caused him to rethink the role of government in general.

Except for brief periods of holding economic-related positions at the US Department of Labor, the American Telephone & Telegraph Company, and the Urban Institute, Sowell spent his entire career teaching economics at major academic institutions including Cornell University, Brandeis University, Amherst College, and UCLA.

Since 1980, Sowell has held the position of senior fellow at the Hoover Institution, where his career as an author, columnist, and public intellectual took off and reached its zenith.

The book he published that year, Knowledge and Decisions, won the Law and Economics Centre Prize. The book details the gap between knowledge and decision making, especially among individuals and government agencies. Sowell maintains that while individuals and governments make rational choices consistent with their respective interests, when the government does so, it often limits the freedom of its citizens. Sowell concludes that “freedom is the right of ordinary people to find elbow room for themselves and a refuge from the rampaging presumptions of their betters.”

These “betters” are the subject of what has been considered Sowell’s seminal work, The Vision of the Anointed: Self-Congratulation as a Basis for Public Policy (1996) in which he argues that members of society’s liberal elite class don’t actually argue and advance their ideas; rather they evade, obfuscate, and appeal to their own authority. Sowell writes that these elites frequently frame issues and events as crises—which only they can solve, regardless of the costs they might impose on society. Instead, he advocates for a more cautious and practical approach to public policy based on what he called a “tragic” or “constrained” vision, which is that humans face limited choices and the costs of their decisions are consequential.

In The Quest for Cosmic Justice  (2002), Sowell argues that America’s liberal elites do not just try to establish equality under the law, they seek to abolish inequalities that are innately constituted in nature. Consequently, Sowell maintains, the elites have accrued significant power for themselves through insulated bureaucracies and the court system. He holds that the application of their costly ideas will cause immeasurable damage to the rule of law and society at large.

In a more recent book Discrimination and Disparities (2018), Sowell takes on what he calls the “invincible fallacy,” that outcomes for individuals in a society would be the same if not for negative factors such as discrimination and genetic defects. He argues that empirical data prove that there are many different reasons for disparities of success and  “to single out one reason a priori is just madness.”

True to his intellectual discipline and his commitment to broad education, Sowell has written five editions of his textbook, Basic Economics, which was intended to be a clear and concise citizen’s guide to “the dismal science.”

“Through its various editions, the fundamental idea of Basic Economics remains the same,” Sowell writes. “Learning economics should be as uncomplicated as it is informative.”

Other major works by Sowell include A Conflict of Visions: Ideological Origins of Political Struggles (1987), Economic Facts and Fallacies (2008), Intellectuals and Society (2009), Intellectuals and Race (2013), and Wealth, Poverty, and Politics (2015).

After producing several thousand essays for his weekly Creator’s Syndicate column, Sowell put down his pen to focus on his passion for photography.

“Even the best things come to an end,” Sowell wrote in his final piece, entitled “Farewell,” in December 2016. “Age 86 is well past the usual retirement age, so the question is not why I am quitting, but why I kept at it so long.”

In 2020, Sowell returned from retirement to write a new best seller, Charter Schools and Their Enemies, which argues that educational achievements made by Black and other minority students undermine educational dogmas about cultural bias in testing and negative outcomes based on those students’ socioeconomic status.

He also explains how traditional public schools, backed by powerful teachers’ unions and their enabler politicians, behave as monopolies in the domain of education and have skewed the learning gap between White and minority students. Furthermore, Sowell maintains, these special interests, in order to maintain their monopoly, have worked to curtail the growth of charter schools despite the evidence that such schools have improved the educational and economic potential of Blacks and other minorities.

“Understanding why and how educational success had been such unwelcome news to so many people and institutions is the purpose of this book,” Sowell writes. “With growing political threats to charter schools across the country, the stakes could not be higher for poor and minority youngsters, for whom a good education is their biggest opportunity in life.”