The prime minister of Estonia, Andrus Ansip, was a featured speaker at the Hoover Institution retreat November 29 and 30. In his talk, “How a Former Soviet Satellite Became One of the World’s Most Free Economies,” Ansip said that “freedom means something very special to Estonians. Freedom for us means the right to decide our own future; the right to run our own affairs, in both the political and economic sense; we know what it’s like to live without freedom; and we know that freedom is not free.” Wednesday, December 12, 2007 4 min read 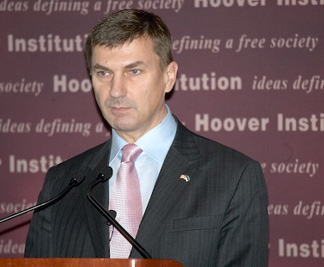 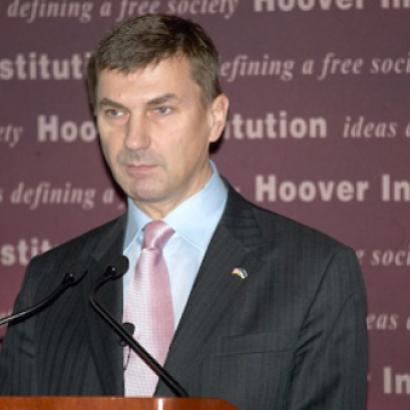 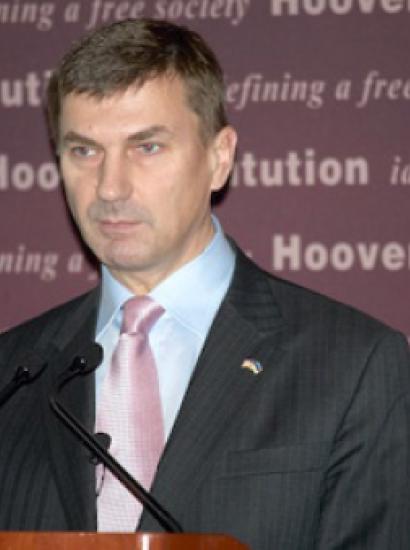 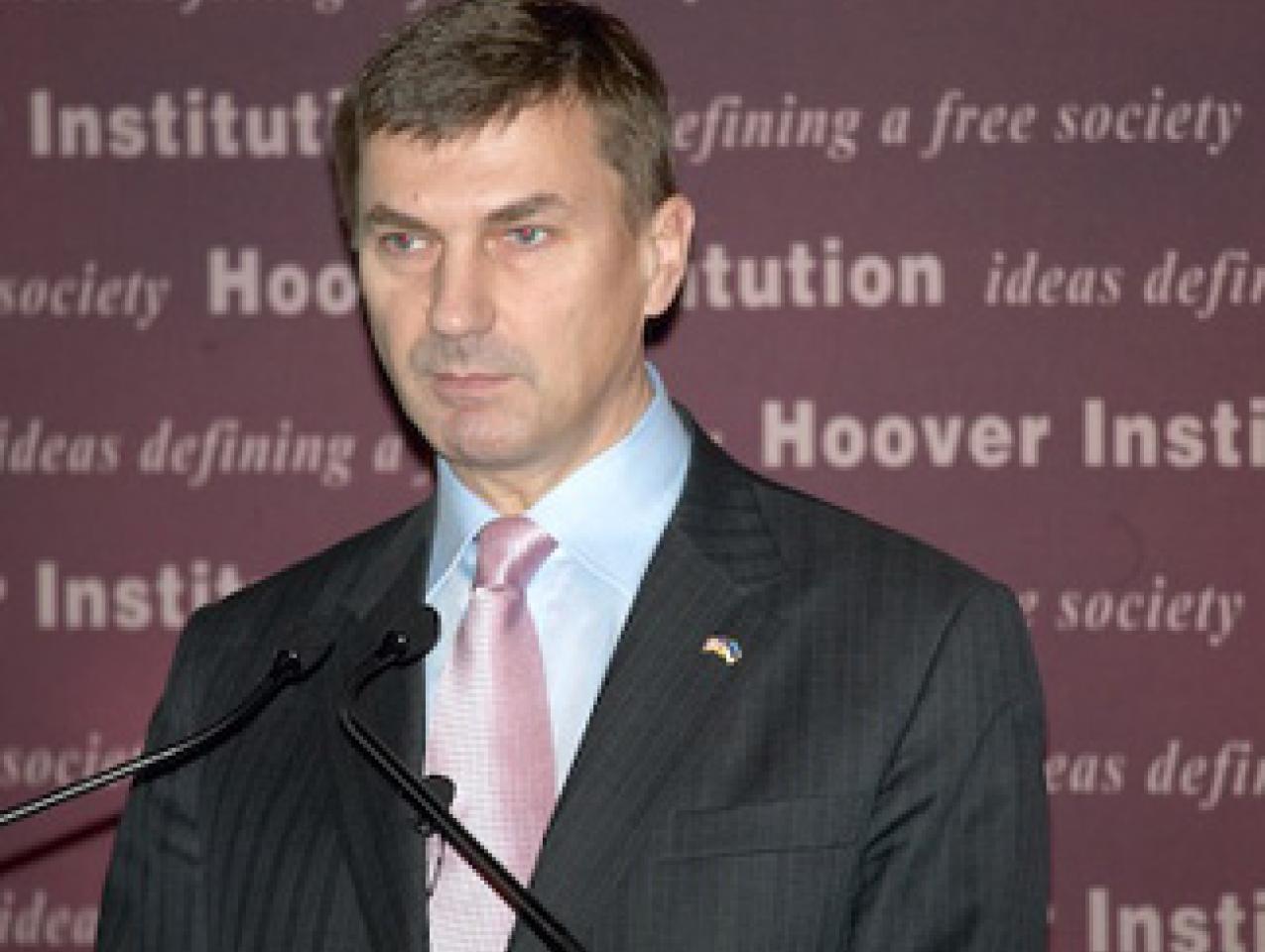 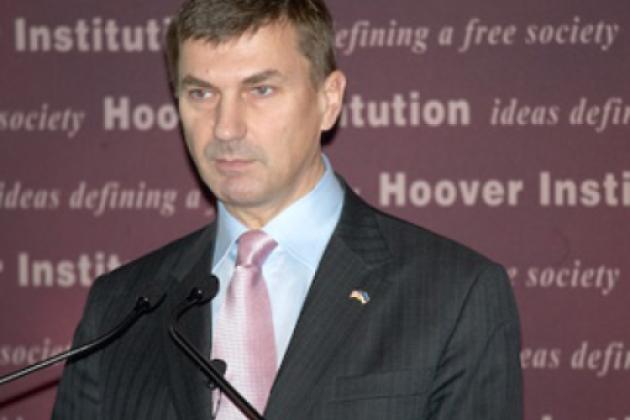 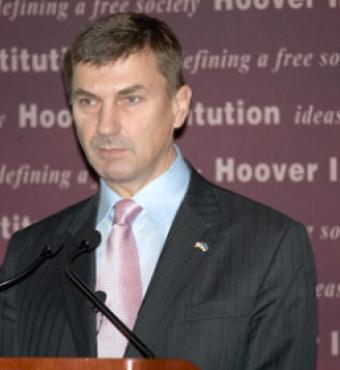 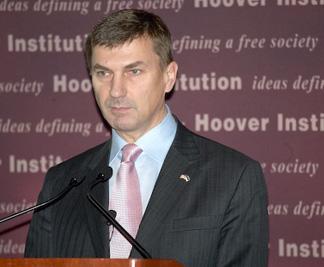 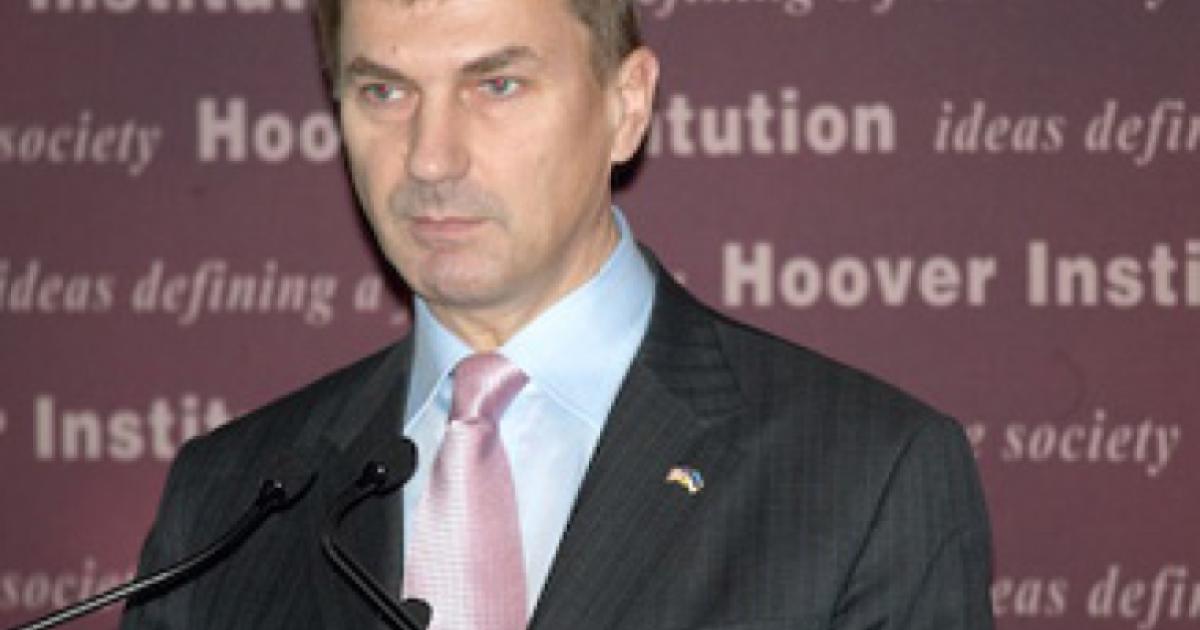 The prime minister of Estonia, Andrus Ansip, was a featured speaker at the Hoover Institution retreat November 29 and 30. In his talk, “How a Former Soviet Satellite Became One of the World’s Most Free Economies,” Ansip said that “freedom means something very special to Estonians. Freedom for us means the right to decide our own future; the right to run our own affairs, in both the political and economic sense; we know what it’s like to live without freedom; and we know that freedom is not free.”

A former Soviet-bloc nation; today, Estonia’s economy is ranked by experts as one of the most free in the world, no small feat for a former communist country, Ansip noted. He said Estonians turned their economy around by opening up their markets to the outside world, allowing companies in to compete.  Instead of protecting their national industries with artificial barriers, they welcomed outside trade and competition. Estonians chose to transform their economic system from one that was highly controlled to one that relied on the, realizing that it was important to reintegrate with the West, Ansip said. Ansip cited the establishment of a flat tax system, the creation of property rights, and the use of technology as among the reasons for Estonia’s economic success.

Those rapid reforms have had a significant impact on Estonian society, Ansip said. Before World War II Estonia was on par with neighboring Finland. Today, after 16 years of hard work, Ansip said, Estonia is closing the gap that emerged between the two countries when Estonia was under communist rule.

In addition, a variety of other topics were discussed at the retreat, including the U.S. economy, the potential of charter schools, Islamofascism and the Bush doctrine, and Iraq.

The U.S. economy was the subject of a separate presentation by Russell Roberts, Hoover research fellow. “We live in the most successful economy in human history,” said Roberts. In his presentation “The Secret of Our Success: A Closer Look at Creative Destruction,” Roberts offered an optimistic view on why the U.S. economy is doing so well and why it will continue to do so in the long run.

Today, Roberts said, people live much better than they did at the turn of the twentieth century as a result of economic growth, which, he said, did not exist for most of history. The economy grows for two reasons: trade and the combined forces of innovation, technology, and knowledge, which combine to enable manufacturers to find ways to get more out of less, Roberts said. Although many people are concerned about job loss, Roberts pointed out that every three months there are 7 to 9 million jobs lost and another 7 to 9 million jobs created. “Enough jobs are being created to outweigh the jobs that are lost,” said Roberts.

In discussing the dynamism of the U.S. economy Roberts added that cultural aspects of the United States, such as the tolerance for economic change, for the accumulation of wealth, and for failure, coupled with the advent of venture capitalism, have supported the growth of the U.S. economy.

Hoxby said charter schools, which are tax-funded public schools, differ in some significant ways from regular public schools in that they are fee-based, compete for students, have autonomous management, governance structures similar to other nonprofit organizations, and can be part of a “chain” (like that of a business). The experience for students at charter schools also differs from regular public schools, including a longer school year, a longer school day, Saturday classes, faculty advisers, regular diagnostic assessments of learning, and school uniforms (not required in all schools). For the teachers, differences include performance-based pay and no unions.

Hoxby’s research shows that students of the same socioeconomic and educational backgrounds enrolled in charter schools perform better than those same students in regular public schools. At this time, it isn’t clear what the causes may be, Hoxby said.

Islamofascism and the Bush doctrine
Are we in another world war? Norman Podhoretz, editor at large of Commentary magazine, discussed his book World War IV: The Long Struggle against Islamofascism in a presentation by the same name. “The war into which we [United States] were plunged six years ago cannot be understood, let alone won, unless we face up to the hard truth that it is a direct successor to the two world wars that immediately preceded it. That Afghanistan and Iraq are not wars in their own rights, but fronts or theaters in the larger struggle. And that like the cold war, which in retrospect, can be seen more clearly as World War III this new war, World War IV, will in all probability go on for some three or four decades,” Podhoretz said.

Podhoretz discussed the threat from what he terms Islamofascists that those in the West must confront. Although some do not believe they are as dangerous as Nazis or Communists, Podhoretz believes they are more dangerous and more difficult to defeat. “The objective of the Islamofascists is dedicated to the destruction of freedoms Americans hold dear,” Podhoretz said. Their success or failure, Podhoretz said, depends on the U.S. response.

Podhoretz also defended President George W. Bush’s foreign policy, which he compared to that of President Harry S. Truman. Truman, he said, recognized the Soviet threat before others did and, in response, developed the Truman doctrine, which became known as containment. President Bush, Podhoretz said, has taken the same approach to the threat of Islamofascism: “This is why I believe that he, too, will some day be recognized as a great president.” Podhoretz summarized the Bush doctrine as a “long- range strategy designed to make the Middle East safe for America by making it safe for democracy; preemption as its main military instrument, and democratization as its main long-range political instrument.”

Iraq
Victor Davis Hanson, the Martin and Illie Anderson Senior Fellow, who was recently in Iraq, had high praise for the U.S. military on duty there, particularly those leading the command, including colonels and lieutenant colonels.

“These are the people who know that area and the war like no other,” said Hanson, in his presentation titled “What Has Changed in Iraq?” at the dinner Thursday, November 29. “They are using an ad hoc approach, not a top-down approach; they are in the field, and they are the group we want to retain for leadership in the future.”

Hanson told the group that stability is coming gradually to the region through increased trade and the ripple effect of higher oil prices. “Money made from the oil boom in the region is leading to plenty of consumer goods making their way into Iraq via convoys of trucks. This is the way that reconstruction is coming about,” he said.

Breakout Sessions
In addition to the plenary speakers mentioned above, Hoover fellows and guest speakers presented conversations on a variety of topics. The conversations included