A selection of highlights from Hoover's most popular podcast series including discussions ranging from the ongoing war in Ukraine, inflation, cryptocurrencies, education, Supreme Court decisions, COVID-19 pandemic, the Biden administration’s policies and more. 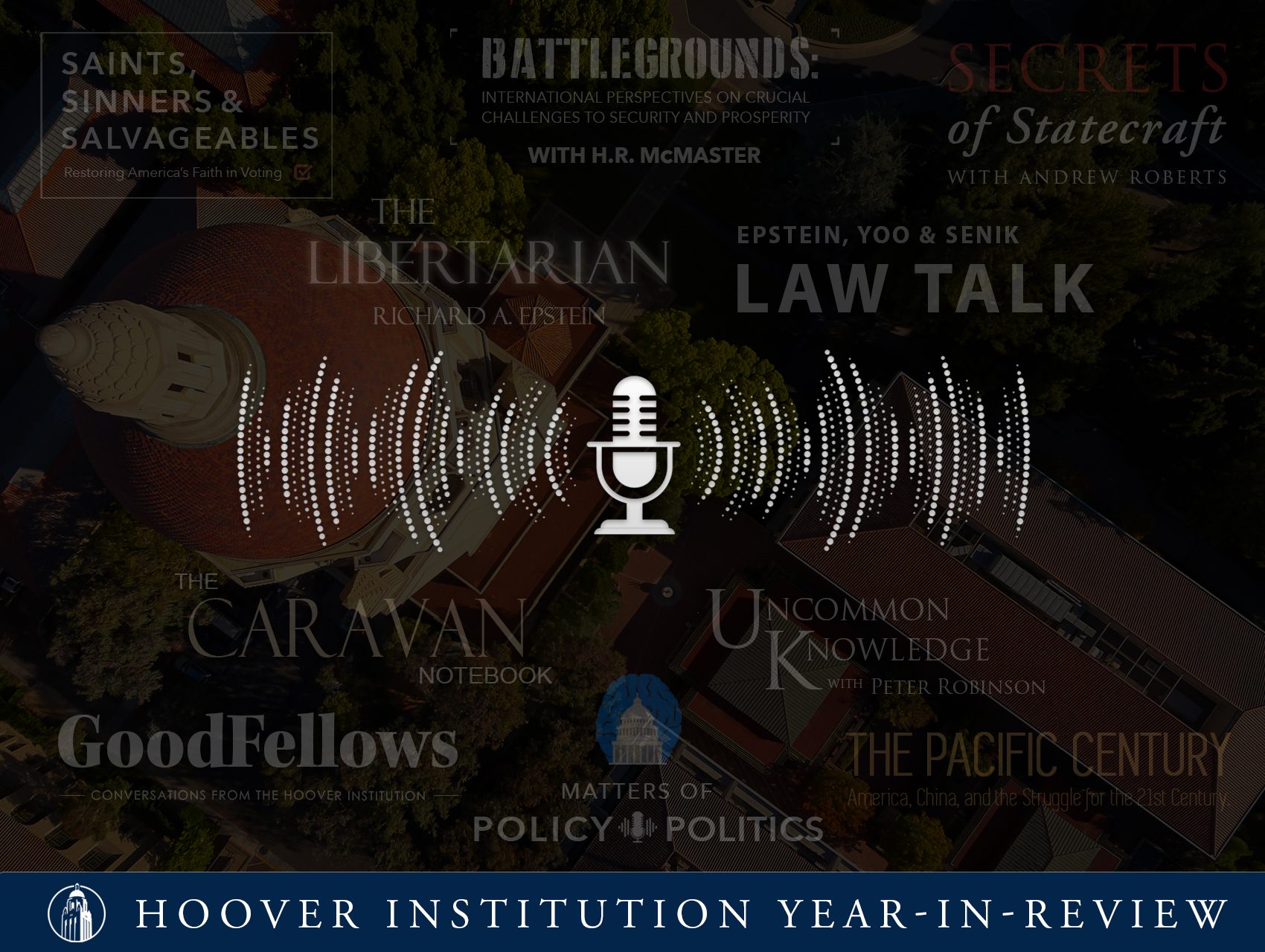 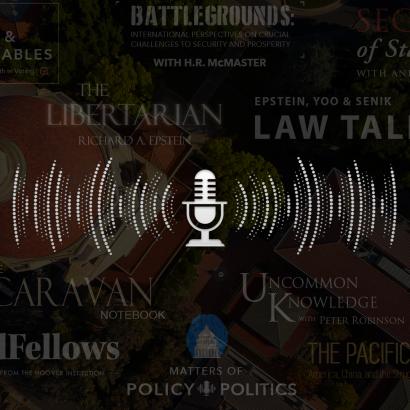 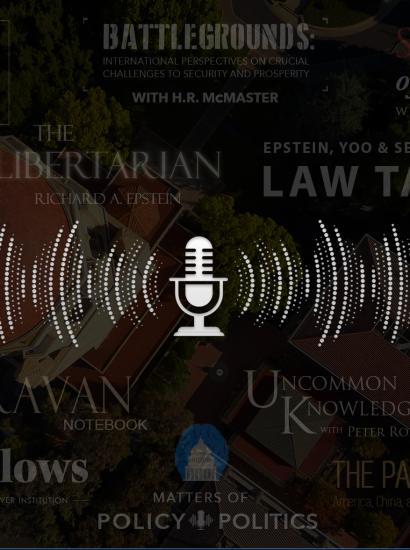 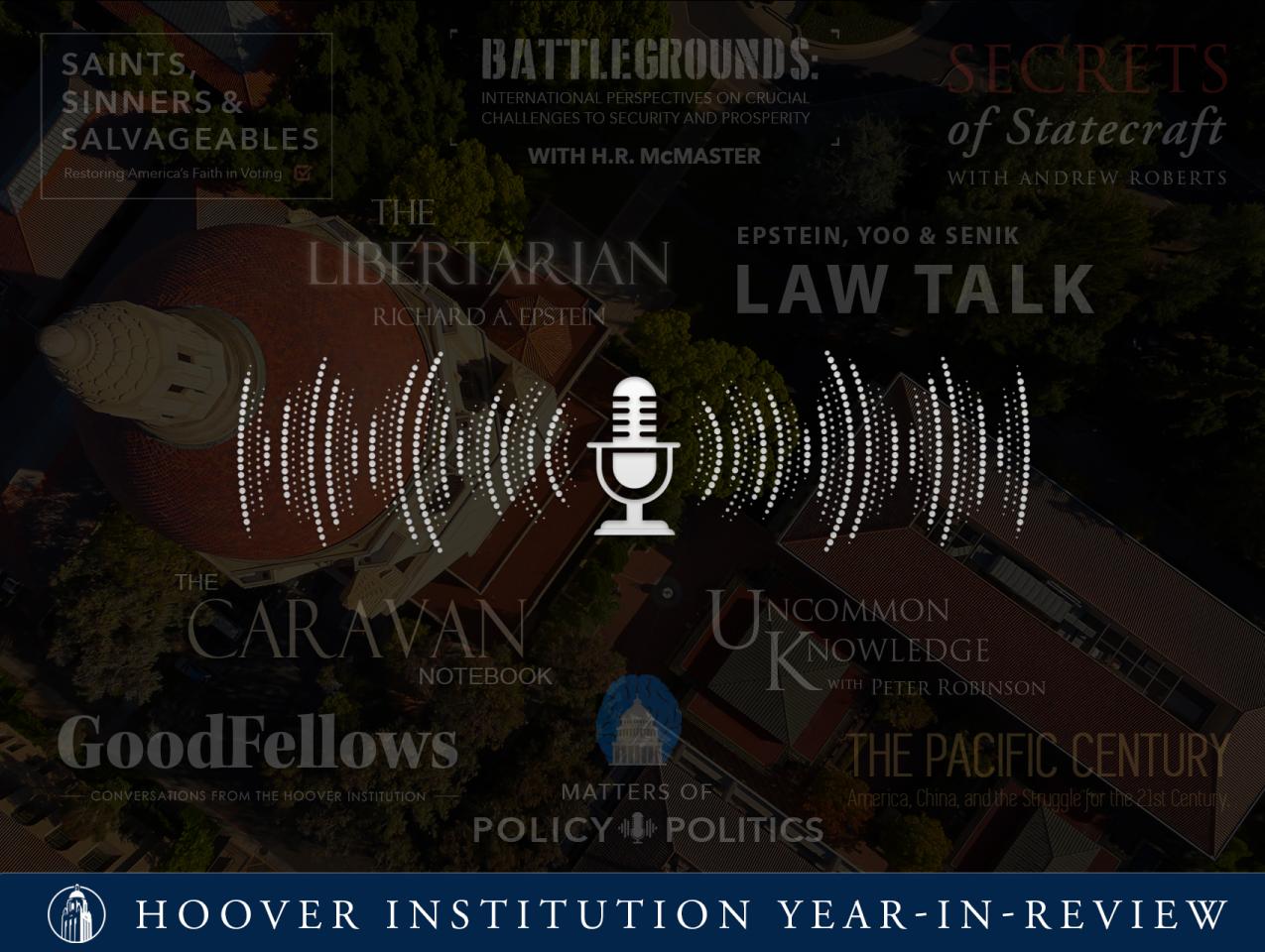 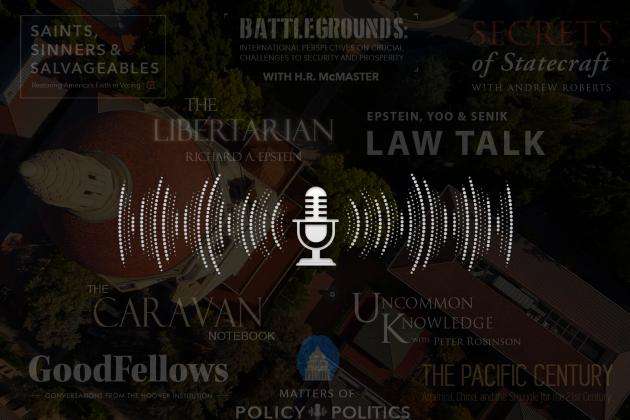 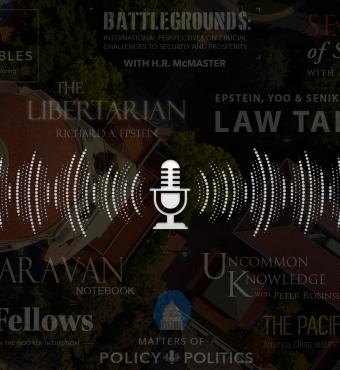 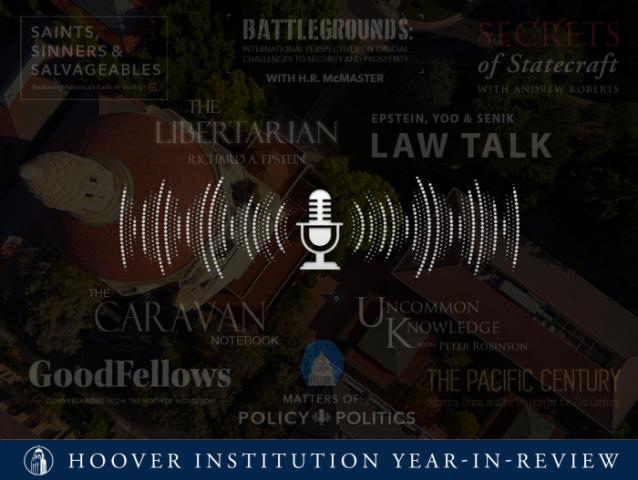 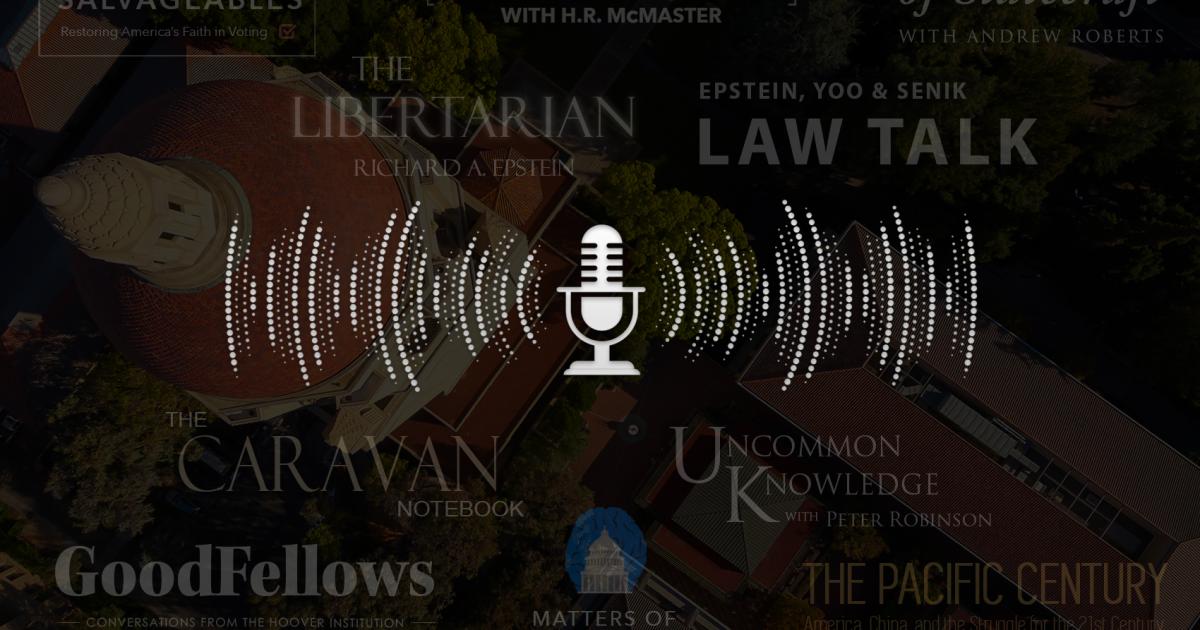 In 2022, the Hoover Institution interviewed Hoover fellows and guests about today’s most important topics in public policy, law, economics, foreign policy, culture, and beyond. As 2022 draws to a close, we highlight some of the year’s most popular episodes, from our new and existing podcast series. Highlights include discussions ranging from the ongoing war in Ukraine, inflation, cryptocurrencies, education, Supreme Court decisions, the COVID-19 pandemic, and the Biden administration’s policies.

Hosted by Hoover fellow Bill Whalen, this podcast is devoted to matters of governance and balance of power at home and abroad.

The Supreme Court Weighs In On Vaccine Mandates

An unusually long Supreme Court hearing (three hours in all) regarding two Biden Administration vaccine mandates raises thorny questions regarding federalism, states’ rights, and balance of power between the three branches of the federal government. John Yoo, a Hoover Institution fellow and UC-Berkeley School of Law professor, explains why conservative justices may strike down at least one mandate and the he previews two upcoming landmark cases involving Harvard’s admission practices and New York’s gun restrictions.

The Battlegrounds interview series provides a needed forum with leaders from key countries to share their assessment of problem sets and opportunities that have implications for U.S. foreign policy and national security strategy.

Hoover fellow and host Benjamin Ginsberg will interview those directly involved in elections and the study of elections to explain how votes are cast, counted, and certified; how partisans across the political spectrum use this process for their own advantage; and improvements that need to be made to keep our democracy functioning.

In battleground states across the nation, disinformation and partisan accusations have fed a growing lack of public confidence in America’s democratic process. Hoover Institution visiting fellow Ben Ginsberg, a preeminent authority on election law, interviews NYU Law professor Bob Bauer and Maricopa County supervisor Bill Gates on the root causes for the electorate’s trust going off the rails and suggested reforms to reassure those doubters that future elections are conducted honestly, with their votes counted accurately.

For more podcasts by Saints, Sinners, and Salvageables, click here.

The 21st century may be the Pacific Century, and China appears poised to become America’s greatest rival for global power and influence. Host Michael Auslin broadly addresses developments in China and Asia. Auslin and his guests discuss the latest politics, economics, law, and cultural news, with a focus on US policy in the region.

Misha is joined by his Hoover colleague, historian Frank Dikotter, to talk about Frank's new book, China After Mao, how the West misunderstands the Party's nature, and why the idea of a liberalizing China has always been a chimera.

The Secrets Of Statecraft with Andrew Roberts

Secrets of Statecraft is a bi-monthly podcast hosted by Andrew Roberts which explores the effect that the study of history has had on the careers and decision-making of public figures, and which will also ask leading historians about the influence that the study of History had on their biographical subjects.

Understanding the psyche of Russia and the Russians has bewildered Westerners for generations; foremost expert Stephen Kotkin gives some penetrating insights into how to do it.

For more by the Secrets of Statecraft with Andrew Roberts, click here.

Goodfellows: Conversations From The Hoover Institution

In uncertain times what’s needed is not just clarity about today’s pandemic, but insight into the challenges that lie ahead as America recovers and returns to normal. GoodFellows, a weekly Hoover Institution broadcast, features senior fellows John Cochrane, Niall Ferguson, and H.R. McMaster discussing the social, economic, and geostrategic ramifications of this changed world.

As the Russia–Ukraine conflict approaches the 100-day mark, is any kind of resolution in sight? Condoleezza Rice, former US secretary of state and the Hoover Institution’s Tad and Dianne Taube Director, joins Hoover senior fellows Niall Ferguson, H. R. McMaster, and John Cochrane for a conversation encompassing the war in Eastern Europe, its impact on US-Sino policy, plus what the scourge of gun violence says about America’s social and cultural divides.

As the fighting in Ukraine continues, what’s the wisest strategy for the United States—keep sending weapons, help the Ukrainians broaden their operations, or advocate for a peaceful settlement? Victor Davis Hanson, the Hoover Institution’s Martin and Illie Anderson Senior Fellow, joins senior fellows John Cochrane, Niall Ferguson, and H. R. McMaster for a spirited debate regarding the breadth of American involvement overseas, Donald Trump’s sway over election outcomes, plus California’s drought and its impact on Victor’s farm in the San Joaquin Valley.

A lively (and often funny) look at legislation and constitutional jurisprudence by preeminent law professors Richard Epstein and John Yoo. The show is hosted by Troy Senik.

On this installment: Did the Supreme Court’s parsing of the vaccine mandate pass muster? Have we figured out Justices Gorsuch, Kavanaugh, and Barrett yet? Can Donald Trump be held civilly liable for the January 6 riots? Did the Supreme Court sell the former president’s claims of executive privilege short?

For more than two decades the Hoover Institution has been producing Uncommon Knowledge with Peter Robinson, a series hosted by Hoover fellow Peter Robinson as an outlet for political leaders, scholars, journalists, and today’s big thinkers to share their views with the world.

Last month, Uncommon Knowledge with Peter Robinson asked Princeton Professor and Hoover Institution Senior Fellow Stephen Kotkin 5 questions, all in the foreign policy and history realm. Since then, the world has changed in ways that were unimaginable just 3 weeks ago. So we asked Professor Kotkin to come back for a second round of questions, this time all dedicated to one topic: the Russian invasion of Ukraine. And as usual, his answers are concise, incisive, and analytic. If you want to understand this crisis and some possible outcomes, don’t miss this conversation.

In 1970, Stanford professor Paul Ehrlich published a famous book, The Population Bomb, in which he described a disastrous future for humanity: “The battle to feed all of humanity is over.

Commentary on a variety of subjects, ranging from current events to cultural trends, and including topics that are too local or too specific from the larger questions addressed quarterly in The Caravan.

Degrading and Destroying the Islamic State

After the Islamic State seized large swathes of Syria and Iraq in 2013-14, the United States led a yearslong effort to roll back the group’s gains.