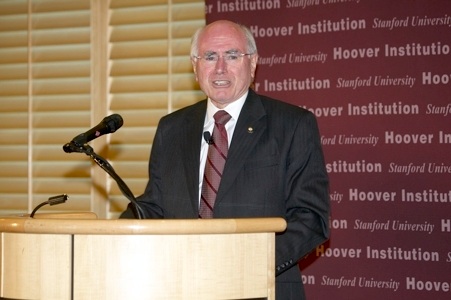 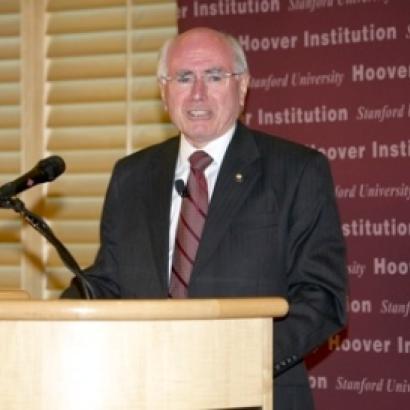 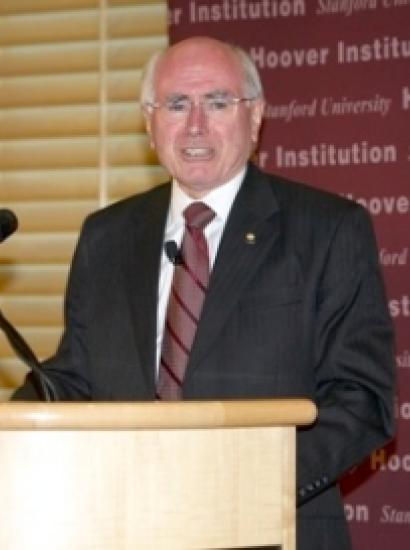 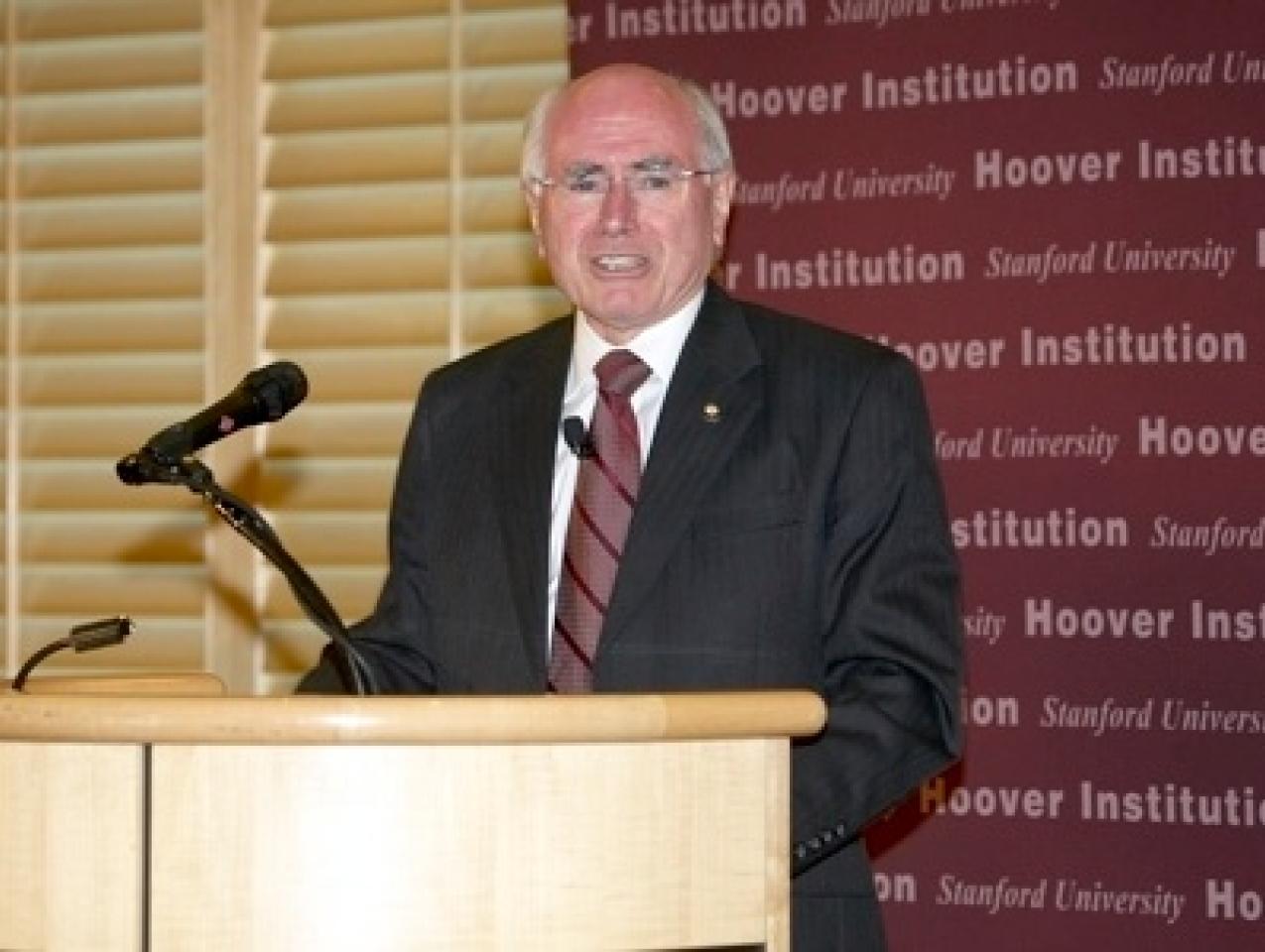 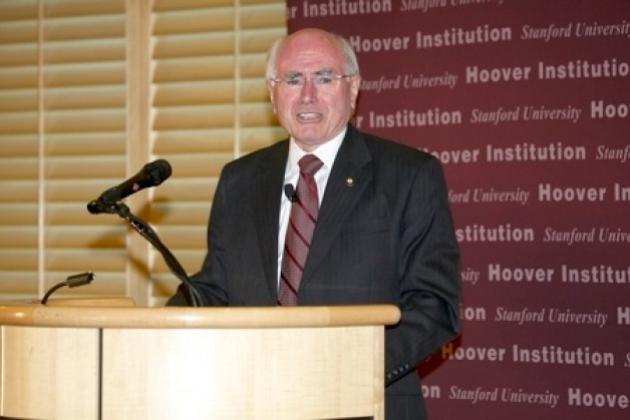 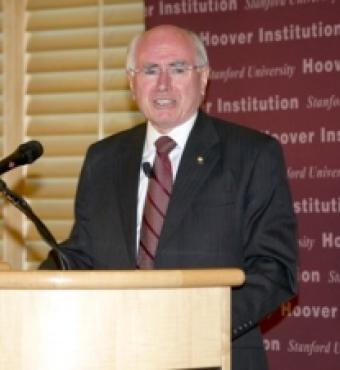 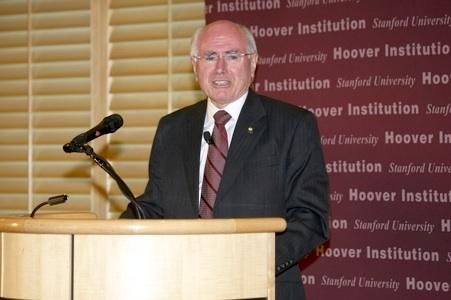 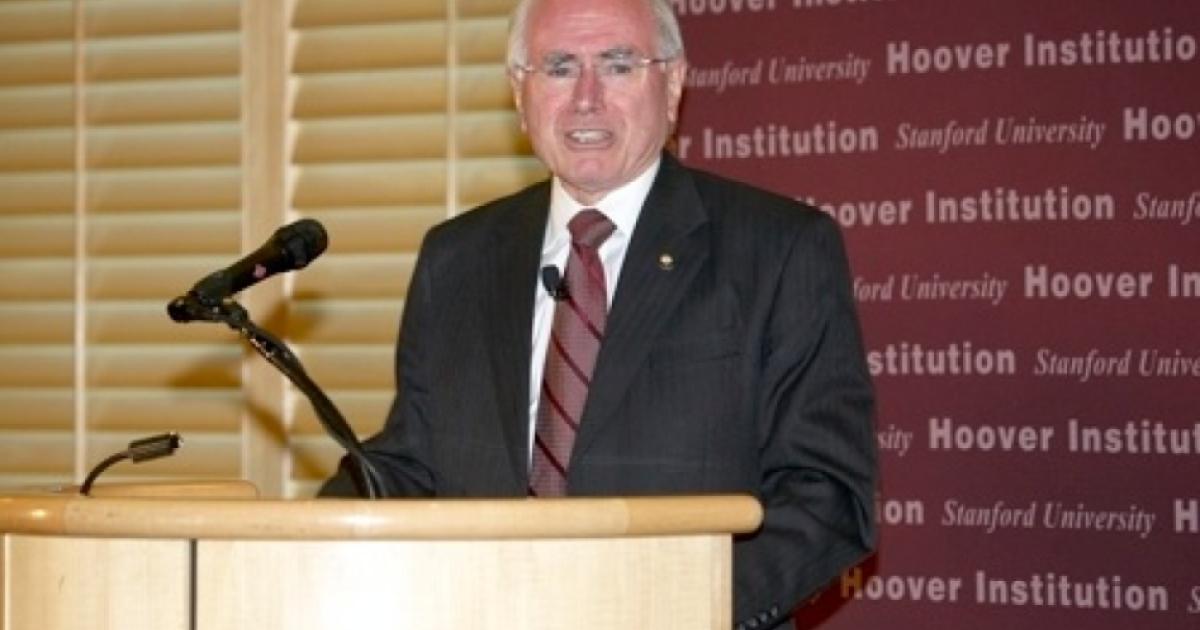 The Honorable John Howard, former Australian prime minister, offered before–dinner remarks at the Hoover Institution’s April 2009 Spring Retreat on Sunday, April 26. Howard cautioned against accepting the view that all that has happened is the result of excesses of the free market and overzealous and rigorous application of liberal economic principles.

Howard led the center/right Liberal Party of Australia for16 years during his more than 30 years in the Australian House of Representatives. A conservative on social policy, Howard pursued broadly promarket economic policies during his time as prime minister. In his remarks, titled “Broader Strategic and Political Implications of the World Financial Plunge,” Howard offered insights on the financial crisis based on his experience.

Noting the increased importance of the G20, which has grown to encompass more countries from around the world, Howard pointed out that we still live in world of nation–states and that there is cooperation among them regarding the economic crisis: “The world will come out of the current economic crisis as a result of the sum total of the central policies of individual countries.” Howard believes that, owing to the anxiety of their electorates, newly installed leaders will receive support until people realize that their policies are not working.

The greatest danger of the economic crisis, Howard said, “is not so much its economic impact, but the extent to which it will crowd out the proper priorities we should give to other issues,” warning that security is one of the most important priorities. After discussing the impact of the financial crisis of the 1990s on Asian countries, Howard pointed out that most countries weathered it fairly well. One country, Indonesia, has developed into a democracy despite efforts by Islamic extremists there. Howard also worries about nations going into debt in the belief that it’s going to solve all their problems.

Howard concluded that politics is always about ideas and that it’s important not to let the left win the battle of ideas.

The coauthors of Power, Ambition, Glory—Steve Forbes, former U.S. presidential candidate and publisher of Forbes Magazine, and John Prevas, professor of Latin and classics at Eckerd College in St. Petersburg, Florida–enthusiastically previewed their forthcoming book when they spoke at dinner on Monday night.

The volume (full title, Power Ambition Glory: The Stunning Parallels between Great Leaders of the Ancient World and Today . . . and the Lessons You Can Learn to be published in June by Crown Business) examines the stunning parallels between leaders of the ancient world such as Hannibal and Alexander the Great and contemporary business leaders such as A. P. Giannini and Walter Wriston. It focuses on the qualities and abilities held by innovators and change makers both then and now and the lessons to be learned from all of them.

“What we found was that these leaders didn’t accept things as they were but moved forward to push barriers and, through it all, they knew what mattered,” said Prevas. “They were innovators, builders, and consolidators. They definitely did not play by the rules.”

Reflecting the issues and challenges that dominate the news, the retreat offered presentations on a wide array of topics, international and domestic, including education, government, national security issues, terrorism, and the economy.

Remarks titled “The Hidden Benefits of Education” were delivered by Kevin Murphy, Hoover senior fellow and the George J. Stigler Professor of Economics at the University of Chicago’s Booth School of Business.

Murphy addressed the rising demand for a skilled workforce and the interplay between supply of and demand for that force. Although the premiums for a college education have leveled off, premiums for graduate degree holders and workers with specialized and specific skills have caused pay for those workers to rise even higher.

A discernible inequality in pay and mobility between low-skilled and high-skilled workers has alarmed educators and policy makers, Murphy said. He believes that, despite this inequality, the overall effects have been a large net increase in human capital.

He also said he is concerned that many students who begin college do not graduate. Caused by poor preparation of students in elementary and high school, that problem must be solved so that more high–skilled workers can be produced.

Daron Acemoglu, a professor of applied economics at the Massachusetts Institute of Technology and a member of Hoover’s Property Rights Task Force, discussed “Why Nations Fail: Institutional Foundations of Prosperity and Poverty.”

His research indicates that institutions—the rules imposed by humans such as tax laws, a system of government, an educational framework—are critical to a nation’s success and have been from the start of recorded history. Long–held theories about the effect of geography and culture on a nation and its development and growth offer some truth and insight about national success and failure, he said. But vibrant institutions, directed by the people affected, trump other features and factors.

Acemoglu said the current worldwide economic crisis is related to the failure of financial institutions. He favors reform of those institutions, along with imposing important incentives in law and policy to encourage and sustain growth.

The world has returned to normal, said Robert Kagan, senior associate at the Carnegie Endowment for International Peace, in his presentation “The Return of History and the End of Dreams.” After the end of the cold war, many historians believed that the world had entered a new era, which included the end of ideological competition among governments. This view has proven to be a myth, Kagan said. Although the United States remains a superpower, many great countries, such as China and Russia, have emerged with their attendant ambitions. “We can no longer and never should have believed democracy would spread on its own,” Kagan said. He added that ignoring the spread of other forms of government is a great mistake.

In “Waging a Counterrevolution in the States” Hoover research fellow Clint Bolick, the director of the Scharf–Norton Center for Constitutional Litigation at the Goldwater Institute, discussed fighting the Leviathan at the state and local level. Bolick explained that prosecuting cases at the state level offers an opportunity to challenge policies more successfully. “Freedom is greater at the state level than federal level,” said Bolick. In addition, states provide freedoms that don’t have counterparts at the federal level; at the state level earmarks (provisions that direct how approved funds are to be spent on specific projects) can be challenged.

The Hoover Institution’s expansive collection of materials related to Milton Friedman was celebrated on Tuesday with an audio and video presentation by Richard Sousa, director of the library and archives at the Hoover Institution. Sousa explained that the institution holds 100 linear feet of materials created by and related to Friedman, whom he called a “superstar” and “cultural icon.”

Those attending the presentation viewed clips of Friedman discussing the free-market concept in his well-known television program Free to Choose; the issue of corporate bailouts on The Phil Donahue Show; and parallels between the Great Depression, the Japanese economic failure of the 1980s, and the dotcom burst of 2000 on Hoover’s own program, Those programs are all held in the Hoover Archives.

Former U.S. secretary of state Condoleezza Rice discussed national security issues when she spoke on Tuesday. Rice noted that, with the events of 9/11, the demands and expectations of her post shifted radically. The collapse of communism and related national security issues were quickly overtaken by the need to come to grips with rogue states, states sympathetic to terrorists and willing to sell dangerous technology to them, and, more recently, failed and failing states.

“Do we understand terrorists? They understand us,” said Fouad Ajami, a professor and director of the Middle East Studies Program at the Paul H. Nitze School of Advanced International Studies at Johns Hopkins University. In his presentation, “From Riyadh to Quettaa: The Islamist Trail, the American Burden,” he discussed the changing attitudes of leaders in the Middle East toward Western culture. Where there was once consensus around a modern view, that balance was altered in the Islamic world in 1979 with the fall of the shah of Iran, Ajami said.

The economic crisis was analyzed in a panel discussion titled “Coping with Catastrophe: How the Economy Can Recover and What Policies Will Be Helpful” that featured Hoover fellows Michael Boskin, John Cogan, Robert Hall, and Edward Lazear and was moderated by John Raisian.

Hall, the Robert and Carole McNeil Senior Fellow at the Hoover Institution, provided an overview of the forces that contributed to the recession: the collapse of the housing bubble, oil prices, and the financial crisis. In his remarks Lazear, the Morris Arnold Cox Senior Fellow and former chairman of the President’s Council of Economic Advisers during the George W. Bush administration, expressed concern that the policies of the current administration will not be helpful. Lazear noted, too, that the policies indicate a growth in government that is not a onetime deal.

“The problem is not in the future, it’s now,” said John Cogan, the Leonard and Shirley Ely Senior Fellow at the Hoover Institution. Cogan said that, to fund the projected outlays of the U.S. federal budget, taxes would have to double. Overall, the U.S. policy has successfully organized our economic system; the bailout program, however, is a major step away from our economic system, warned Cogan.

Boskin noted that the synchronized global recession was very unusual and that it followed a period of the best economic growth. Financing, Boskin said, contributed to the crisis. Beginning in 2007, the government began to understand there was financial insolvency and tried to ease credit selectively. Boskin indicated that how soon and how strongly will the economy recover is uncertain.