The Hoover Institution Board of Overseers convened in Washington, DC, for its 2020 Winter Retreat, which featured discussions by Hoover fellows and senior Trump administration officials, including Vice President Mike Pence and Secretary of State Mike Pompeo. Monday, February 24, 2020 3 min read 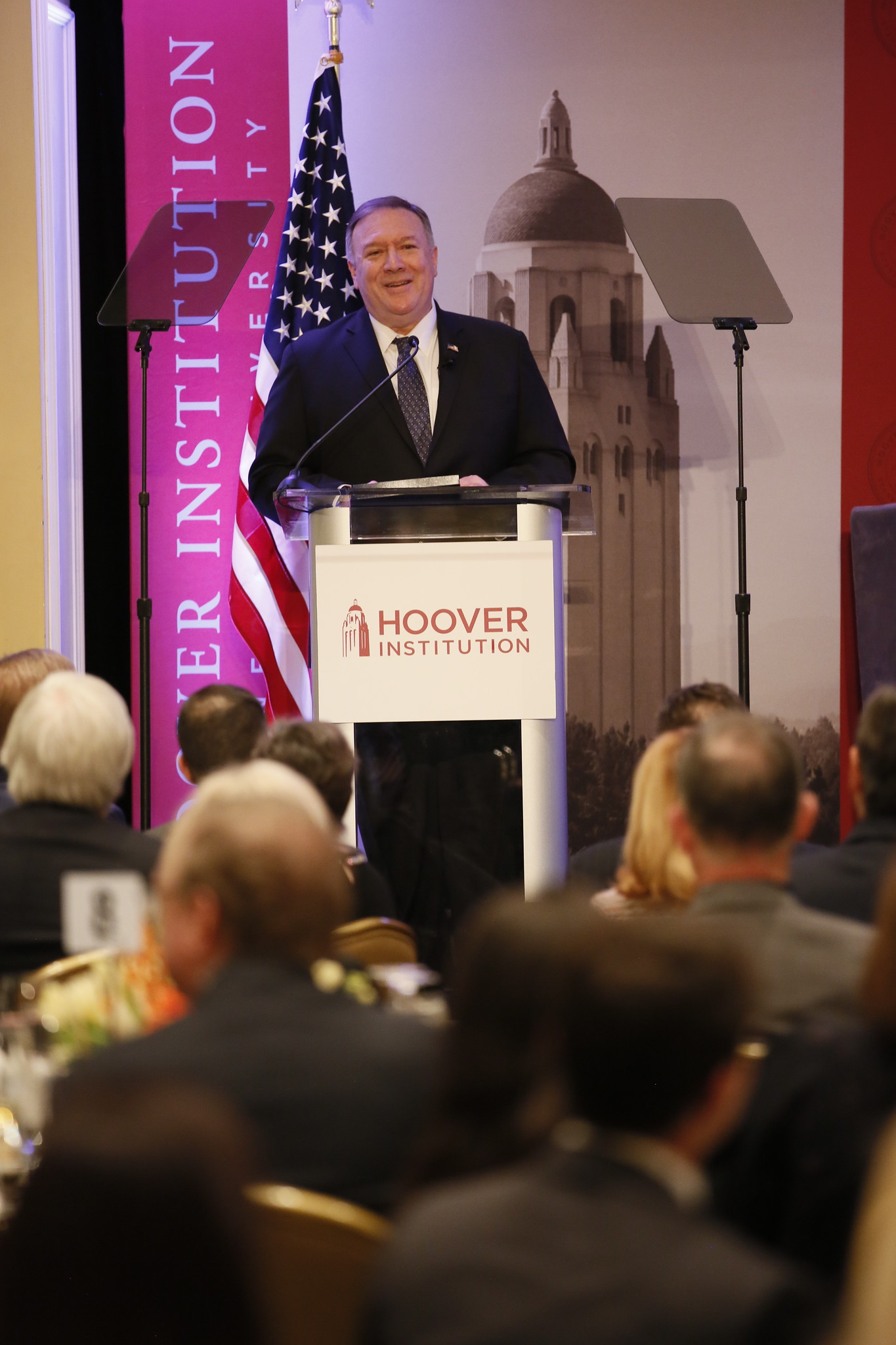 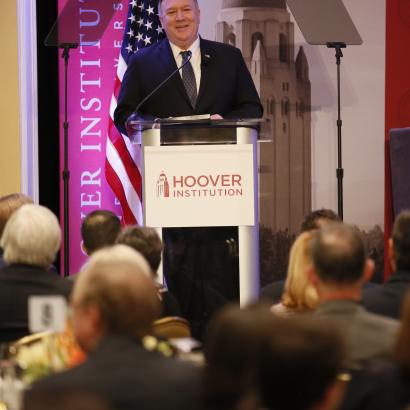 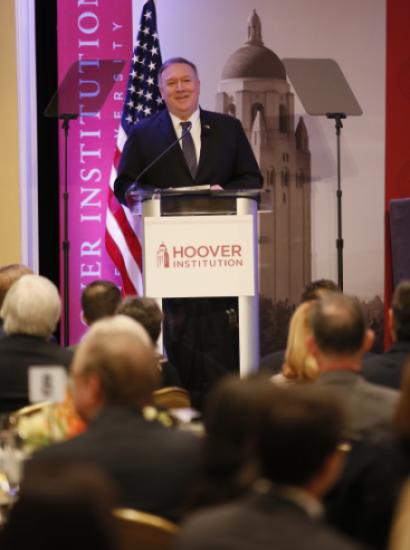 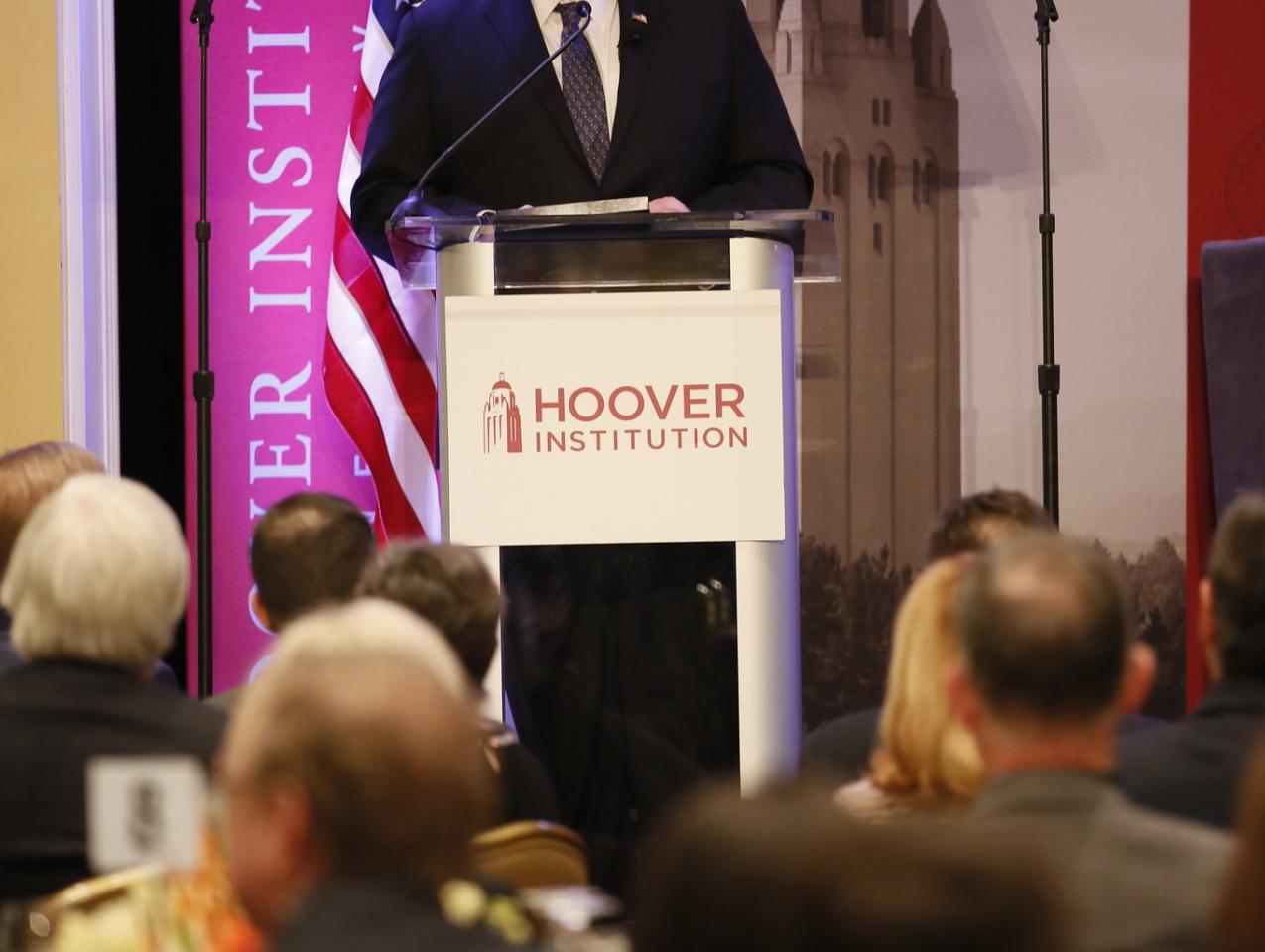 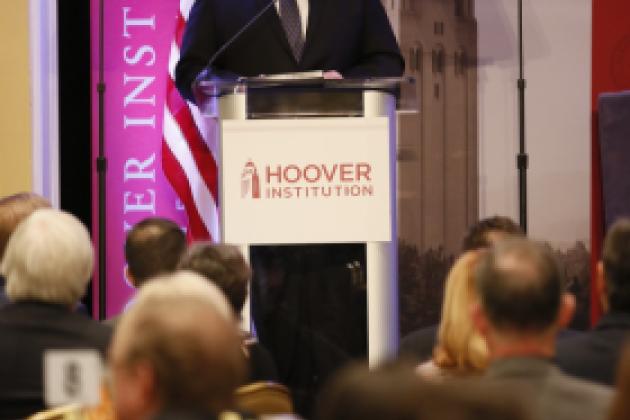 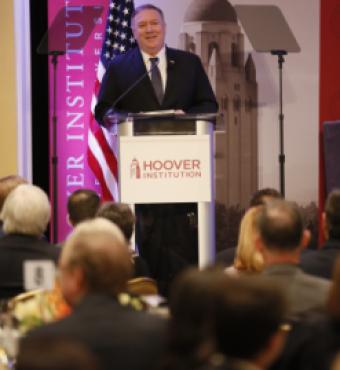 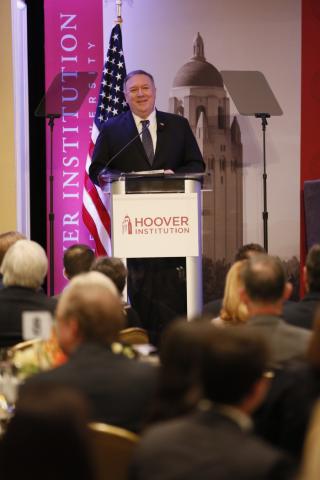 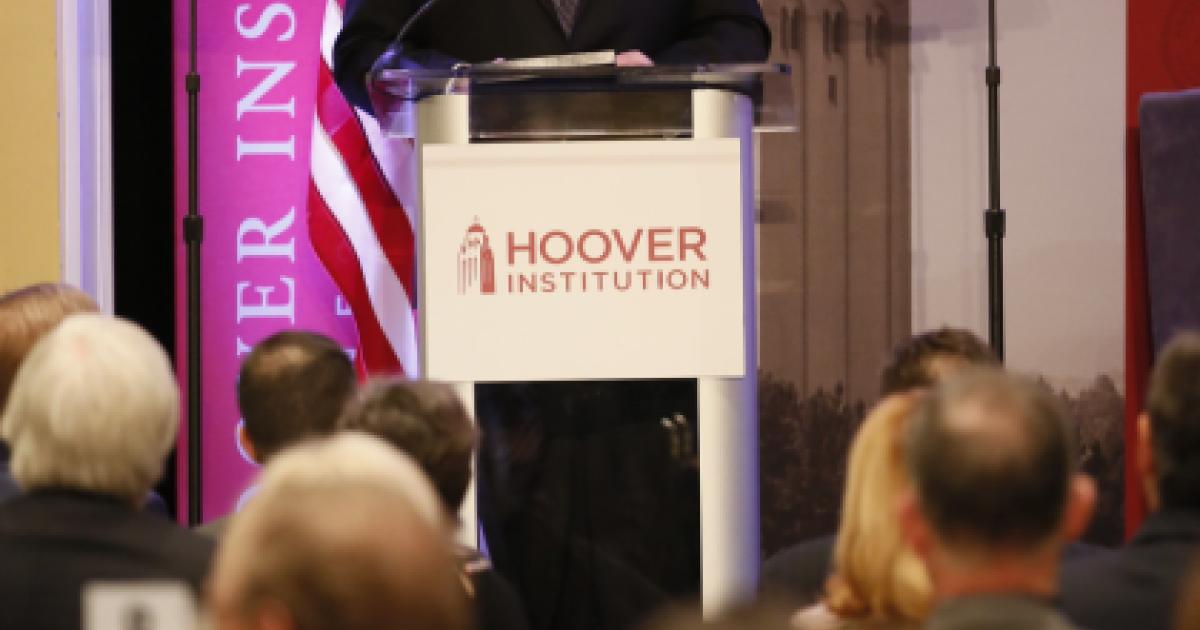 The 2020 Winter Retreat events took place at the historic Willard Hotel, with excursions to the White House grounds and Hoover’s Johnson Center.

Pompeo provided the keynote in the first session, on Monday, February 24. He praised the Hoover Institution as “a national treasure” and updated overseers on America’s diplomatic efforts, including the maintenance of a new treaty between the United States and the Taliban; phase one of the US-China trade agreement; and progress on the US maximum-pressure campaign against Iran.

Also on Monday, Senior Fellow Gary Roughead provided an update on China’s commercial and military activities as they pertain to US interests. He was followed by Distinguished Visiting Fellow Kevin Hassett, who warned about the possibility of a mid–election year economic downturn. The uncertainty of COVID-19 (novel coronavirus) factored in the analysis of both presentations.

Hassett’s assessment was based on a study he conducted some years ago. As former chairman of the White House Council of Economic Advisors, he said the Trump administration was well aware of a potential economic stall but that officials were working to reinforce free-market reforms to mitigate its impact. Hassett believes that the administration’s economic ideas were guided in large part by the work of Hoover fellows, who maintain that economic freedom and pro-growth policies are the fundamental bases of a thriving economy.

Senior Fellow Scott Atlas gave the third presentation, which was an analysis of proposed Medicare for All policies. Atlas also offered recommendations, which he communicated to Congress and the administration, about reforming the policies of the Affordable Care Act (Obamacare) and securing more affordable quality health care on a national basis.

Visit to the White House

That afternoon, the overseers visited the Eisenhower Executive Office Building at the White House, where they attended a talk moderated by Hassett. The talk included current members of the Council of Economic Advisors (CEA), including acting chairman Tomas Philipson, incoming Hoover fellow Tyler Goodspeed, and the CEA’s chief principal economist, Josh Rauh, who is on leave from his Hoover Institution fellowship. The discussion delved into their assessments of the current US economy, what 2020 likely portends, and the potential impact of the COVID-19 virus. Rauh described the influential role the Hoover Institution has in crafting administration policy, and how, historically, Hoover has advanced free-market initiatives against the tide of government’s natural tendency to assert more centralized control over the economy.

Following the CEA briefing, Vice President Pence sat down for an interview with Distinguished Policy Fellow Peter Robinson, host of Hoover’s flagship video and podcast interview series, Uncommon Knowledge. The vice president’s remarks included a spirited plea for Hoover to reach out to younger generations and help “tell the story of freedom—and tell the story of socialism” (which Hoover is doing through initiatives such as PolicyEd and Summer Policy Boot Camp).

“Free markets are the best path to prosperity,” Pence said. “We can win the argument. We have history on our side. . . . The younger generation loves freedom. But they need to be shown with facts.”

Hoover’s Role in the Cause of Freedom

On Monday evening, US Secretary of Education Betsy DeVos addressed the overseers and recounted the fierce and often uphill struggle for the cause of school choice against obstacles put into place by vested interests and teachers’ unions. She painted a picture of a multifaceted, incremental, but steady effort to implement innovative ways to help children trapped in inadequate schools, and thanked Hoover supporters for helping light the way.

In a Tuesday luncheon, US Representative Liz Cheney discussed the divided political culture and the high stakes at play in Washington about the future of the country. She emphasized the need for Hoover’s values and ideas to remain front and center in policy debates at this critical time.

The next session featured US Representative Dan Crenshaw and Senator Ted Cruz, members of Texas’ congressional delegation. Rep. Crenshaw gave an update on the progressive movement’s efforts to dominate Texas politics. Senator Cruz offered an analysis of the current presidential race and his perceptions on the current ideological struggle on Capitol Hill between politicians who prefer free market capitalism versus others who desire greater government control over the economy.

“The battle of ideas has never been more important than it is today,” Senator Cruz said. “The great debate is freedom versus socialism. This is an opportunity for all of us to explain the difference.”

The conference finished with a keynote by Larry Kudlow, the director of the president’s National Economic Council.  He engaged in a substantive discussion on economic policy with Hoover fellows and overseers, including a defense of the administration’s tariffs against China and a comparison of the Reagan and Trump administrations, both of which Kudlow served.

He told Hoover overseers that he believes the Trump administration is “unwinding the power of government and letting people be free to succeed.”