Notable News and Events in 2016

As 2016 comes to a close, we look back at a busy year at the Hoover Institution. There were many noteworthy activities and initiatives at Hoover as the Institution works to advance policy ideas that promote economic opportunity and prosperity, while securing and safeguarding the peace for America and all mankind. Wednesday, December 21, 2016 6 min read 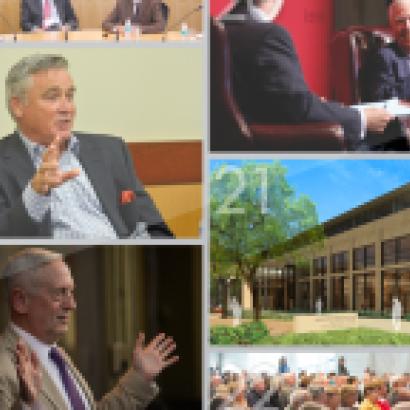 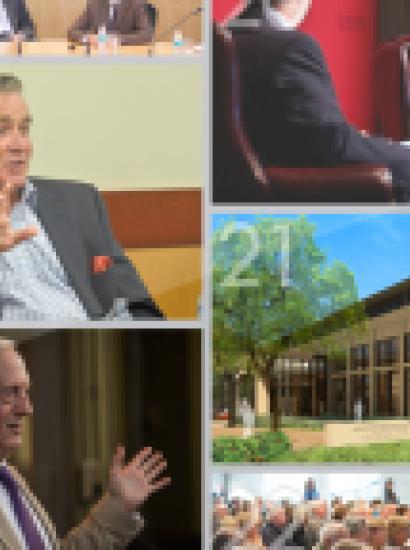 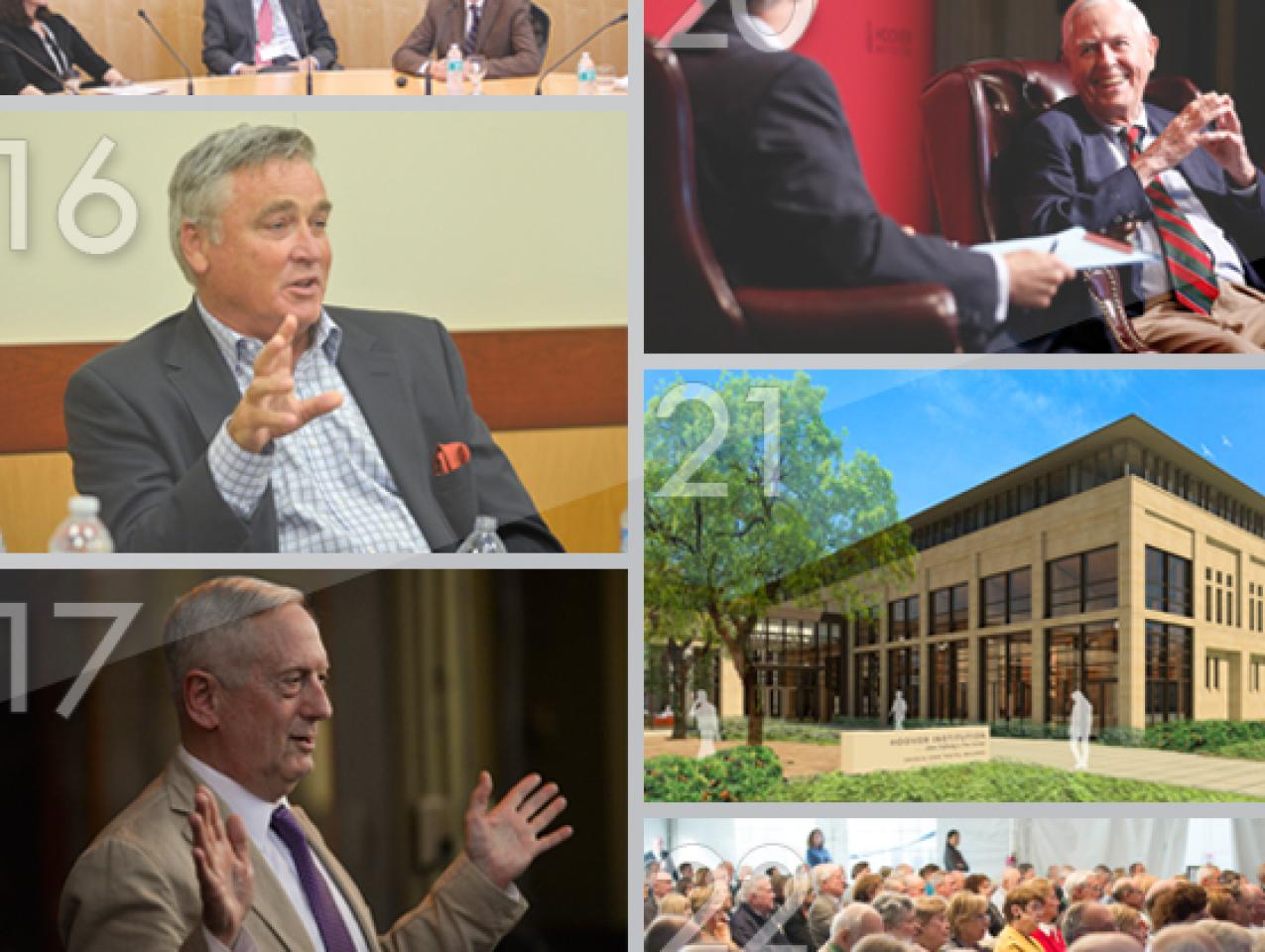 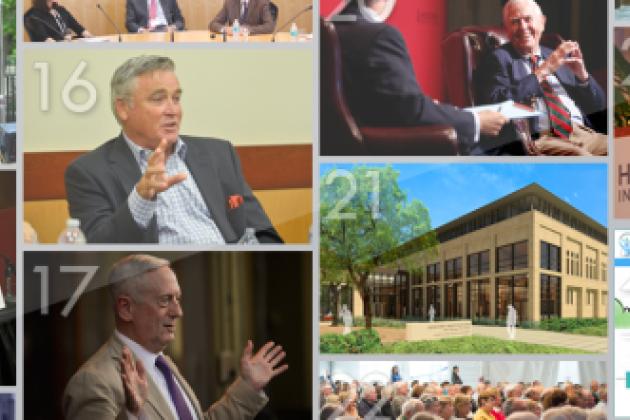 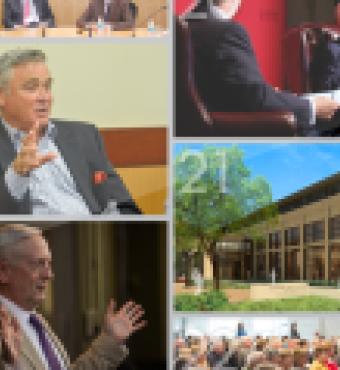 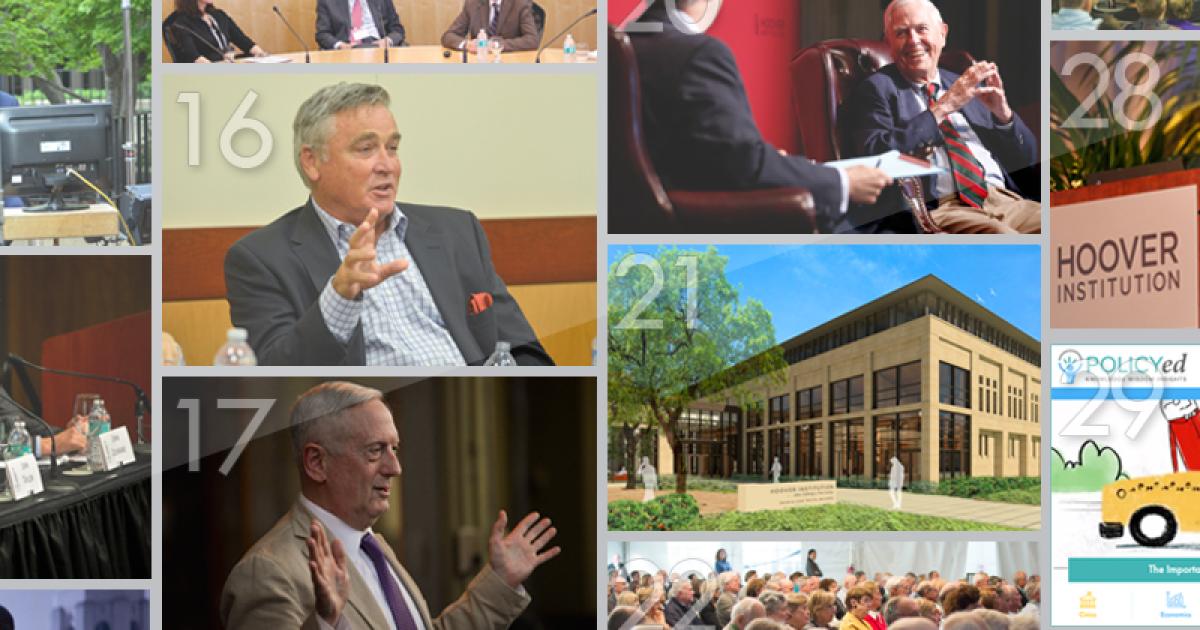 As 2016 comes to a close, we look back at a busy year at the Hoover Institution. There were many noteworthy activities and initiatives at Hoover as the Institution works to advance policy ideas that promote economic opportunity and prosperity, while securing and safeguarding the peace for America and all mankind.

General Jim Mattis Nominated To Be Twenty-Sixth Secretary Of Defense

General Jim Mattis, the Davies Family Distinguished Visiting Fellow at the Hoover Institution and former commander of US Central Command, has been nominated to serve as the twenty-sixth secretary of defense in the administration of President-Elect Donald Trump.

The Hoover Institution Press released Blueprint for America, a nonpartisan road map outlining basic policies that should be priorities for the next president and Congress. Scholars at the Hoover Institution—professors, thinkers, and practitioners of global renown in their respective fields—offer a series of accessible policy ideas for a civic, economic, and security architecture to shore up the long-term foundations of American strengths.Blueprint for America takes a beyond-the-Beltway look at the policy agenda that the writers would like to see in January 2017. Economists Michael Boskin, John Cogan, John Cochrane, and John Taylor address questions of entitlement reform, deficits, monetary reform, national debt, and regulatory and tax reform. Scott Atlas draws on his medical experience to tackle the Affordable Care Act and propose incentive-based health care reforms. Eric Hanushek addresses the current performance—and benefits from reform—of K-12 education. Admiral James Ellis (retired), General Jim Mattis (retired), and Kori Schake offer their visions of how to restore America’s national security through proactive and realistic agenda setting. James Goodby expounds on the country’s practice of diplomacy in a time of turbulent transition. Throughout, George Shultz narrates clear-eyed observations on spending, human resources, foreign policy, the environment, and, in conclusion, the art of governance.

There may be no such thing as a free lunch, but thanks to the Hoover Institution’s new website, Collected Works of Milton Friedman (http://miltonfriedman.hoover.org), the public will be able to freely access hundreds of Milton Friedman’s articles, lectures, and other works from anywhere in the world.

The 2016 Fall Retreat on AMERICAN exceptionalism

Each of Hoover’s biannual retreats features numerous talks by fellows on recent research and current events, connecting the institution’s supporters with the initiatives and scholarship made possible by their partnership. For the 2016 Fall Retreat, which took place during October 16–18, the talks were for the first time organized around a single theme: American exceptionalism. The resulting agenda developed by Hoover fellows offered an in-depth exploration of our exceptional qualities as a nation and what these characteristics tell us about our past and our future.

On September 13, 2013, the Hoover Institution partnered with the Becker Friedman Institute at the University of Chicago to host a daylong conference titled “Elections, Policymaking, and Economic Uncertainty.”

Welcoming JOEL PETERSON, New CHAIRMAN OF THE BOARD OF OVERSEERS

On July 27th, Norman Naimark, a senior fellow at the Hoover Institution and Freeman-Spogli Institute and Robert and Florence McDonnell Professor of Eastern European Studies at Stanford, delivered a talk entitled "Before the Cold War: Europe and Stalin, 1944-49." Professor Naimark's talk was the keynote address of the Hoover Library & Archives 2016 Workshop on Authoritarian Regimes, which brings together scholars from across the world who use Hoover collections to study dictatorship and the global effects of totalitarian states. Naimark, who has researched at Hoover for nearly fifty years, claimed Hoover to be "the most interesting archive in the world."

“Reagan’s Soviet Policy As A Guide To Dealing With Iran, North Korea, And Other Rogue Regimes”: A Roundtable Discussion In Memory Of Harry Rowen

The nonviolent resolution of the Cold War owed much to the Reagan administration’s work to bring about a peaceful regime change from within the Soviet Union. Reagan based his strategy on an insight from Hoover Institution senior fellow Henry R. “Harry” Rowen, who showed that beyond the Soviet veneer of military power laid an exhausted economy and unstable regime that could be pushed over the brink of collapse. The Hoover Institution convened a roundtable forum entitled “Reagan’s Soviet Policy as a Guide to Dealing with Iran, North Korea, and Other Rogue Regimes,” featuring Hoover’s leading experts on international diplomacy: George P. Shultz, Charles Wolfe Jr., Kori Schake, Michael McFaul, Abe Sofaer, and Abbas Milani, moderated by Paul R. Gregory. Hoover dedicated the panel to the memory of Harry Rowen, who helped Yarim-Agaev develop the roundtable before his death in November 2015 at age ninety. Rowen, whose research papers are in the Hoover Archives, would have added much to the conversation.

The Hoover Institution presented a screening of "American Umpire" on Tuesday, April 26, 2016. Research Fellow Elizabeth Cobbs held a question and answer session after the film with Francis Fukuyama, David Kennedy, and Morris Fiorina. American Umpire explores how the United States assumed such a prominent role in world order. Through a series of outstanding interviews with prominent policy makers, scholars, military leaders, and journalists, the film explores possible policy options for the future. American Umpire offers a balanced view and is an alternative to partisan hyperbole of the 24-hour news cycles and social media that paints foreign policy choices in black and while as either irresponsible isolationism or war-mongering engagement.

A Tribute To Robert Conquest

On January 25th, Hoover Institution fellows and affiliates joined to celebrate the life and career of Robert Conquest, a preeminent Cold War scholar who became an expert on the abuses of the Soviet regime under Stalin. Conquest, who died on August 3, 2015, spent 28 years as a Senior Research Fellow at the Hoover Institution, and was curator of the Russian and Commonwealth of Independent States Collection of Hoover Library & Archives between 1981 and 2007. A collection of his papers is held at Hoover Library & Archives.

The Hoover Institution hosted "U.S. Foreign Policy Opportunities and Challenges" on Wednesday, June 8, 2016. The next administration will have numerous opportunities to advance U.S. interests around the world. At the same time, few U.S. presidents will face as many threats and challenges as those that await the next president. POLITICO Editor Susan Glasser moderated a panel discussion between former Congresswoman Jane Harman, Under-Secretary-General of the United Nations Dr. Jane Holl Lute, and Hoover Senior Fellow Dr. Amy Zegart, discussed these opportunities and challenges.

Hoover Fellows At Your Fingertips: Hoover Institution Launches Content On SmartNews And Flipboard

"A Better Way?": Assessing Proposed Reforms For The Administrative State

The Hoover Institution hosted "A Better Way?": Assessing Proposed Reforms for the Administrative State" on Thursday, October 20, 2016. Critics of recent trends worry that the administrative state has grown in size and power enormously in recent decades, and see Congress as ceding too much of its authority. The combined growth of agencies’ power and the reduction of accountability has led critics to call for major reforms in the administrative state to make it more consistent with the intent of the U.S. Constitution, and more constrained by “rule of law.” Speaker Paul Ryan recently unveiled his comprehensive program – “A Better Way” – to address these and other problems through a series of reforms. The Hoover Institution’s Regulation and the Rule of Law Initiative assembled a group of experts to consider Speaker Ryan’s reforms.

Finally, Hoover mourned the loss of three fellows this year. While their intellectual contributions to the Institution and society will live on, their presence and continued work will be greatly missed.

Sidney D. Drell was an emeritus senior fellow at the Hoover Institution at Stanford University and a professor of theoretical physics emeritus at Stanford’s SLAC National Accelerator Laboratory, where he served as deputy director until retiring in 1998. An arms control specialist, he has advised the executive and legislative branches of government on national security and technical defense issues for more than four decades. From 1983 to 1989, he was the founding codirector of Stanford’s Center for International Security and Arms Control.