Lt. Col. Jennifer Ann Branigan Carns, representing the US Air Force, is a National Security Affairs Fellow for the academic year 2021–22 at the Hoover Institution. 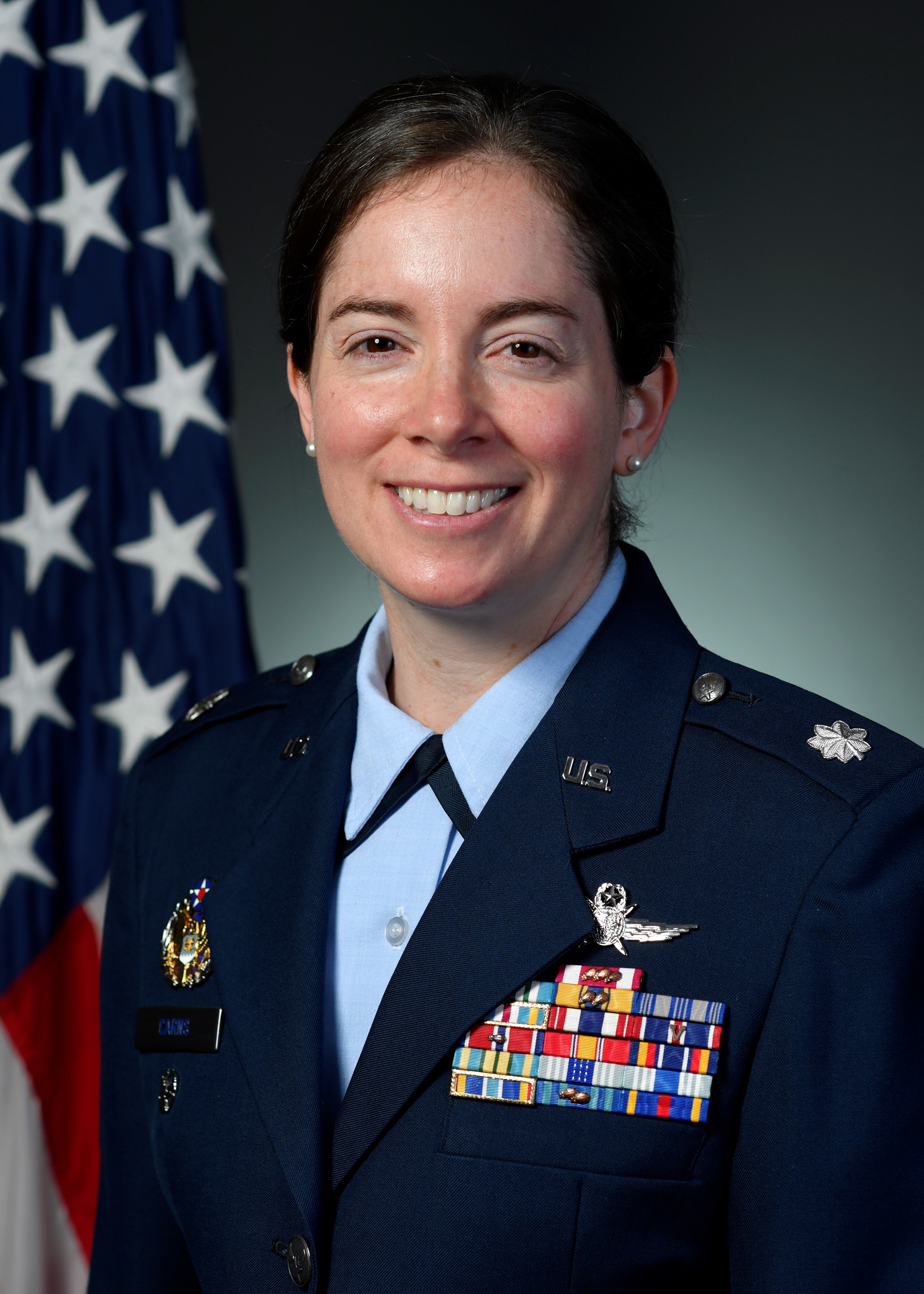 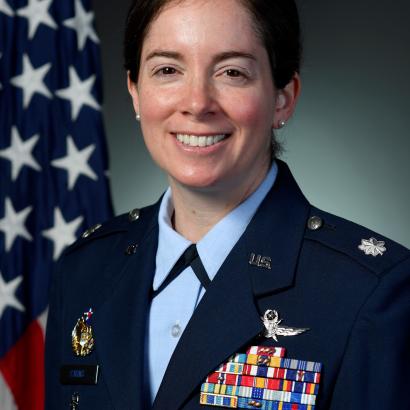 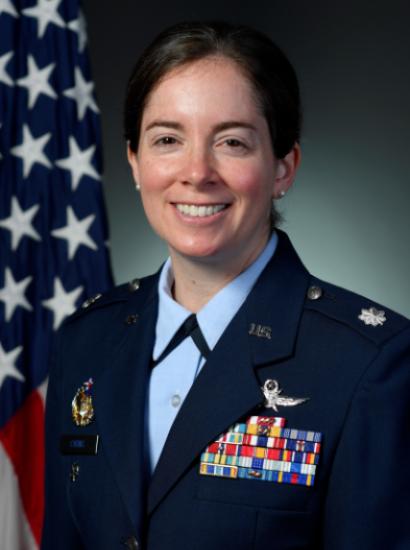 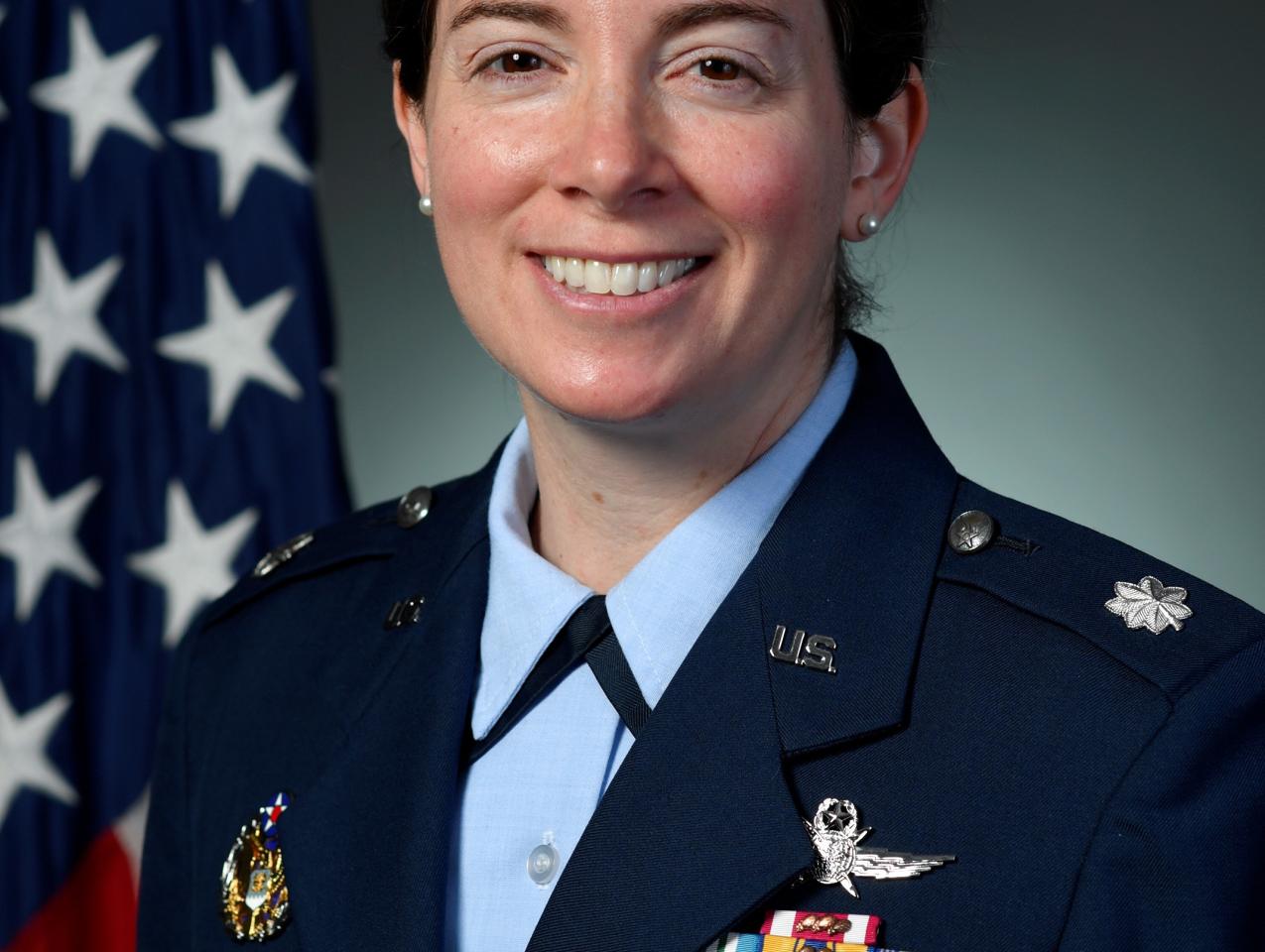 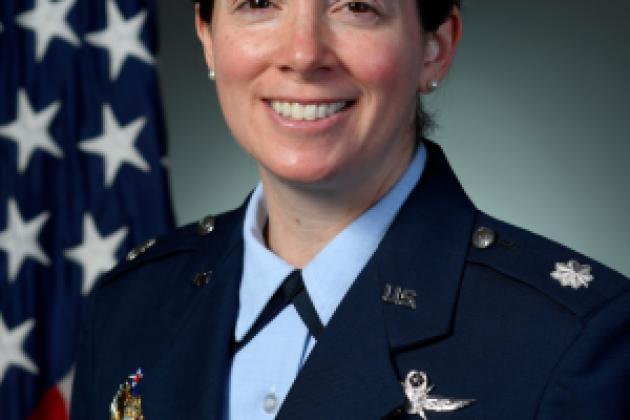 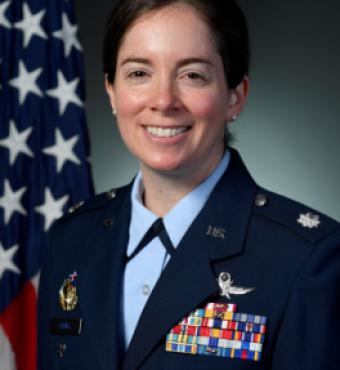 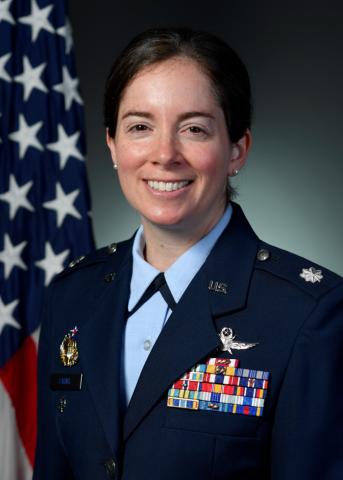 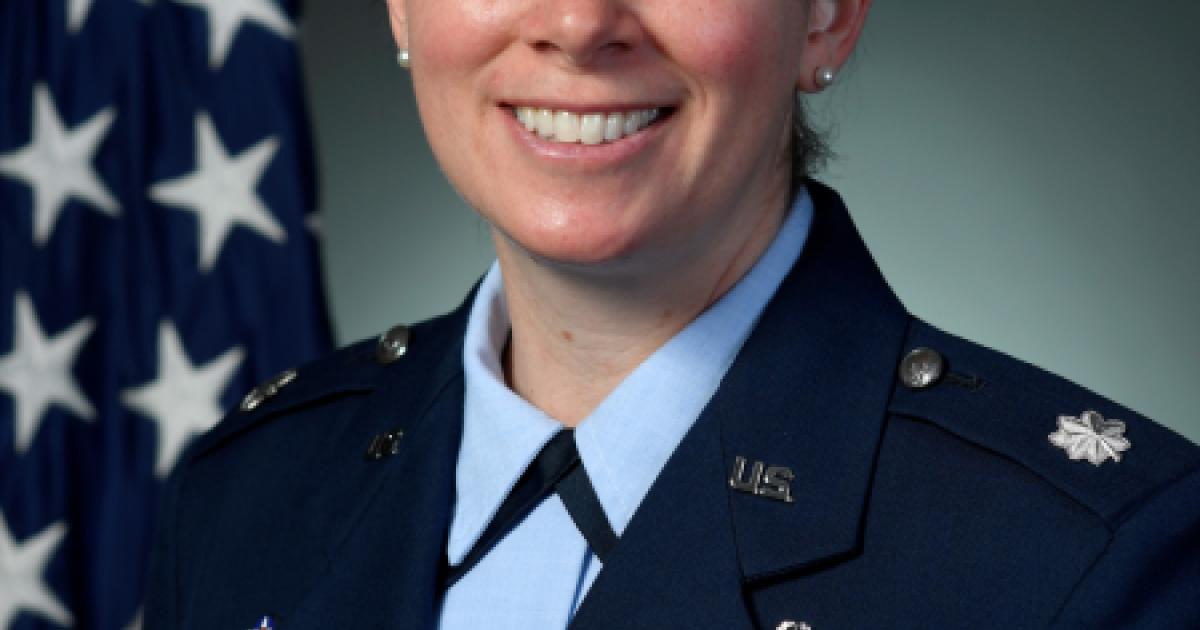 Lt. Col. Jennifer Ann Branigan Carns, representing the US Air Force, is a National Security Affairs Fellow for the academic year 2021–22 at the Hoover Institution.

In this interview, Carns discusses her work as a cyber operations officer in the US Air Force, specializing in expeditionary communications.

She describes her various deployments, including missions in which she and her team managed networks and built communications infrastructure for American forces stationed in Southwest Asia and the Middle East. She also details her team’s work in supporting disaster relief efforts after hurricanes devastated Puerto Rico in 2017 and Tyndall Air Force Base in 2018.

Finally, Carns talks about her study at the Hoover Institution on the intersection of cybersecurity and artificial intelligence (AI). She argues that a key factor in maintaining the US military’s competitive edge is how well it adapts to AI and provides safeguards against its vulnerabilities. She maintains that the military should work closely with the private sector to ensure that the best and most applicable technology is made available for the defense of the nation.

Why did you join the US Air Force?

It really comes down to patriotism. When I was in high school, a couple friends of mine were accepted to West Point and The Citadel and I thought it was admirable they were going to serve their country. I had been accepted to the University of Florida and was prepared to start classes in the fall. When my parents first took me to Gainesville a couple months prior to classes starting, I saw an ROTC table at student orientation and was interested in signing up.

When we went back to the hotel that night, I asked my parents, “Army or Air Force?” My mom replied, “This is definitely a question for your father.” He had served a few years in the Army and recommended joining the Air Force. There is a saying, “The best Air Force recruiter is an Army parent,” and I am living proof of that.

Will you talk about your academic background?

I studied decision and information sciences at the University of Florida and took a lot of courses in computer programming. I graduated with a bachelor’s and master’s degree through a combined degree program and commissioned into the Air Force. Since then, I received another master’s through Air University.

How did you pursue a career as a cyberspace officer?

When I originally joined the Air Force, I was a communications officer. However, my career field changed about 11 years ago into the cyberspace officer career field in which there are four tracks: offensive and defensive cyberspace operations, Department of Defense Information Network operations, and expeditionary communications. My career has largely focused on expeditionary communications, which involves establishing and maintaining communications infrastructure in remote locations to support Air Force missions. Throughout my career, I have worked on teams that do everything from setting up computers and modernizing airfield navigation systems and air traffic control towers to planning and establishing base requirements and ensuring computer and information security standards are met.

Where have you been deployed?

I have deployed four times throughout my career, all to various locations in the Southwest Asia, or SWA, theater under the US Central Command’s area of responsibility. My first deployment was as a second lieutenant, the lowest ranking officer in the Air Force, where I helped support communications for the approximately one thousand personnel on base, ensuring leadership had connectivity to link into our theater hub and reach back to the United States.

My next deployment was a couple years later to a base where I helped design and stand up a technical control facility, enabling fast, reliable, and secure communications from that base to all other locations in theater and the United States.

A year later, I deployed to the Combined Air Operations Center in SWA, which serves as the command and control hub alongside our partners and allies, integrating and synchronizing information to enable senior leaders to make real-time strategic decisions and provide commander’s intent for mission execution.

For a third consecutive summer, I had another amazing opportunity to deploy. This last deployment was a full year and I was based out of the Naval Support Activity base in Manama, Bahrain. This was my first command and the responsibility of my team was to oversee postal operations throughout the theater. Although some of my team and I were stationed in Bahrain, I had forty-four personnel working at operating locations in Saudi Arabia, Egypt, and Kuwait. We visited with the direct members of the team as well as personnel in deployed post offices in Iraq and Afghanistan. While we knew the mission was an important one, it was really special to see the tremendous impact it made. For example, one of my airmen was awaiting his mom’s package which contained her homemade cookies. He came by the post office every day asking if the box had arrived. Finally, at about the six-week point, his mom’s package came. While its contents were not entirely edible, that was not the point—he had received a reminder of home. These small things in life are just incredible for the morale of our troops.

It was also a great deployment because it was where I met my future husband, now a retired Coast Guard member. My small unit was located in the Coast Guard building and while the commodore tried to recruit me to become a Coastie, I instead decided to marry one!

Can you describe some of the biggest challenges of your career?

My command of the 85th Engineering Installation Squadron from 2017–19 at Keesler Air Force Base in Biloxi, Mississippi, presented a series of challenges, but it was also by far my most favorite assignment and the hardest of my three command guidons to relinquish.

During this assignment, we provided project support for several bases in the United States and abroad as well as for customers like Special Operations Command and the White House Communications Agency. Additionally, we were called upon to assist with the disaster relief after hurricanes Maria and Michael. While supporting the efforts in Puerto Rico, the team worked closely with various government agencies to rebuild communications infrastructure to the island. The majority of communications towers were toppled over from the strong winds and the team worked hard to reestablish the island’s connectivity. One of my airmen was originally from Puerto Rico and had a lot of family still living there, to include an aunt who worked at the convention center in San Juan. This relationship was pivotal because it helped support our logistical planning as well as our capabilities in providing humanitarian relief to people whose lives were devastated by the hurricane. In the case of Hurricane Michael, the team members helped the base reestablish the communications networks. They hit the road immediately—so soon after the hurricane that they needed to purchase a chainsaw along the way to clear parts of Interstate 10 and minor roads of fallen trees so they could drive to Tyndall Air Force Base in Florida.

It was an amazing team of professionals and we accomplished great things together. I still hear from many of the airmen I worked with in that unit. They call to tell me they were promoted or got selected for a certain position and sometimes they are seeking advice or just wanting to say hello. I feel privileged to have been a part of that organization.

What will be your research focus during your fellowship?

I am focusing on the intersection of cybersecurity, artificial intelligence, and national security and how cybersecurity is “baked in” to artificial intelligence technology. I had taken one course on AI when I was in college. The subject has always fascinated me and is one which the military is gravitating toward. Specifically, I want to look at how the US Air Force, and the military in general, can safely and securely provide AI technology. This capability can automate functions and improve processes, making information gathering and data analysis more efficient and assisting decision makers.

How secure is it? Does it provide accurate information? Are the algorithms tainted or data biased? These possible vulnerabilities are a cause for concern. There are the infrastructure, funding, and talent management pieces as well. How does the military work more with industry to advance AI? How do we educate our forces so that they have sufficient knowledge to oversee and operate AI technology? Ultimately, we should acquire the best technology applicable to defense and work together to prioritize education of these systems to further national defense.

Can you describe your work with the student mentees from Stanford University?

It has been absolutely rewarding to work with the mentees. Collectively, the NSAFs teach a class of twenty-four Stanford students about public policy. Each NSAF is assigned three mentees and we get together outside of the larger class to focus on topics ranging from student life at Stanford to what it means to be a public servant to comparing notes on a book the four of us read. While they say they learn a lot from the class, I take away a lot from them as they ask astute questions and provide different perspectives—it has been a great opportunity.

Is there anyone at Hoover who has made you think differently?

I appreciate the fact the fellows at Hoover have been so accessible and open to discussion. As my research adviser, Dr. Amy Zegart provides great advice and has been very helpful.

I attend a lot of the programs offered by the Hoover Institution and Stanford. Although many of the seminars are not specifically related to cybersecurity and AI, they broaden my perspectives about policy disciplines that are also crucial to the security and prosperity of America. Following forums that have included experts in cyber and AI, I have asked these folks for short meetings in hopes that I can pick their brains. Thus far, I have been grateful that everyone who I reached out to has been amenable to speaking with me.

What does leadership mean to you?

Leadership means inspiring others to accomplish a common goal.

A leader will ensure the mission is carried out but they also need to take care of their organization’s most precious resource—its people. There is a reason a team is made up of more than one person—without people, you cannot accomplish the mission.

A leader needs to communicate well, actively listen, stand up for what is best for the organization, and be honest with themselves and their people. They should challenge the team to be more than they think they can be. Leadership is about walking around and knowing their people so they can leverage their strengths.

I firmly believe that people can achieve great things together if their relationships are founded on trust. A leader must establish a culture that promotes trust, motivates and empowers his or her subordinates. If you let them run something, guide them but stand out of their way. Sometimes subordinates can develop more creative and efficient ways to approach a problem than what I would have thought to do—it also means a leader needs to possess humility.

I think one of the best leadership quotes is from the late Secretary Colin Powell: “You'll know you're a good leader when people will follow you … if only out of curiosity.” It is so important to remember a leader will make an impact—they just need to ensure it is a good one.