Vivian Balakrishnan, the foreign minister of the Republic of Singapore, joined Fouad and Michelle Ajami Senior Fellow H. R. McMaster for an in-person episode of Battlegrounds, filmed in the Hoover Tower at Stanford University earlier this month. 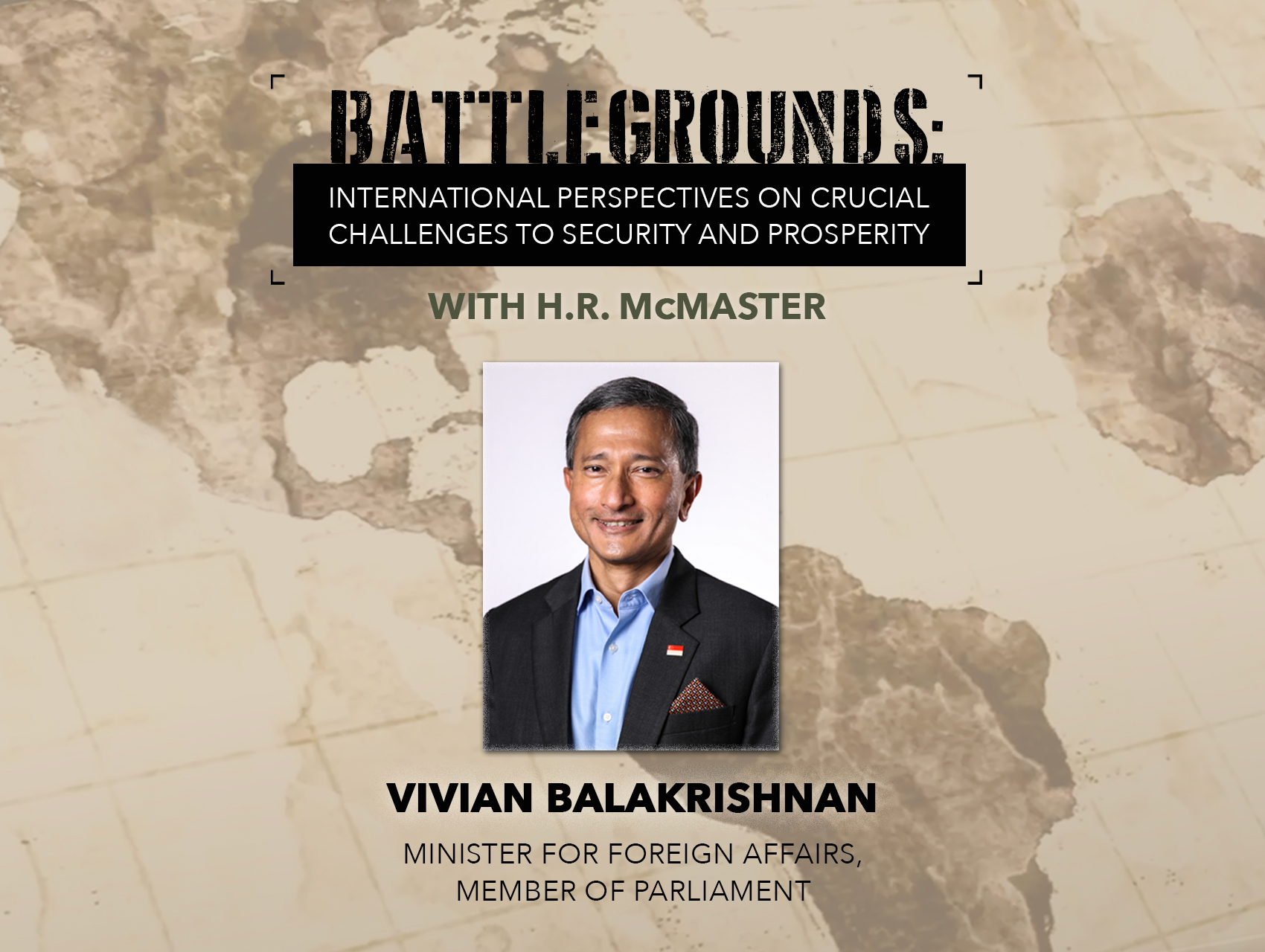 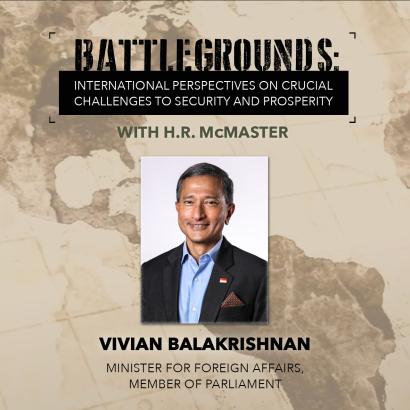 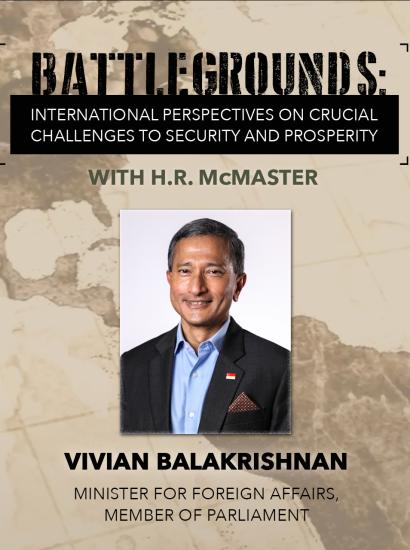 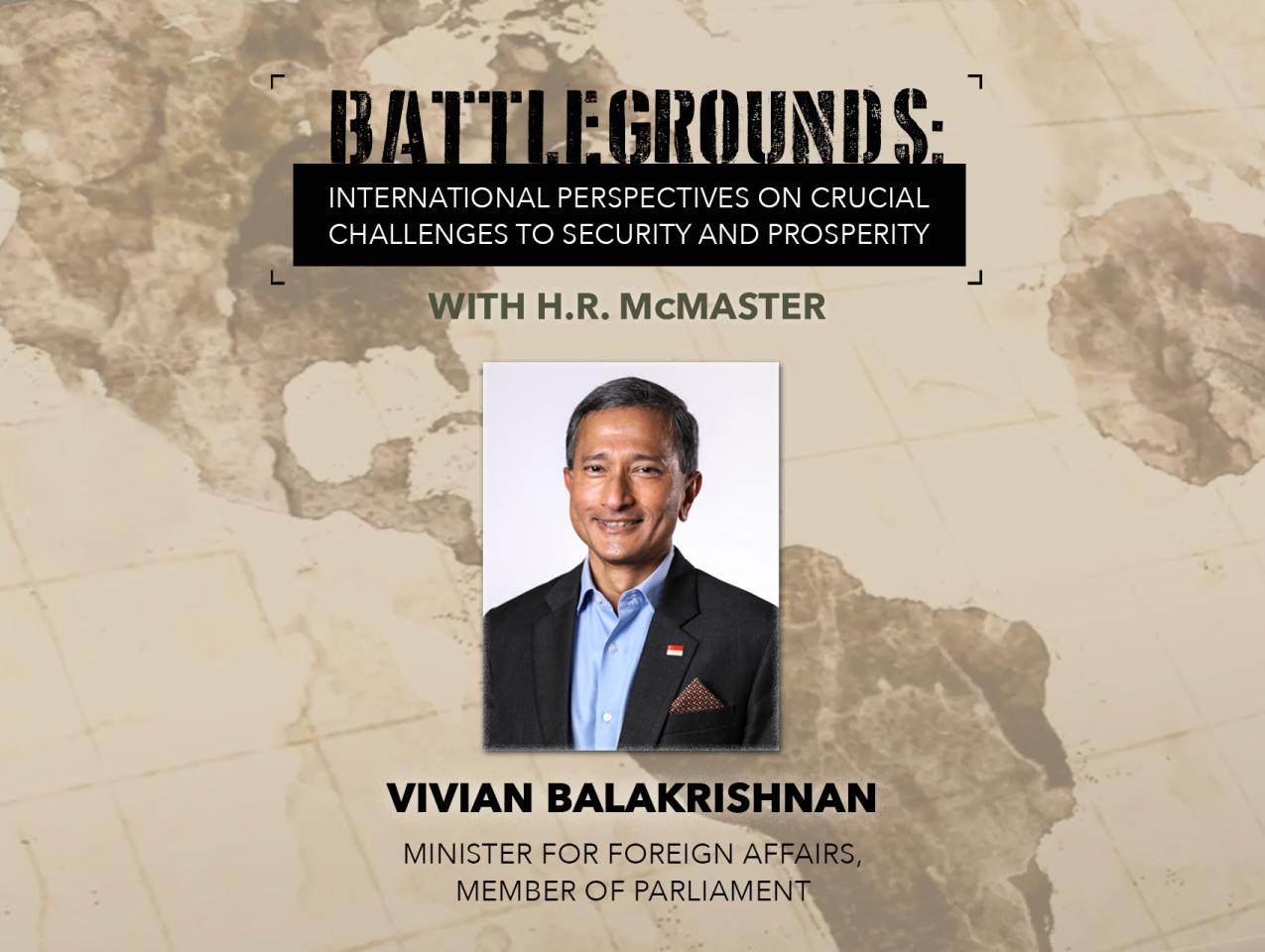 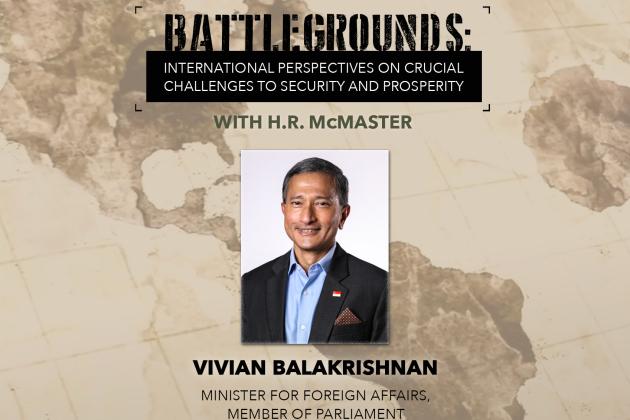 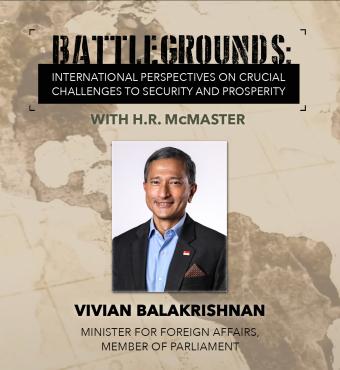 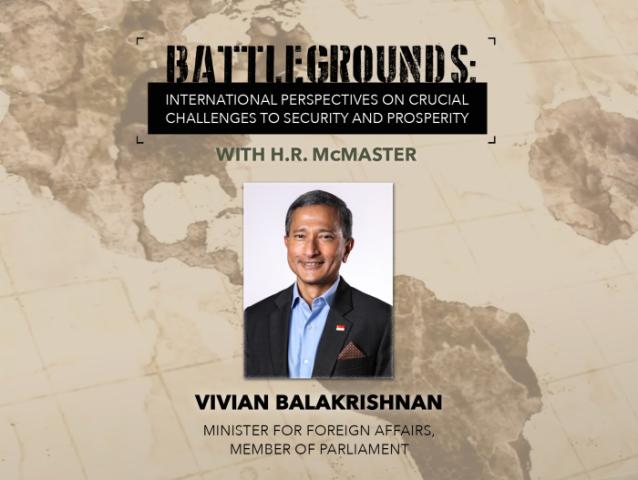 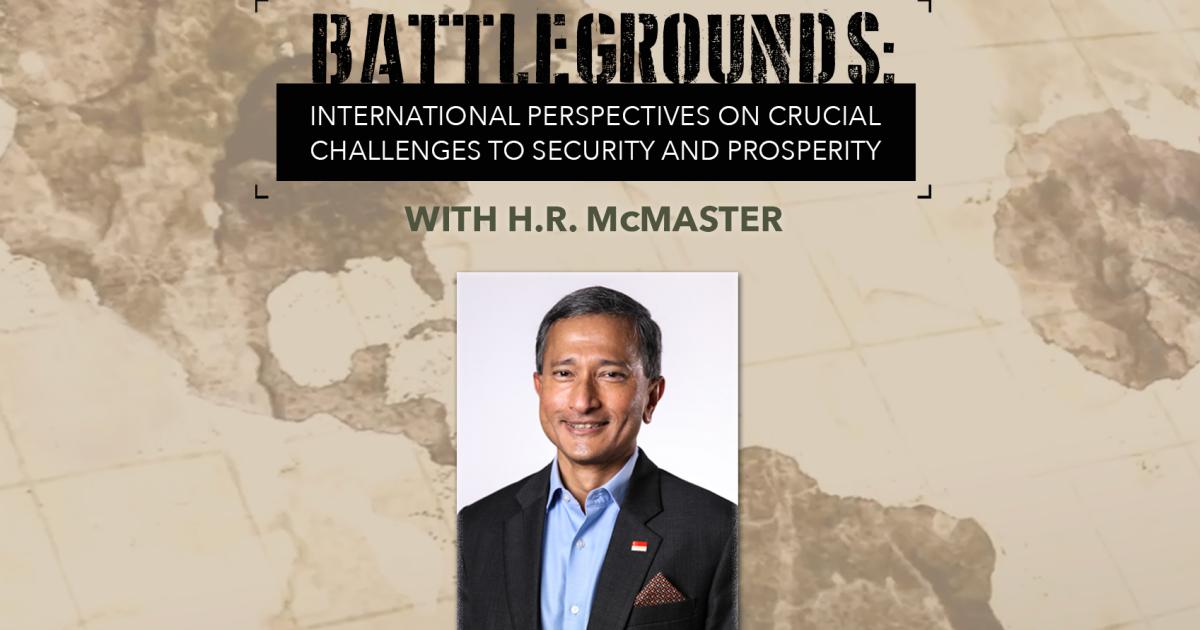 In the episode, which aired on Wednesday, July 27, Balakrishnan described the economic success of Singapore since its founding fifty-seven years ago; the importance of stable US–China relations for global peace and prosperity; and how American engagement in Southeast Asia has provided enormous benefits to the region.

He explained that for Singapore, a city-state just 283 square miles in size, the acceleration of its internal political development and the expansion of its economy, as well as its continued eagerness to forge peaceful relationships with its neighbors, are existential to the survival of the small nation, which lies at the tip of the Malay Peninsula. According to the World Bank, Singapore boasts a GDP growth that is among the highest in the world. Its largest areas of income growth are in the information, communication, finance, and insurance industries. It has also become a global leader in the digital economy, especially in engineering robotics.

Singapore is among the highest-ranking countries in terms of property rights, economic freedom, and government integrity. The World Bank’s Human Capital index rates Singapore as the top country in human capital development, which means that its governing institutions and society make substantial investments, with overwhelmingly successful returns, in the education and health care of its citizens, in order to ensure strong future productivity.

“We ask ourselves, what are the ingredients to success? Number one is human talent; number two is a system that is fair and meritocratic, so that the people with the wherewithal and the energy and the enterprise can succeed and be rewarded,” Balakrishnan said. “And the other element you need is peace, because without stability and peace, you can’t invest in the hardware and software to unlock those opportunities.”

Balakrishnan recalled an encounter when sailing with the late Lee Kuan Yew, Singapore’s first prime minister. Looking at the cityscape, Yew told Balakrishnan it was the organization and discipline of its people that built their great nation. Holding on to Yew’s words, Balakrishnan believes Singaporeans have achieved economic success not because of any inherent superiority but because it was the only way for a country with existential vulnerabilities to survive, and to maintain cohesiveness given its diverse ethnic, linguistic, and religious heritage.

Balakrishnan told McMaster that Singapore was a major beneficiary of the United States’ victory after World War II. Singapore was freed from imperial Japan’s occupation and eventually declared its independence from Malaysia in 1965, receiving full recognition from the United States. American generosity helped to underwrite a rules-based order among Asian countries that fostered security and trade in the second half of the twentieth century. He argued that America’s sacrifices to contain communism in Southeast Asia in the 1950s and 1960s gave Singapore time to prove that its market-oriented and democratic model of governance could indeed work.

The People’s Republic of China was also a beneficiary of the postwar American-led order, Balakrishnan argued. Between the nineteenth and twentieth centuries, China had undergone what it calls a century of humiliation from Western powers and an industrialized Japan. Following World War II, China underwent a series of internal crises. It fought a brutal civil war that concluded with national forces escaping across the Taiwan Strait to establish its own government under Chiang Kai-shek. By the end of the 1960s, the mainland was experiencing the adverse consequences of Mao Zedong’s Cultural Revolution, a nationwide movement to purge Communism’s enemies and indoctrinate citizens. In this period, internal divisions within party leadership and an unstable central government couldn’t adequately deliver goods and services to its people.

Beginning with President Nixon’s historic trip to China in 1972 and full normalization of relations by the end of the 1970s, China leveraged its new relationship with the United States to make up for this lost time. This new peace allowed China to lift hundreds of millions of people out of poverty and the nation to emerge as a global economic leader over the past four decades.

“From [the Chinese perspective], what is happening now, the rise to become a competitive peer power with America, is actually a reversion to the norm,” Balakrishnan explained. “If you look in terms of millennia, China’s GDP [has been] 30 percent or more of global GDP.”

However, he underlined that China’s current aggressive mercantilist behavior reflects a necessity to secure its economic position in the face of a looming demographic crisis (due in large part to its one-child policy, implemented between 1980 and 2015). Its working population of nearly one billion people must “become richer before it becomes older,” he explained. China’s total fertility rate is 1.15 percent, which is below the replacement rate of 2.1 percent.

Balakrishnan described how Japan, also, had faced a population crunch more than a quarter of a century ago but was able to reach sufficient levels of per capita GDP, under which its people could maintain adequate standards of living even as costs rose and its economy became less competitive.

He stressed that it is critical for a world grappling with transnational crises, such as the COVID-19 pandemic, that the United States and China repair what has been a deteriorating relationship in recent years.

Toward that ideal, Balakrishnan maintained that the two countries need to set solid ground rules for trade and cooperation, and clear penalties if either side violates agreements.

“I don’t believe that conflict [between the US and China] is inevitable. But having said that, it is also wishful thinking that mutual interdependence will somehow lead to peace. It requires careful and hard work,” Balakrishnan said, adding, “We have to hope that both America and China understand that this is a time, more than ever before, that we need global leadership.”

Balakrishnan also discussed his government’s rebuke of Russia for its invasion of Ukraine. He asserted that for a city-state like Singapore it is crucial that a precedent not take ground in which the international community would turn a blind eye against aggression posed by a large power to a smaller nation. Such actions must be pushed back on vigorously.

Later in the conversation, he stressed that for the United States to reassume its leadership role, it needs to make the right policy choices, especially in the areas of education, immigration, and infrastructure, to close fissures within its society and bolster its economy.

Balakrishnan said that the United States is blessed with many strategic advantages. Protected by two large bodies of water and bountiful in natural resources, America is a resilient nation that has historically adapted rapidly to changing global conditions while maintaining its strength and self-sufficiency. The 680 million people of Southeast Asia are far more vulnerable during crises, whether they be economic, political, or environmental in nature.

Balakrishnan believes that the United States’ decision to back out of the Trans-Pacific Partnership represented a lost opportunity for Singapore and its neighbors, but he is nevertheless hopeful for a favorable geopolitical environment where Southeast Asia cooperation continues to flourish, US–China relations can once again reach a level of stability and certainty, and India emerges as a more significant economic and strategic actor.

“It’s a period of enormous excitement, because there is both danger and opportunity,” Balakrishnan told McMaster. “But if we do it right, it is another set of strong winds behind our sails.” 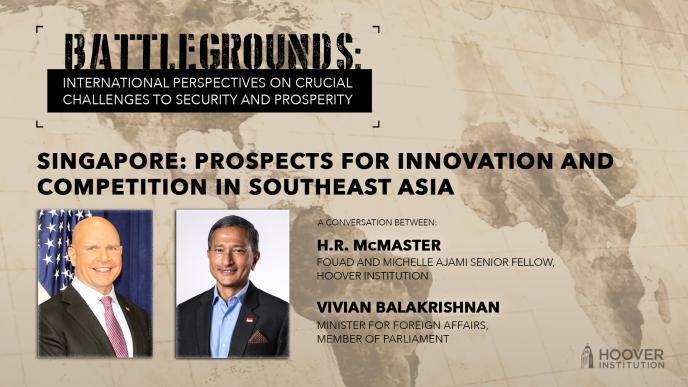