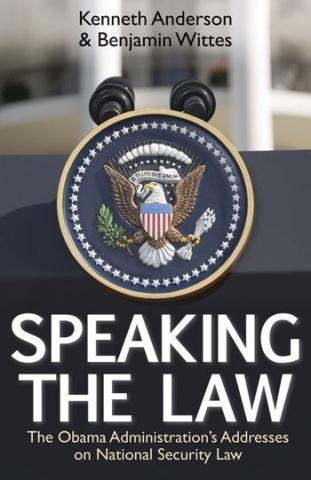 Introduction
Anderson and Wittes offer an overview of the book and describe the Obama administration's extraordinary series of speeches on national security legal issues. Read more

Chapter 1
The first chapter gives an account of what the administration has actually said across a range of critical national security legal questions. Read more

Chapter 2
Anderson and Wittes evaluate the legal framework the government has described: Where is it strong? Where is it weak? Where does it need further development? Read more

Chapter 4
In chapter 4, the authors discuss the Obama administration’s speeches in response to the NSA revelations made public by Edward Snowden and review the involvement of other branches of government in the legal framework described in the administration’s national security speeches. Read more

Chapter 5
In chapter 5, the authors look at the criticisms of the Obama administration’s legal policies on counterterrorism from both the political Right and the political Left—and explain why they largely reject both.  Read more

Benjamin Wittes is a senior fellow in governance studies at the Brookings Institution and codirector of the Harvard Law School–Brookings Project on Law and Security. He is the author of Detention and Denial: The Case for Candor after Guantanamo and the cofounder of the Lawfare blog.