A Boot Camp for Citizenship

Civics education must not be indoctrination, but it also must not be overlooked. By Peter Berkowitz. 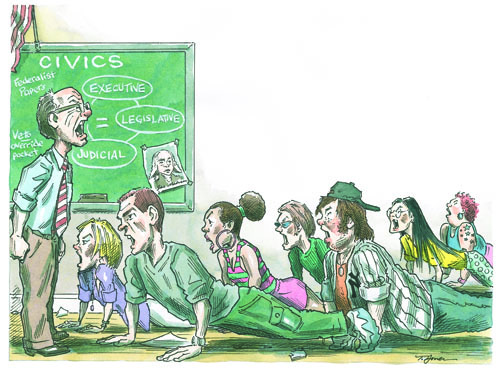 A Boot Camp for Citizenship 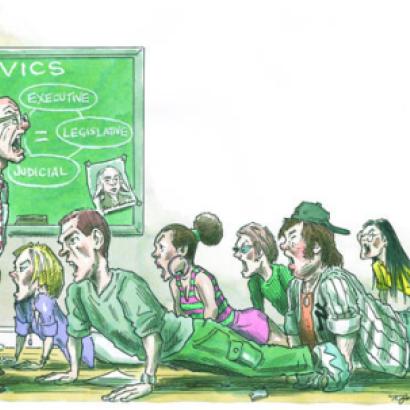 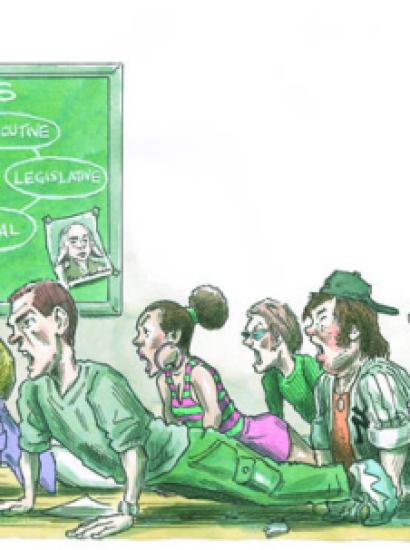 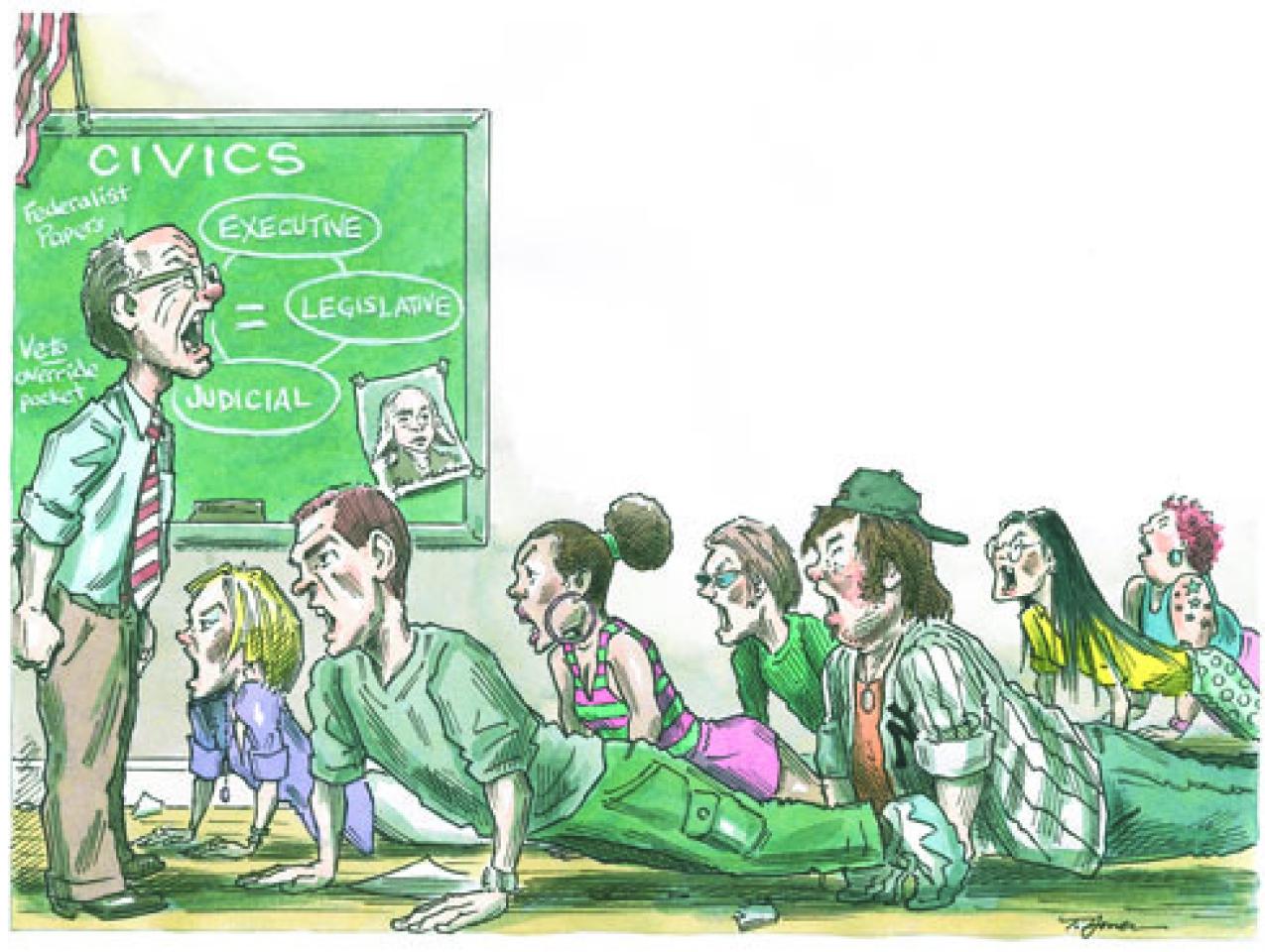 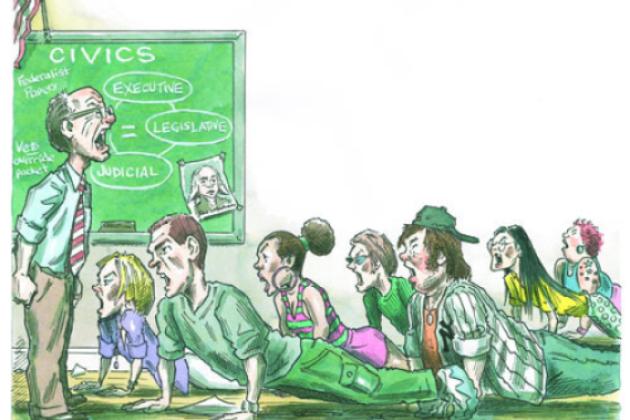 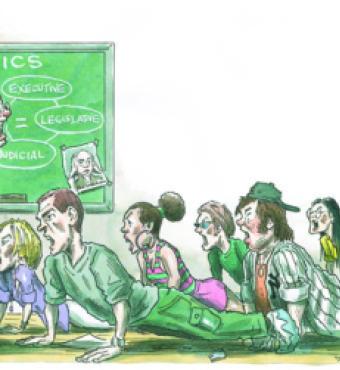 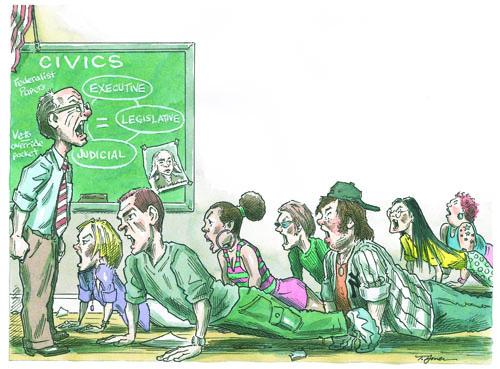 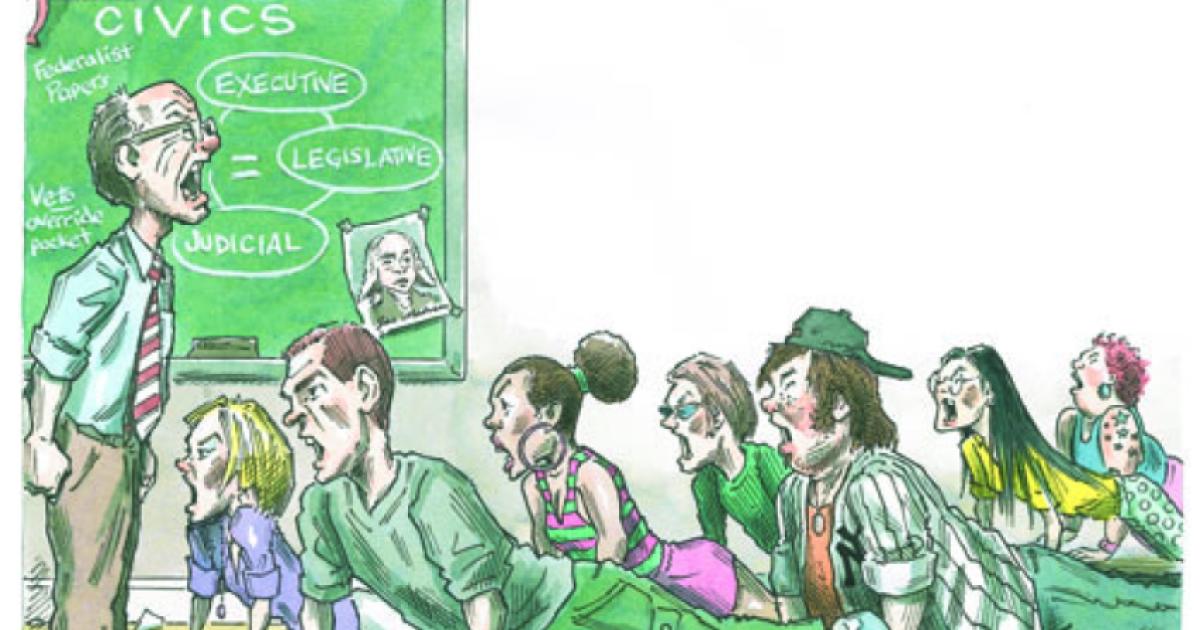 America’s crisis of civic education is acute, requiring a major change in the way students are taught about the workings of American government and the rights and responsibilities of citizenship. So contends David Feith, an opinion editor at the Wall Street Journal, in his introduction to Teaching America, a well-crafted collection of essays from a distinguished and diverse group of authors—progressives and conservatives, policy makers and professors, jurists and political commentators.

The case for civic education—what might have been called “civics” in an earlier generation—is straightforward. Just as, say, doctors who receive defective medical training will be handicapped in the performance of their professional tasks, so too citizens whose civic education is lacking will be less than competent as members of an extended political community. Studying the Constitution—not to mention American political ideas and institutions—can help us all to exercise our rights, respect the rights of others, and weigh the merit of contending policies. More generally, as Feith notes, civic education can nourish a common culture by showing that partisan disputes often reflect conflicting interpretations of a shared commitment to freedom and equality. 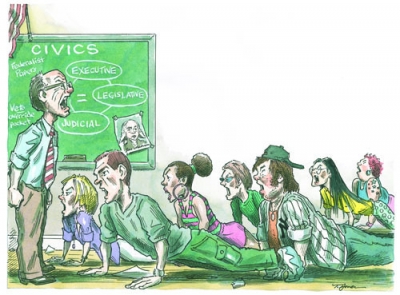 Even as the case for civic education is powerful, the evidence of civic illiteracy is abundant. Mark Bauerlein, a professor at Emory University, reports that out of the thousands of primary and secondary students across the country who in 2006 took a U.S. history exam administered by the Education Department, more than half failed and only slightly more than 10 percent “were as proficient as they should be” for their age and grade level. Bauerlein is particularly concerned that digital gadgetry and video-game distractions are taking students away from a deep and concentrated engagement with facts and ideas.

Bruce Cole, a former chairman of the National Endowment for the Humanities, describes another kind of knowledge deficit. A 2009 survey of roughly a thousand adults conducted by the American Revolution Center (of which he was president) found that 89 percent believed that they had a “passing knowledge of the Revolution and of our founding documents and principles,” but on the rudimentary test that followed, 83 percent failed. Not only is American history taught less and less these days, Cole notes, but “today’s most widely used history textbooks . . . are diluted, dull, and politically correct. They fail to inspire students with a sense of wonder.”

Civics nourishes a common culture. It shows that partisan disputes are just opposite sides of a shared commitment to freedom and equality.

Since civic education is inseparable from basic education, it is alarming to learn from Seth Andrew, the founder of Democracy Prep Public Schools (a charter-school network), that compared with twenty-nine other developed countries, the United States ranks fifteenth in reading, nineteenth in science, and twenty-seventh in math achievement. Correcting such deficiencies will be quite difficult. For the more limited task of cultivating civic knowledge and virtue, Andrew suggests installing a rigorous civics curriculum in high schools and teaching a “civic attitude” as well, by embracing controversy and “leveraging current events.”

For Andrew Rotherham, who heads a nonprofit focused on low-income students, the problems of civic literacy and general literacy are inseparable. The solution, he believes, is a core curriculum that emphasizes “shared history, ideas, and cultural norms.” Especially for low-income students, Rotherham says, “schools are the only place where they might be exposed to such crucial knowledge.”

Universities have contributed significantly to the decline of civic education. For starters, there is the lopsided attention that history departments give to society and culture; the transformation of political science into a discipline devoted to statistics and mathematical modeling; and the rise of schools of education that focus on theories of pedagogy at the expense of academic content. Still, universities will have to play a pivotal role if civic education is to be revived. Admiral Mike Ratliff, president of the Jack Miller Center for Teaching America’s Founding Principles and History, surveys a number of programs—at the University of Virginia, MIT, and the University of Texas, for example—that pointedly teach the American political tradition, often by using a great-books approach.

Though liberal democracies are particularly dependent on civic education, they face a peculiar difficulty in providing it: cultivating an educated citizenry risks prescribing orthodox beliefs and trampling the independence of mind that a liberal education should promote.

To protect civic education from becoming indoctrination, Glenn Harlan Reynolds, a University of Tennessee law professor and master blogger at Instapundit.com, recommends starting with the uncontroversial basics of how government is structured and then ascending to various contested matters—concerning constitutional interpretation, for instance. He stresses the importance of presenting without ridicule—and in their own terms—both conservative and progressive views and of relying on original documents, as much as possible, rather than summaries and commentaries.

Michael Kazin, a professor of history at Georgetown University, pursues a related theme by faulting history books that are too tendentious to be helpful to students. He cites in particular Woodrow Wilson’s A History of the American People (1902) and, more recently, Howard Zinn’s A People’s History of the United States, whose “romantic simplicity is a form of civic miseducation.” A reliable work of history, Kazin says, should balance evidence and argument, make history come alive for readers, and show empathy for the actors in history’s unfolding drama.

Surely there is no reason why well-educated teachers can’t deliver a civic education that highlights the remarkable achievements of America’s liberal democracy while also forthrightly acknowledging its many flaws. At the moment, those flaws include the failure to cultivate an understanding of American liberal democracy itself.