Looking at domestic migration into and out of California today versus three decades ago explains much about California’s looming obstacles and forestalls state policy dominated by a single-party for way too long.

Looking at domestic migration into and out of California today versus three decades ago explains much about California’s looming obstacles and forestalls state policy dominated by a single-party for way too long.

For years, those on the right have been clamoring over each other to proclaim California’s wealthiest stampeding for the nearest exit; meanwhile, Democrats (particularly those running the state) have decried such rhetoric as fear-mongering.

However, examining the domestic migration data illuminates the “seeking greener pastures” story. While the results are likely to confound progressive and conservative activists alike, one thing is certain: the issue is real.  California residents are on the move – out of, not into the Golden State.  Since 1992, California has witnessed a negative domestic migration rate every year except two (1999 and 2000) with top the recipient states being Nevada, Arizona, Oregon, Texas, and Washington.

Complicating matters: a quality replacement phenomenon, with lost jobs being replaced by lower-paying ones.  Los Angeles County, for example, has lost a net of 28,627 jobs between 1990 and 2011 according to UCLA researchers. Among the 100,749 jobs leaving the county, the average salary was $76,000 (about $20,000 over Los Angeles County’s household median income), while the average salary for the 72,122 jobs moving to the county was roughly $52,000—a decline of almost 32% and $4,000 below the county’s household median income.

Using the Current Population Survey (CPS) from the Census Bureau, I calculated a rough approximation of who is entering and leaving California between 2004 and 2012 (the period of time when all data variables were consistent and hence, comparable). From this examination, we can better understand what California needs to do to change the tide and re-shine its golden hew.

During that eight-year stretch, California had a net domestic out-migration of about 720,611 people (roughly the population of Detroit), which constituted about 2% of the state’s average population over the period.  While this might appear trivial, the type of people leaving California compared to those entering suggests the underlying appeal of California might be losing its luster. 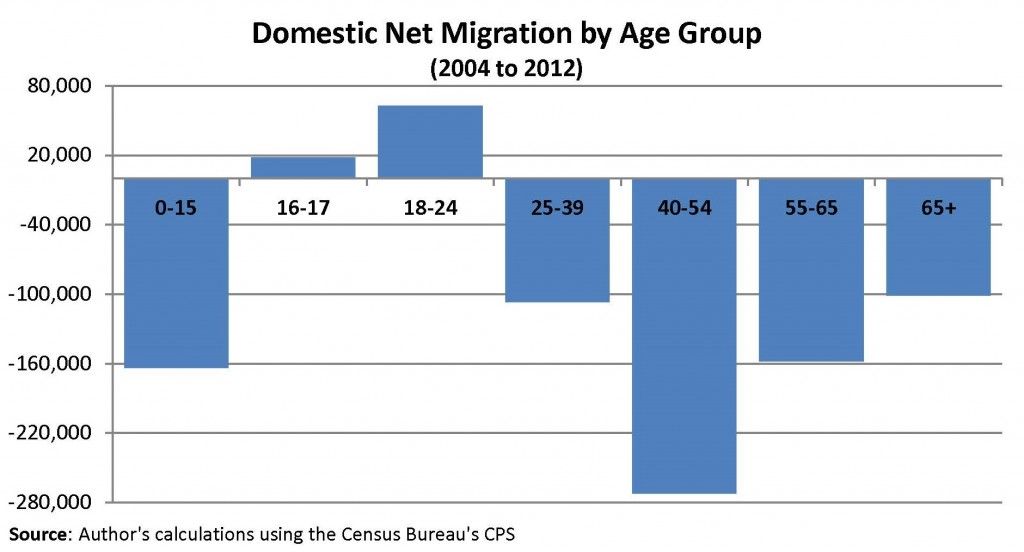 Looking at age, we see the red flag: individuals are coming to California in their early 20’s and not sticking around. We find that only college-age individuals see a net in-migration into California; all other groups witness a net out-migration, with the 40-to-54 age group — those in the prime of their professional careers — having the highest level of net out-migration.  Despite college age individuals experiencing a net in-migration, the drop-off in the 25-to-39 age group suggests that these individuals are not staying within the state, likely due to the high cost of living in California and/or the lack of employment.

Also revealing is the 15-and-below group.  Since we don’t see a lot of pre-high schoolers packing up their bags and hitch-hiking to Las Vegas or Phoenix, the net out-migration from this group represents families exiting the state.  It’s apparent California’s university system is still a significant draw, but the state isn’t doing well with families, retirees, or those in their prime working age or just starting their careers. 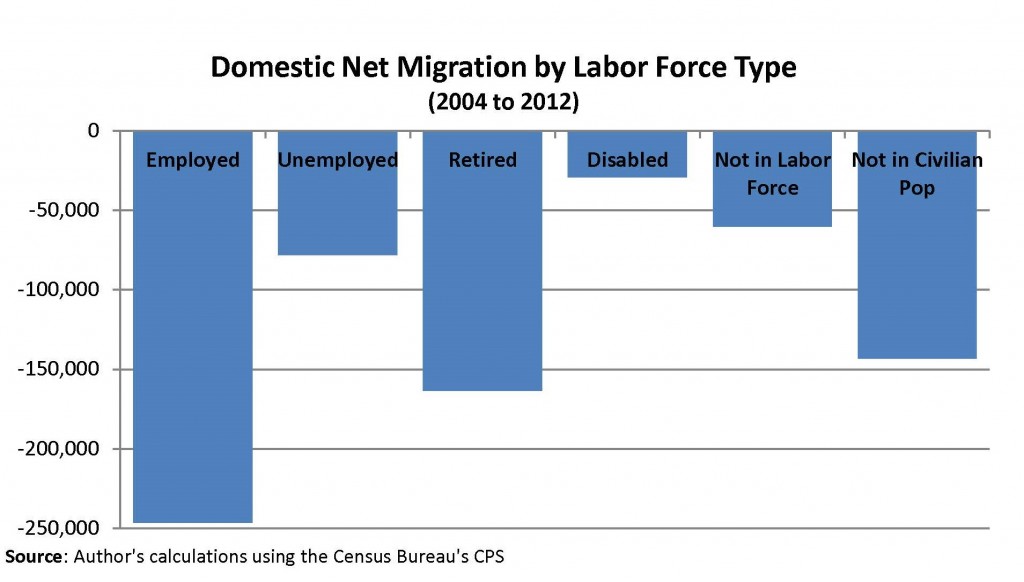 Republicans claim that California is pushing out the employed and becoming a magnet for the needy.  In some manner, the data affirm this.  While all categories across the labor force spectrum saw net out-migration, the two largest categories were “employed” individuals and “retired” individuals.  The number of net out-migrating “unemployed” and “disabled” are just 32% and 12%, respectively, of the “employed” total. On a whole, California is losing more individuals who are employed than gaining and losing them at a faster rate than those who are not working (for one reason or another).

However, it’s worth noting that unemployed individuals, who are by the definition of unemployment still looking for work, are not leaving more.  Despite a lagging economy relative to the national average, these individuals who are still looking for work have decided to stick it out in California. This could be a result of the California’s highly generous unemployment insurance program (which, by the way, is in debt to the federal government to the tune of $8.1 billion) or more generally, the generous nature of California’s welfare state. 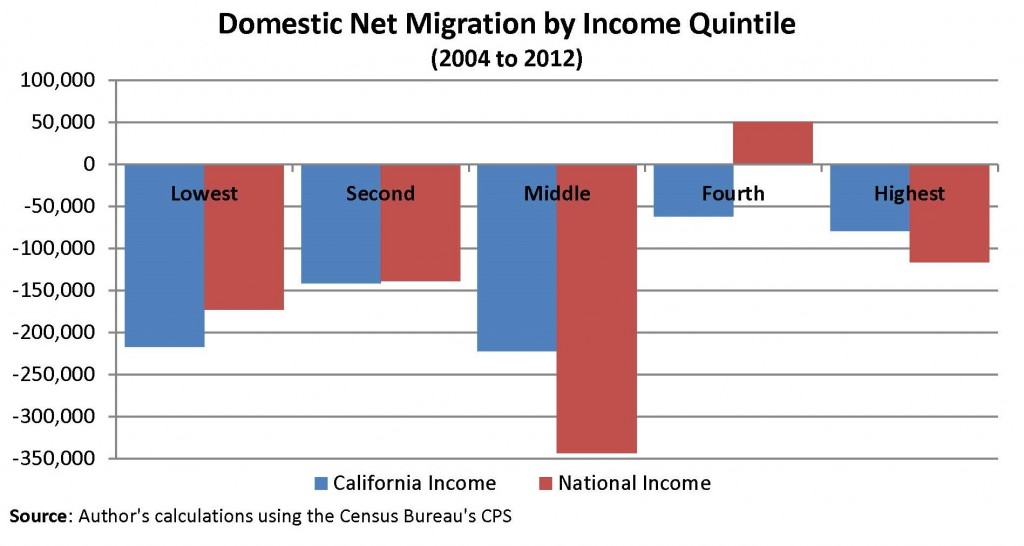 Here, we come to a doozy for those on the right.

While economic theory definitely backs up their “wealth exodus” theory, the data show another group leading the caravan east/north. Presented here are the income quintiles based on both national household income levels as well as California household income levels.  Except in one case, we see a very similar picture under both measures.

Yes, California is losing more of the wealthiest individuals than it’s gaining. But those aren’t the individuals driving California’s net out-migration rates.  Depending on the measure, the highest income quintile individuals only represent between 11% and 22% of those migrating out of the state.

All three of these demographic representations lead us in one direction: public policy impacts migration.

California’s overall average high prices are easily explained by the supply and demand curves.  Between the burdensome California Environment Quality Act, the business-hostile California Coastal Commission, and a bevy of other development rules and regulations, California’s restrictive housing policy has diminished supply, while demand has continued to rise.

Home prices in California are not constant; based on analysis from Zillow, the average home in the San Francisco metro area costs just over $608,000 as of June 2013 but only $224,000 in the Riverside metro area. Therefore, for affordable housing, Californians have to look inland.  Hence, the comparison for California isn’t Santa Monica vs. Las Vegas, Phoenix, Portland, Houston, or Spokane; it’s Bakersfield, Fresno, or Riverside vs. the out-of-state cities.

It’s at this point that California’s other policy short-comings – such as its highly progressive tax code, its deteriorating roads and school infrastructure, plus its prohibitively high electricity and energy prices – start to repel the very people California used to attract: able-bodied-employed-middle-class families looking for a piece of the California Dream.  In the words of Billy Joel, “Good luck movin’ up, ‘cause I’m moving out.”

Individuals always make trade-offs when deciding to move into or out of a state.  Despite California’s misgivings, the state could always fall back on three areas: its first-class higher-education system, its overall quality of life, and its high-quality workforce.  However, based on the most recent CNBC annual “America’s Top State for Business” index, California is falling behind in those areas – dropping 11 spots (#23 to #34) in the “workforce” category, 10 spots (#33 to #43) in the “education”, and 7 spots (#20 to #27) in the “quality of life”.

Pro-growth, pro-equality of opportunity policies can change this, but first, Sacramento must stop denying there is a problem.