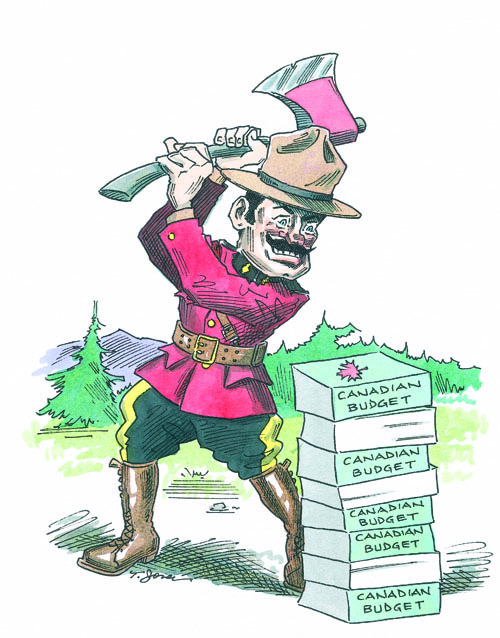 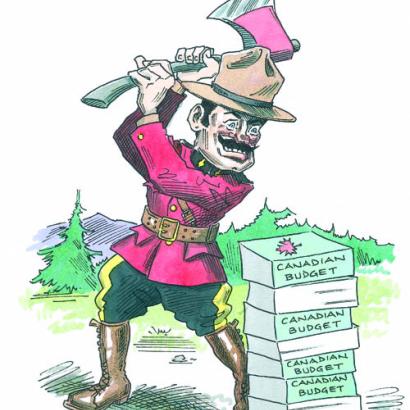 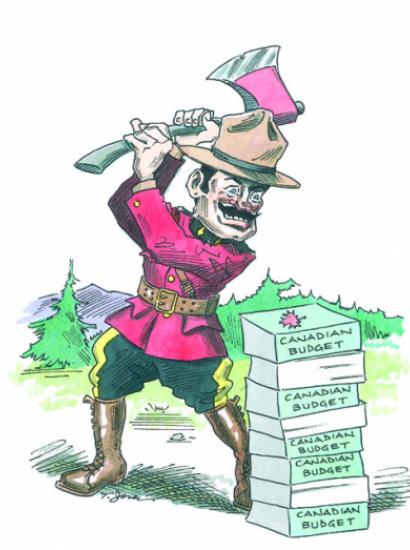 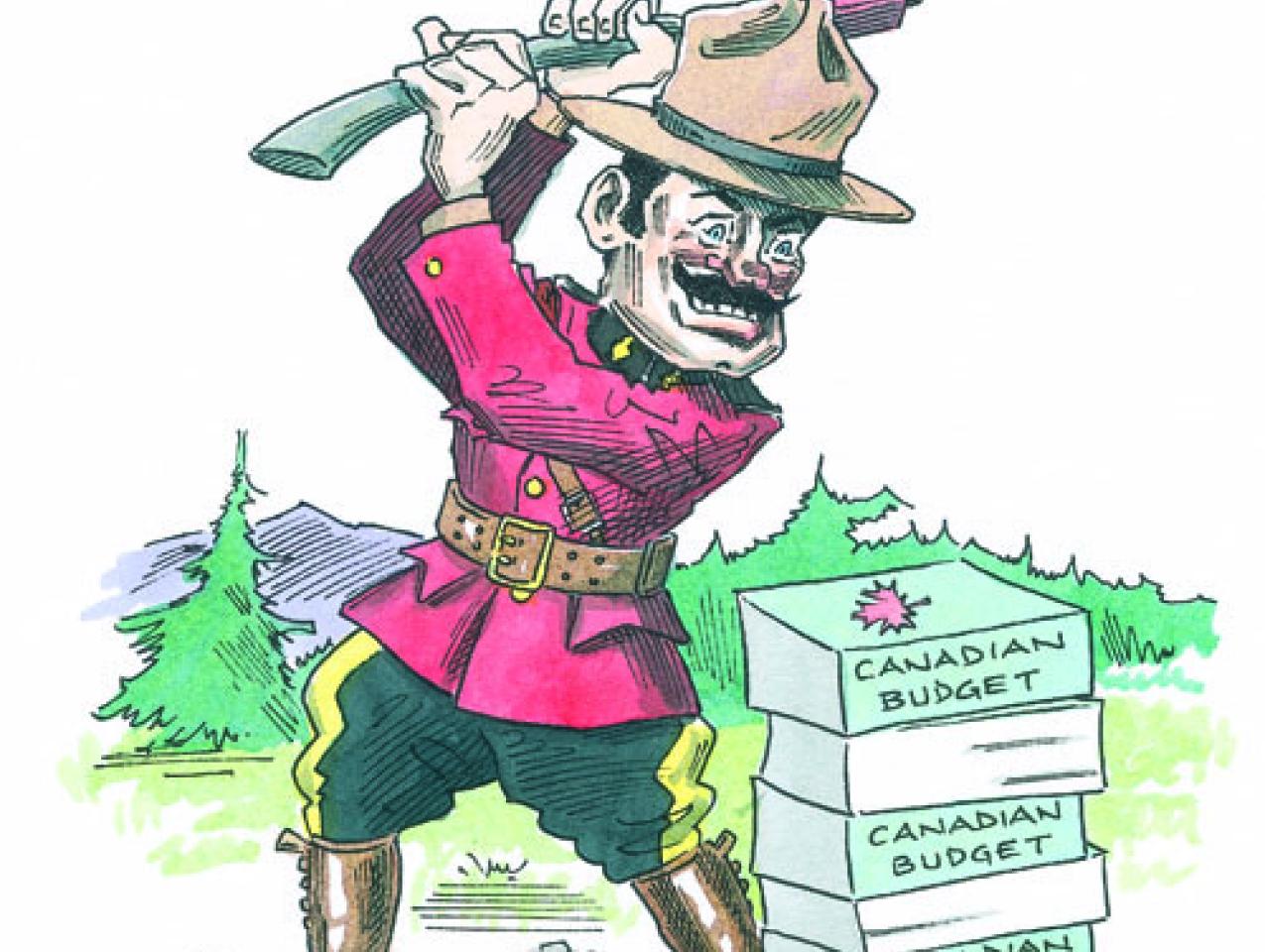 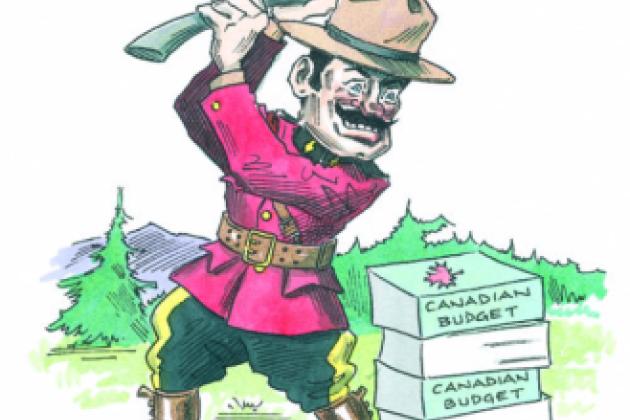 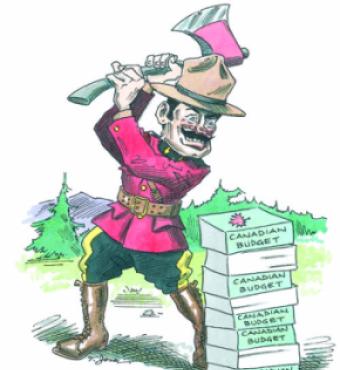 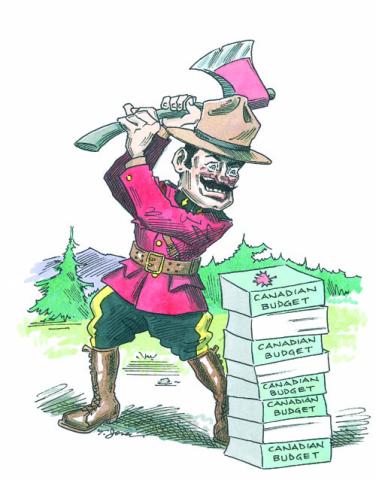 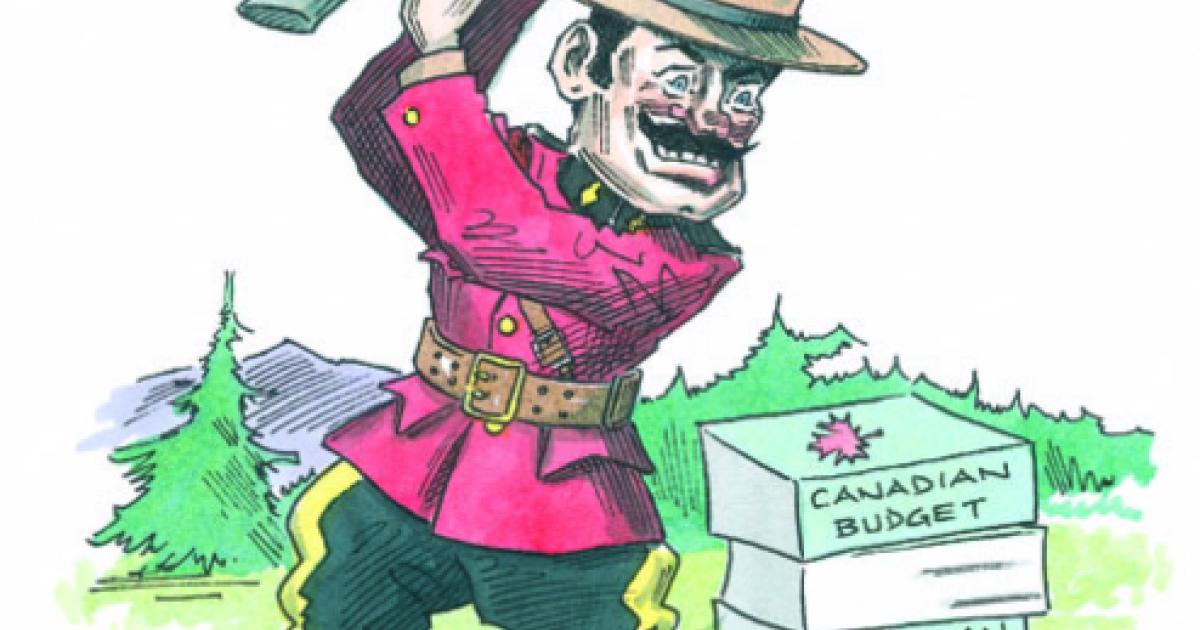 Imagine this scenario: a federal government runs a large deficit. The deficits are so large, in fact, that the ratio of federal debt to gross domestic product approaches 70 percent. Meanwhile, voters have gotten used to large federal spending programs. Does that sound like the United States?

Well, yes. But it also describes Canada in 1993. Yet, just sixteen years later, Canada’s federal debt has fallen from almost 70 percent to only 29 percent of GDP. Moreover, every year between 1997 and 2008, Canada’s federal government had a budget surplus. In one fiscal year, 2000–2001, its surplus was a whopping 1.8 percent of GDP. If the U.S. government had such a surplus today, that would amount to a cool $263 billion rather than the current deficit of over $1.5 trillion.

How did the Canadian government manage such a turnaround? Since Canada is, to an extent, a more socialist and more highly taxed country than the United States, you might expect its government to have relied on tax increases—but it didn’t. About 85 cents of every dollar of deficit reduction was achieved with spending cuts. Beyond that, the government didn’t pull every politician’s favorite trick of cutting just the growth rate of government spending. It cut absolute spending on many programs. And because the inflation rate, though low, was greater than zero, these cuts in dollar terms were even larger in inflation-adjusted dollars.

Because of the years of spending cuts, federal spending on programs—that is, all spending except for interest on the federal debt—fell from a high of 17.5 percent of GDP in 1992–93 to 11.3 percent in 2000–2001. Prominent Canadian economist Thomas Courchene noted that this was the lowest percent in more than half a century.

There are two morals to this story for the United States.

First, the deficit can be tamed with ten years of fiscal discipline, mainly on the side of spending cuts. The United States does not have to accept the idea that there are only two grim choices: living with huge deficits and a federal debt that is getting ever greater as a percent of GDP, or accepting our current spending but reducing the deficit with major tax increases.

SOME “PAIN,” PLENTY OF GAIN

We often hear that cutting government budgets causes “pain.” Whether and to what extent that’s true, though, depends on what is cut. By selling off its air-traffic-control system to a private non-profit called NAV Canada, the Canadian government netted $1.4 billion and saved $200 million in annual subsidies. A big benefit beyond these savings is that NAV Canada has revolutionized air traffic control in Canada, putting the country decades ahead of the United States in air traffic control.

About 85 cents of every dollar of deficit reduction was achieved with spending cuts.

Another area where the government cut spending was unemployment insurance. At its most profligate, Canada’s program had paid unemployed people in high-unemployment regions up to forty-two weeks of benefits if they had worked as little as eight weeks. In areas of Canada with seasonal industries such as fishing and logging, people would often work for a few months in the summer and then collect unemployment benefits the rest of the year. One of the Canadian government’s first budget reforms was to raise the minimum amount of time worked to be eligible for these benefits. The new minimum was twelve weeks in high-unemployment regions and twenty weeks in low-unemployment regions. Did this cause pain to people who had to work a little longer? It must have, but reining in such a profligate program that subsidizes idleness is an idea that made sense.

Who were the politicians who implemented these budget cuts and held to them for over a decade? Paradoxically, they were from the big-government, welfare-state-oriented Liberal Party that had dominated Canadian federal politics for fifty-two of the seventy-two years between 1921 and 1993. The two most responsible for Canada’s success in cutting budgets were Prime Minister Jean Chrétien and Minister of Finance Paul Martin. Interestingly, Chrétien had been an ally of Pierre Trudeau, the Liberal Party prime minister who, more than any other person, had been responsible for expanding government in Canada. Martin, the minister of finance from 1993 to 2004 and then prime minister from 2004 to 2006, was the son of Paul Martin Sr., who was often called “the father of Medicare.” (Medicare is the name of Canada’s “single-payer” health care system.)

Early in his time as finance minister, Paul Martin became a strong believer in reining in government spending. He vowed to reduce the deficit “come hell or high water.” Hell or High Water became the title of the memoirs he later wrote. Martin was determined to turn deficits into surpluses and to keep the surpluses. Early on, two outside pressures helped him in this effort. One was an editorial in the Wall Street Journal that referred to Canada’s dollar as “the peso of the north.” The other was that two weeks before Martin’s fiscal year 1996 budget was introduced, Moody’s Investor Service had put the Canadian government on a “credit watch” because of the government’s high debt-to-GDP ratio.

It also helped that the Reform Party, a surging party with its basis in western Canada, and two private groups, the Canadian Taxpayers Federation and the National Citizens’ Coalition, were pushing for even bigger spending cuts.

Many people, including many economists, think that when government cuts spending substantially, the result at least in the short term is an increase in unemployment. But Canada’s experience, like the U.S. experience after World War II, does not bear this out. As government spending as a percentage of GDP fell in Canada through the second half of the 1990s, the unemployment rate fell too. 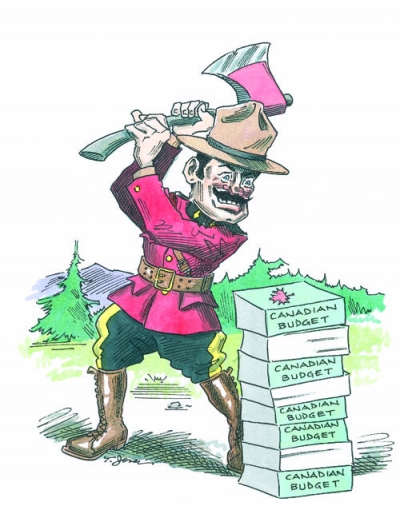 Also, the Canadian economy experienced a high rate of growth in real GDP. As the government cut its spending on programs from 14.9 percent of GDP in fiscal year 1996 to 12.1 percent in fiscal year 2000, more resources were available for people to use productively in the private sector. From 1997 to 2000, when government spending as a percent of GDP fell, Canada’s economy experienced a high rate of real growth of between 4 percent and 5 percent a year.

THE ROAD BACK TO SURPLUSES

The payoff for such budget cutting was a string of budget surpluses. In 2000, the government started a series of tax cuts. Chrétien and Martin restored full indexing of tax brackets for the individual income tax so that inflation alone could no longer put people in higher brackets. With an eye on global competition for capital, they cut the flat corporate income tax rate, in stages, from 28 percent to 21 percent by January 1, 2004, and excluded 50 percent of capital gains from taxation, up from only 25 percent.

The Canadian experience shows that cutting spending even during lowgrowth years is good for long-term results.

Also concerned about competition for highly productive labor, Martin and Chrétien eliminated the 5 percent surtax on high-income individuals and added a 26 percent bracket for the people in the lower-income portion of what had previously been the 29 percent bracket. Since then, the corporate income tax rate has been cut, in stages, to 16.5 percent, and Prime Minister Stephen Harper, recently re-elected with a Conservative Party majority, plans to cut the corporate tax rate to 15 percent in 2012. Canada’s government is saying, in effect, “Give me your highly taxed owners of capital yearning to breathe free, I lift my lamp beside Calgary and Toronto.”

Chrétien and Martin had the advantage of working in a parliamentary system in which the executive and legislative branches are one. A determined prime minister with a majority of parliamentary seats can pretty much get his way. Cutting spending in the United States, with its legislative powers divided between the Congress and the president, is more difficult—but not impossible. Indeed, between 1990 and 2000, U.S. federal spending fell from 21.8 percent to 18.4 percent of GDP, a drop of 3.4 percentage points. This was due to declining interest on the debt, restraint by a Republican Congress on domestic spending, and post–Cold War cuts in defense spending.

Who were the politicians who launched these budget cuts and held to them for over a decade? Paradoxically, they were from the biggovernment, welfare-state-oriented Liberal Party.

Similar opportunities present themselves today. Government spending on war has ballooned, and ending the wars in Afghanistan and Iraq would save about $150 billion annually, or 1 percent of GDP. Another way to cut spending substantially would be to abolish or substantially cut the size of the departments of Energy, Education, and Labor. And what about abolishing the Transportation Security Administration, which has done so much to harass those who travel by commercial air and violate their Fourth Amendment rights? Cutting that agency would not only save money but reduce pain.

U.S. government spending, if not restrained and not ratified with tax increases, will ultimately cause the government debt owed to the public to exceed the whole U.S. GDP. It is not too late to turn this situation around, but immediate action is necessary.