A Chevron Revolution In The Supreme Court?

A new book proposes a rollback of the administrative state. 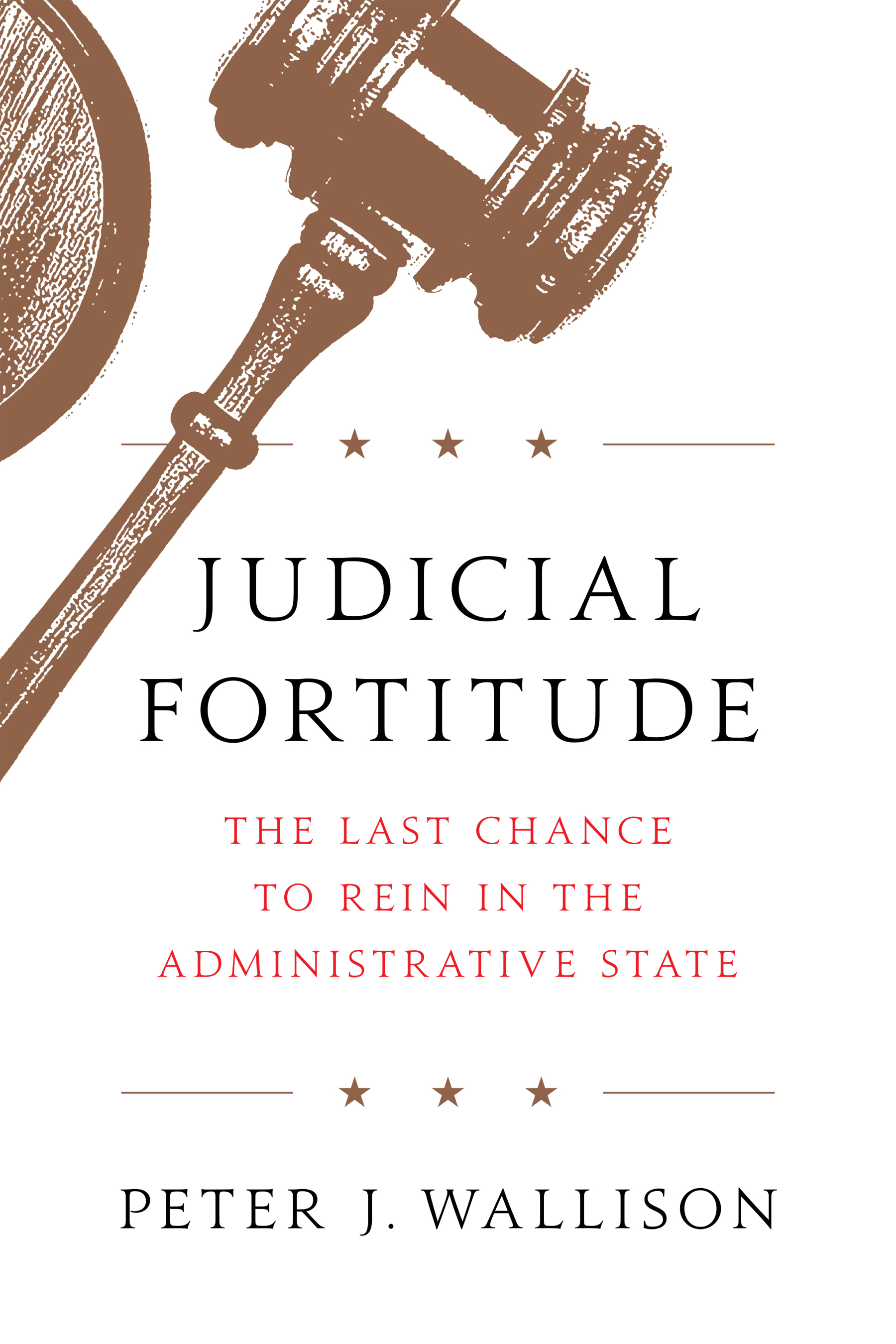 A Chevron Revolution In The Supreme Court? 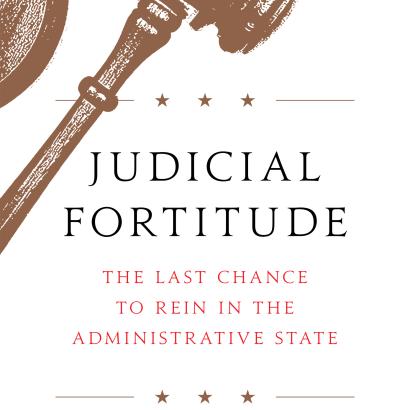 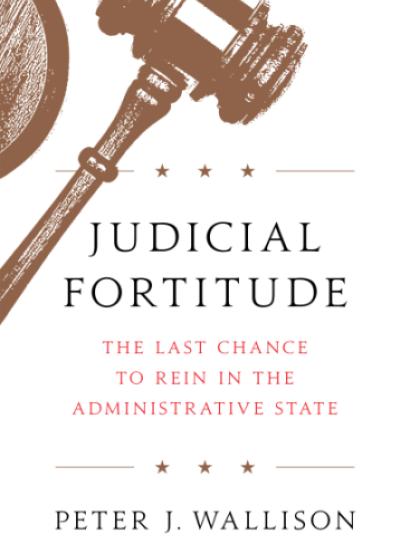 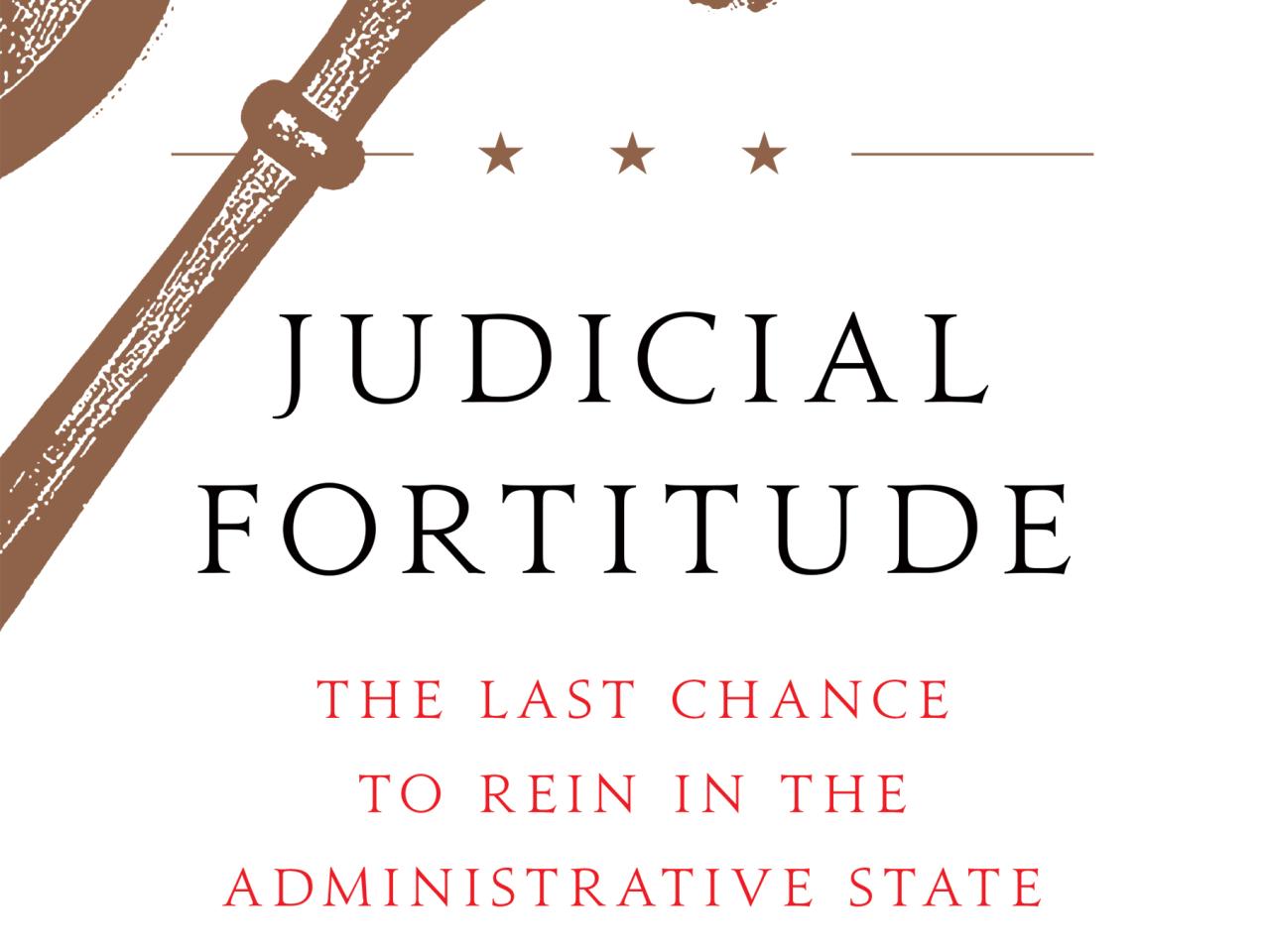 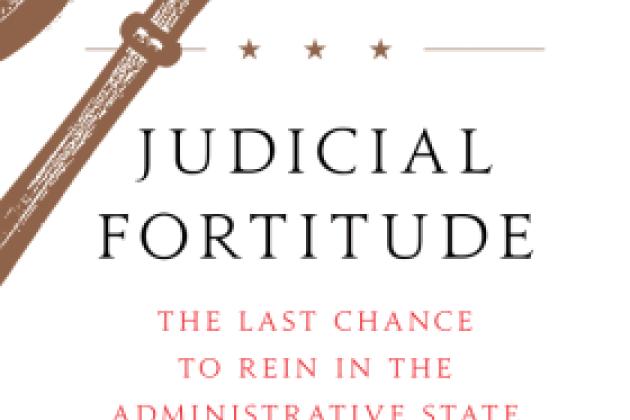 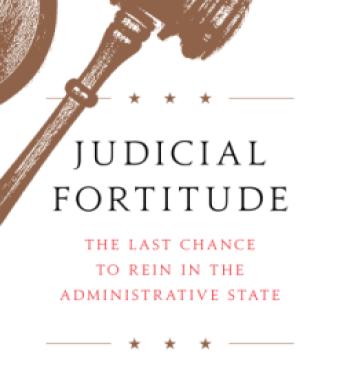 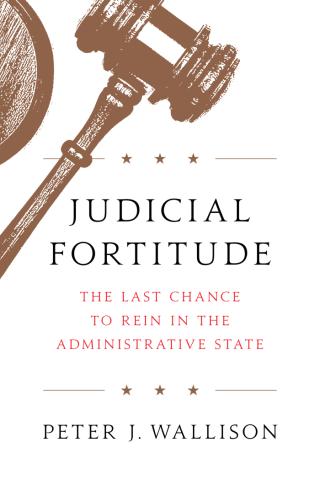 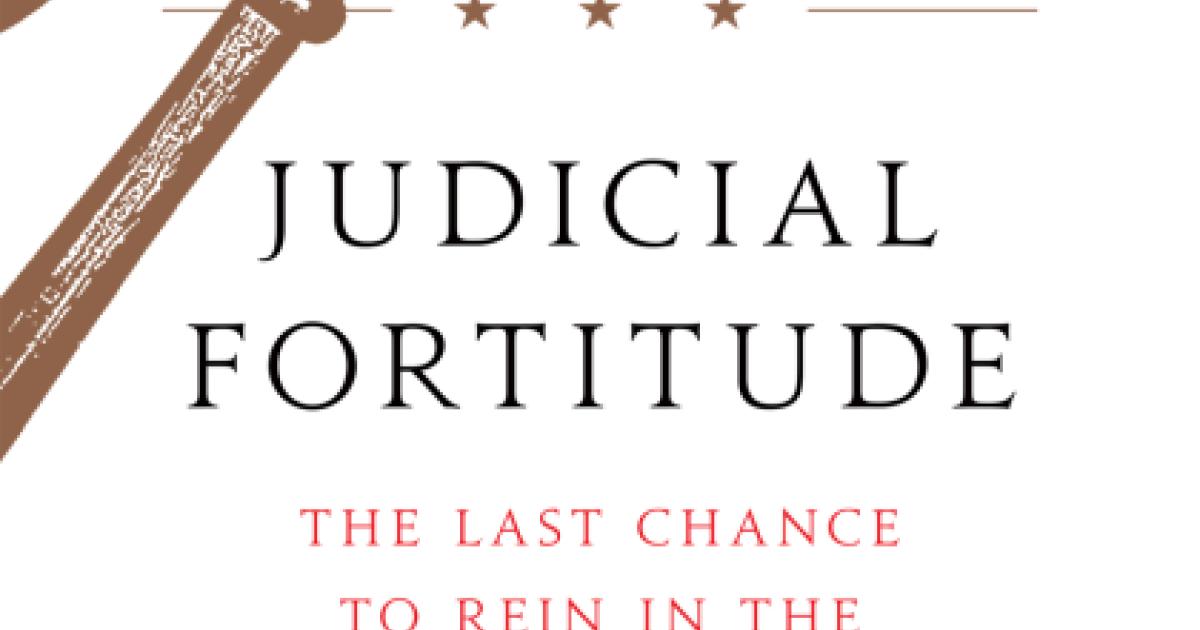 The appointments of two conservative justices to the Supreme Court this year has led to speculation—perhaps even an expectation--that the Court will now undertake a conservative revolution.   Most of this discussion has revolved around a turning back of the dramatic social change brought about by the Court with its legal protection of abortion and same-sex marriage.  Yet a social counter-revolution of this kind would be surprising, since respecting judicial precedent has long been a principle of conservative judges.  Instead, one could more readily envision a slowdown of social change from the Court, or even some limitations on existing social rights, than a full-scale revolution.

Peter Wallison’s new book, Judicial Fortitude:  The Last Chance To Rein In The Administrative State (Encounter Books, 2018), rightly contemplates a more likely path for a conservative Supreme Court:  slowing, stopping, or even rolling back the dramatic growth of the administrative state.  As Wallison points out, since the Supreme Court has contributed to the rise of the administrative state, it could at least do its part to curtail it.  In fact, Wallison is optimistic that the Court, exercising powers that it has not used in decades, could do even more than that.

Wallison’s book is timely, given the growing awareness of the problems associated with the administrative state.  Two recent books—Jason Chaffetz’s The Deep State and Michael Lewis’ The Fifth Risk—document the powerful influence of bureaucrats.  President Trump’s campaign promise to roll back two federal regulations for every new one adopted has begun to play out, especially in the environmental field.  Congress passed a bill cutting back some of the regulatory oversight of the Dodd-Frank bill, especially as it pertains to smaller banks.  The Senate has before it the Reins Act, which would take hold of runaway administrative agencies by requiring that Congress approve any major new regulations from the Executive branch.

Wallison’s title, Judicial Fortitude, points to a different approach to reining in the administrative state: relying on the Supreme Court.  Indeed, the subtitle of the book suggests the sense of desperation that he and other conservatives feel about their project:  “The Last Chance To Rein In the Administrative State.”  Given the difficulty of actually carrying out the agenda Wallison proposes, his “last chance” is only slightly more hopeful than Charles Murray’s conclusion (in By the People:  Rebuilding Liberty Without Permission) that by now there is no chance to roll back the regulatory state, with Murray calling upon the people to engage in “systematic civil disobedience” of intrusive regulations.

The case for the Supreme Court to act goes back to its constitutional role of limiting the excesses of the executive and legislative branches when they overstep their constitutional authority.  Under the separation of powers of the Constitution, Congress may not delegate its legislative powers to the president or to an administrative agency, and administrative agencies may not exceed the power delegated to them by Congress.  Wallison and other conservatives agree that such violations of the separation of power doctrine are rampant, and that there has been little or no effective check to stop or prevent them.  The author provides plenty of current examples from the Environmental Protection Agency, the Department of Education’s Office of Civil Rights, and elsewhere.

The difficult questions are whether and how the Supreme Court could step in now to stop the juggernaut of the administrative state that began its dramatic rise in the Progressive Era and, especially, the New Deal?  Wallison proposes two ways—one plausible and the other a stretch—by which the Court could accomplish this.  One is to undo the so-called Chevron doctrine, adopted by the Court in a 1984 case.  Under Chevron, courts should defer to an administrative agency’s interpretation of its own statutory authority if its interpretation is deemed “reasonable.”  As Wallison states, “Chevron, in effect, gave administrative agencies the authority to determine the scope of their authority.” Late in his career, Justice Scalia had begun to express doubts about Chevron and one could see a conservative Court issuing a corrective, if not an outright reversal.   This plausible remedy might at least slow the administrative train, but it would hardly stop it.

The larger and more difficult judicial remedy Wallison proposes is for the Court to resurrect the “nondelegation” doctrine.  Congress may not delegate its legislative powers to agencies or the executive branch.  0ne of the most important books about the power of the administrative state, Constitutional Morality and the Rise of Quasi-Law by Bruce P. Frohnen and George W. Carey (2016), points out that this kind of delegation is now the new normal for Congress.  In complex areas of oversight, Congress passes laws expressing little more than an intention to regulate, leaving the detailed work to government agencies. As always, the devil is in the details.  This almost certainly is, in a classic constitutional understanding, an improper delegation of legislative power by Congress.  But Congress passes the laws, the president signs them, and the agencies happily draft regulations.  No one seems to want to stop it, at least no one in power.

The problem, as Wallison acknowledges, is that the nondelegation doctrine is all but dead at the Supreme Court, and one has to wonder if it could be revived after so long and in the face of such acceptance of Congress’s willing delegation to agencies.  Wallison rightly argues that this doctrine “protects and preserves the role of Congress as a legislature to make the most important decisions for society.”  But he goes on to admit that the Supreme Court has not invoked it since 1935 and “in the 230 years since the ratification of the Constitution, the courts have made little progress in developing a jurisprudence of nondelegation.” Yes, the Supreme Court initially used this doctrine to declare unconstitutional some of Franklin Roosevelt’s New Deal legislation in the first hundred days but, as Wallison writes, Roosevelt’s later appointments to the Supreme Court began to turn that around and by now we live in a different judicial world.

Would I love to see the Supreme Court take this kind of stand against Congressional delegation and agency regulation?  Absolutely.  Do I think it could happen?  No, not really.  Wallison does better at diagnosing the problem than arguing for this as a likely solution.  Moreover, it feels a bit like conservatives would be heading down the road liberals have often traveled:  If we do not like what other branches of government are doing, let’s take it to the Supreme Court.  I readily acknowledge, however, that liberals have often done this to advance a social agenda under broadened interpretations of the “equal protection” and “due process” clauses of the 14th Amendment, what we sometimes call “substantive due process,” whereas this would be defending constitutional processes.  It is at least a form of judicial activism for the right reasons, using the Court as a brake and not an engine.

I rather think slowing the administrative state is a multi-year, all-hands-on deck project, not an assignment for the Supreme Court.  Admittedly, I am a member of the “Make Congress Great Again” camp.  A large part of the problem is not just that presidents have taken greater executive power and the courts have not stopped the grab, but rather that Congress seems so willing to give up its power.  We see it, especially, in war powers, where Congress actually has the leading constitutional role but instead defers to the president.  As one Congressman said when Congress could have taken up the question of military attacks in Syria a few years ago, but instead adjourned and went home early, a lot of people around here would like the president to “just bomb the place and tell us about it later.”  We see it in presidential declarations of wars on poverty, crime, drugs, terror and the like, where the executive takes over domestic policy from Congress.  Or in the 28 states of national emergency under which we now live that again expand executive power at the expense of Congress.  If Congress does not draw a line and exercise greater courage and activity, no Supreme Court decision will save us from the administrative state.

Party loyalty is also a problem the Supreme Court will not solve.  Members of Congress are now more loyal to their party and its priorities than to their own constituents or to the institutions of Congress themselves.  Congress passed Obamacare on a party-line vote of Democrats and tax reform on a party-line vote of Republicans.  The administrative state continues to grow in new areas that Washington attempts to take over—education through No Child Left Behind, health care through Obamacare—not just in the extent of regulations on a particular issue.

One challenge of being a conservative today is that of being a conservative not only in ends but also in means.  Calling on the Supreme Court to fix problems created by all the branches fails to recognize the Founders’ belief that the judiciary would be the weakest of the branches.  I readily agree, however, that the courts must do their part and, at least in rolling back the Chevron doctrine, Wallison’s book points the way.

David Davenport is a research fellow specializing in international law and treaties, constitutional federalism, and American politics and law. He is the former president of Pepperdine University (1985–2000).