The Fight for Human Rights: Lessons From Afghanistan

In this episode of Battlegrounds, H.R. McMaster and Nader Nadery discuss human rights law, the dire situation in Afghanistan, and what more might be done to foster peace and protect innocents. 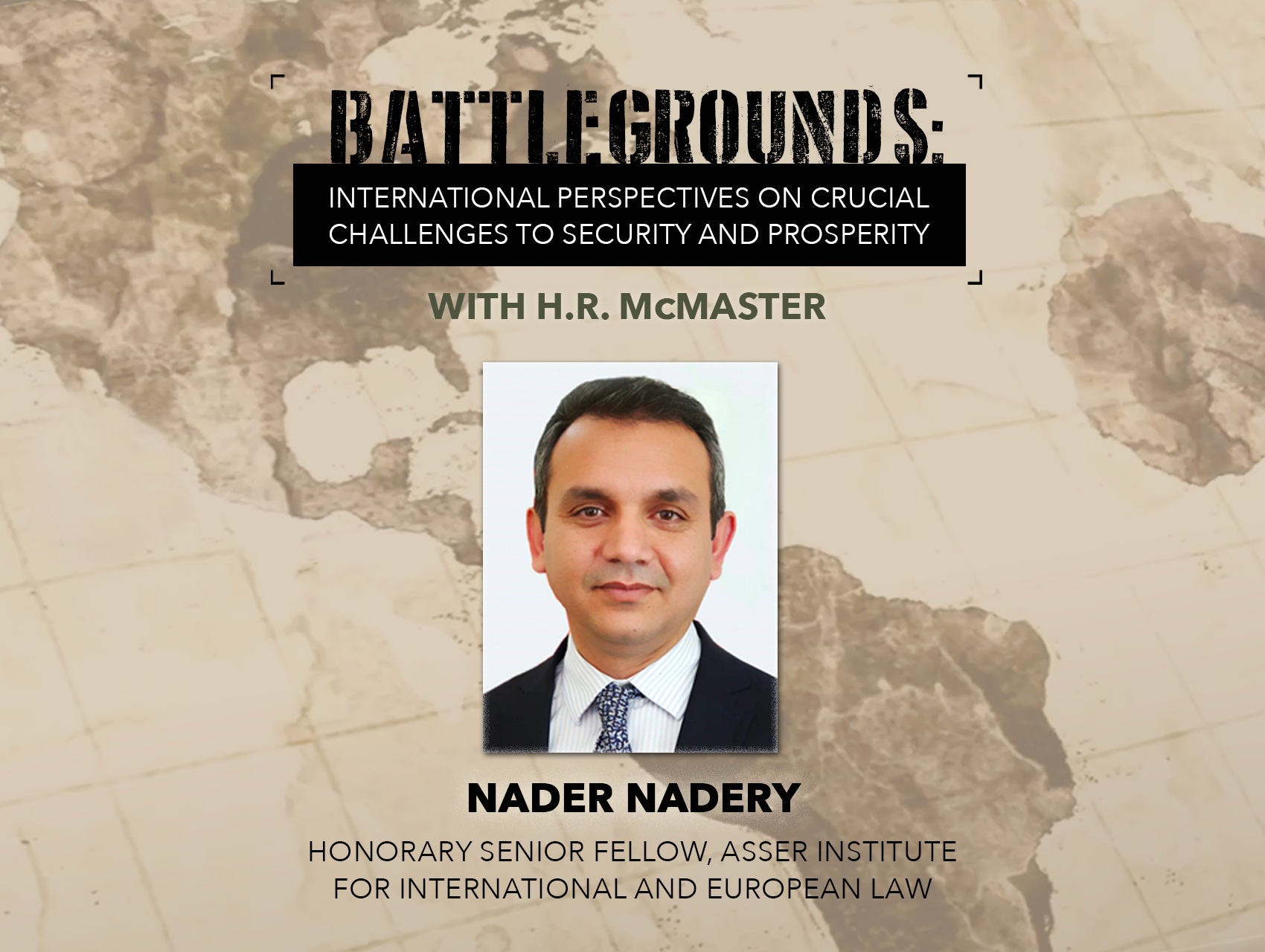 The Fight for Human Rights: Lessons From Afghanistan 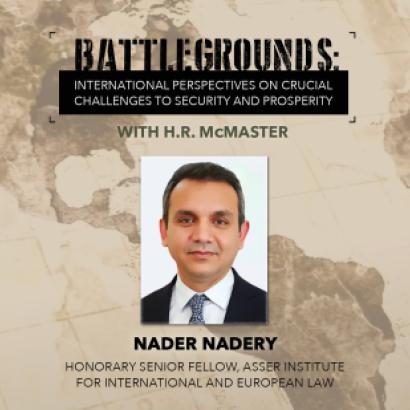 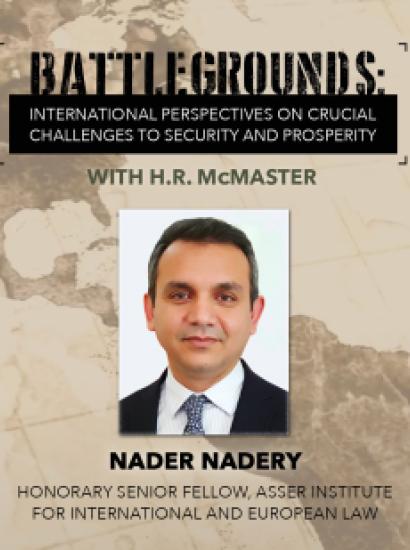 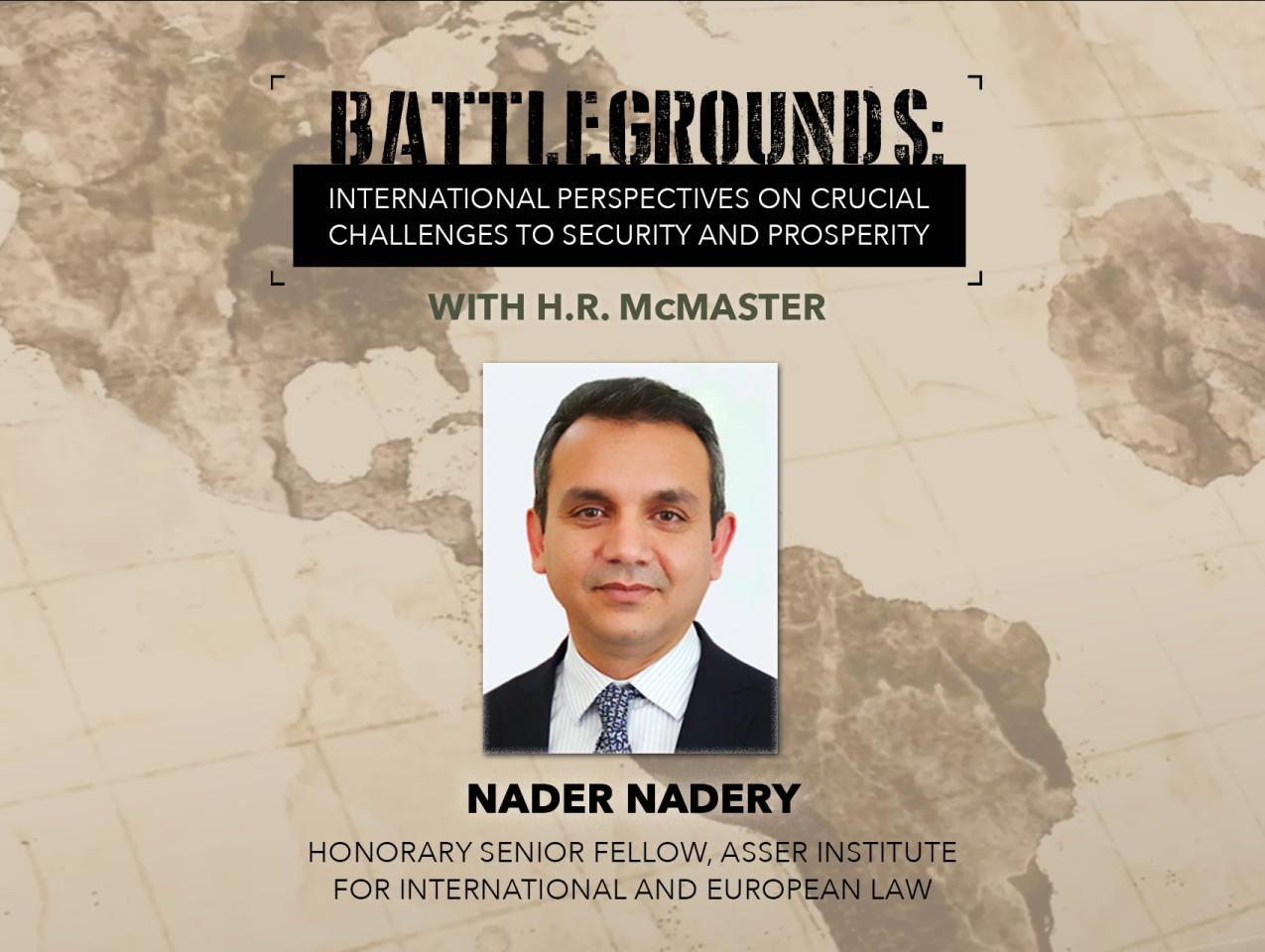 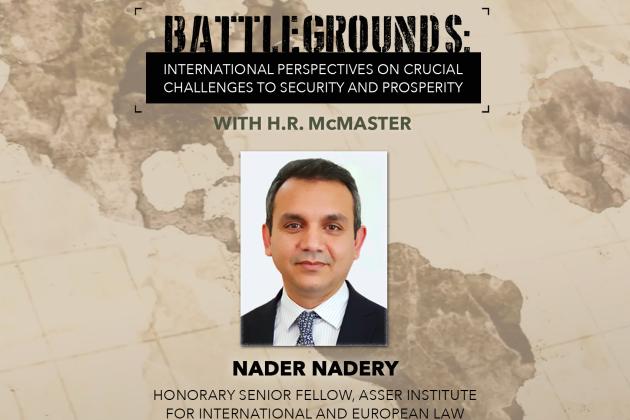 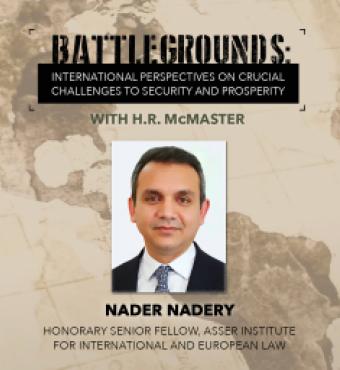 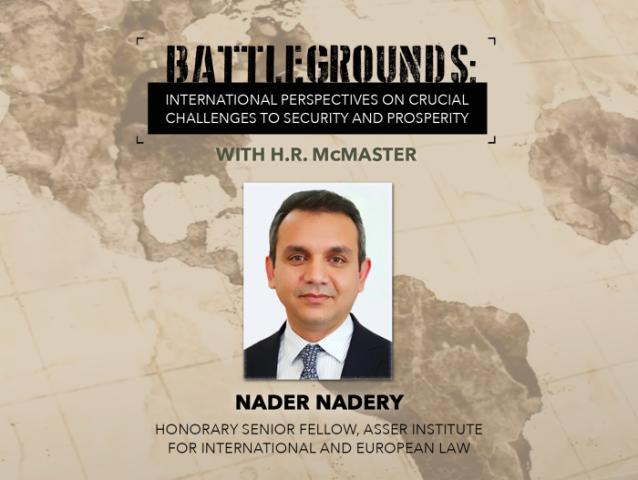 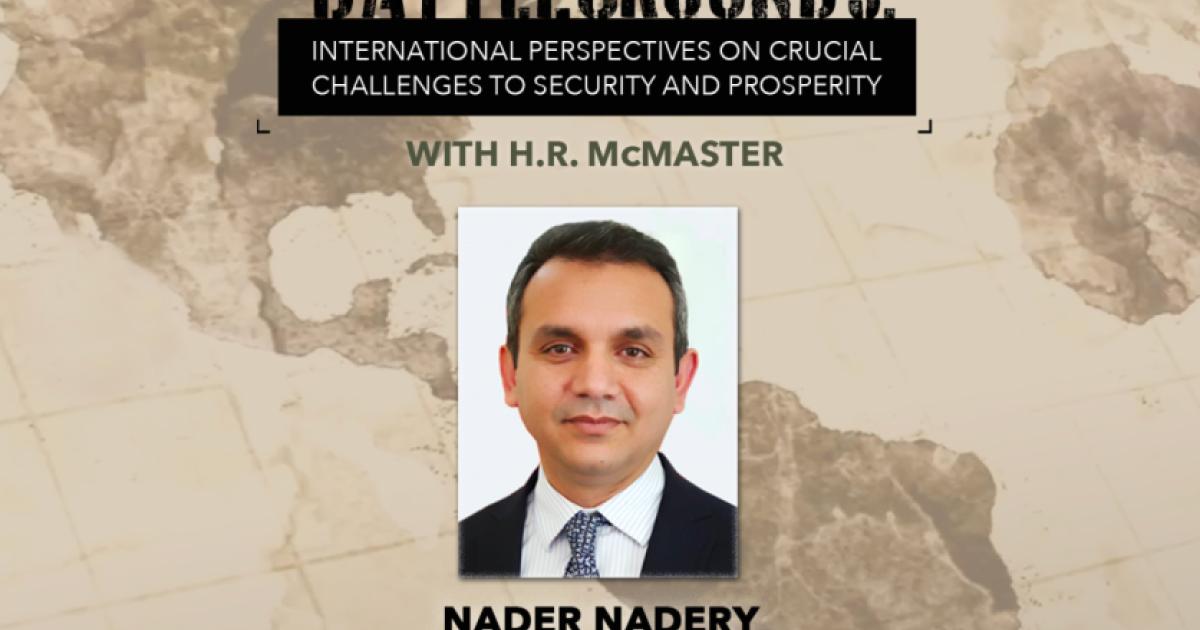 In this episode of Battlegrounds, H.R. McMaster and Nader Nadery discuss human rights law, the dire situation in Afghanistan, and what more might be done to foster peace and protect innocents. 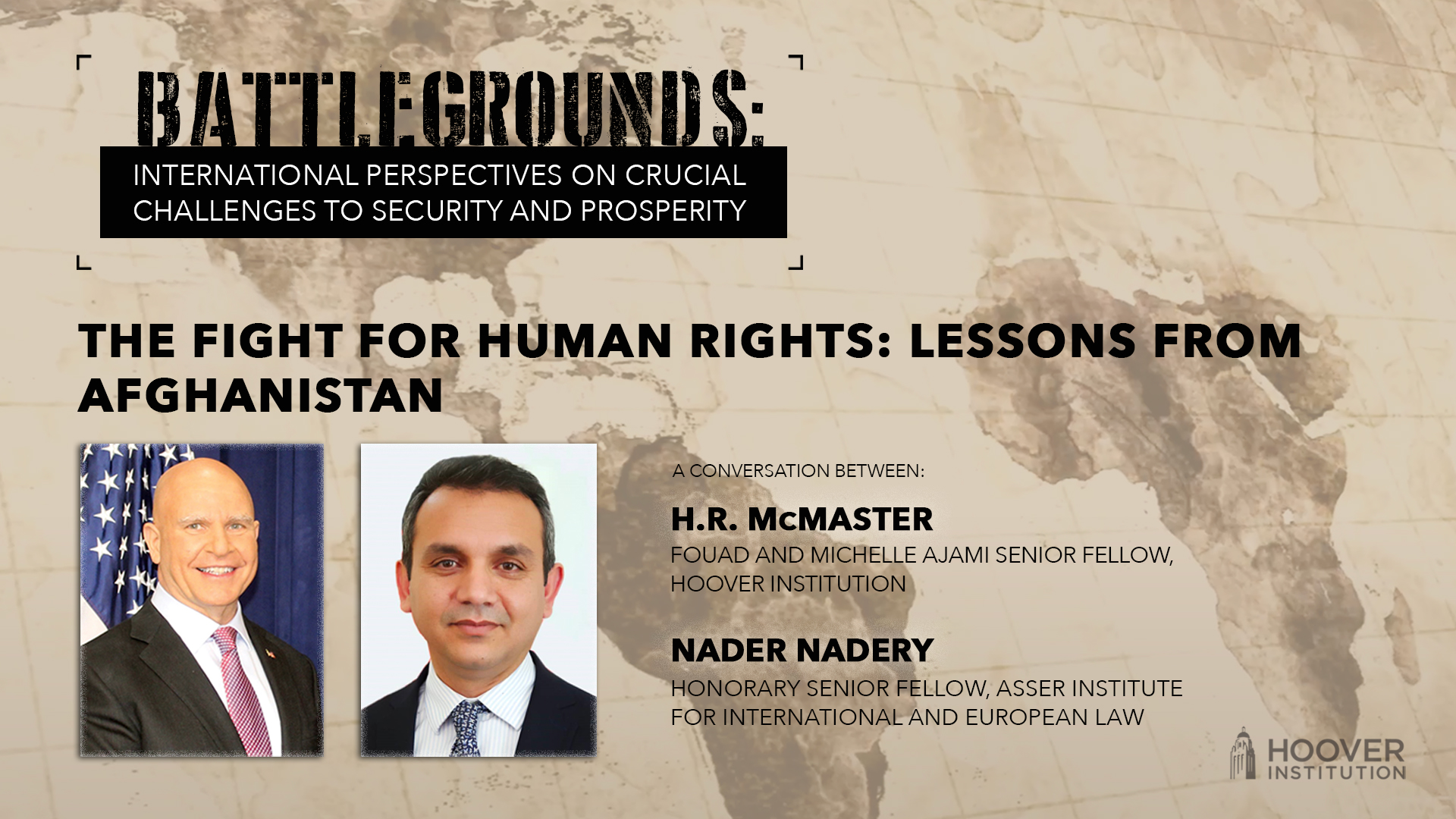 In this episode of Battlegrounds, Nader Nadery, former member of the Islamic Republic of Afghanistan peace negotiation team and former senior adviser to the president of Afghanistan, joins Fouad and Michelle Ajami Senior Fellow H. R. McMaster for a wide-ranging conversation about the conditions and events that led to the Taliban takeover of Afghanistan one year ago.

Afghanistan had to build a government from ashes of a society that collapsed after Soviet occupation, civil war, and the repressive rule of the Taliban, Nadery maintains.

Following the attacks of September 11, 2001, the US government convened the future leaders of the Islamic Republic of Afghanistan in the German city of Bonn to take on the colossal task of state building. Nadery explains that while significant progress had been made then and during the twenty-year US engagement in his country, a central challenge was ingraining a culture of accountability and transparency. The citizens of the country wanted to realize democratic gains, but many state officials hollowed out the fledgling government’s institutions. In exchange for fealty to the Afghan national government, corrupt politicians and organized criminals secured patronage networks for economic profit.

Moreover, the international community was shortsighted in its planning for providing a resolution to the war and in advancing progress for the Afghan government, economy, and society. Echoing McMaster’s argument in chapter five of his book Battlegrounds: The Fight to Defend the Free World, Nadery argues that the United States and its coalition partners wished to fight a one-year war but ended up doing so twenty times over.

Throughout the twenty-year period, Nadery contends, there was gross mismanagement of developmental aid and a lack of focus in infrastructure financing. He says that despite the annual dispersion of $2 billion in nonmilitary aid there hadn’t been a sufficient amount targeted, for example, for fruitful projects, such as five planned hydroelectric dams, that would have created jobs and prevented Afghans from being recruited by the Taliban.

Nadery agrees with McMaster that the peace deal that the United States reached in Doha, Qatar, in February 2020 was grounded in capitulation to Taliban leaders and Pakistan’s long-term effort to undermine the government in Kabul.

Nadery also concurs with McMaster that there was no valid reason for the US government to sign a withdrawal agreement with the Taliban, especially absent representatives of the Afghan national government who had not been invited to the negotiations and whose military had been bearing the brunt of the two-decade-long war. The Americans hadn’t requested permission to invade Afghanistan in 2001, nor had it done so for previous US troop reductions in the past decade, Nadery maintains.

Nadery asserts that Americans were naïve to believe that the Taliban could have forged an agreement in good faith. He says that despite commitments from Taliban leadership that they were willing to share power and peacefully coexist with political adversaries, they hadn’t denounced acts of terrorism or affirmed upholding rights for women. He contends that the Taliban were arrogant in their negotiations with Americans. The Taliban’s position was that the US was leaving Afghanistan in total defeat.

Nadery explains that now that the Taliban is in control of the Afghan government and the country’s resources, it has significantly more power to leverage its presence in the ecosystem of Islamic extremism, which includes al-Qaeda, the Haqqani Network, and Daesh, to be a destabilizing force in Central Asia and elsewhere in the world.

Nader Nadery is an honorary senior fellow at the Asser Institute for International and European law and a former member of the peace negotiation team for the Afghanistan Doha Peace Process. He also served as chair of the independent Civil Service Commission of Afghanistan and senior advisor to the Afghan president on public and strategic affairs as well as on human rights issues. Before joining the government, Nadery served as director of the Afghanistan Research and Evaluation Unit and for seven years he served as commissioner of the Afghan Independent Human Rights Commission.