In a television advertisement that aired last summer in Arizona, John McCain, running for a fifth term in the Senate, strolls through the desert near Nogales with Paul Babeu, sheriff of Pinal County. Beside the two men rises a section of the border fence that the Department of Homeland Security has been erecting to keep undocumented Mexicans in Mexico. “We’re outmanned,” the sheriff tells the senator, who nods knowingly. “Of all the illegals in America, more than half come through Arizona.”

McCain and Babeu chat for a moment about the senator’s “Ten-Point Border Security Plan.” Then McCain, reciting one of the ten points, delivers the line with which the thirty-second spot climaxes: “Complete the danged fence.”

John McCain, fencing off America. Would Ronald Reagan have approved?

Anyone who retains a high opinion of Reagan, whom McCain himself has described as one of his heroes, can hardly help wondering. In 1986, Reagan signed legislation granting amnesty to millions of illegal aliens. Instead of denouncing the undocumented, Reagan invited them to become citizens. If Reagan was right then, isn’t McCain wrong now? To attempt an answer, I’ve listed what we know for certain about my old boss and immigration. Then I’ve done my best to figure out what each item tells us about where Reagan would have stood on the issue today.

What we know for certain, item one: Ronald Reagan was no kind of nativist. In a 1977 radio talk, for instance, Reagan dismissed “the illegal-alien fuss,” arguing that we need immigrant labor. “One thing is certain in this hungry world,” he said. “No regulation or law should be allowed if it results in crops rotting in the fields for lack of harvesters.” 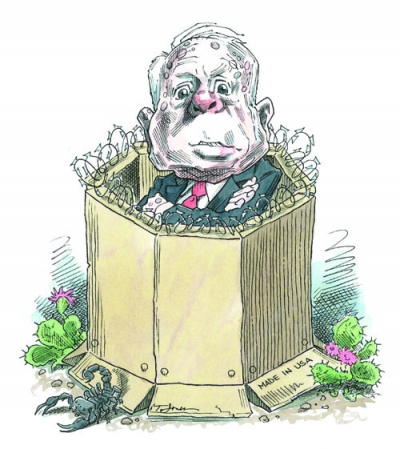 Reagan’s attitude toward the growing Hispanic influence in American life? When announcing his bid for the White House in 1979 he asserted plainly, “I favor statehood for Puerto Rico”—scarcely the position of an Anglo chauvinist. And Reagan again and again declared that a basic, even radical, openness to immigration represents a defining aspect of our national identity. Describing America as “a shining city” in his 1989 farewell address, for example, he said, “And if there had to be city walls, the walls had doors and the doors were open to anyone with the will and the heart to get here.” 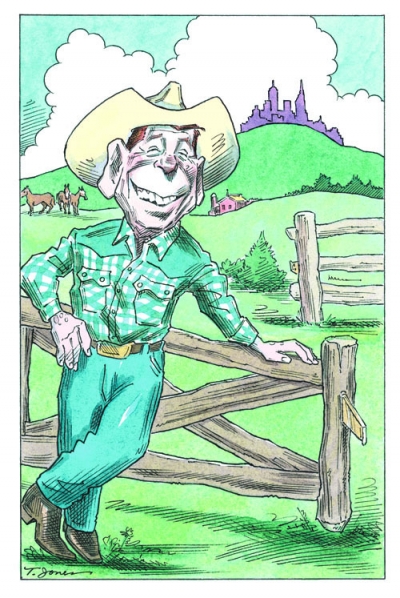 In 1986, Reagan signed legislation granting amnesty to millions of illegal aliens. Instead of denouncing the undocumented, Reagan invited them to become citizens.

What item one tells us, I believe, is that Reagan would have inclined toward reforms like those President George W. Bush proposed in 2006. Under these proposals, illegal immigrants who wished to remain in this country permanently would have received a long but explicit path to citizenship. Those who wished instead to return eventually to their countries of origin would have received the right to register as guest workers. Virtually all illegal immigrants would thus have been dealt with generously. Reagan would have found such a resolution satisfying.

At least in principle.

Which brings us to what we know for certain, item two: the grant of amnesty represented only one aspect of the 1986 legislation Reagan signed into law. The rest of the Immigration Reform and Control Act spelled out provisions—aggressive provisions—for bringing illegal immigration to an end.

“The amnesty dealt with illegals who were already here,” as Edwin Meese III, then attorney general, recently explained to me. “The rest of the ’86 act was intended to get control of the problem so we didn’t have any more coming in.”

The legislation mandated an increase of 50 percent in personnel guarding the border. And it made hiring undocumented workers a crime, requiring employers to attest to their workers’ legal status.

Did Reagan regret these provisions? Did he indicate in any way that he signed them into law reluctantly? If so, the evidence has eluded me. “Future generations of Americans,” the president said at the signing ceremony, “will be thankful for our efforts to humanely regain control of our borders and thereby preserve the value of one of the most sacred possessions of our people: American citizenship.”

If Reagan always believed the country should remain open to immigration, item two tells us, he never envisioned immigration as chaotic or ungoverned. The fate of the Immigration Reform and Control Act would have infuriated him. “The government didn’t do what was necessary to support the enforcement mechanisms in the ’86 act,” as Meese told me. That’s putting it mildly. In the quarter century since Reagan signed the Immigration Reform and Control Act, the federal government has engaged in a protracted dereliction of duty, failing utterly to regain control of our borders. Instead of dropping, the number of illegal immigrants in the country has quadrupled.

“I voted for the 1986 legislation,” Pete Wilson, who served in the Senate at the time, told me recently. “But as it became clear that the federal government wasn’t going to make any real effort to toughen up enforcement, the amnesty only encouraged even more illegal immigration. ‘Go ahead, cross the border,’ it told people. ‘Don’t wait your turn in line at the embassy in Guadalajara or Mexico City. Get a jump, don’t be a chump.’ ”

By abandoning its obligations under the 1986 legislation, Reagan would have seen, the federal government turned Reagan himself into a chump. More to the point, he would have seen that it has turned the American people into chumps.

Not that Reagan would have displayed unease about the illegal immigrants themselves, even now that their numbers have risen to some 11 million. Measures such as the rate at which immigrants learn English, the rates at which they intermarry, and the proportion of the total population born outside the country still fall within historic norms.

Yet Reagan would have concluded that reforms intended to normalize their status would simply have to wait, yielding to a single imperative: restoring the rule of law. Before enacting new statutes, he would have insisted, the federal government must enforce those on the books. It must “regain control of borders.”

Reagan, I believe, would have supported most of McCain’s “Ten-Point Border Security Plan”—more personnel for the border, more money for surveillance systems, more Border Patrol stations. The fence? The man who called on Gorbachev to tear down the Berlin Wall would have felt an aversion to a barrier on our own border, even one intended to keep aliens out, not citizens in. Yet since the fence has already been authorized by law, since it is already partly in place, and since it is intended to run not the full, two-thousand-mile length of the border but only along some seven hundred miles that are especially difficult to patrol, Reagan would have concurred, reluctantly, in completing it.

So Reagan would have approved of McCain’s advertisement? Hardly.

Which leads us to one last item that we know for certain: all his political life, Reagan wooed voters outside his base. Who were Reagan Democrats who gave him landslide victories in 1980 and 1984? Voters of German, Irish, Italian, Polish, and other ethnic backgrounds—in short, the children and grandchildren of immigrants who entered the country at points such as Ellis Island.

Today Reagan would have wooed not only Reagan Democrats but also the children and grandchildren of immigrants who entered the country from Mexico. He would have done so as a matter of principle—as we have seen, he gloried in the country’s basic openness to immigrants—but he would also have recognized that Republicans face a math problem.

As a nation of immigrants, Reagan would have insisted in any advertisement in which he appeared, America must continue to welcome all who enter the country legally. Calming rather than inflaming opinion, he would have noted that last year the Border Patrol reported the lowest number of apprehensions on the southern border in three decades. And he would have argued that even as we complete the fence, we should work with Mexico to achieve prosperity for both countries—and look to the day when we could take the fence back down. Reagan might even have discussed his private 1979 meeting with the president of Mexico. As he explained in a letter to a journalist later that year, Reagan requested the meeting “to ask . . . how we could make the border something other than a locale for a . . . fence.”

The man who called on Gorbachev to tear down the Berlin Wall would have felt an aversion to a barrier on our own border, even one intended to keep aliens out, not citizens in.

As for Sheriff Paul Babeu, Reagan would have kept him off camera. “Senator,” the sheriff says to McCain at the end of his advertisement, “you’re one of us.” One white man to another white man—speaking the very words most likely to alienate every Hispanic voter who hears them? Not in any advertisement in which Reagan would have appeared. He might have acquiesced, grudgingly, in completing the danged fence. But Ronald Reagan was no danged fool.

Available from the Hoover Press is The Debate in the United States over Immigration, edited by Peter Duignan and Lewis H. Gann. To order, call 800.935.2882 or visit www.hooverpress.org.