Reminiscing on the surprises, thought-provoking questions, and variety of renowned guests over twenty-three years of Uncommon Knowledge. 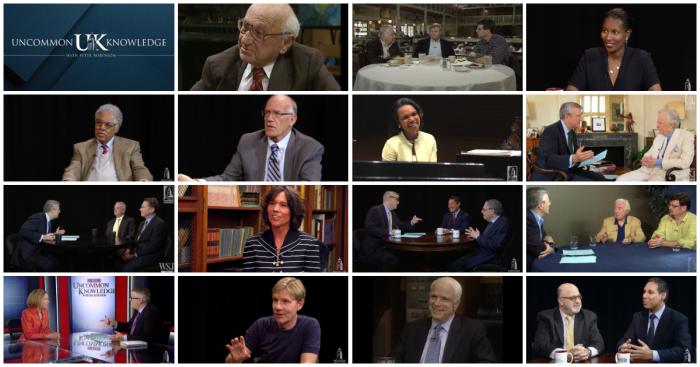 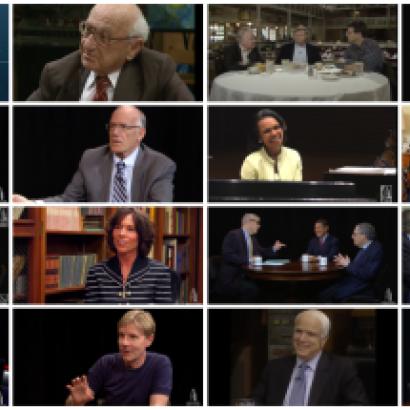 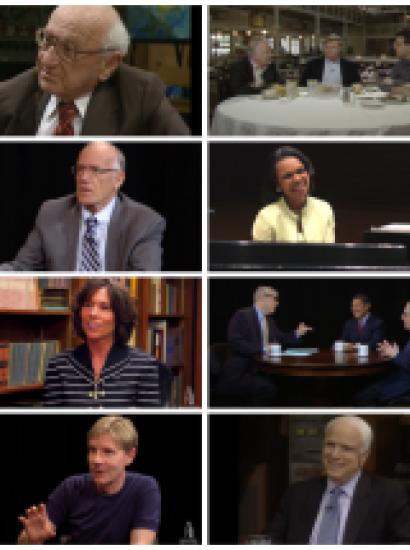 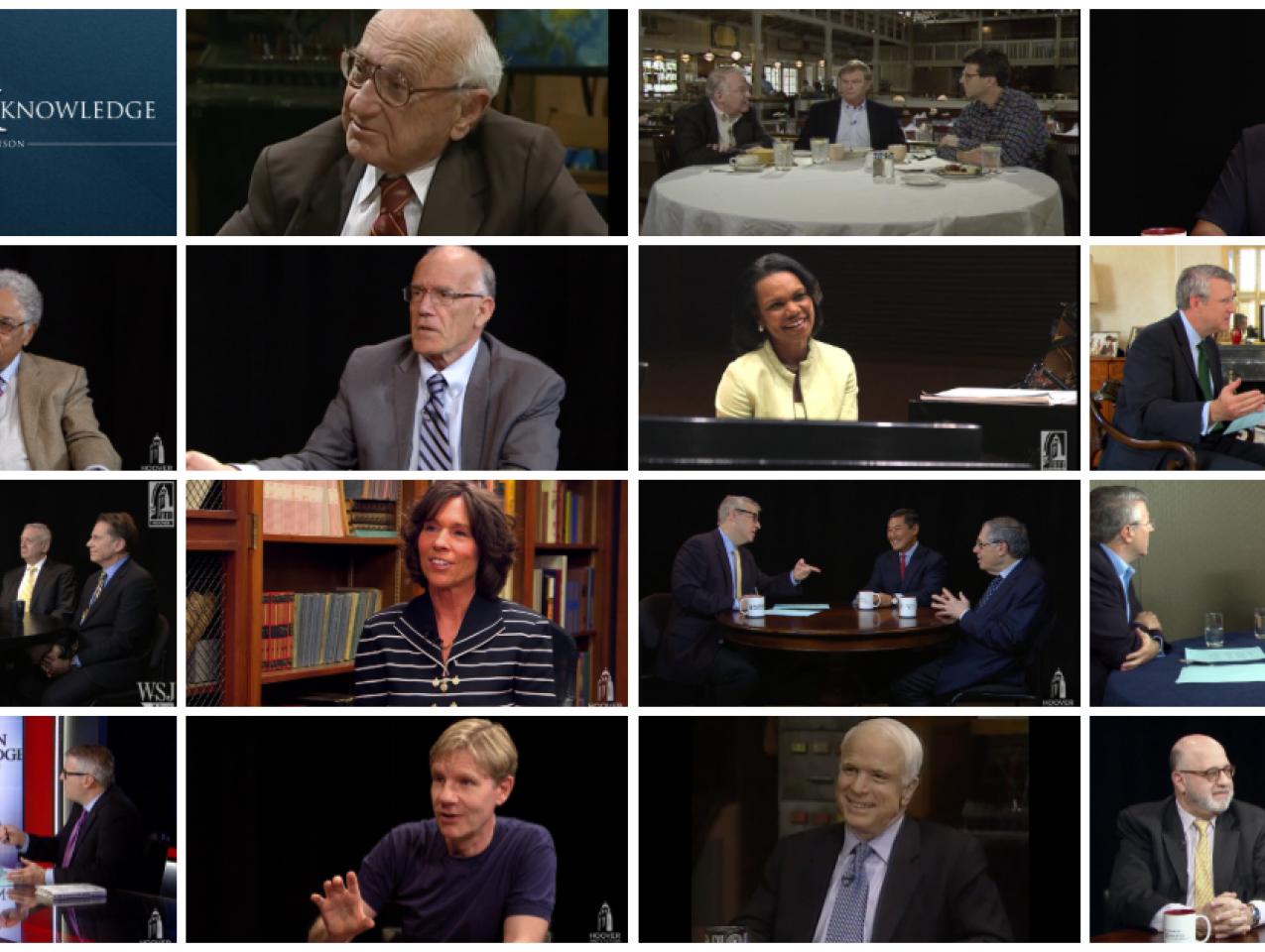 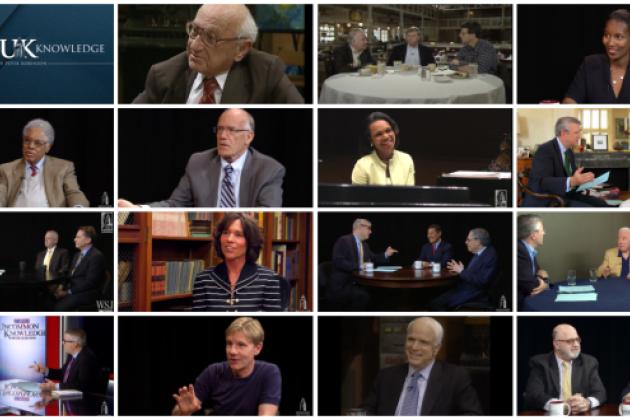 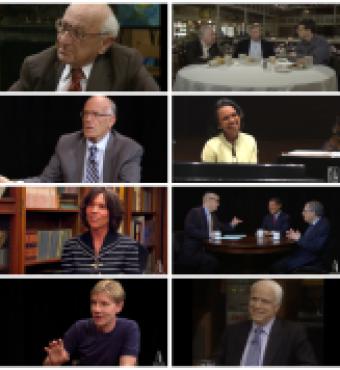 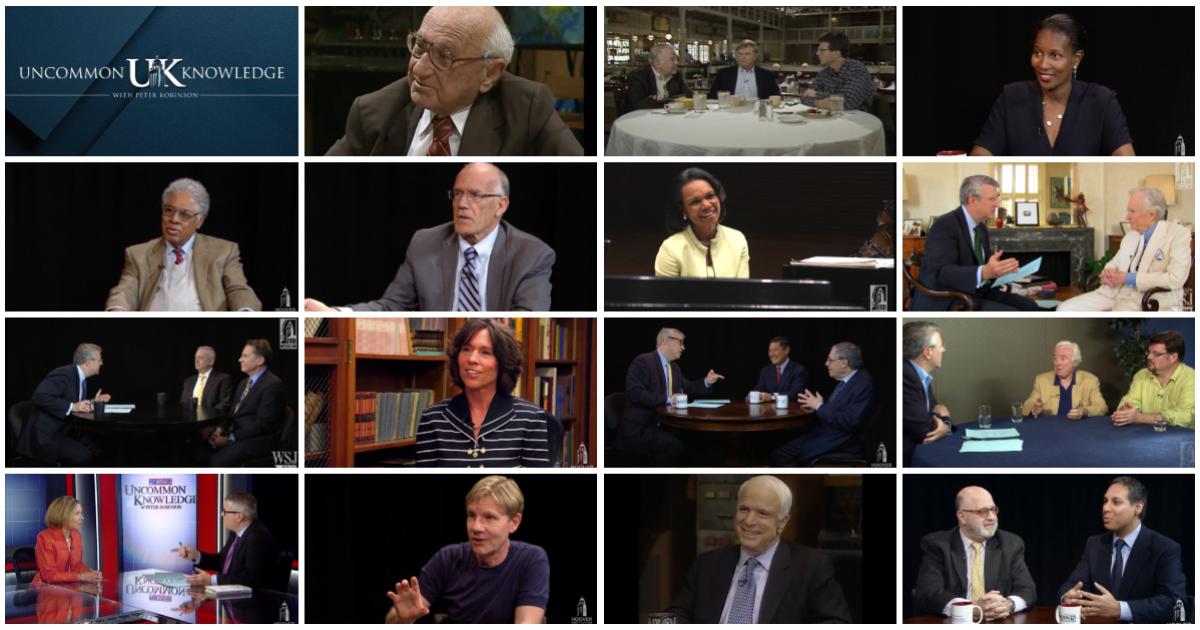 On May 18, 1996, the first episode of Uncommon Knowledge aired, featuring the enduring Peter Robinson interviewing Edwin Meese III and Joseph McNamara in a discussion of the war on drugs. In the inaugural episode, Robinson relates the origin story of his weekly public affairs television series. He had joined the ranks of fellows at the Hoover Institution and noticed something rather unique:

When I arrived … I could see that the conversations that took place at the Hoover Institution, conversations at lunch and dinner, over afternoon coffee, even in the stairwells and hallways, are different from the ones we are all used to seeing on so many public affairs TV shows. These conversations put ideas first, politics second. We thought it would be a good idea to let you in on some of these conversations. [Peter Robinson, Uncommon Knowledge, May 18, 1996]

“Ideas first, politics second” has become the defining principle of Uncommon Knowledge in the 23 years since the premiere of its inaugural episode. Guests from all backgrounds and areas of expertise have appeared for the rigorous intellectual discussions of ideas and policy positions that are not often discussed in the public arena.

Watch the introduction to Uncommon Knowledge in 1996:

The weekly television broadcast is now a video web series reaching viewers all over the world, but its fundamental purpose remains unchanged. In a recent discussion with Robinson about his 23 years as host, he talked about his process and focus for the show. He explained that he spends an average of four to five days of work researching and writing his scripts for interviewing each guest, diving deep into research of their past work and experiences so he can ask them the thought-provoking questions the show is known for. When asked about these questions, he said his goal is always to ask the guests unexpected questions so the audience can see the guests thinking in action. When asked about his favorite visitors over the years, he said, “I vividly remember those guests who have now passed.” He reminisced about his most cherished and most surprising moment on the show, during a conversation with Nobel prize–winning economist Milton Friedman. During a discussion about tax reduction, Robinson asked him about cutting taxes as moral argument. Friedman responded, “Are there any other arguments?” Robinson said this moment took him by surprise, as he realized that Friedman’s economic theories were not merely an intellectual game but were, in fact, a way of bettering the world and doing the right thing.

Watch the moment that took Peter Robinson by surprise:

Robinson also reminisced about his dear friend William Buckley passing to the torch in the final episode of Buckley’s renowned program, Firing Line, to Uncommon Knowledge in 1999. He conveyed that it was an honor to him that Buckley would name Uncommon Knowledge as Firing Line’s successor and loved having Buckley as a guest on the show later on. He recalled having Buckley and Christopher Hitchens for a debate on the show and how he enjoyed asking them thought-provoking questions to show them thinking through different ideas.

In honor of Uncommon Knowledge’s 23 years, the Hoover Institution has released a new interview with one of the show’s most cherished guests, Thomas Sowell. In this episode, Thomas Sowell talks about the newly revised edition of his classic work, Discrimination and Disparities. He sits down with Peter Robinson to discuss the long history of disparities among humans around the world and throughout time.

In the more than two decades years since it first aired, Uncommon Knowledge has reached millions of people, spreading thought-provoking civil discourse and ideas not often discussed in mainstream media. Guests over the years have included famous authors, politicians, researchers, professors, entrepreneurs, and more. Each has brought a unique worldview to the show for rigorous intellectual discussion. Condoleezza Rice played the piano, President George W. Bush reminisced about his time in office, Milton Friedman broke down his economic theories, Thomas Sowell analyzed the myths of economic inequality—to name just a few incredible moments.

Watch a brief snapshot of Uncommon Knowledge through the years here: