Obama could calm markets with some swift policy moves and reassuring words.

With the U.S. (and global) economy contracting at the steepest pace since 1982, we need a clear and coherent policy response rooted in a sound analysis of how we got to this dreadful place. Washington's changing explanations, ad hoc bailouts, massive special-interest spending, and references to the once-in-a-lifetime nature of this event convey a sense that policy makers do not have one. 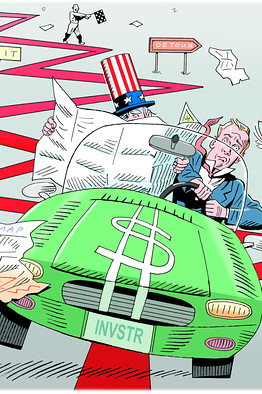 We now have a giant margin call and painful deleveraging following the mother of all credit cycles. The resulting widespread insolvency in financial institutions was magnified by the over-the-counter derivatives subject to counterparty risk creating uncertainty about who was or might quickly become insolvent. The tardy Treasury and Fed recognition, ad hoc bailouts, and letting Lehman fail added confusion. Private capital fled and even interbank lending froze.

More rapid, transparent, efficient triage -- closing insolvent, nonsystemically important institutions and merging marginal ones with healthy ones -- is required. That's what eventually made our Resolution Trust Corporation solution to the savings-and-loan crisis work, along with selling the acquired assets off in large blocks. Exhorting the banks to lend -- when examiners are in their offices telling them not to -- cannot work. Hammer out an approach consistent with FDIC resolution procedures. Include a sensible circuit breaker for the procyclical interaction of bank capital rules and mark-to-market accounting. But beware the law of unintended consequences, such as restrictions on banks causing private capital flight or foreclosure relief creating millions more delinquencies.What needs to be done to ease the economic and financial crisis? The first order of business is still to recapitalize the banking system, with equity injections and a Resolution Trust-like, toxic-asset removal program. The first $350 billion was not enough to repair the balance sheets of financial institutions that needed to raise $1 trillion before the height of the financial crisis (although former Treasury Secretary Henry Paulson is correct that it prevented a worse contraction of lending).

While we have legitimate infrastructure needs, public-works spending historically has been too slow, has delayed private and local government spending, and created few jobs for the unemployed. The programs are not labor-intensive and require skills few unemployed have. Public works did not end the Great Depression. Even FDR's treasury secretary, Henry Morgenthau, said in 1939, "We have tried spending money . . . and it does not work . . . we have just as much unemployment . . . and an enormous debt to boot." Nor did a decade of infrastructure spending help the Japanese escape three recessions and a decade of stagnation. It did, however, saddle Japan with a national debt burden four times ours.

President Barack Obama has wisely pressed for legislation free of Congressional earmarks. But what about the local officials with incentives to build if someone else pays for it? Who guarantees the national benefits exceed the costs? Worse yet, once started, it will be difficult to stop this flow of easy money from Washington. A year or two from now we'll have many partly finished projects over-budget and behind-schedule, in need of their own continuing bailout. For these reasons we need to focus on projects of proven national benefit, such as speeding up the re-equipping and refurbishing of the military and expanding and upgrading the electrical grid.

The one-time tax rebates last year were mostly saved, not spent; Mr. Obama's planned rebates will do no better. Permanent reductions, especially in rates, would be much more stimulative. If temporary tax cuts are necessary, at least provide some incentives to reduce layoffs and/or spend now, with temporary payroll-tax or sales-tax rate reductions (via funds to states).

With the federal-funds rate close to zero, the Fed is trying to affect credit and spending via expectations of future monetary policy lowering long rates, and by use of its balance sheet. Fed Chairman Ben Bernanke is right to emphasize the asset side of the Fed's balance sheet, and he should also buy longer-term non-Treasury securities. It is vital that the Fed finish the long-delayed project of a well-capitalized derivatives clearinghouse, in order to reduce the risk of another financial crisis emanating from the derivatives markets.

But there is still more that can be done. With Treasury in control of Fannie and Freddie, it can lower conforming mortgage rates by explicitly stating the implicit guarantee. With many small importers unable to get normal letters of credit, national export-import banks might provide them (unsubsidized). With hundreds of billions of dollars of American companies' earnings overseas due to heavy taxes on repatriation, a low-tax repatriation holiday would add substantial deposits to our banking system.

These policies, those already in the pipeline, and the natural adaptation of the economy have the best chance to reduce the length and severity of the recession. But they still leave an economy and financial system on government lifelines. We need a glide-path back to normalcy.

First, the Fed must forestall future inflation by withdrawing its immense liquidity injections in favor of private extension of credit as soon and predictably as feasible. Its failure to do so earlier in the decade helped create this mess.

Equally important, the new administration needs to be clearer on its long-run goals and policies. Mr. Obama deserves time to lay out his longer-term agenda, but he must reassure those who would put capital at risk that we are not headed toward a European-style social welfare state. Will he push for financial reform with better intelligence, the centerpiece being that any firm that is or could quickly become too big to fail must be subject to real-time capital adequacy and risk disclosure and monitoring? Or will he just push for more punitive regulation?Second, the various guarantees and insurance will need to be unwound without causing another panic. As their expiration dates approach, (e.g., April for money-market funds), pressure will be intense to extend them to prevent a mass exodus of capital. While they may have to be extended briefly, predictable ending dates should be enforced, if necessary with declining percentages to zero (insure 95%, then 90%, etc.).

Mr. Obama has pledged to go through the budget and shut down ineffective programs, but how much shorter is his list than mine or yours? Is he capable of a "Nixon goes to China" on Social Security, as President Bill Clinton once hoped to do? Or will he push for tax reform and simplification with a broader base and lower rates?

One thing is certain: Investors, workers and employers need to have a sense of where tax, spending and regulatory policy are headed, or they will postpone decisions and further weaken the economy.