Islamic finance—the premises of which prohibits riba, or the payment of interest, requires that economic action be grounded in exchanges of actual, not speculative products, and shared profits and losses—is a booming industry worldwide. Few countries have committed greater financial, institutional, and educational support to its development than Malaysia. Launching its first full-fledged Malaysian Islamic bank, Bank Islam, in 1983, today Malaysia boasts the world’s third largest Islamic finance market (only Saudi Arabia’s and Iran’s are larger). 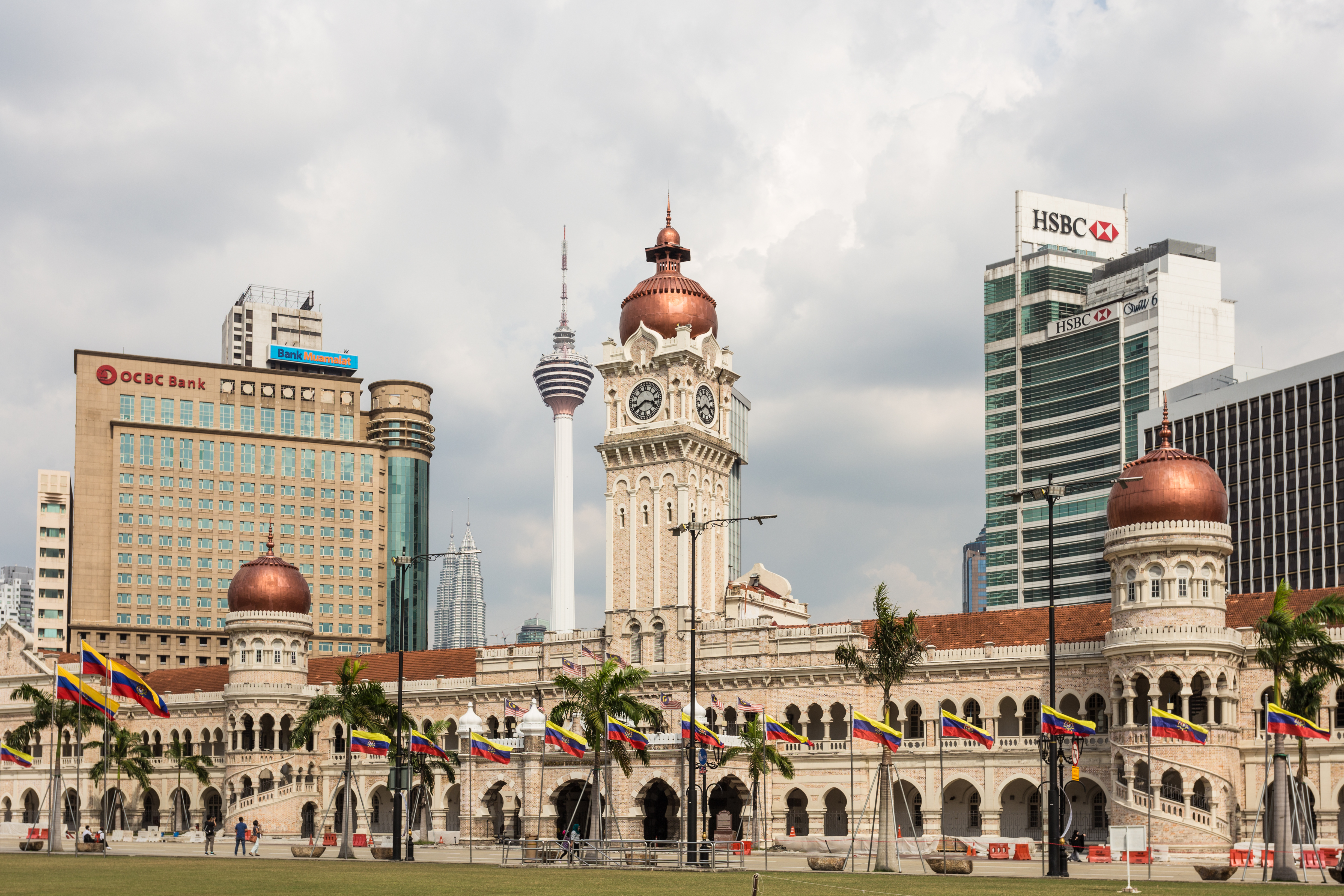 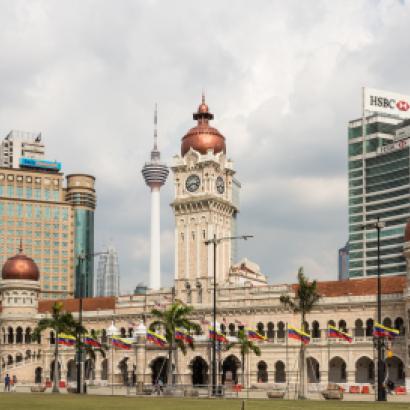 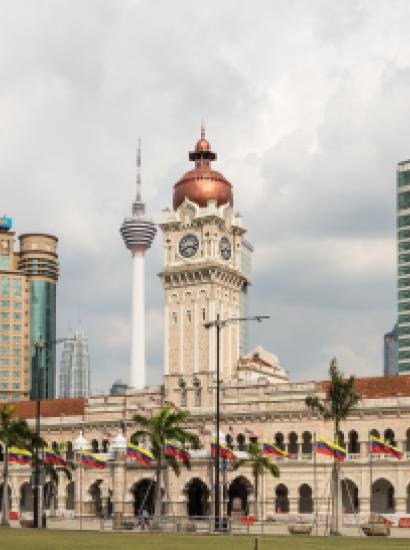 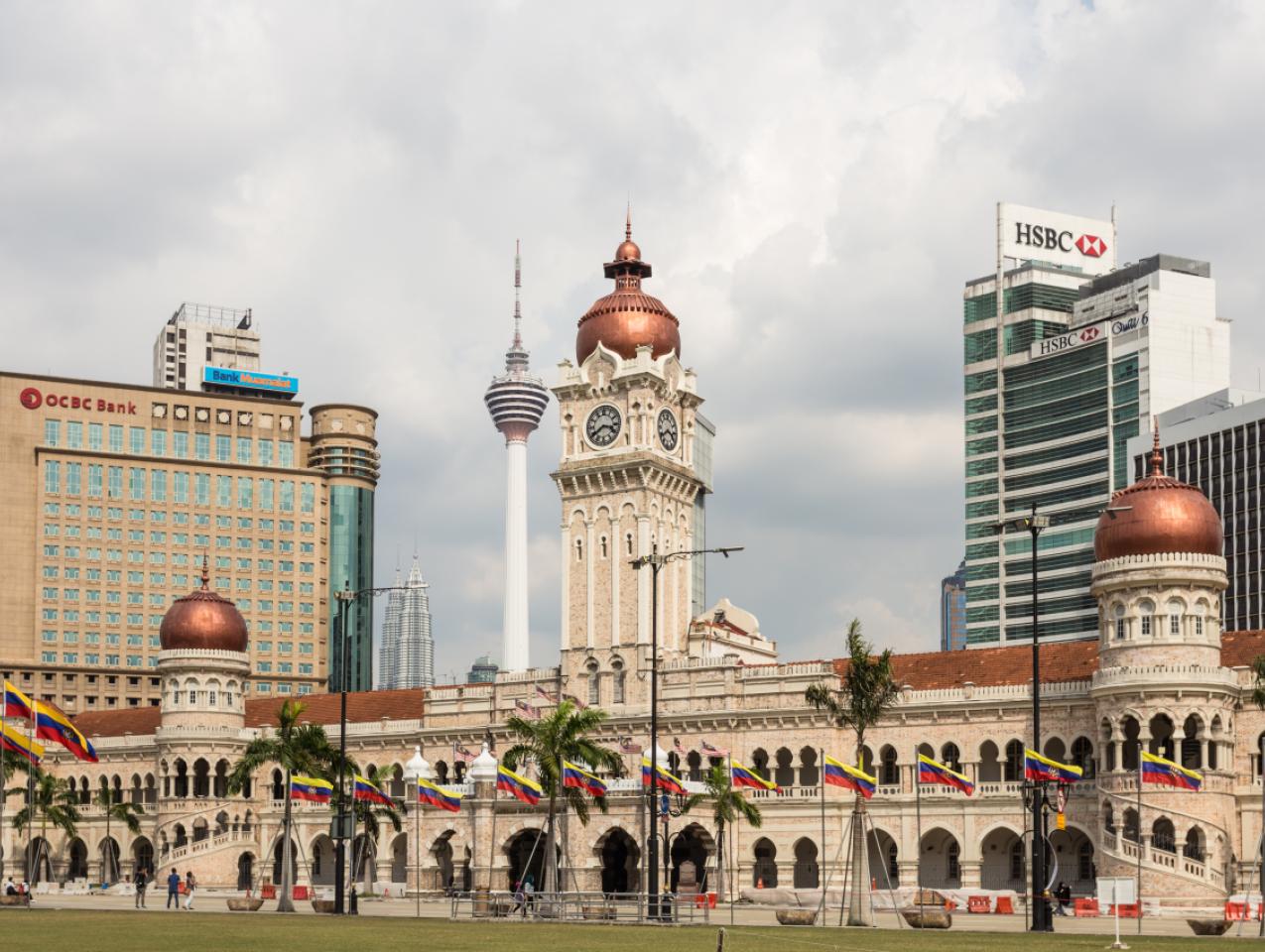 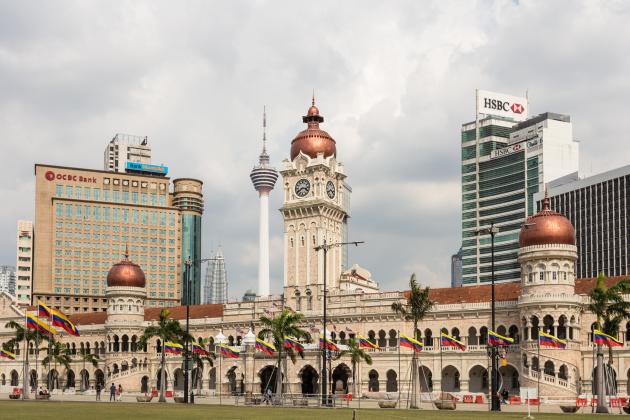 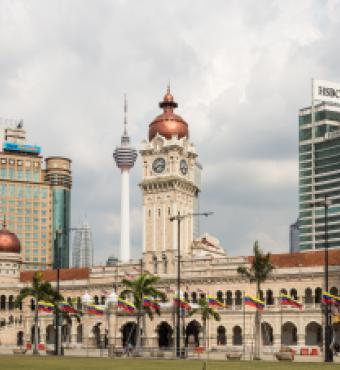 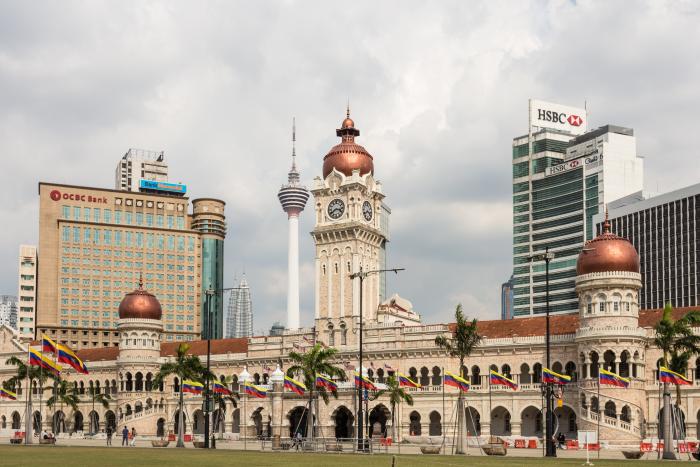 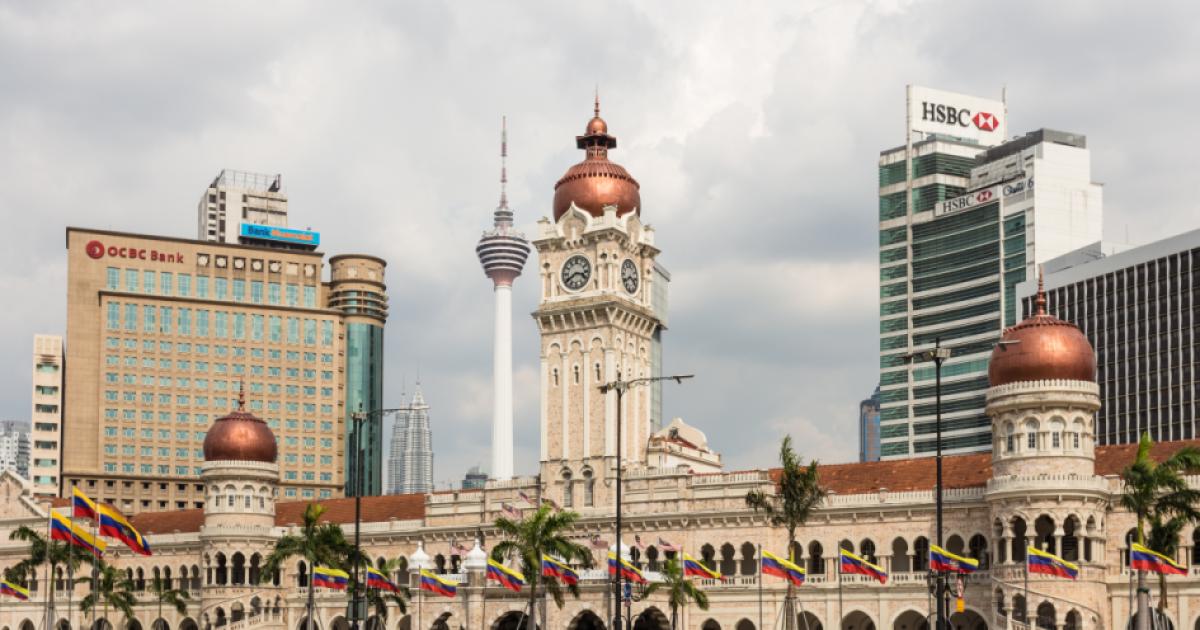 Islamic finance—the premises of which prohibits riba, or the payment of interest, requires that economic action be grounded in exchanges of actual, not speculative products, and shared profits and losses—is a booming industry worldwide. Few countries have committed greater financial, institutional, and educational support to its development than Malaysia. Launching its first full-fledged Malaysian Islamic bank, Bank Islam, in 1983, today Malaysia boasts the world’s third largest Islamic finance market (only Saudi Arabia’s and Iran’s are larger). Offering the world’s first sharia-based commodity trading platform on the domestic stock exchange (Bursa Malaysia) and issuing the world’s first sovereign sukuk (Islamic debt instrument) and corporate sukuk in 2002, Malaysia leads the global Islamic finance industry (IFI) in product development. Malaysia’s financial metrics are also top-ranked:  54% of global sukuk; takaful (Islamic insurance) at 15% of gross written premiums, compared to the average of 8% for Middle Eastern countries; 314 Islamic investment funds (no jurisdiction has more) totaling US$22.7 billion at the end of 2015; and an Islamic capital market that currently accounts for 60.1% of the Malaysian total. Islamic finance now makes up 25% of the country’s entire banking industry, and its central bank, Bank Negara, anticipates that figure will rise to 40% by 2020.

Since liberalizing its financial regulations, Malaysia has become a global Islamic financial hub, with several major international banking institutions now locating their global headquarters or regional operations in the country. The vision of the Muslim financial professionals, experts, scholars, and state agents who make up the industry is prodigious:  in interviews, they talk about becoming the transnational Islamic alternative to Wall Street, turning the axis of world attention from political Islam to Islamic finance, and proving “Islamization” can mean big business and big money for Muslims and non-Muslims alike.

That vision is not built on hope or hype alone. The country’s Islamic financial industry is bolstered by massive institutional investment from such sources as the government pension fund, the Muslim pilgrims’ fund, and the national sovereign-wealth fund. The government has put vast systems in place to create an environment ripe for IFI success. Bank Negara sets high standards for sharia governance. Parliament has passed dozens of IFI laws and acts to ensure regulatory compliance. Bank Negara vets all sharia scholars (known as sharia advisors) who evaluate and approve IFI products and issue obligatory fatwas, or rulings, to Islamic financial institutions. The remuneration of sharia advisors is fixed and each can serve only one bank and one takaful company. (By contrast, it has been reported that there are sharia advisors in Middle-Eastern countries sitting on the sharia boards of up to 80 institutions, and conflicts of interest abound.)

An important result of all of these moves has been the emergence in Malaysia of IFI elites—Islamic bankers, sharia scholars, and Islamic economists. Above them are members of Bank Negara’s powerful Sharia Advisory Council (SAC)—a group of highly educated, cosmopolitan scholars of fiqh, muamulat (sharia of sureties and commerce), and, by their reasoning, masters of ethical money-making. Scholars with impeccable Islamic and technical expertise and pedigrees—generally sharia trained in the Middle East (most often the renowned Al-Azhar University in Cairo) and PhDs in Islamic finance from universities in the West (often Loughborough or Edinburgh), members of the SAC call themselves “Islamic business developers” and “entrepreneurs.” They publish their research under the auspices of Bank Negara’s institutes and think tanks, write books and journal articles, and speak at international and local conferences. They travel widely:  several serve on the boards and committees of Middle Eastern businesses and banks and on Hong Kong, Singapore, and London financial institutions with Islamic subsidiaries. Some advise organizations such as huge data-processing centers which are seeking to generate sharia-compliant operations for the global Islamic market. Others are actively involved in helping European and Japanese banks set up sharia-compliant divisions. Perhaps most prominent in this elite cohort is Dr. Mohammad Daud Bakar, chairman of Bank Negara’s and the Malaysian Security Commission’s SACs, sharia board member of the Dow Jones Islamic Market Index, the National Bank of Oman, BNP Paribas (Bahrain), Morgan Stanley (Dubai), the Bank of London and Middle East, and CEO of his own sharia and multi-service financial and management consulting firm, Amanie Business Solutions with offices in Kuala Lumpur, Dubai, Cairo, Seoul, and other world capitals. Beyond following the “one bank/one takaful” rule for its sharia advisors, Bank Negara puts no restrictions on sharia advisors to otherwise profit from their expertise and high-flyers like Daud Bakar reportedly make millions through consulting and lecturing.

Moving as easily in banks and boardrooms in the Arab world as they do in the West, Daud Bakar and other globe-traveling sharia advisors in Malaysia are celebrated as “hybrid Muslims”—traditional sharia scholars of the highest ability and purest Islamic credentials, but with professional, technical, and global and capitalist experience that also ranks them as experts in modern finance, information technology, management, economics, and accountancy. “Hybridity” also suggests their ability to converse in all four Sunni schools of Islamic jurisprudence (not just the Shafi’i madhab or school of law traditionally used in Malaysia) as well as in secular business domains.

While they develop close relationships with Islamic banks and boards in the Middle East, Malaysian sharia advisors still privately bemoan what they claim is a lack of knowledge and professionalism in the Arab world concerning Islamic economics and business ethics. They describe “fatwa shopping” (the practice of a financial institution or customer seeking out the most favorable sharia opinion) and describe “sharia bribes” and “sharia payoffs” in other sharia jurisdictions. By contrast, sharia advisors in Malaysia insist they are incorruptible—unlike sharia advisors in Arab settings who often are “in the pocket” of banks, governments, and corporations.

Claiming the superiority of Malaysia’s Islamic financial industry and regulatory standards and its ethics, sharia advisors believe they are capable of shifting Islam’s economic power center from the Middle East to their own Southeast Asian shores. Malaysia’s IFI policies are West-friendly and even Arab-antagonizing because they tend to apply more flexible sharia interpretations for products than are applied in Arab nations. Malaysia’s sharia advisors wear business suits, not thoubs or jubbahs. Powerful Muslim women, sometimes unveiled, also appear as sharia advisors, bankers, and regulators. Once “little brothers” to Muslims in the Arab core, Malaysian IFI experts now claim to be reversing the flow of Islamic knowledge and influence from its Arab roots to the new Islamic capitalist core in Malaysia. Theirs, they believe, is an updated, modern Islamization, which replaces, they say, Islamic economic backwardness and traditionalism with a vibrant, globally promising alternative; a “bridge” or a “handshake” to the West that is potentially world-changing.  Islam had extended its form of capitalism around the world, carrying Medina’s financial principles and the riches of the Muslim empire along the Silk Road and into the far reaches of Asia, long before the crushing advent of Western capitalism and its colonial forces. But the tide, Malaysian IFI experts believe, is turning. Islam and sharia could now provide the model of responsible business practices to the point at which it rivals or even overtakes Western and conventional global finance.

Whether that happens or not is unknown. But what IFI experts in Malaysia believe is that they are rehabilitating Islam in the eyes of the West, presenting (unlike the Arab world and jihadist Islam) what one sharia advisor evocatively described to me as “business and banks, not bombs.”

The growth and legal power of the “liberal” Malaysian Islamic economy and its sophisticated financial products appear outwardly to exist far beyond the illiberal politics of Islamization or Islamism, and nothing in Malaysia’s IFI industry implies the conservative, repressive, and intrusive premises that sharia demands of individuals. Islamic economics is clearly the most acceptable of Islamizations, allowing a Muslim elite to operate adroitly within (and profit from) capitalism, offering hybrid figures such as  Daud Bakar to the Arab and Western world, and welcoming Muslim and non-Muslim investors alike.

But for any close observer of Malaysian politics, three significant ironies emerge. First, while Malaysia touts to local and global bankers, investors, and capitalists a form of Islamization that sits easily with the pursuit of profit, opens the IFI door to the West, and hopes to overtake the Arab world in the production of Islamic knowledge and profit, Muslim lawmakers in Malaysia seek to emplace a traditional version of Islam and sharia that is increasingly conservative, authoritarian, powerful, and committed to Islamism and social control over Muslim (and even non-Muslim) public and private lives. As Malaysia invites the West to share in its Islamic economic vision and critiques the Arab core for its economic traditionalism, it also contemplates putting in place strict hudud (Quranic punishments) law for its Muslim citizens and fashioning the nation into a full-blown Islamic state.

Second, it bears mentioning that Malaysia has the highest income disparity between rich and poor in Southeast Asia. While sharia advisors tout Islamic economic foundation in social justice, to date IFI in Malaysia has accomplished little in that regard.

Third, while Malaysia fashions for itself a hypermodern, globally outward-looking, and religiously regulated Islamic economy, it is important to note that investigators around the world are tracing out the trail of a billion-dollar corruption scandal that appears to lead directly to Malaysian Prime Minister Najib Abdul Razak, identified for having personally received $731 million from a government fund under his direction. Perhaps Voltaire said it best: when it is a question of money, all men are of the same religion.