Jerry Brown Meets Doc Brown: Has California Gone “Back To The Future” On Taxes And Crime?

Despite changing demographics and a sharp veer to the ideological left, is it possible that California could take a political trip back to the future as two staples resurface that drove the state’s politics in the more conservative 1980s and 1990s? Look around and you’ll see indications that even in this liberal bastion on the left coast, the issues of taxes and crime are stirring again. 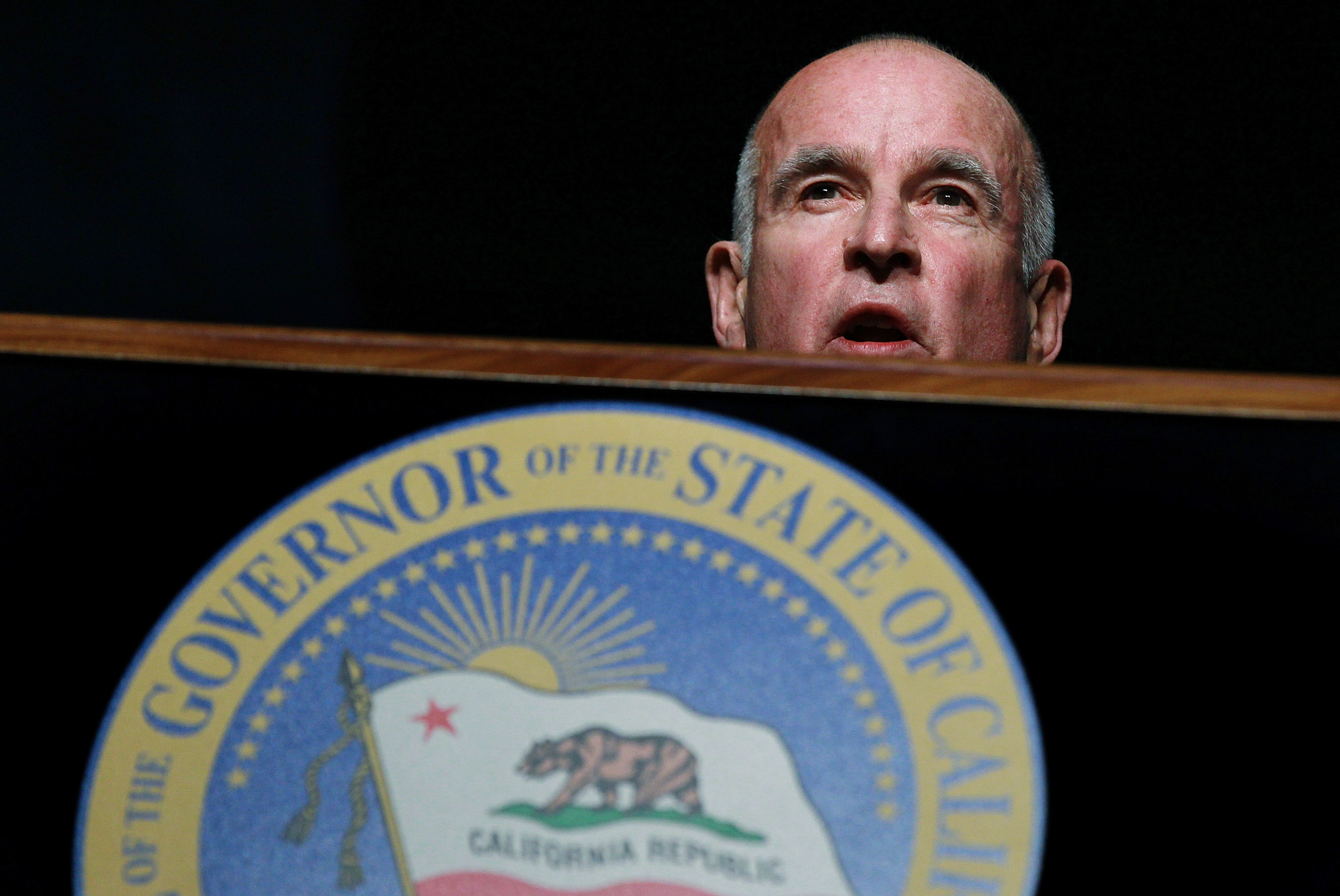 Jerry Brown Meets Doc Brown: Has California Gone “Back To The Future” On Taxes And Crime? 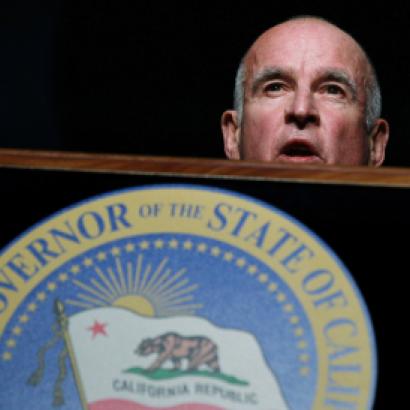 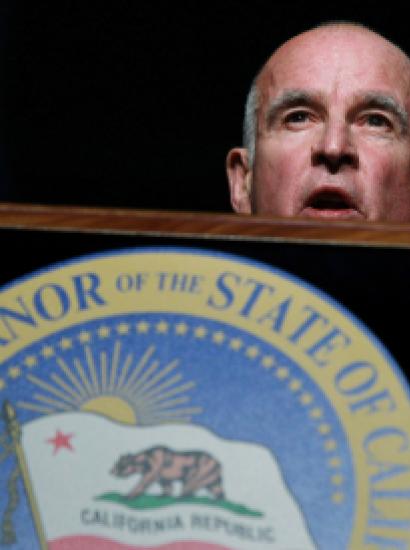 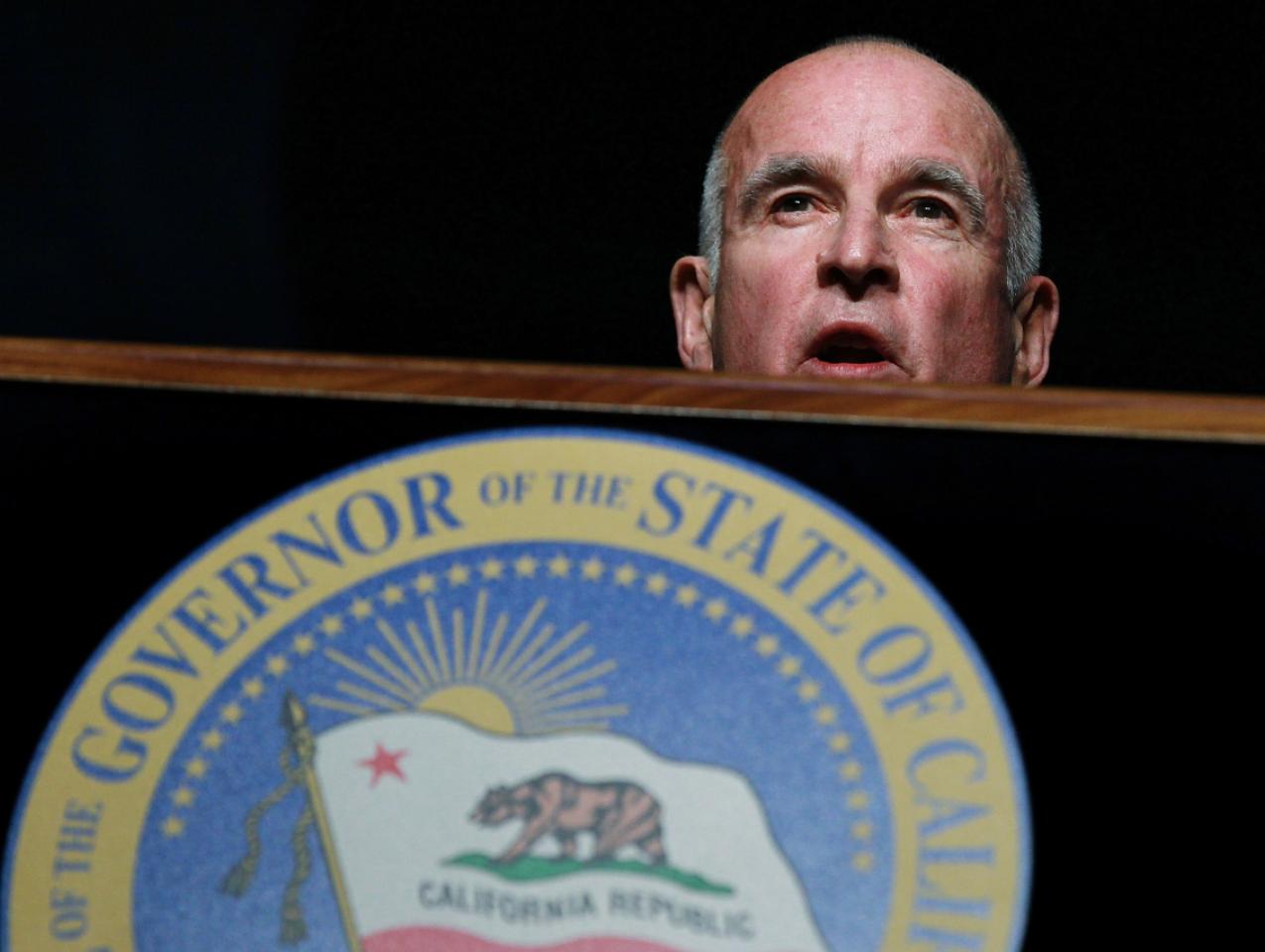 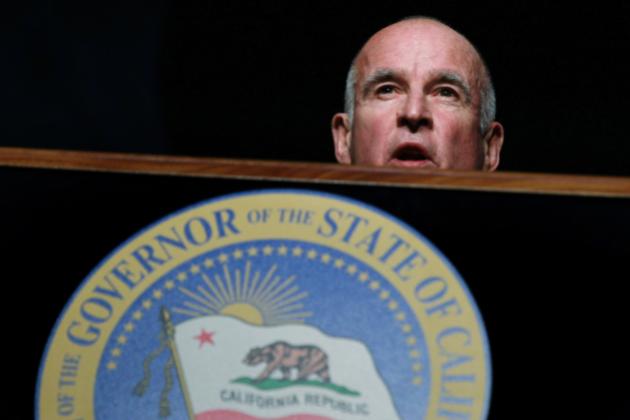 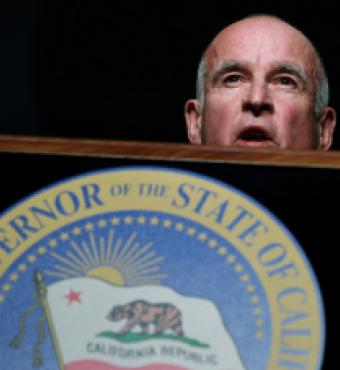 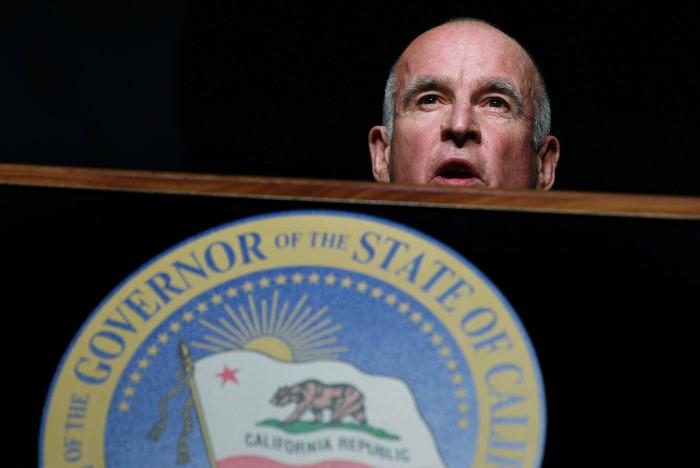 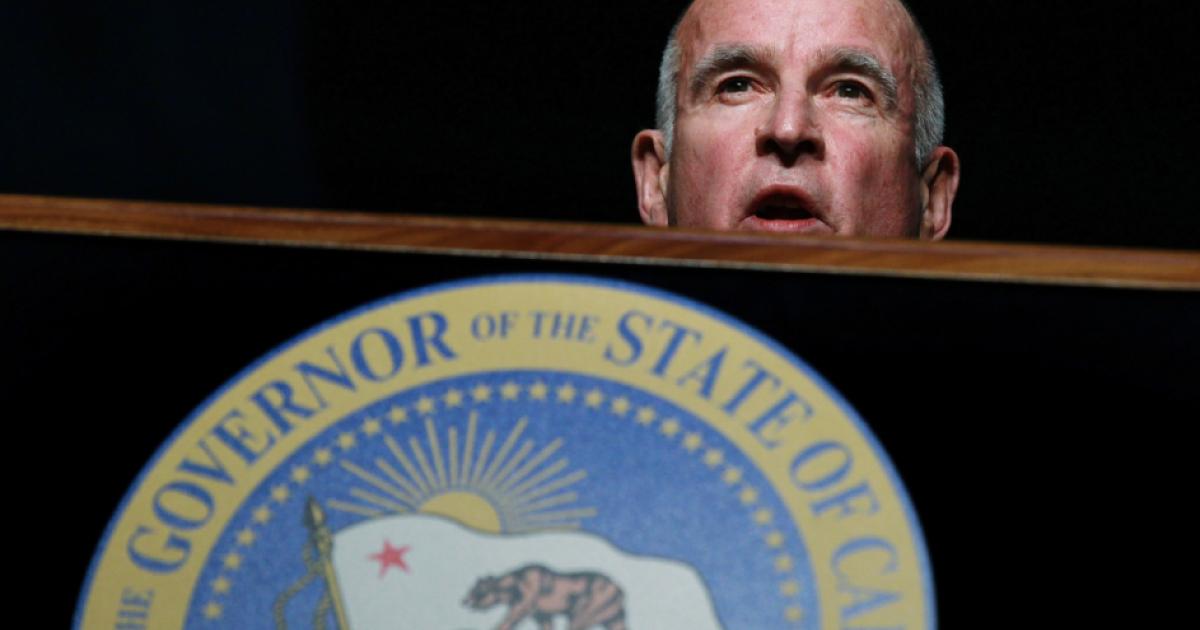 Despite changing demographics and a sharp veer to the ideological left, is it possible that California could take a political trip back to the future as two staples resurface that drove the state’s politics in the more conservative 1980s and 1990s? Look around and you’ll see indications that even in this liberal bastion on the left coast, the issues of taxes and crime are stirring again.

From the time when cinema’s Doc Brown (Dr. Emmett L. Brown, ably played by Christopher Lloyd) was sending his flux-capacitor equipped DeLorean back in time to today’s California run by Jerry Brown—a past-and-future character if there ever was one—attitudes on the issues of taxes and crime seemed to have shifted dramatically.

Considering recent evidence, one might think that the tax issue has faded from the conscience of Californians, most of whom were not around when the state’s voters kicked off a national tax revolt that helped propel Ronald Reagan to the presidency by overwhelmingly passing property tax-cutting Proposition 13 in 1978.

In a Wall Street Journal piece from a year ago leading up to the 2016 election, I asked, “Nearly 40 years later, many Californians are wondering: Will the tax revolt mind-set die where it all began?”

After all a measure on the 2016 ballot (Proposition 55) extended the highest-in-the nation income tax that voters put in place just four years previously; a cigarette tax passed, as did many local taxes and bonds.

This year’s legislative session included a gas tax increase, the cap-and-trade extension, which many call a tax increase because it raises revenue for the government to spend, and a document tax to fund housing issues. This legislative session probably produced the most pro-tax successes since the 1935 legislature created both a state income tax and a vehicle license fee.

Yet all this tax activity may be driving voters to a tipping point to say enough!

The first indication is the California electorate’s sour reaction to the gas tax. In a University of California Berkeley Institute of Governmental Studies poll conducted after the gas tax increase became law, 58 percent opposed the gas tax, 39 percent solidly opposed. The twelve-cent a gallon tax will not even be collected until November. The negative reaction to the tax seen in the poll likely would increase once the tax adds to the price of gasoline at the pump.

The test of new California resistance to taxes could well occur in November 2018. Two measures to repeal the tax have been filed. A gas tax repeal measure could rally Republican voters to the polls during the general election, especially if no Republican makes the runoff for either of the state’s high-profile offices, governor and United States senator. Since the state’s Republican Party is said to be behind one of the repeal initiative proposals,  polling shows that this is a powerful issue among voters. In addition a Southern California state senator, Democrat Josh Newman, is facing a recall effort centered on his gas tax vote.

The heated debate over extending cap andtrade to reduce greenhouse gases centered on the additional costs that would be felt by California consumers. The word “tax” would have dominated were a word cloud image created over word use frequency during the cap-and-trade debate. Increased costs generated by cap-and-trade demands were labeled a hidden tax.

California citizens have yet to feel the additional costs that the cap-and-trade measure might add—anywhere from fifteen- to seventy-three-cents per gallon of gasoline over time, according to the state’s legislative analyst.

If the gas tax repeal makes the ballot, an interesting political dynamic will play out in defense of the tax. A campaign to preserve the tax would likely have the greatest financial support. The tax was supported by both labor and big business. They argued that California’s economy depends on improved transportation and updated roads and highways. Business also supported the cap-and-trade bill, fearing if it were defeated an unelected California Air Resources Board would put a tougher, command-and-control greenhouse gas restriction in place.

The individual voter who pays the freight of the gas tax increase, additional car fees, and increased costs linked to the cap-and-trade law, however, may want to use the gas tax repeal initiative to send a message.

A rejection of the gas tax increase would certainly be a marker that as liberal as Californians have become, there is still a conservative streak when it comes to taxes and a potent issue from the past could return.

Meanwhile there is the issue of crime—like taxes, also on the rise. A backlash is stirring to changes backed by criminal reform efforts in the legislature and on the ballot.

In response to a court order to reduce prison populations, Governor Jerry Brown championed AB 109 in 2011. Under so-called realignment, certain low-level offenders were moved to county jails from state prisons. In many instances, overwhelmed local jailers were forced to release prisoners from their jails to make room.

Along came two ballot measures, Proposition 47 in 2014 and Proposition 57 in 2016, that downgraded a number of felonies to misdemeanors and fast-tracked the parole process for felons convicted of nonviolent crimes.

The combination of laws, however, has the law enforcement community warning of a rise in crime with little ability to curb it. Property thefts, forgeries, frauds, illegal drug use, and more under $950 are labeled a consequence-free crime because few arrested for such crimes serve any time, and perpetrators are aware of the situation.

According to a release from the Association of Los Angeles Deputy Sheriffs, “Prop 47 has created a criminal culture where criminals know they face little, or far lesser, punishment for their crimes. Following the passage of AB 109, nearly 25 percent of jail space that could house criminals serving local sentences for property or violent crime is now occupied by those shifted from state prison to local jails to serve their time.”

Law enforcement officials reveal increases in crime as a result of the new laws, but it is the consequences on the street and in people’s lives that have changed the tone of the conversation. If you’re not convinced, take a look at neighborhood websites with constant chatter about break-ins and suspicious activity and how to set up alarm systems and security cameras.

In Sacramento a growing number of neighborhoods fed up with petty crime pooled money to hire private security for public streets. In the inland empire, vehicle thefts jumped from ninth in the nation to fifth in just one year. In the west San Fernando Valley, gang activity has increased 63 percent in two years. A number of California cities are joining in an effort called Taking Back Our Community, a coalition of local governments dedicated to public education and community advocacy surrounding the unintended adverse public safety impacts of recent changes to California's criminal law.

This surge of activity recalls another time in California history when crime became a major policy and political issue. As noted California historian Kevin Starr wrote in his book, Coast of Dreams, California on the Edge, 1990–2003: “In 1980, California had fewer than 25,000 inmates in a dozen prisons. By January 1998 there were some 154,000 prisoners in 33 prisons.” Californians elected two governors in succession who were tough on crime. Republicans George Deukmejian and Pete Wilson occupied the corner office in the capitol for much of the 1980s and 1990s.

In his first inaugural address in 1983, Deukmejian said, “All the prosperity in the world will not make our society better if our people are threatened by crime. Therefore, it will be the highest priority during my administration to provide all the leadership I can to make California safe again.”

Wilson’s 1994 State of the State Address was one of many to pinpoint the crime issue. He called for get-tough measures against dangerous felons and repeat criminals. He also called for bills that would put three-repeat felons behind bars for good.

But the crime pendulum shifted with Propositions 47 and 57.

In a Sacramento Bee op-ed published a month before the November 2016 election in hopes of stopping Prop 57, which Wilson argued gutted the three-strikes law, he wrote, “The three-strikes initiative approved in 1994 and other sensible crime- control laws prevented millions of Californians from becoming crime victims. It would be gross dereliction of duty to discard laws that have provided us protection of such proven effectiveness.”

This time he was not as persuasive.

But now that the effects of the crime reform initiatives and state laws are being tallied, that pendulum may be moving back again. Will state politics follow?

Certainly California is in a different place today than three and four decades ago, but growing unease can be detected about the tax and crime issues that dominated politics in that era.

Let’s just say that Jerry Brown, rather than Doc Brown, would recognize the modern social-media terminology associated with the taxes and crime in California.

To the cast of players at the intersection of filmdom and politics in California—most prominently, Ronald Reagan and Arnold Schwarzenegger, plus a bevy of screen icons that pour out of the woodwork every presidential election year—add Howard Jarvis, the leader of the Proposition 13 tax revolt. Jarvis’s star turn was a cameo role in the original Airplane! In it, he plays an average joe who hops into a taxi at LAX, only to be stuck curbside for the film’s duration (this was a 1980 film, well before the likes of Uber and Lyft). In fact Jarvis gets the last line in the movie (it’s the headline above) as he waits for his cabbie to return to the car. Jarvis would recall telling the film’s producer, “I’m no actor.” To which the producer replied, “Well, you don’t have to know anything to be an actor.” Some might say the same about some politicians.