Making Hoover History With A Telegram

April 22, 2019 marks the one hundred year anniversary of the founding of the Hoover Institution. 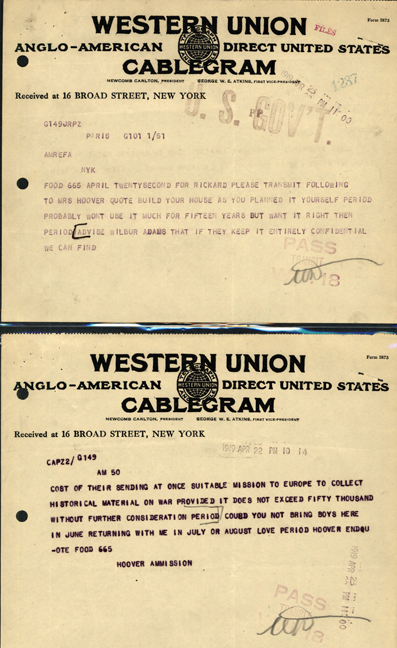 Making Hoover History With A Telegram 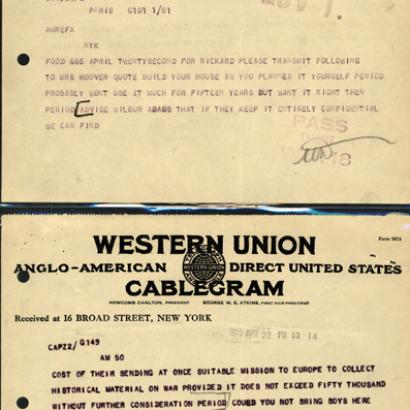 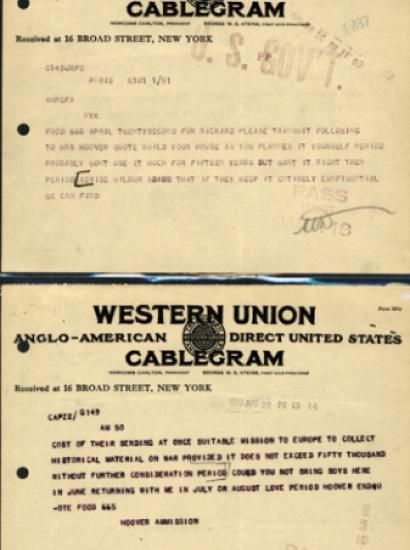 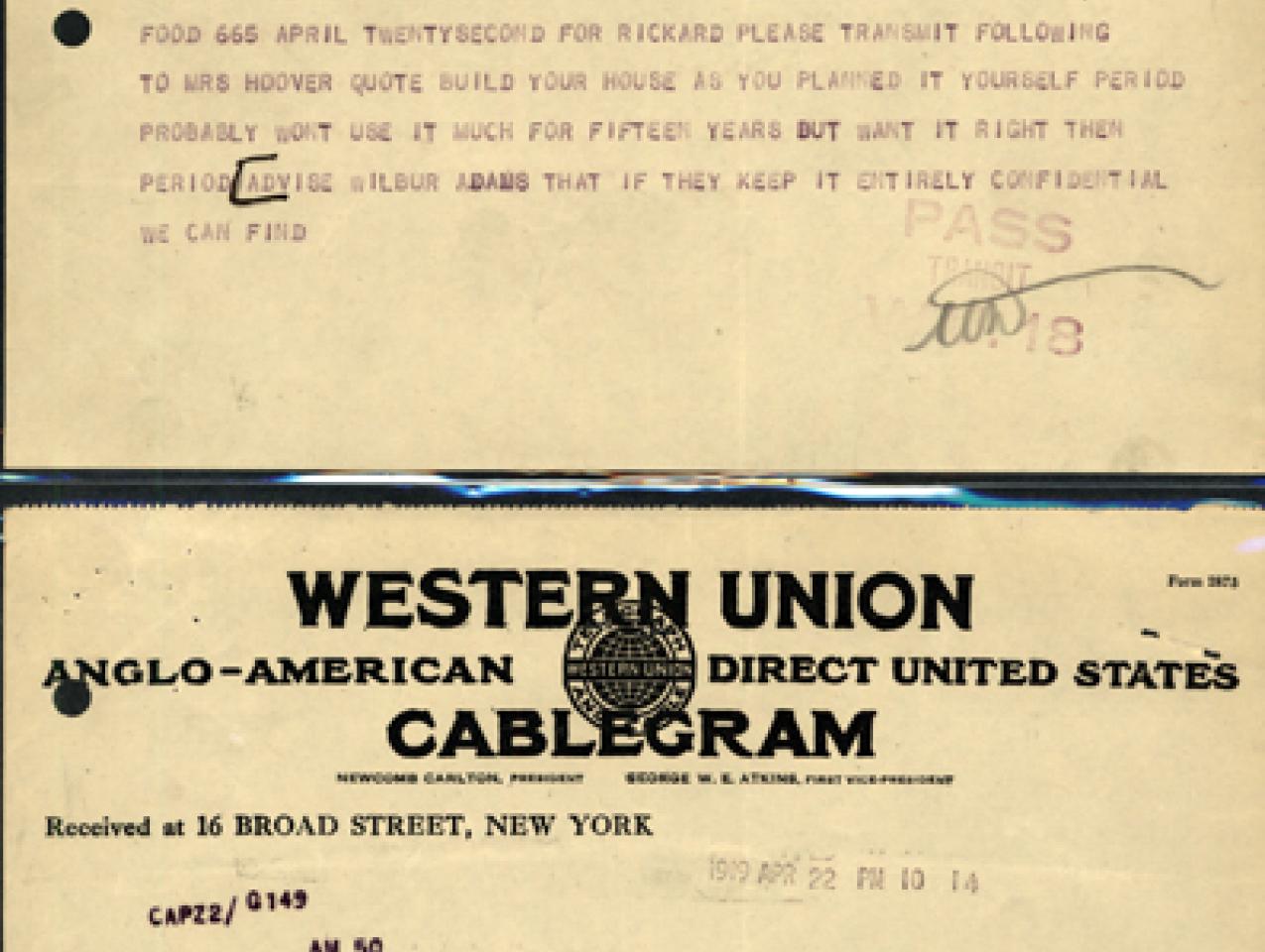 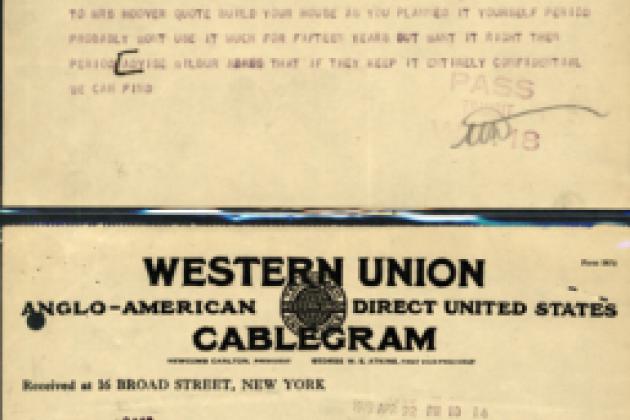 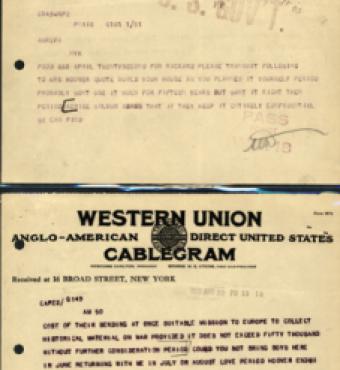 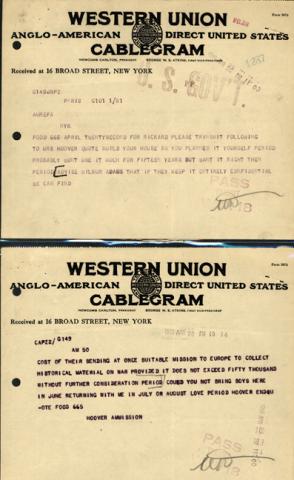 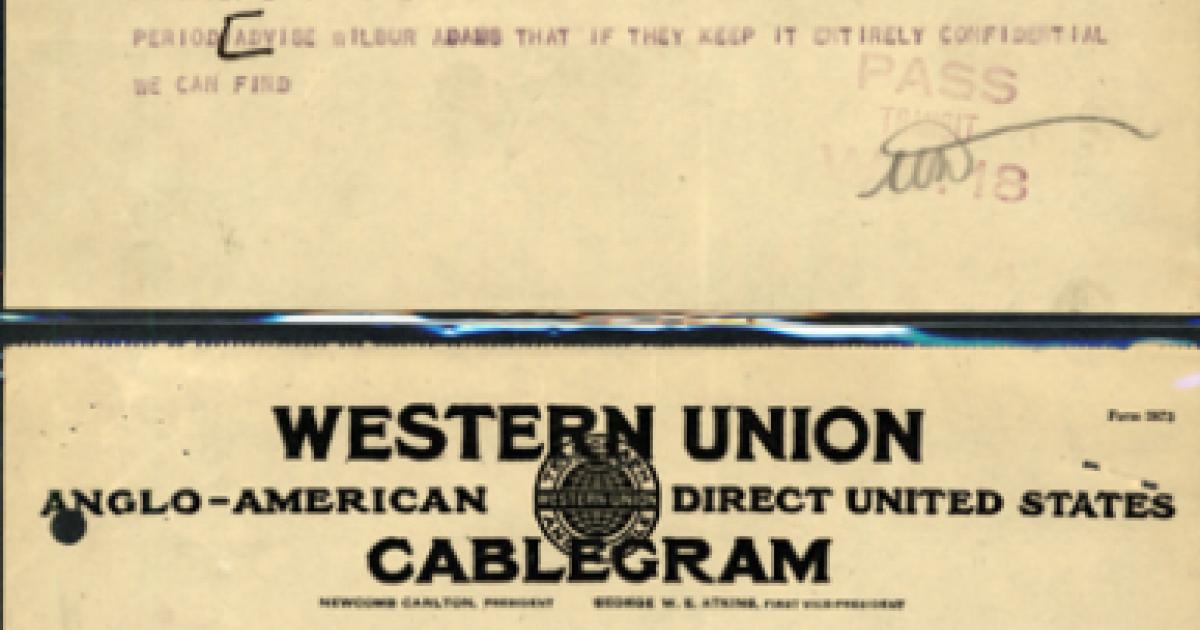 On April 22, 1919, Herbert Hoover sent a telegram from Paris to his wife, Lou Henry Hoover, in Palo Alto, California. This telegram stated, “Advise Wilbur [and] Adams that if they keep it entirely confidential we can find cost of their sending at once suitable mission to Europe to collect historical material on war provided it does not exceed fifty thousand without further consideration.” This grant of $50,000 (the equivalent of $735,000 today) to Stanford University was dedicated to collecting materials from the Great War and preserving them in a separate entity within the university. This announcement from Hoover marks the founding of the institution that would bear his name.

Herbert Hoover later recalled that this prescient idea to preserve contemporary war records for future generations was inspired in part by his having read a few years earlier the comments of Cornell University historian Andrew White, who had collected a personal library while researching the French Revolution, including newspapers, pamphlets, brochures, and other “fugitive publications.” According to his biographer George Nash, Herbert Hoover alone “had the vision, generosity, and will to preserve the raw materials of history for a curious and grateful posterity.” (Herbert Hoover and Stanford University p. 61). Hoover recognized that the Great War occurring all around him was history in the making and that records needed to be actively gathered and archived.
Professors at Stanford (including E. D. Adams, whom Hoover referenced in his message along with Stanford president Ray Lyman Wilbur) were eager to help with the collection, as several of them had previously contacted Hoover during the war years to obtain the archives of the Hoover-led Commission for the Relief of Belgium (CRB). Adams sent a telegram back to Hoover asking if he meant only the records of the CRB. He clarified in in a second telegram, “My idea is simply collect library material on war generally.” Professor Adams set sail for Europe one week later to undertake Hoover’s mission.

While in Europe, Hoover wrote letters to his vast network, imploring friends, acquaintances, and colleagues to assist Stanford University in collecting “historical data on the war for the records.” His name, now highly regarded after the tremendous success of his humanitarian relief efforts with the CRB during the war (which he continued with the American Relief Administration after the war) opened doors for the collectors across borders in Europe. This allowed them to acquire—along with records on food administration—propaganda posters, war records, and more.

Over time the Hoover War Collection grew from housing a small collection of World War I records into the preeminent Hoover Institution on War, Revolution, and Peace (today simply the Hoover Institution), a renowned policy research center dedicated to “ideas defining a free society.” Today marks one hundred years since the founding of the Hoover Institution from one small telegram—a century marked by intellectual breakthroughs and policy innovation. Throughout its history, the institution’s fellows, staff, and supporters have worked together using public policy to address the most important issues of our time, helping promote prosperity, peace, and the exceptional foundational values of the United States. It stands today as the world’s preeminent archive and policy research center dedicated to freedom, private enterprise, and effective, limited government.

Policy innovation and intellectual discoveries marked the Hoover Institution’s first one hundred years, and an even bigger stage is set for a second century of breakthroughs. Hoover’s teams and leadership are prepared to make even greater impact in the years ahead, guiding the country’s policy makers, informing the marketplace of ideas, and illuminating the road to prosperity and peace in America and around the world.

This year, the Hoover Institution celebrates its centennial with events, discussions, and a commemorative exhibition, presented by the Hoover Library & Archives, highlighting the institution’s collections from the past one hundred years. The Hoover centennial exhibition will open in early July in the newly renovated galleries in the first floor of the Hoover Tower. Inspired by the lives of Herbert and Lou Henry Hoover, it will explore the ideals of peace, freedom, and education through a selection of rare documents, posters, photographs, and other historical artifacts.