The Next Battleground in the Terror War

The failed states of Africa might only too easily become a breeding ground for terrorism. It is time for us to make certain that they don’t. By Hoover fellow Lisa D. Cook. 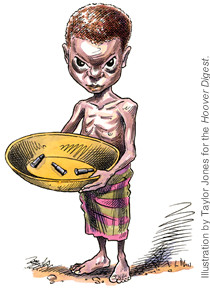 The Next Battleground in the Terror War 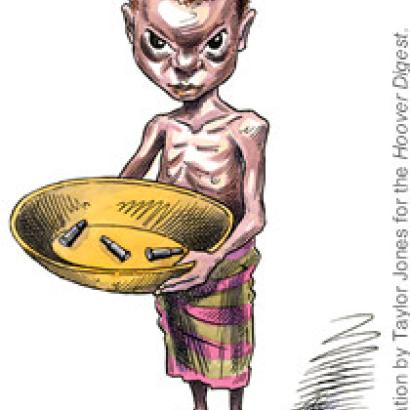 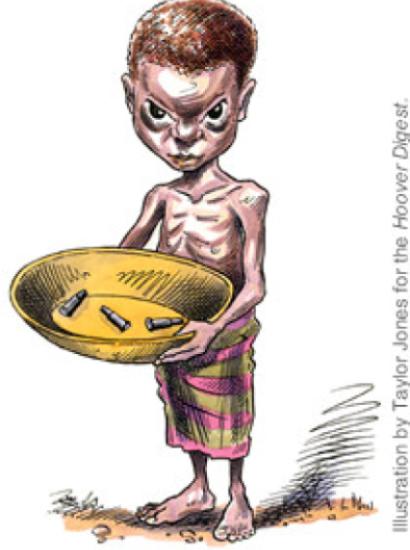 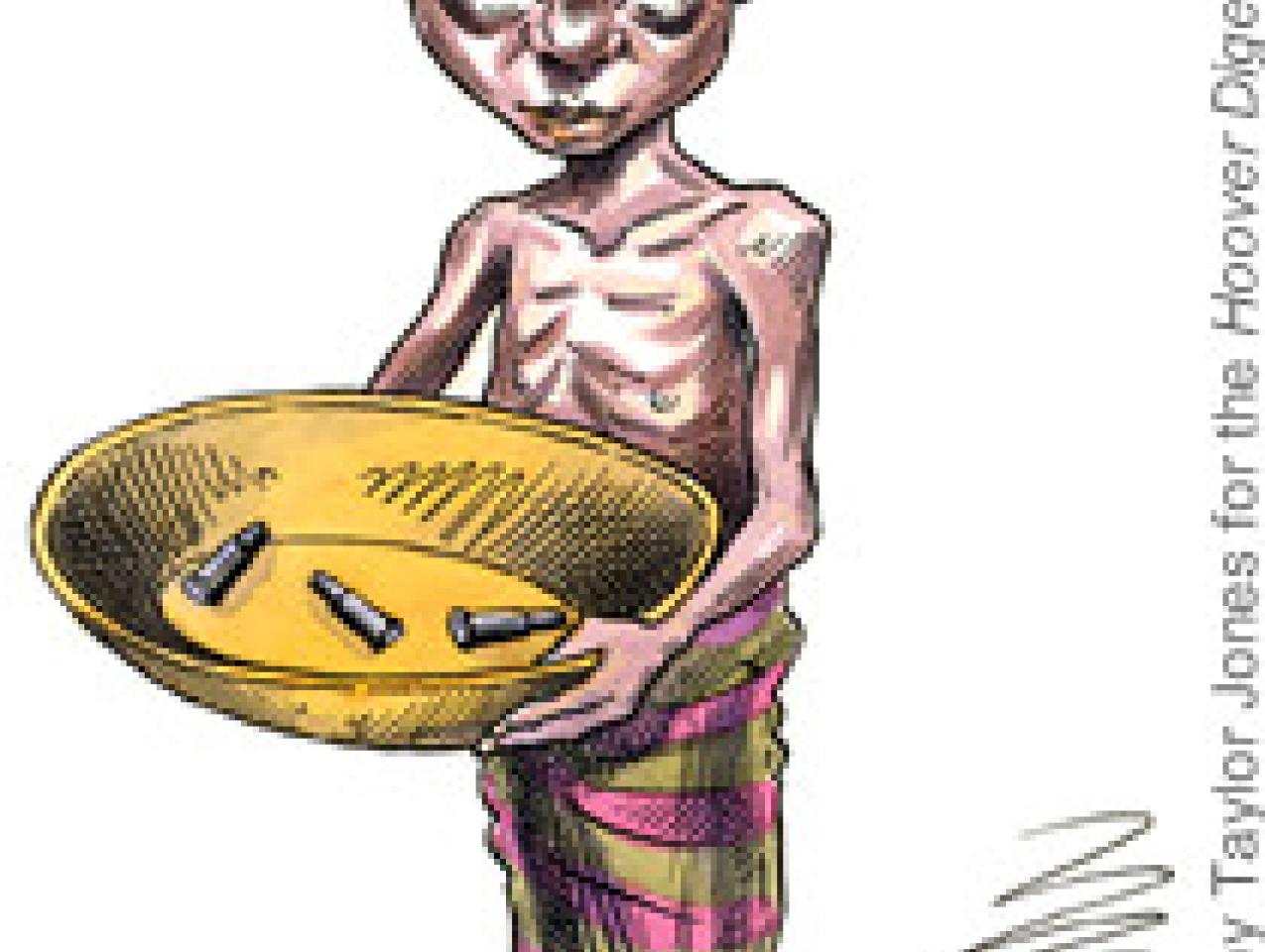 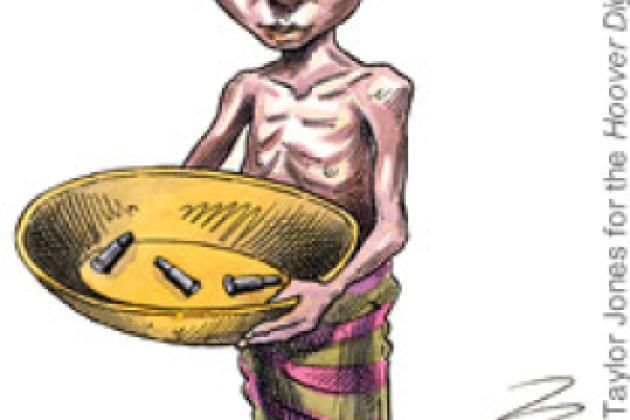 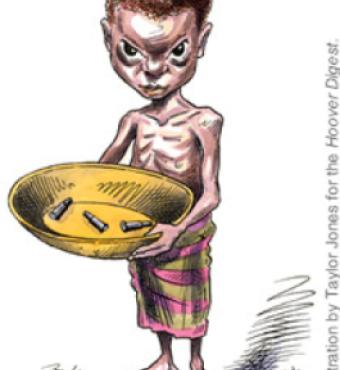 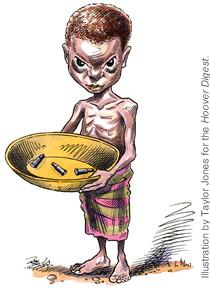 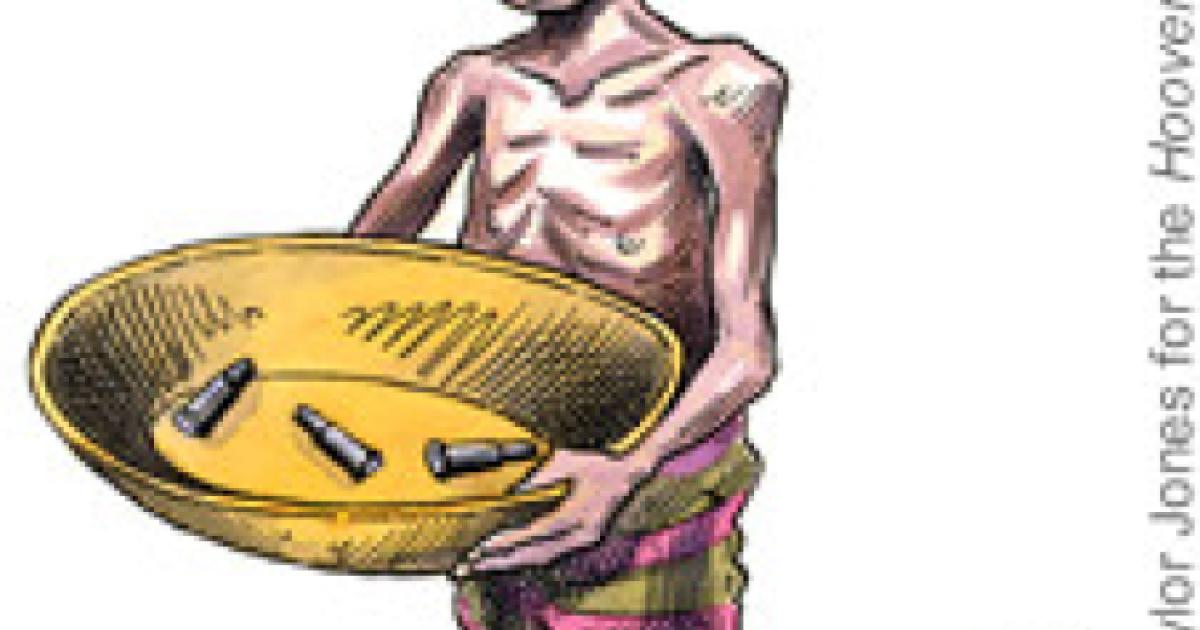 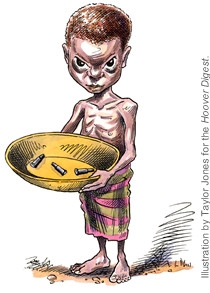 During George W. Bush’s 2000 presidential campaign, Africa was not considered a national security priority for the United States. That changed in November 2002 following two coordinated terrorist attacks against Israeli targets in Mombasa, Kenya. In the first attack, a shoulder-fired missile was fired unsuccessfully at a civilian airliner carrying Israeli tourists; in the second attack, 16 people were killed in the bombing of an Israeli tourist resort.

A recent report prepared for the U.N. Sanctions Committee blamed the Mombasa terrorist incident on four Al Qaeda cells using missiles smuggled through Somalia and money from a Sudanese financier. President Bush has acknowledged that the war on terror must be waged not only on many fronts but on many continents. Noting that parts of Africa have become a “battleground” for terrorists, President Bush affirmed the “growing strategic relationship between the United States and the African continent” during the visit of President Kibaki of Kenya in October.

The implications of the Kenya attacks spread beyond a change in the administration’s Africa policy. The attacks ignited a debate within the national security community on the vulnerability of passenger airlines to surface-to-air missiles and on intelligence-sharing across countries.

Given the long-established pattern in which extremist groups, including Islamic militants, prey on impoverished economies and failed states, Africa seems a natural breeding ground for terrorism. The Bush administration faces an enormous challenge in combating terrorism on the continent. Thus far, the president and his senior Africa policymakers have identified a few important problems and have made notable progress on them. First, the administration is addressing the problem of failed states in Africa and is supporting regional initiatives to do so, as well. There have been public and private diplomatic efforts to bring an end to hostilities in Burundi, the Democratic Republic of Congo (DRC), Sudan, and Liberia.

In Burundi, war between the minority Tutsis, who have traditionally dominated the economy and the military, and the majority Hutus has lasted, at least in this round of internecine bloodletting, nearly 10 years and cost nearly 300,000 lives. In a major development in November, the largest rebel group and the government signed a new peace accord, which was brokered by President Thabo Mbeki of South Africa and was supported by the Bush administration.

The war in the DRC lasted five years and was dubbed “Africa’s world war” because it involved troops from nine countries and caused an estimated 3.3 to 4.1 million deaths. The war ended with a peace agreement with rebels in 2003 with the encouragement of the Bush White House. President Bush has met President Joseph Kabila four times in the last two years, and the United States has pledged humanitarian assistance and further support for the peace agreement.

Sudan, whose civil war has lasted 36 of its 47 years, making it Africa’s longest-running war, is the former home of Osama bin Laden and appeared early on the administration’s policy agenda. Former senator John Danforth, who was named special envoy to Sudan shortly after Bush took office in 2001, has been actively engaged in the peace process. A number of observers believe that the current round of peace talks is the most promising of the past two decades.

The Bush administration has also aided in the cessation of hostilities in Liberia, both through its own initiatives and through its support of the efforts of regional leaders in promoting peace. Second, significant resources have been expended in fighting terror directly in Africa. One example is the Safe Skies for Africa initiative, which was established to make travel in sub-Saharan Africa more secure. The program was begun in 1998 and has since been expanded by the Bush administration. Under the program, interagency specialists from the U.S. government have conducted aviation security and safety assessments throughout the region. A new plan pledging $100 million to support security and counter-terrorist efforts in Tanzania, Kenya, Ethiopia, Uganda, and Djibouti was unveiled last July. There has also been an increased U.S. military presence on the continent. U.S. military personnel have been stationed in Kenya, and a number of American troops and the USS Mount

Whitney, command central for regional counter-terrorist activity, are stationed in Djibouti. Yemen and Somalia are Djibouti’s neighbors, and terror cells are known to have operated in both countries in the past.

One of Africa’s greatest problems is that it receives such fleeting attention from the United States. Occasional interest emerges when the latest vicious civil war, crippling natural disaster, or large-scale humanitarian crisis erupts on the continent, but this interest is generally fleeting. A partial remedy is simply greater press coverage and more attention from policymakers. Last July, President Bush visited Uganda, Nigeria, South Africa, Senegal, and Botswana and met with their leaders about terrorism, HIV/AIDS, and economic development. His visit brought much-needed attention to the challenges facing the continent. Other senior administration officials, including Colin Powell, Donald Rumsfeld, and Tommy Thompson, have made visits that have likewise focused attention on the continent’s problems.

Thus far, the administration’s peacemaking efforts have helped reduce the level of warfare on the continent, which may be its greatest success in the war on terror in Africa. Yet despite a few successes in battle, the war on terror has not been won in Africa. According to the U.N. report cited above, the terrorists involved in the Mombasa attacks have moved freely between Somalia and Kenya, and an unknown number remain at large. The war against terror still requires bold moves and thinking. As in Afghanistan, a multifaceted approach is needed in Africa to minimize the international terrorist threat over the short and long term.

Such an approach should involve four steps. First, bringing stability to countries is one thing, but making democracy work in them is quite another. Beyond supporting democratic processes and institutions, the United States should reward leaders who are responsive to the needs of their citizens and place pressure on those who are not. One leader who should be singled out for praise is Nigerian president Obasanjo, who has been a steady ally of the administration against terrorism and has worked closely with nongovernmental agencies on measures to stem the spread of HIV and to confront poverty.

Second, reducing poverty and building sustainable economies throughout Africa are of critical importance. Underdeveloped and dysfunctional economies breed poverty and are prime breeding grounds for terrorists. The United States should play a role in helping expand the capacity of African economies.

Two important initiatives, among others, offer promise. The Bush administration has extended and promoted programs such as the African Growth and Opportunity Act, which has been relatively successful in promoting trade with Africa. But the schedule for making more manufactured products from Africa available to American consumers needs to be speeded up. A new proposal, the Millennium Challenge Account (MCA), seeks to link foreign assistance with economic and development performance indicators and would nearly double the amount of bilateral assistance to poor countries to $5 billion annually by 2006, the largest increase in recent memory. However, the MCA will be administered by a new agency that will likely compete with preexisting infrastructure for delivering aid to poor countries with respect to policy and aid programs, particularly those already administered by the U.S. Agency for International Development (USAID). Careful design and implementation of the new fund would be required to minimize this potentially large problem in the program’s early stages. The administration will also need to work harder to obtain funding at desired levels from Congress, since it slashed the proposed MCA budget for 2004 by 25 percent in November.

Third, HIV/AIDS and other infectious diseases are having a devastating effect on African economies, armies, and societies, all of which will be needed as combatants in the war on terror. In his 2003 State of the Union address, President Bush asked Congress to budget $10 billion in new money and $5 billion in already allocated assistance over five years to provide AIDS drugs to 2 million Africans, help prevent 7 million new infections, and care for those infected with the virus through new bilateral programs. The Bush White House has also aided in the design, funding, and implementation of the Global Fund to Fight AIDS, Tuberculosis, and Malaria program, which is a multilateral effort started in 2001. These are positive developments but challenges remain. Tension over the use of bilateral (U.S. only) or multilateral (U.S. and other countries) programs has arisen between Congress, whose members favor the Global Fund, and the Bush administration, which favors the bilateral initiative. In 2003, more than 9,000 new HIV infections and 6,000 AIDS-related deaths per day were reported in sub-Saharan Africa alone; any such distraction between branches of government could result in delays that threaten countless lives that could be saved or prolonged by U.S. assistance. Further, pressure should be exerted on the rest of the developed world to do more to stem the spread of HIV, particularly by means of donations to the Global Fund. The United States must act first by more closely matching pledges to payments to the Fund, which will encourage other countries to do so.

Finally, all the aforementioned peace talks and agreements encouraged and supported by the administration are fragile. Beyond needing American help in establishing peace, these countries require immense resources to enforce and sustain peace. The DRC, for instance, has been sent only 10,800 U.N. peacekeepers, which is woefully inadequate for a country nearly one-quarter the size of the United States with a population of 55 million. Simply put, more resources need to be poured in to maintain the peace in the DRC.

Africa is a critical national security concern for the United States—and not simply because we import 18 percent of our oil from the continent. As we have learned all too well, terrorism bred in distant failed states can eventually make its way back to us and to our allies. It is time to take Africa’s problems seriously.

Special to the Hoover Digest. Available from the Hoover Press is Prospects for Democratic Development in Africa, by Larry Diamond, part of the Hoover Essays in Public Policy series. To order, call 800.935.2882.