A Nobel for Humanity

Economist Angus Deaton says that ‘life is better now than at almost any time in history.’ 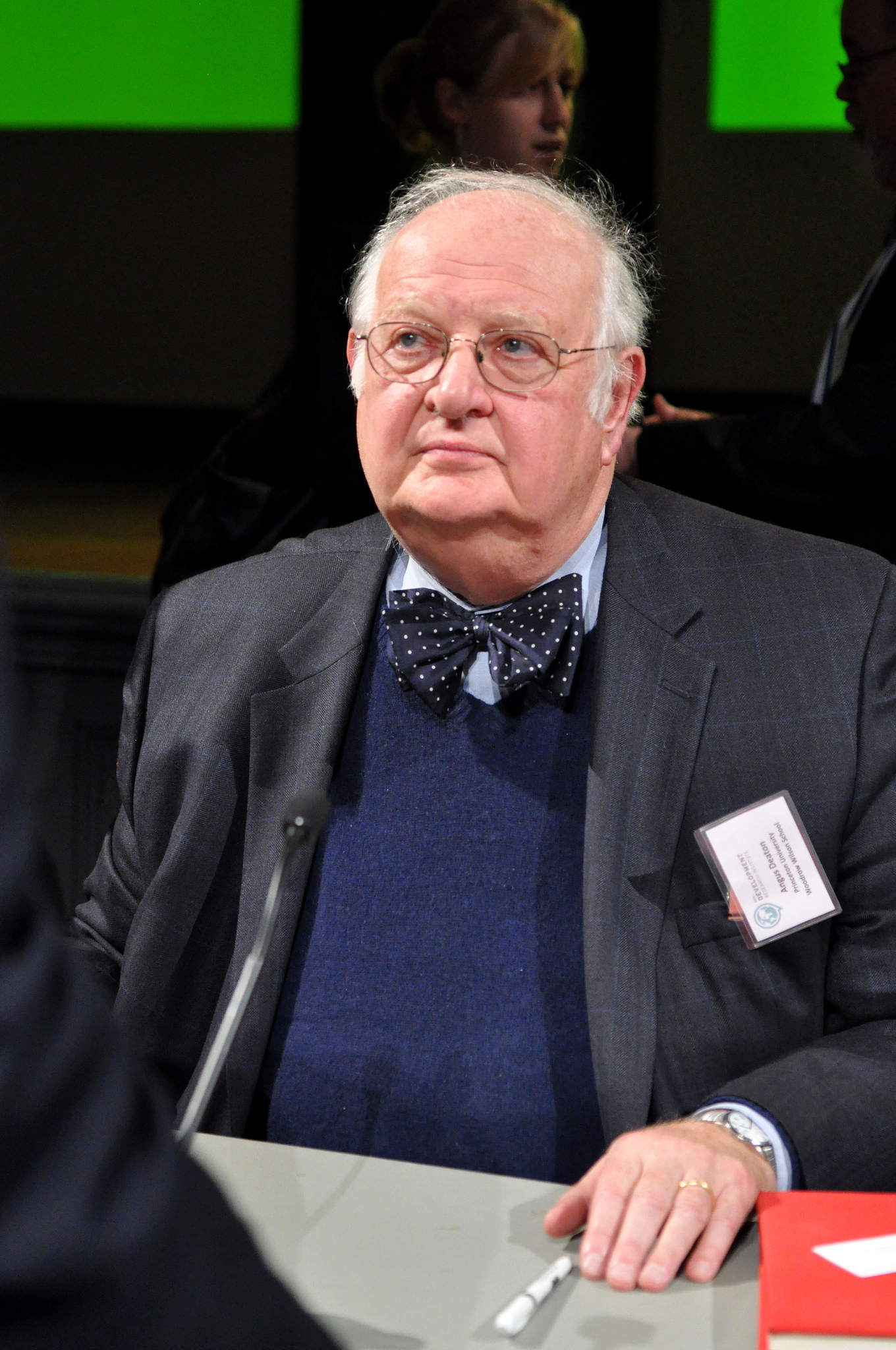 A Nobel for Humanity 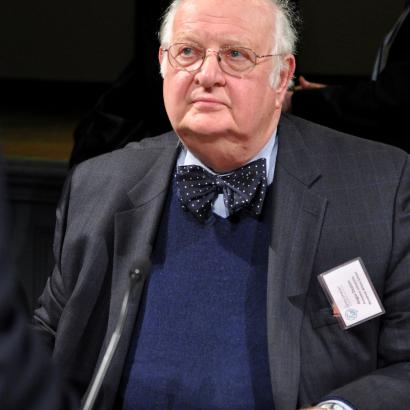 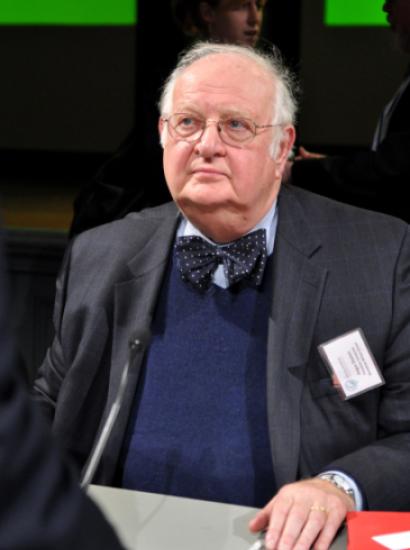 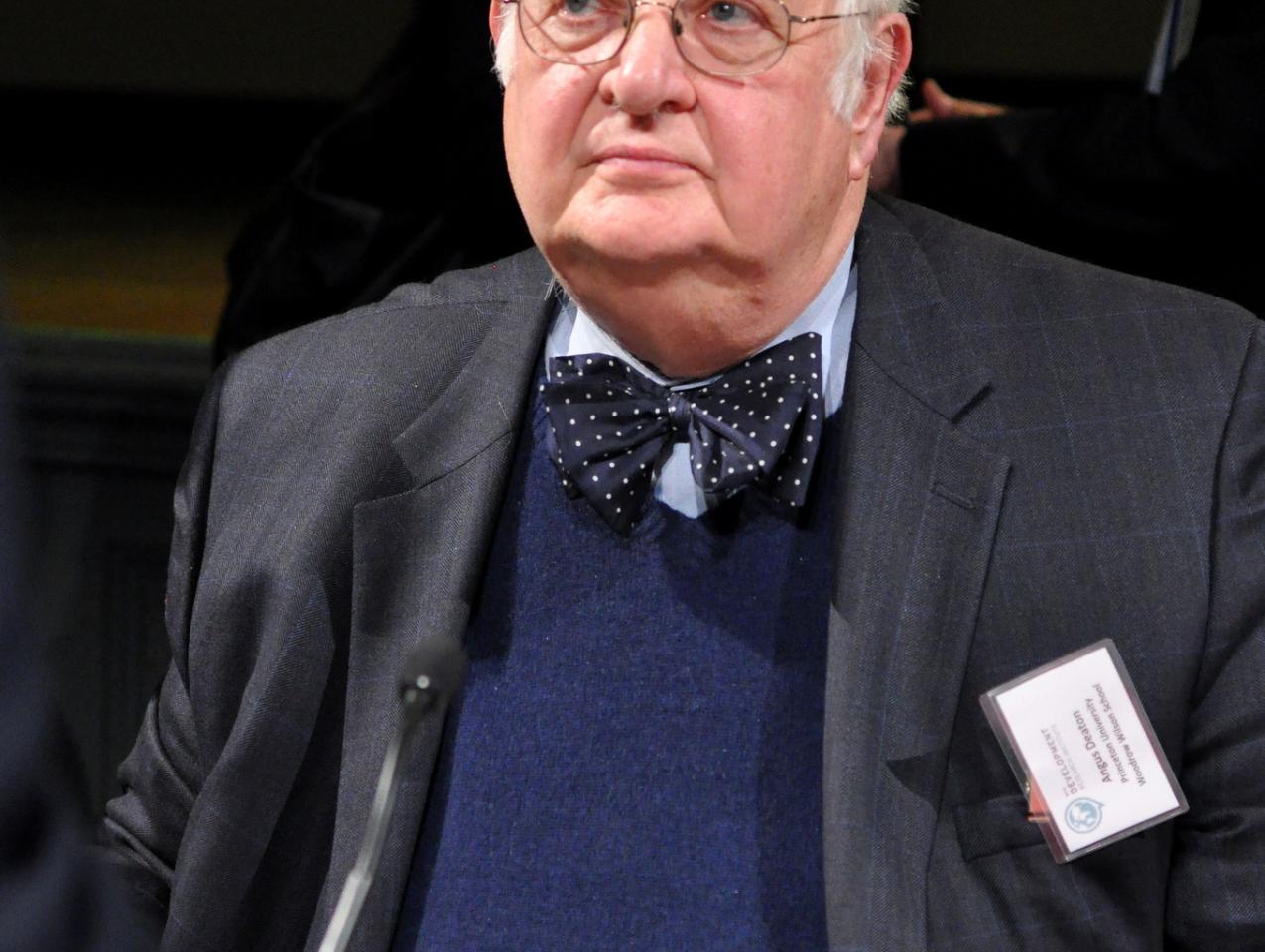 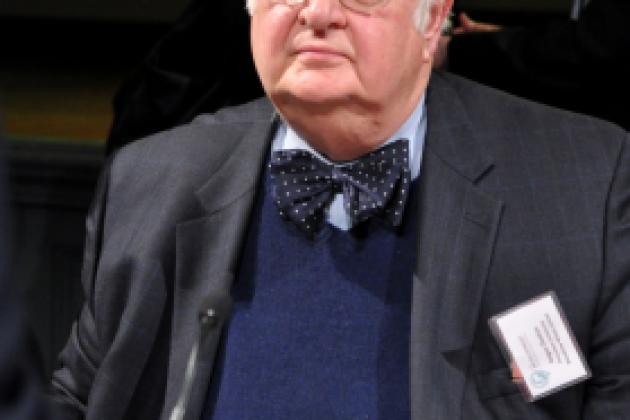 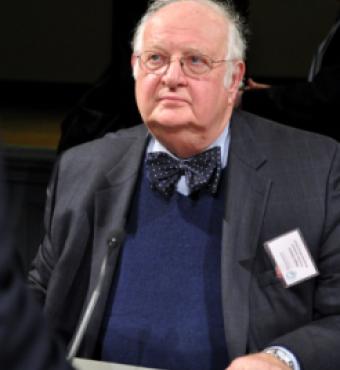 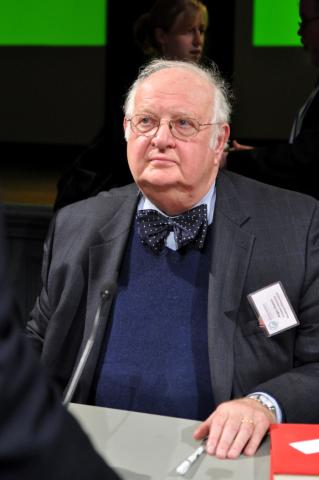 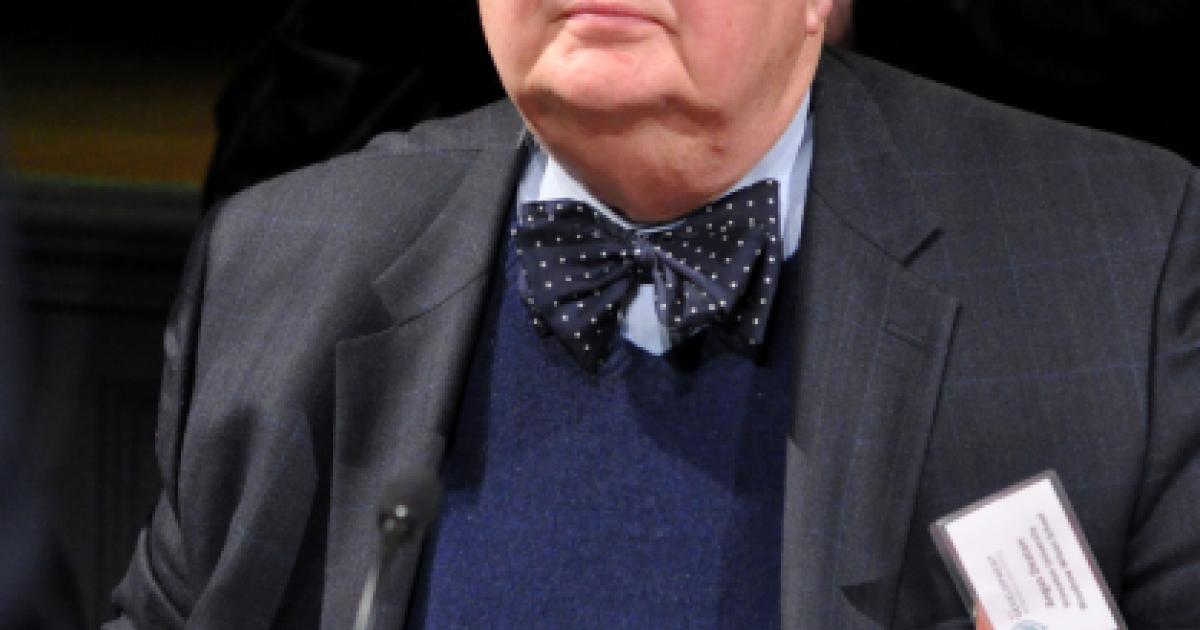 On Tuesday, the Royal Swedish Academy of Sciences announced its award of the Nobel Prize in economics to Scottish-born economist Angus Deaton. Deaton, who is both a British and a U.S. citizen, is a Princeton University Professor of Economics and International Affairs.

The Nobel Committee gave the award for Deaton’s “analysis of consumption, poverty, and welfare.” That’s accurate, but the Committee doesn’t tell you anywhere on its web site why so much of his work matters. Judged simply as a technical economist who made big theoretical and empirical breakthroughs, Deaton deserves the Nobel Prize. But what is missing from all of the entries on the Committee’s web site, unless you know how to read between the lines, is the significance of his work for humanity.

Two of Deaton’s biggest contributions were his work on index numbers and on purchasing power parity comparisons. His contributions matter because he used these tools to measure world poverty and world progress.

Here’s the good news from Deaton’s work: World poverty has fallen like a rock and will likely fall further; life expectancy has increased dramatically and will likely increase further; and higher wealth makes you somewhat happier. If you want to understand Angus Deaton’s thinking, read his 2013 book, The Great Escape. Or, if you are more of a listener, I recommend Hoover fellow Russ Roberts’ one-hour Econtalk conversation with Deaton about the book.

“Life is better now than at almost any time in history. More people are richer and fewer people live in dire poverty. Lives are longer and parents no longer routinely watch a quarter of their children die. Yet millions still experience the horrors of destitution and of premature death. The world is hugely unequal.”

That is the opening paragraph of The Great Escape. Deaton’s own book shows that you could delete the word “almost” from the first sentence. By the standards of poverty, life expectancy, and overall wellbeing, there has never been a better time in history. What is behind this huge improvement in people’s lives? In the 19th century, an important factor in economic growth and the decline of poverty was the Industrial Revolution. In the early 20th century, Deaton notes, cleaning up water supplies, extending vaccinations, and applying germ theory were important. Regarding germ theory, Deaton points out that it wasn’t until the early 20th century that hotels changed sheets between guests, making it harder for disease to spread.

One graph in Deaton’s book, which he took from demographer Samuel Preston and updated, is worth a thousand words. I’ll summarize it in less than one hundred. Countries with the highest per capita income have, by and large, the highest life expectancy. The “hinge point” beyond which that relationship flattens is at about $8,000 per capita in 2005 U.S. dollars. Below that income, “infectious diseases are important causes of . . . many of the deaths . . . among children, so that in the poorest countries, about half of all deaths are of children under the age of 5.” For higher incomes, child deaths are fairly rare, and “most deaths are of old people who die not from infectious disease but from chronic diseases.”

The same chart shows another devastating effect—that of Chairman Mao’s manmade famine. In 1958, life expectancy in China was nearly 50; by 1960, Mao, with his ruthless collectivist policies, had chopped it to less than 30! Five years later, “once Mao had stopped killing people,” it had risen to nearly 55. I highlight this for two reasons: (1) to point out what a moral monster Mao was, and (2) to credit Angus Deaton for not mincing words about Mao. You might think that this latter takes no courage. But I assure you, having been in academia a while, that although Mao’s slaughter is well-documented, it’s not common for academics, even ones who know the facts about Mao, to point out that he was a mass murderer. I recommend also that you watch this short interview of Deaton done by the Financial Times two years ago, and watch how, after Deaton calmly calls Mao out for his killing, the interviewer quickly changes topics. (It happens around the 3:10 mark.)

Deaton is a strong critic of foreign aid. In his book, he points out that between 1960 and 2010, governments of rich countries gave about $5 trillion to governments of poor countries, and the results were approximately zero. Why is that? Deaton argues that governments of those receiving countries had very little incentive to help their own people with that aid. Instead, because the man who pays the piper calls the tune, those governments responded to the political wishes of the donor governments.

In The Great Escape, Deaton does some interesting calculations on foreign aid. He points out in 2008, there were 800 million people living on less than a dollar a day. Getting their income up to $1.00 a day in their purchasing power [$1.00 of ours, he computes, translates into $2.50 in purchasing power in those countries] would bring them out of extreme poverty. If all the adults in America, Britain, France, Germany and Japan gave 15 cents a day, he computes, we could eliminate world poverty.

But before you reach for your checkbook, Deaton would have you think through the main problem with this approach, which he calls the “hydraulic approach.” Explaining the use of the word “hydraulic,” Deaton writes: “[I]f water is pumped in at one end, water must pour out of the other end. Fixing world poverty and saving the lives of dying children is seen as an engineering problem, like fixing the plumbing or repairing a broken car. “

What’s his problem with the hydraulic approach? It ignores the fact that to really help those countries, we need them to get their institutions right, or, at least, roughly right. Deaton writes: “Innovators need to be free from the risk of expropriation, functioning law courts are needed to settle disputes and protect patents, and tax rates cannot be too high. When all of these conditions come together— as they have in the United States for a century and a half— we get sustained economic growth and higher living standards.”

Government-to-government foreign aid does nothing to help these things happen and, indeed, almost certainly makes governance in those countries worse. I certainly don’t blame, though, and, indeed, I applaud, people who use their own money to help poor people in Africa and Asia. But here’s what I find striking. Some serious economists have computed that relaxing immigration restrictions would create large gains for people in the receiving countries and, more important in this context, even larger gains for immigrants. You don’t have to be an “open borders” advocate to realize that increasing immigration, with residency requirements for receiving welfare and getting to vote, would make a big dent in world poverty.

Economists have been on average much more positively disposed to immigration than the average American. Yet Deaton says nothing about loosening immigration restrictions as an effective means to reduce world poverty. Moreover, a search on his semi-annual Letters from America, in which he has commented on American public policy since 1996, yields exactly zero references to immigration.

Deaton worries, much more than I do, about the increasing wealth inequality in the United States. He writes “To worry about these consequences of extreme inequality has nothing to do with being envious of the rich and everything to with the fear that rapidly growing top incomes are a threat to the wellbeing of everyone else.” What are these consequences?

He writes: “The very wealthy have little need for state-provided education or health care; they have every reason to support cuts in Medicare and to fight any increases in taxes. They have even less reason to support health insurance for everyone, or to worry about the low quality of public schools that plagues much of the country. They will oppose any regulation of banks that restricts profits, even if it helps those who cannot cover their mortgages or protects the public against predatory lending, deceptive advertising, or even a repetition of the financial crisis.

Interestingly, though, Deaton gives no evidence that these are the concerns of the rich. I bet he would be surprised to know that according to exit polling data from 2006, 47 percent of those earning $100,000 or more voted Democrat and 52 percent voted Republican. That’s not a large margin. What about the superrich? For every Charles Koch, there’s a George Soros. Moreover, it’s hard to see how raising marginal tax rates to, say, 60%, or imposing a wealth tax of, say, one percent annually would do much to change the voting patterns of “the rich.” The reality is that polling data show that high-income and wealthy people, like most voters, don’t generally vote their pocketbook. Instead, they vote their beliefs.

Deaton may think he has evidence. He writes: “Studies of congressional voting by the political scientists Larry Bartels and Martin Gilens have documented how votes in Congress from both sides of the aisle are sensitive to the wishes of rich constituents and not at all to the wishes of poor constituents.”

But it doesn’t follow that members of Congress cater to the narrow economic interests of the rich. To take one example, higher-income people tend to be more pro-free trade than lower-income people and Congressional votes reflect this preference. But in percentage terms, the biggest beneficiaries of the cheaper clothing, food, and fuel made possibly by free trade are the relatively low-income people.

All in all, though, I second the Nobel Committee’s fine choice of Deaton as this year’s Nobel Prize winner.