While strong recoveries sometimes follow deep recessions, historically recoveries following financial crises have been slow and painful. The specter of massive future tax hikes and inflation is worsening the outlook. We need a better, more coherent policy path back to a strong market economy—not to a European style social-welfare state, permanent government lifelines and stagflation.

The last time we had a comparable economic crisis—the double-digit inflation, 20% interest rates, near 11% unemployment, and even larger inflation-adjusted stock market decline of the late 1970s and early ’80s—a new policy path was charted consisting of low tax rates, sound money, slower spending growth, free trade and less intrusive regulation. Those policies pulled us out of stagflation and led to a quarter-century of growth. Moving so far in the exact opposite direction invites eventual disaster for American workers and firms.

Half a year and two million lost jobs since the stimulus bill was passed, less than 10% of the funds have been disbursed and what has been been saved, not spent, by consumers. Out of the $320 billion increase in personal disposable income, some from the increased transfer payments in the stimulus bill, personal consumption outlays have risen only $1 billion. That’s far short of President Barack Obama’s promised “immediate” help. Nor has there been the promised “multiplier” on every stimulus dollar spent. Infrastructure spending in the pipeline will likely deliver more than this, but a lot less than advertised. Score the stimulus a very expensive, tragically wasted opportunity.

Pressure is building from the left for a second stimulus program. That would make the $787 billion stimulus bill one of the most expensive mulligans in history. We should be wary of expensive additional fiscal stimulus. Unless it consists of the permanent tax rate cuts that history teaches are most effective and is accompanied by real future spending cuts, such a stimulus is unlikely to decrease unemployment much.

The administration and Congress are exploiting a crisis atmosphere to promote a breathtakingly expensive big-government spending agenda mostly to be paid for later. The trillions of dollars of deficits will eventually force much higher income or payroll taxes, or a national value-added tax similar to those in Europe, or severe inflation. Balancing the CBO-projected out-year budget would require a 44% increase in everyone’s income taxes. The anticipation of, and uncertainty over, those future taxes and debt are factors constraining consumption and investment. That is delaying recovery now.

Most families respond not just to current taxes, but also to expectations of higher future taxes, by saving. Likewise, business-investment decisions respond to expectations of taxes affecting the cost of capital. For example, long-term interest rates have risen considerably since year-end, despite massive Fed purchases of long-term Treasurys and other assets, as bondholders from Boston to Beijing contemplate $10 trillion of added federal debt crowding out other borrowers and risking inflation.

In my home state of California, the tax hikes currently being proposed by Mr. Obama and House Democrats would drive marginal tax rates on earnings to among the world’s highest at 57% (60% or more if Mr. Obama follows through on his campaign proposal to partially uncap Social Security taxes). That’s a debilitating destruction of incentives for our most productive small businesses and citizens. Democrats also plan to hugely increase the tax rate on dividends and capital gains. And that’s before Rep. Charlie Rangel’s (D., N.Y.) proposed health-care payroll taxes on anyone making more than $280,000 a year. And before dealing with the long-run entitlement costs crisis, i.e., Medicare, Medicaid and Social Security.

Given these sobering facts, what should Mr. Obama do? On the budget and spending, he should try pilot programs to test his ideas. If they work at sensible cost, he will get broad support to expand them. The health-care bill should be refocused on leveling the tax-subsidy playing field so individuals can purchase low-cost, high-deductible, catastrophic insurance. The costly climate change bill (which Mr. Obama’s own EPA administrator admitted would have virtually no impact on the climate) should be scrapped in favor of a broad-based, transparent carbon tax, energy-efficiency initiatives, and the much needed expansion of our domestic oil and gas production.

The Obama administration’s financial-reform policies contain laudable features, unanswered questions, and lurking dangers. Laudable: a derivatives-netting clearinghouse, more trading on exchanges, closing loopholes. Unanswered: an end game for Fannie Mae and Freddie Mac as well as a clear policy for institutions deemed “too big to fail” (such a policy should be centered on capital ratios rising with size, debt conversion to equity, and a higher government bailout bar, all to decrease the need for future bailouts). Lurking: the Fed as systemic risk regulator and Treasury Secretary Timothy Geithner’s toxic asset bet.

Independent monetary policy is essential to control inflation, and it would be compromised by the threat of congressional retaliation if the Fed shut down Fannie and Freddie after Congress refused to do so; or if the Fed too aggressively demanded that the president and Congress stop their spending, tax and debt policies when they become, as now, the largest systemic risk to the economy. In the 1970s, Fed Chairman Arthur Burns exhorted Congress to control the deficit while pumping up the money supply and igniting inflation. 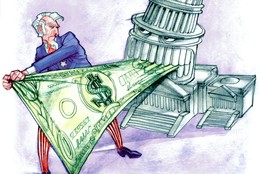 Treasury is risking a Japanese-style lost decade with its bet that time and profitability will suffice to enable financial firms to work down their toxic assets, as in the 1980s Latin American debt crisis. But if the losses are so large that subsidized zombie institutions will severely damage unsubsidized, healthy, competing ones, more rapid closures and mergers will be required. That was our rationale in the early ’90s for quickly closing 1,000 S&Ls with the Resolution Trust Corporation.

The Fed’s unprecedented expansion of its balance sheet with numerous programs to repair credit did help put a floor under the crisis. The Fed now needs to clarify the intended future use of its lender-of-last-resort responsibilities. It should exit its long-term Treasury purchases to signal it has no intention of monetizing government debt. It must forestall future inflation by reversing its immense liquidity injections and ending its selective credit allocation as soon and predictably as feasible after the downturn is mitigated. While this is Fed Chairman Ben Bernanke’s intention, it is a tricky maneuver that has beguiled the Fed in the past. The failure to raise interest rates soon and rapidly enough earlier in the decade contributed to this mess.

These suggested monetary, fiscal and regulatory policy adjustments would immediately improve short-run and long-run economic prospects. Households would realize that they don’t have to save to pay massive future tax hikes and businesses would have more predictable, less costly access to private capital.

Mr. Obama should ignore the pressure from the left of his party and the economically illiterate Beltway pundits scoring short-term political wins and losses. He should recall that the Clinton presidency was saved from itself by the defeat of HillaryCare and its big spending agenda. It would be wildly popular as well as prudent for Mr. Obama to pivot to a more centrist policy program to prevent permanent, irreversible economic damage.

Mr. Boskin, professor of economics at Stanford University and senior fellow at the Hoover Institution, was chairman of the Council of Economic Advisers under President George H. W. Bush.