Obama could help markets by changing his tune on tax hikes and protectionism.

With their economies in recession and a credit crunch steepening the slide, policy makers around the world race to contain the damage. Calls for expansion of government spending, taxes and regulation, even for radical revision of our economic system, an end to capitalism, are rampant. 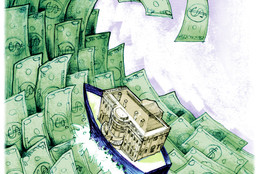 The response to those calls will be shaped to an unusual degree by the next president, given the big spending, high tax, regulatory agenda of the Democratic majorities in Congress. Presidents, with occasional exceptions, accommodate a Congress controlled by their party (George W. Bush) and only triangulate to the center when the opposition controls it (Bill Clinton).

The next few years will determine whether currently contemplated policy changes round off what their proponents view as the rough edges of the Reagan revolution and capitalism, or are a bridge to more radical re-engineering of the economy. If the latter, the eventual economic costs of permanently lower living standards -- 30% lower at European levels of taxes, spending and regulation -- would be far greater than those caused by even a severe recession.

The best that can be done now is to limit the damage. Banks won't expand their lending into a recession, but they can slow their natural lending contraction. Moreover, the recent dramatic government interventions in the economy carry three long-run costs that must be minimized: the direct financial costs of the interventions, a first step toward which would be made by letting unhealthy, nonsystemically important institutions fail; the greater moral hazard from the bailouts, the guarantees, the expanded deposit insurance, that increase the likelihood of future crises; and the potential bridging to, and misguided justification of, more permanent expansions of government in the economy.

The next president and Treasury secretary should make clear their intention to exit their new interventionist role in favor of private capital, and that the revenues from premiums, dividends, asset sales and profits on investments will not be used to fund pet projects and new initiatives. We must not sow the seeds of what will be, a decade on, the next government social engineering fiasco, with regulation, mandates, subsidies, taxes and spending.

Unfortunately, the same political forces that socially engineered a disastrous mortgage market now have other industries in their sights: pharmaceuticals, health care, energy.Barack Obama enthusiastically endorses such policies; John McCain less so. The big risks are higher taxes, protectionism, regulatory micromanagement, vast new spending, subsidies and mandates. Recall that the stock market crash of 1929, and the ensuing recession, were turned into the Great Depression by tax increases and protectionism (and bad monetary policy).

We do need policies to restore confidence in our fiscal and financial future. These include controlling future government entitlement spending to prevent sliding into a social welfare state; keeping tax rates as low as possible; promoting an open, rules-based trading system; reforming financial regulation for comprehensive and rapid disclosure, oversight, and capital adequacy monitoring. We do not need a regulatory morass that will stifle innovation.

All of this will be doubly difficult in the current economic and political environment. Mr. McCain's proposals might stall in a Democratic Congress, but at least are mostly consistent with sound economics. Mr. Obama's are less so.

For example, the Obama tax plan calls for large tax increases, including raising rates on dividends and capital gains to 20% from 15%. This will make it harder for financial firms to raise private capital, and force greater reliance on public capital. Worse, his refundable tax credits will raise the share of those making no contribution to the funding of general government to 48% from 38%, hastening, perhaps cementing, the unhealthy budgetary dynamic of a majority of voters receiving more in public payments than they pay in taxes.

While Mr. McCain proposes serious spending control, achieving it would not be easy. Mr. Obama says he'll go through the budget line by line, yet proposes large increases in social spending, paid for by an assumed Iraq peace dividend. President Clinton decreased military spending rapidly (38% as a percentage of GDP), leaving major holes in our military. It's still a dangerous world; we should not repeat that mistake. Mr. Obama's Social Security proposal is to turn to taxes first and rule out even a small increase in retirement age, no matter how much life expectancy increases.

Mr. Obama's professed protectionism during the primaries has been softened, as have his most extreme tax positions. But if elected, he could help restore confidence in the global economy by repudiating his more wild ideas, such as unilaterally renegotiating the North American Free Trade Agreement, and by making substantive proposals such as expanding Nafta to the European Union. Saying he is not a protectionist is not enough; nor is saying he is cutting taxes by counting spending increases as tax cuts. He could help financial markets and the economy by pledging to delay any tax hikes until the economy is healthy and to veto any additional ones from Congress.

Capitalism has been history's greatest force for wealth creation, economic opportunity and improvement in the human condition. It doesn't come with guarantees against busts as well as booms, although better policy can limit the swings. For those who think the current financial crisis is primarily due to our limited government, consider that mixed economies with a bigger government presence, such as the U.K. and France, have their own burst housing bubbles and recessions. The Japanese government's micromanagement of its financial system didn't prevent a financial crisis at the end of its real-estate bubble.

For those who blame deregulation, it was free-market types who tried to rein in Fannie and Freddie; it was the independent investment banks, not those inside commercial banks, that failed, and failed in inverse order of their leverage ratios, which were allowed to grow as part of extending regulation by the Securities and Exchange Commission to investment bank holding companies in addition to their brokerage subsidies. That's hardly a case for government micromanagement of the financial system, a social welfare state or a planned economy, not to mention the prima facie case against them made by Japan's lost decade of stagnation, and the 30% lower living standards in Europe than the U.S.

We still have a tremendously productive labor force, great technology, and lots of tangible capital. The economy will return to health, to paraphrase the Founding Fathers, if we can keep our economic system largely intact. That's the vision, judgment and backbone we need in the next president as he navigates these difficult times.