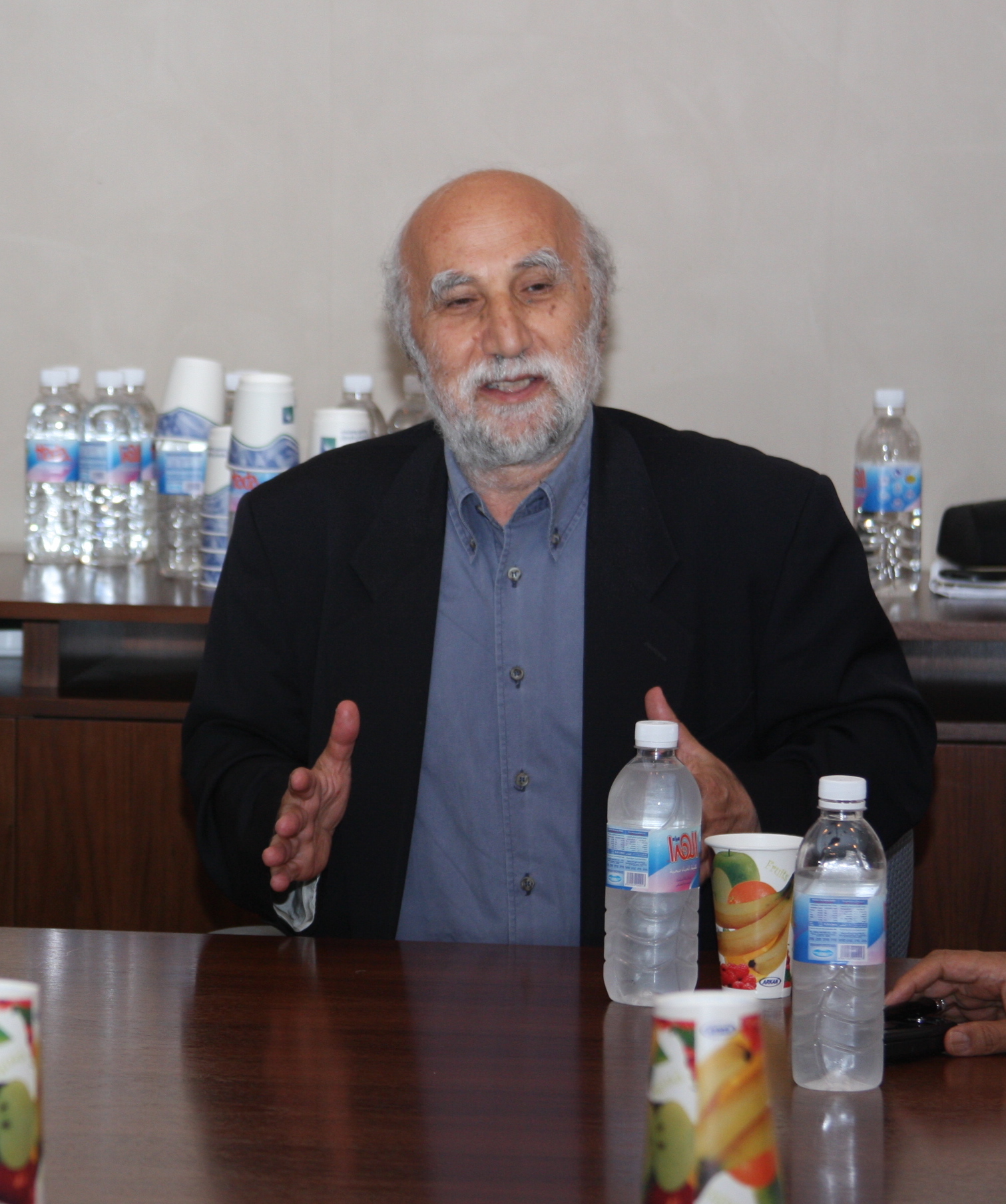 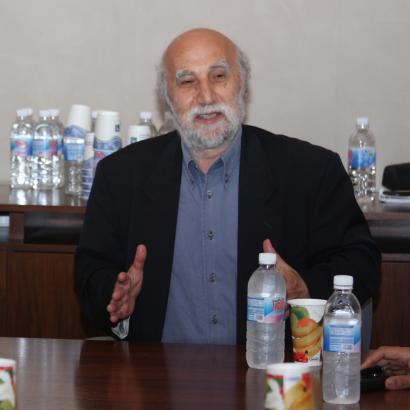 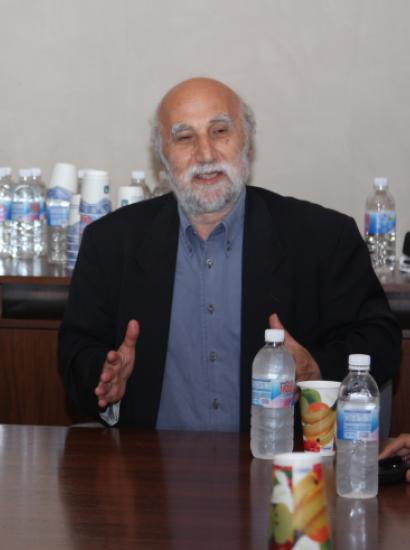 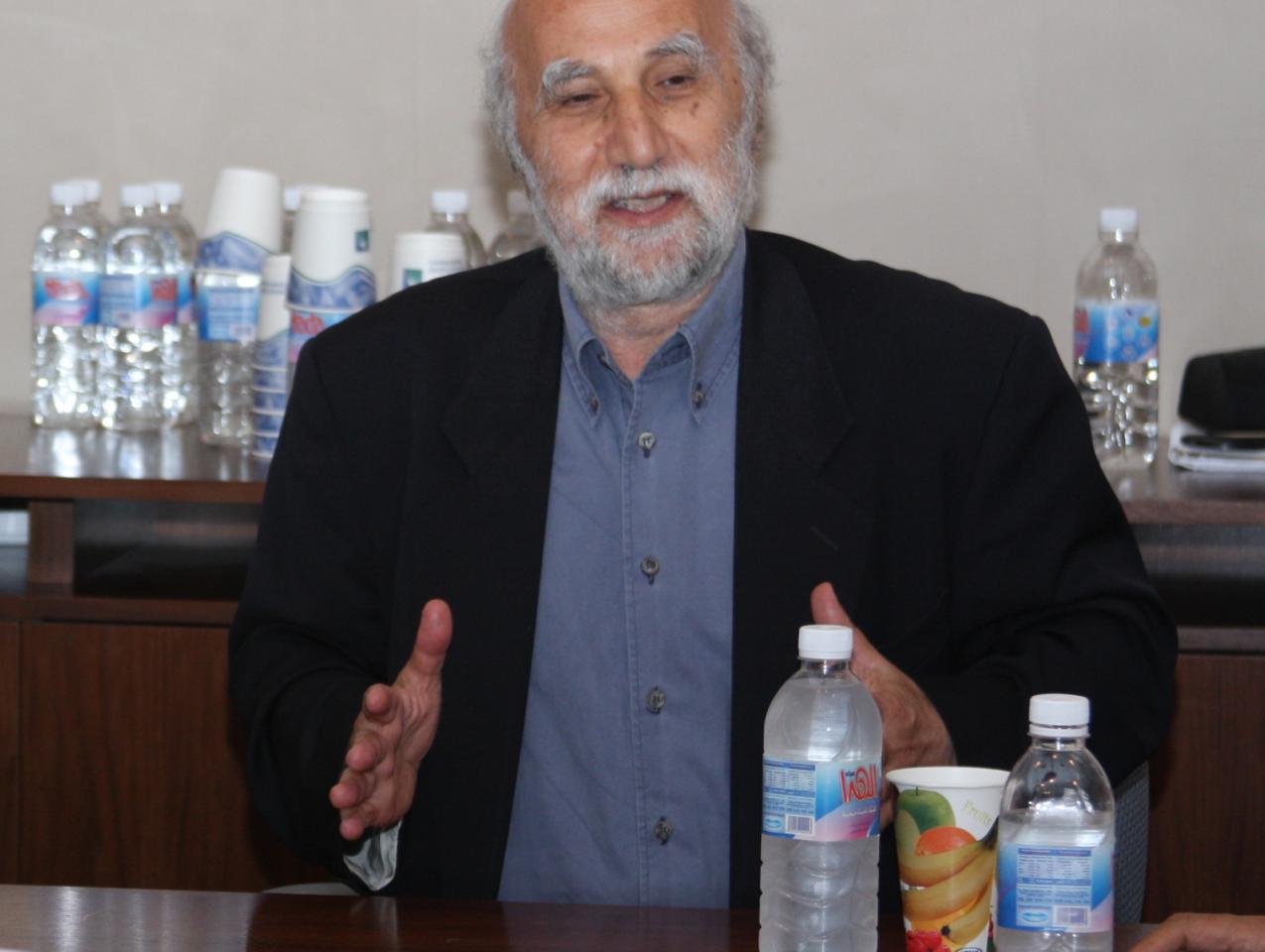 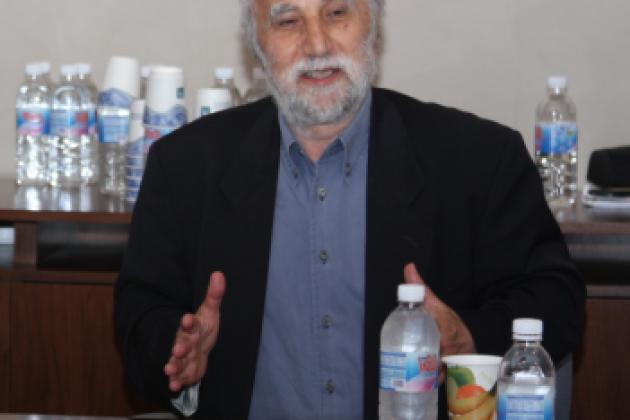 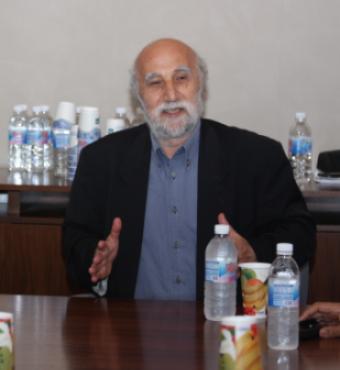 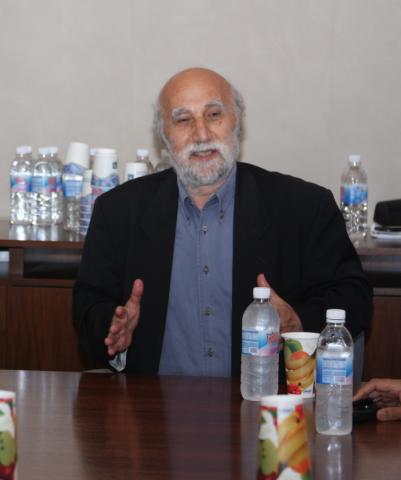 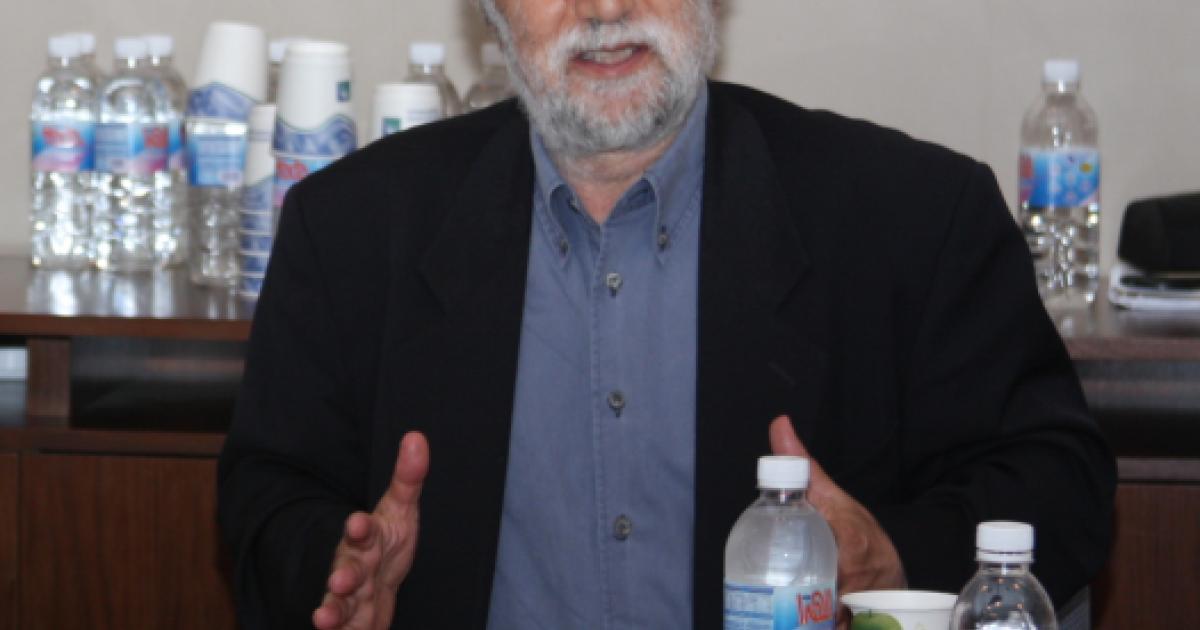 This time last year, the great scholar of the Arab world, Fouad Ajami, passed away. The occasion merits some reflections on Fouad’s life and legacy.

Fouad was first and foremost a teacher. As Harry Jaffa memorably wrote of his own great teacher, Leo Strauss, “He was and is my teacher, in a sense now archaic but not less vital for being old. The only limits of the scholar’s profit have been his own capacity.” Reading, being taught, or talking to Fouad was not a conversation about politics as a detached subject, of rulers and armies, victories and failures, but instead a communion with the peoples of the region, their hopes and mirages. It was a living experience that he invited his students to share.

Algeria’s civil war, for example, was to be approached through Boualem Sansal’s novel The German Mujahid; Syria’s butcher through Nizar Qabbani’s poem “The Autobiography of an Arab man of the sword”; and Egypt’s sorrows through the novels of Naguib Mahfouz. Fouad was, as Leon Wiseltier argued, “a political scientist whose preferred ‘data’ were poems and sermons.”

One measure of a true teacher is how he treats his former students who grow into colleagues. Instead of viewing his former students as competitors, he encouraged every one of them to become a star. Receiving an email from Fouad was often a combination of joy and embarrassment. The simplest article or argument was praised with words like “I have learned from all that I have read of yours,” “your piece has brought real clarity to the subjects you have taken up,” or “sure enough you were generous to say that I had something to say about Egypt, but I truly believe you are the teacher.”

Fouad was shaped by the bitterness of Israel’s 1967 defeat of the Arab states. The young enthusiast for Arab nationalism and its tragic hero, Gamal Abdel Nasser, had been mugged by reality as the utter Arab humiliation played out in the hot sands of Sinai. The magnitude of the defeat horrified Arab intellectuals at the time, Fouad among them. Defeat, however, works in mysterious ways. Some were transformed into Islamists; others changed into champions of a romanticized revolutionary Palestinian activism; nihilism took its hold on the rest. The curses that the poet Nizar Qabbani threw years later at Arabs were not born out of hatred but out of loving pain. In his poem, “When will they announce the death of the Arabs?” he wrote:

I try to denounce my vocabulary

and the curse of the subject and predicate

I try to shake away the dust

and wash my face with rainwater

From the authority of the sand, I try to resign

But if Fouad shared this transformative moment with other Arab intellectuals, it is his remarkable qualities as a scholar and a man that would lead him down a different path, away from Islamism, nihilism, and the mirage of deliverance that visited the region so many times. He was, as Michael Doran called him, “an original, a huge personality and intellect who followed his own star.”

Describing Fouad’s book, The Arab Predicament, Egyptian intellectual Gamal Roshdy told me. “The Arab Predicament is quite unique and almost unparalleled in modern Arab culture, not only because of its early timing, but because of the nature of the critique it leveled at the Arab politics and society. For Ajami, 1967 was not just a setback, nor was it a military defeat; it was an embodiment of something rotten and fundamentally wrong, deeply rooted in Arab culture and society. Ajami was brave enough to bring this ‘thing’ out to the open. It was like revealing a ‘family secret’ kept in the dark for so long. No wonder that the 'family' rejected him as an outcast.”

Nor was Fouad’s intellectual courage limited to the Arab world. His willingness to stand in front of the lynching mob and defend Scooter Libby arguing for his innocence speaks volumes of the man.

Fouad’s argument that “the wounds that mattered were self inflicted” made him an outcast among the Arabs. As the great Arab poet Al Mutanabi had put it, he was “alone, without companion, in every town.” He was a man cursed by Arab pseudo-intellectuals and shunned and excommunicated by his tribe for his insult to its mirage of greatness. It is a testament to Fouad’s character that he did not allow such curses to overwhelm him, though there is no doubt that they hurt him. In our first meeting, he warned me how my path would be filled with similar curses. Changing from English into Arabic, he told me hayeshtemook, hayeshtemo meratak: “They will curse you, they will curse your wife.” His pain was obvious. The pre-Islamic Arab poet Tarafa Ibn El Abd had described the feeling: “Until I was shunned by the entire tribe …. Like a mange stricken camel smeared with tar.”

Fouad never allowed that pain to consume him. Nor did he allow himself to be blinded by hate towards his tormentors. Following Fouad’s death, his critics invented a new accusation. Ajami they claimed, had said “good riddance” when his intellectual nemesis, Edward Said, had died. Obviously the accusers had never known Fouad. During a visit to New York, as Fouad was walking me through his neighborhood in Manhattan, he pointed out where Said had lived. “We saw each other in Said’s last days on the street but never talked,” Fouad said. Posing, his voice changed, he continued: “I wish we had made peace before he died.” It was a remarkable moment, Said, by far Fouad’s intellectual inferior, had spent years cursing Fouad, accusing him of every sin—and yet, while pained by those attacks, and while rightly dismissive of Said’s pseudo-scholarship, Fouad rose above it.

One favorite line of attack was to dismiss Fouad as a Shi’a and an American who had no empathy for the region. “Those attacks were what stung him most,” Lee Smith wrote—“that he was simply acting on sectarian impulses.” It must have perplexed his detractors, if they sought to understand, how Fouad the Shi’a had championed the Sunni rebellion against the House of Assad. Fouad’s Shi’ism impacted his life, but he was a human being above all, and an exceptional one at that. His deep attachment to the plight of Shi’a did not make him incapable of transcending that plight just as an Arab Christian’s passion for the plight of Middle East Christians did not make him less of an Arab. Fouad was anything but a bigot who viewed the world through what was best for a particular sect or ethnic group.

Those who focused on his championing of American power in the region missed the mark. As Michael Young has noted: “What really mattered to Fouad was not American power per se, but the fact that it might be used to transform the Middle East democratically. It was born of his deep frustration with an Arab world that for most of the time he studied it, could not break free from suffocating authoritarianism and sterility.”

Fouad did not lack empathy to the peoples of the Arab world; he overflowed with empathy. It was precisely that empathy that drove Fouad to support the invasion of Iraq. Fouad knew well the troubles of the region, but he believed that America could deliver something to the region that it not only lacked, but, more importantly, that it desperately needed; liberty.

Fouad’s relationship to Egypt is perhaps the most neglected aspect of his scholarship. It is remarkable that Fouad is not known as one of the most astute observers and interpreters of Egypt. Fouad had fallen in love with the country that in his words “takes the outsider in” and “bares its soul and answers his questions.” The country’s struggles with modernity fascinated him, a struggle he described as follows: “If theirs has not been a particularly successful quest, it has been a historically gripping drama, complete with heroes, villains, tragedies, and, here and there, some solid achievements.” He was probably describing himself when he wrote: “On Egypt’s performance, other Arabs have been and remain fixated, applauding at times, full of derision at other times.” In this, perhaps more than anything else, Fouad was Said’s opposite.

This is not to suggest that Fouad stepped into the trap of the naïve outsider who remained blind to the real Egypt as he fell for a country of his own imagining. Fouad knew the contradiction between Egypt the idea and Egypt the miserable country—and yet something about Egypt always fascinated Fouad. In numerous articles, he quoted the words of English writer Edward Morgan Forster: “Egypt is a country accustomed to harmonizing contending assertions.” It is this aspect of Egypt that Fouad fell in love with. The country was a life away from the ugliness of the Arab world.

True, Egypt had invented the mukhabarat, but even under Nasser, the country had never witnessed the horrors that would become a hallmark of Arab rulers. Egypt never had its Hama or Halabja. No Republic of Fear or Abdel Rahman Maneef’s East of the Mediterranean could be written about it. The mediocre nature of the country best captured by Fouad’s description of its long-term dictator as “a civil servant with the rank of President.”

Fouad appreciated Egypt because it exemplified the kind of tolerance he hoped the rest of the region could achieve—and it was the loss of this tolerance that pained Fouad in his last days. As the Egyptian-American intellectual Maged Atiya writes, “Ajami’s admiration for Egypt always seemed part-and-parcel of his desire to reform the Arab culture and improve the lot of the Arabs.” No wonder his last book included the remarkable line: “The country may have lost the luster of old, and Arabs may no longer be fixated on that city as they had once been, but this Arab time shall be judged by what comes to pass in Egypt.”

Eulogizing his friend Emile Zola, French Prime Minister George Clemenceau had said, “Men have been found to resist the most powerful monarchs and to refuse to bow down before them, but few indeed have been found to resist the crowd, to stand up alone before misguided masses, to face their implacable frenzy without weapons and with folded arms to dare a no when a yes is demanded. Such a man was Zola!”

Such a man was Fouad Ajami.

Will the Arabs ever come to grips with Fouad’s legacy, and his love for them? Will they ever recognize that the wounds that mattered were self inflicted and try to heal them? As the Arab world continues its descent into the abyss, its peoples cling more to conspiracy theories and refuse to take responsibility for their fate. But Martin Kramer, in his testimonial about Fouad, believes that that moment shall eventually come. “'In time,' he wrote in his last message to me, 'you will fully understand and forgive. In time, I believe, the Arabs will do the same.'” Or, in the words of the Arab poet Abu Firas El Hamdani: “My people will remember me in times of trial …. It is in the darkest of nights that the moon is missed.”