To the Shores of Tripolitania

Libya has known autocrats and invaders before. A century ago, Italians came, saw, conquered . . . and were defeated. By Charles Lindsey. 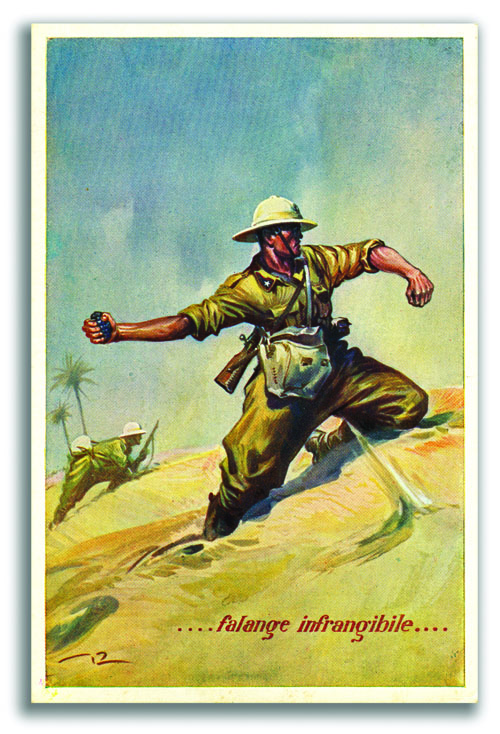 To the Shores of Tripolitania 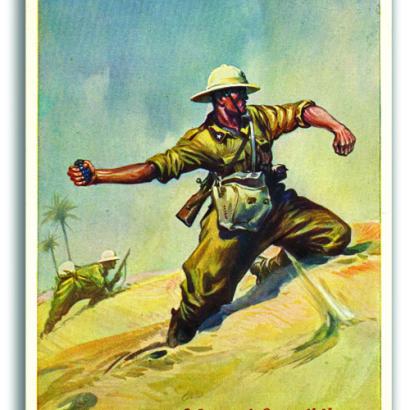 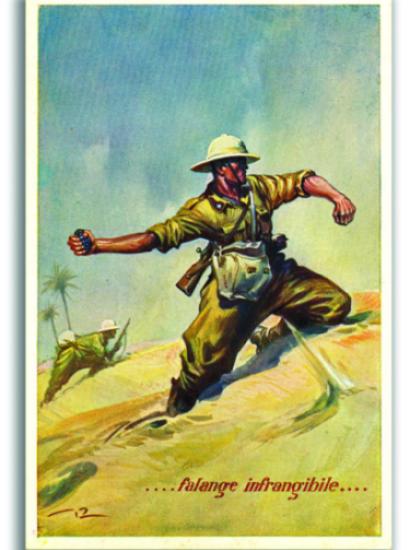 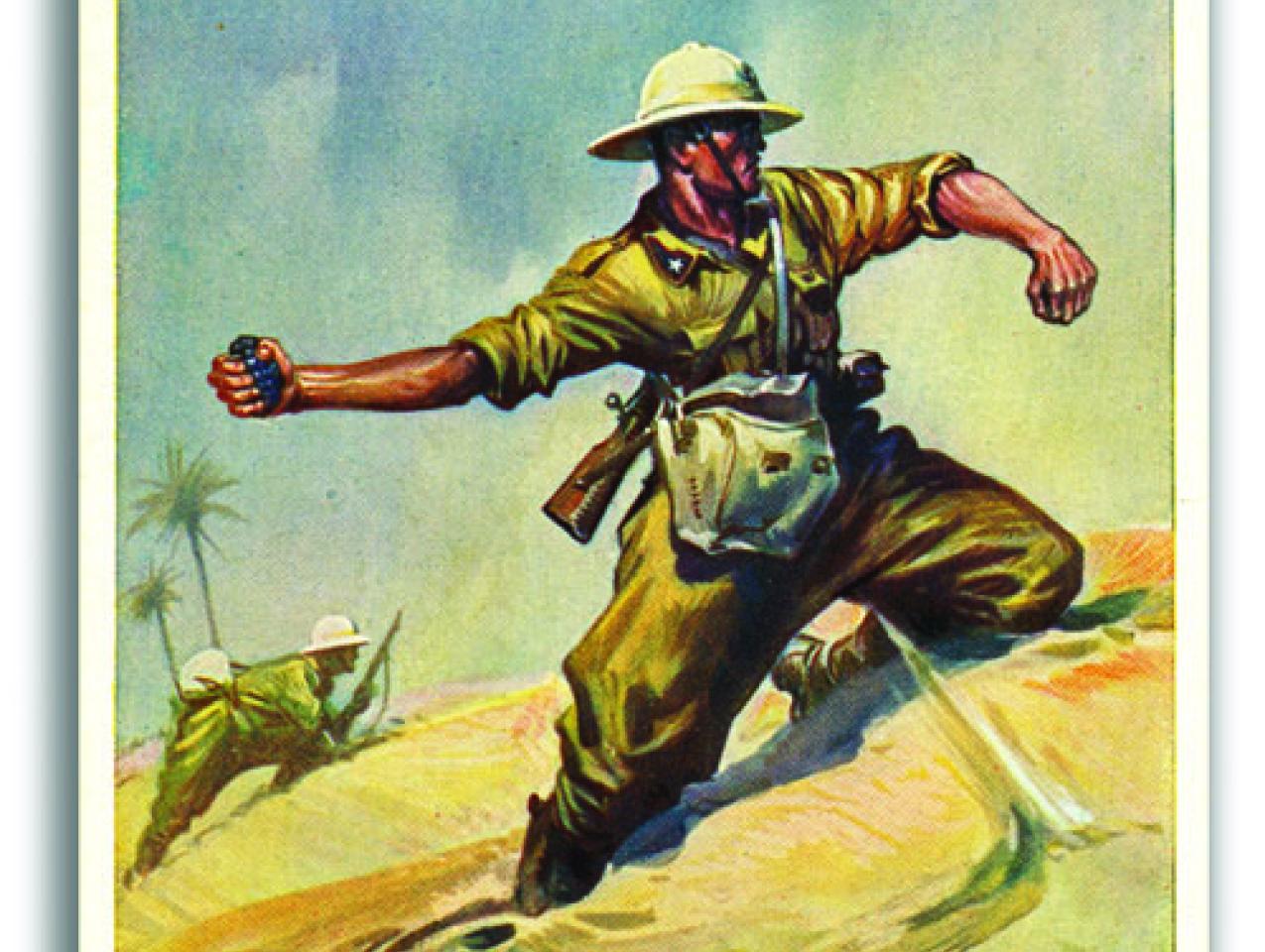 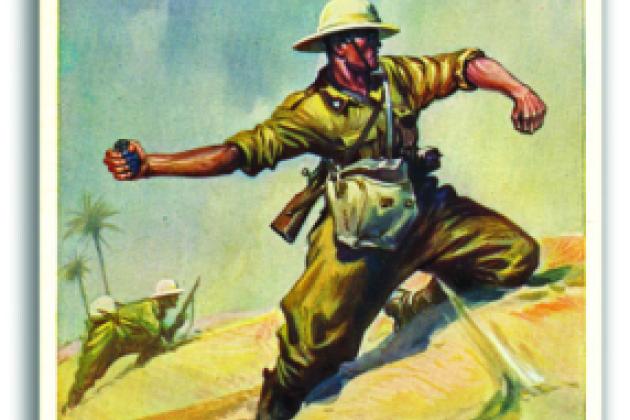 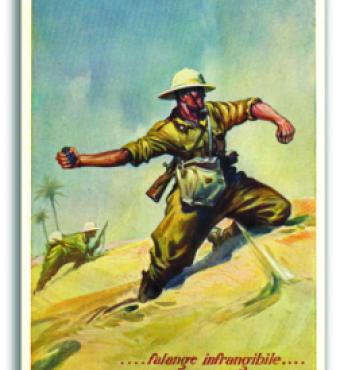 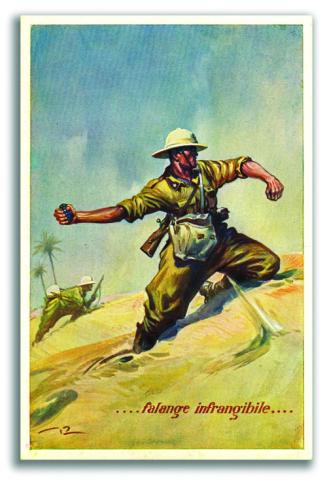 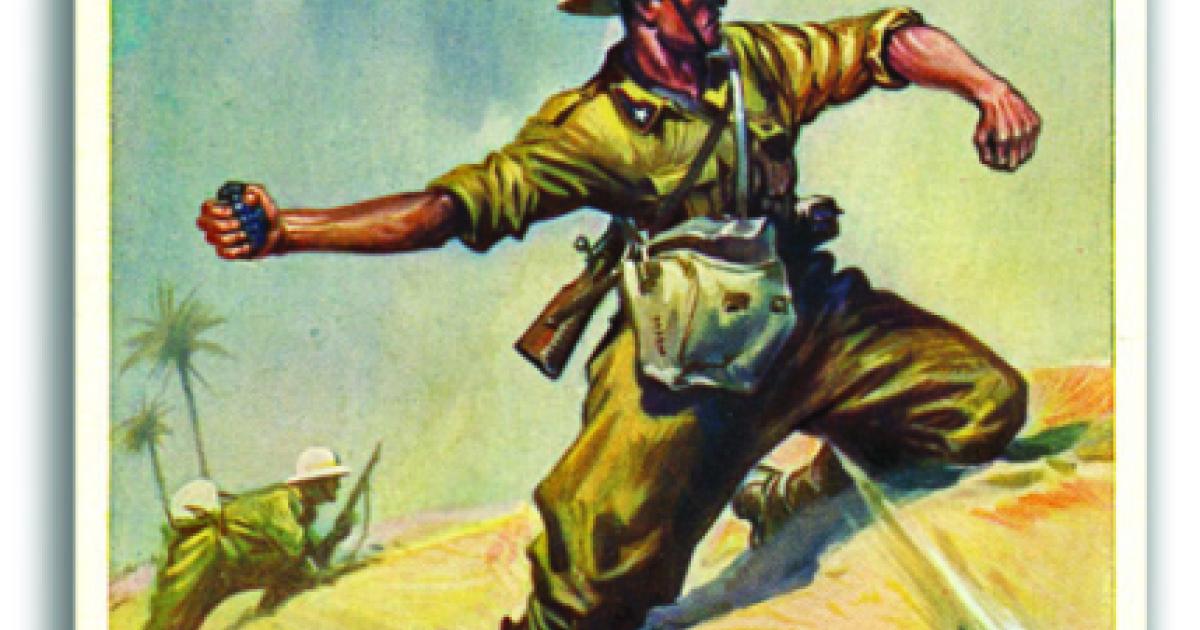 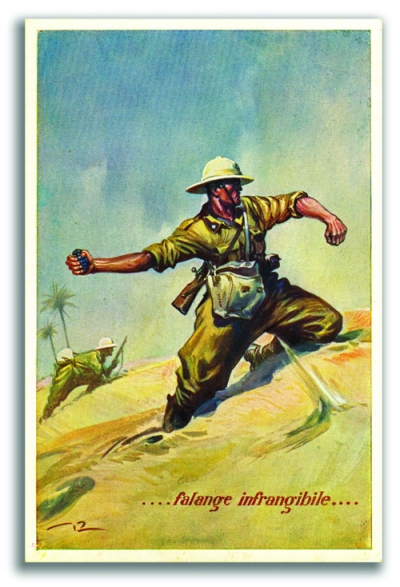 The postcard celebrates a battalion of the "Hunters of Africa," characterizing the Italian cacciatori as an unbreakable phalanx. The address side of the card lists many of the battles the unit fought in Libya between 1914 and 1931. One of them was at Misrata, a prominent battleground in the 2011 Libyan civil war. 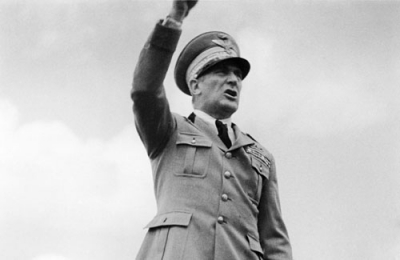 General Rodolfo Graziani commanded Italian forces in Libya in the 1920s. Afterward he co-led an invasion into the Horn of Africa, proclaiming, "The Duce will have Ethiopia, with or without the Ethiopians." Graziani was noted for his brutal treatment of conquered Africans, both civilians and fighters, subjecting them to concentration and labor camps, expulsions, and massacres. He survived World War II and was briefly imprisoned, though never prosecuted for war crimes. 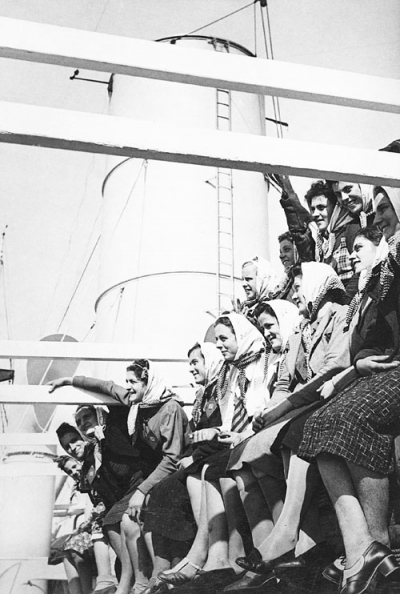 “Adriatic—girls in the sun aboard the Sardinia, October 29, 1939,”reads the inscription on the back of this photo from the Eltse Collection. Italians like these were convoyed to Libya, which Mussolini considered part of his “fourth shore,”amid promises of jobs and land offered by a state corporation, the Libyan Colonization Society. More than one hundred thousand Italians lived in Libya in 1939, making up 12 percent of the population. Most returned to Italy after World War II. 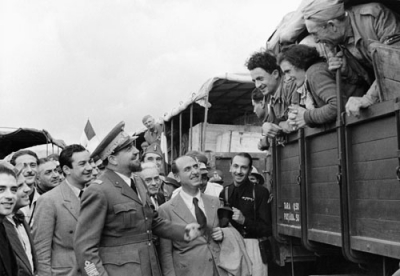 Italo Balbo, in uniform, greets Italian immigrants to Libya. Balbo was a prominent figure in the Fascist revolution that brought Mussolini to power. An aviation enthusiast, he became Mussolini’s air marshal. The dashing Balbo led a squadron of seaplanes across the Atlantic to the 1933 World’s Fair in Chicago, a celebrated event that led to an invitation to the White House. Chicago renamed a street in his honor and accepted a commemorative pillar from Italy, which still stands by the shore of Lake Michigan. Later that year Balbo was appointed governor-general of Libya, a post of political exile: he had fallen out with Mussolini. Balbo died in 1940 when Italian gunners shot down his plane on approach to Tobruk. The crash was termed friendly fire, but many believed the Duce had Balbo assassinated. 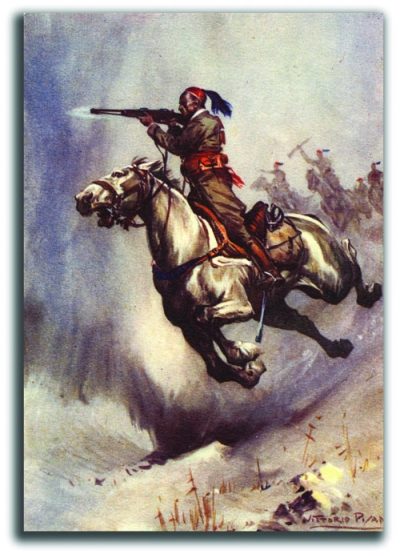 The postcard depicts a native rifleman in battle. Special units composed of Arabs, Berbers, Bedouins, and various tribal members were set up in the Italian colonial forces. Many of the postcard images portray the native troops as fierce and fearless, but not necessarily modern or disciplined. 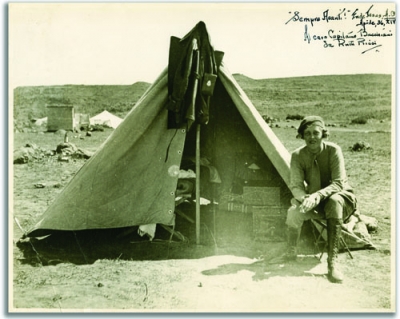 Ruth Ricci Eltse (1894–1977) was a volunteer nurse in the Italian-Ethiopian war and later roamed Italian-occupied Africa as a photojournalist. In articles and pictures, she displayed enthusiasm for the Fascist colonial project and styled herself an adventurer. Later she returned to her native New York state to lecture and teach, and then moved west and settled in Berkeley as the wife of Ralph R. Eltse, a lawyer who had served one term in the House of Representatives in the early 1930s. In this picture, inscribed “Always Forward!” and dedicated to “dear Captain Bacchiani,” Eltse strikes a characteristic pose. The date is given by both ordinary and Fascist calendars (XIV meaning 1936, the fourteenth year since Benito Mussolini seized power). 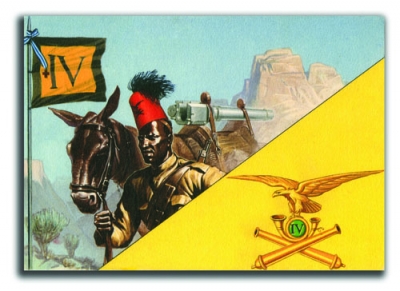 This image shows a member of a colonial artillery unit. Mussolini claimed to be the protector of Arabs in conquered Libya, going so far as to refer to them as “Muslim Italians.” Thousands of native Libyans fought for Italy during World War II. 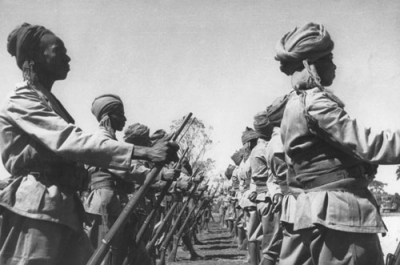 African soldiers stand in formation in this photo from the Eltse Collection. The military units recruited from among the natives included cavalry, camel troops, gendarmes, and even paratroopers, and helped in the invasions of Ethiopia and Egypt.
. 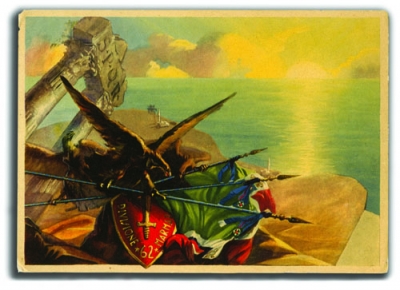 The 62nd Infantry Division Marmarica participated in the invasion of Egypt. Allied forces destroyed it during World War II. Bearing the ancient name for the land between Cyrenaica and Egypt, the Marmarica is linked here with a Roman emblem of authority, the motto SPQR (Senatus Populusque Romanus, or the Senate and People of Rome). The last Italian troops were driven out of Libya in 1943. Under a 1947 peace treaty, Italy abandoned all claims to its “fourth shore.”

Libya is periodically seized and re-seized, invaded and abandoned, playing out its human dramas against the bleak backdrop of the desert. This year the combatants were autocrat Muammar Gadhafi and rebels from the east. Nearly two millennia ago Libya was a Roman prize; before that, the region of today’s rebel power base was Greek, and was called Cyrenaica. Islamic armies came in the seventh century. The Knights of St. John arrived to fight pirates in the sixteenth century, and U.S. Marines charged onto “the shores of Tripoli” in 1805. More recently in the history of this North African nation, which lies along the lake of the ancient Western world, Libya and its provinces were Italian—but not for long.

“From the history of all periods, I have learned that nothing can be constructed unless a past that is no longer consistent with the present is destroyed, wholly or in part,” declared Rodolfo Graziani, commander of Italian forces in Libya, in 1931. He and General Pietro Badoglio had finally quashed two decades of guerrilla warfare there. The irony was that Marshal Graziani’s Fascist forces were far from destroying the past—instead they had brought from Italy their own romanticized view of antiquity, built on imperial Rome, to frame their countrymen’s North African expansion.

Libya fell into Italy’s hands in 1912 after the Italo-Turkish War, a small conflict among the dominoes leading to the Great War. Italian newspapers had encouraged their military to seize what is now Libya from the faltering Ottomans, assuming a quick victory, a welcoming population, and plenty of spoils. In a clash reminiscent of this year’s NATO-aided struggle against Gadhafi, the Italians rapidly took command of the sea and coastal centers—and then bogged down. A stalemate developed; the Italians were stuck in their strongholds, checked by an enemy they could not overcome. In 1912 the Turks agreed to withdraw, but Italian control of the restive Berbers, Arabs, and tribesmen remained spotty for years to come, especially inland. A religious-tribal movement called the Sanusi was Italy’s chief adversary.

“Their task is to open up the roads through which civilization will flow into the rich lands to be fertilized by the sweat of their brows,” reads Ruth Ricci Eltse’s glowing tribute.

Italy did not cement its control until after the military campaigns of 1919–31, which subjected native peoples to dislocation, concentration camps, and the public hanging of the Sanusi leader, Umar al-Mukhtar. Benito Mussolini, by then Italy’s dictator, was eager to fold North Africa into Mare Nostrum, “Our Sea,” the Mediterranean zone he believed Italy was destined to dominate. (Mussolini had been briefly jailed in 1911 for opposing the invasion of Libya.) In 1934 the Fascist government gave the provinces of Cyrenaica, Tripolitania, and Fezzan their modern name—Libya—restoring the name chosen by Diocletian. Italy began encouraging emigration; built railways, ports, and roads; and enlisted thousands of natives into Fascist political and military structures. Soon after, Italians marched on to Ethiopia.

A collection of postcards from the colonial period sheds light on how Italians viewed themselves on what Mussolini called the “fourth shore.” The collection, recently acquired by the Hoover Archives and placed in the African Pictorial Collection, complements another group of more than sixty-five postcards depicting Italian military actions during the war in Ethiopia and Eritrea in the mid-1930s. Seeking to glorify Italy’s actions and rally public support for them, the postcards are propaganda, urging the modern Romans to conquer and cultivate distant provinces—and suggesting that Libya, in both racial and historical terms, is their birthright.

The image on the cover of the Hoover Digest shows an Italian plowing behind a harnessed camel. Milizia Eroica, or Heroic Militia, reads the caption on the back, above a Latin insignia that says Alere Flammam—Feed the Flame. Camels had been used as desert draft animals; in fact, second-century Tripolitanian stone reliefs showed them yoked with oxen. But the context is unlikely: pastel-colored clouds, gentle light, and a pile of Roman columns in the foreground. (Roman ruins were and are visible in Libya, especially at Leptis Magna, the great city where the emperor Septimius Severus was born.) On the back of the postcard is a quote from Mussolini, stating that the militiaman and colonist must be as one, just as the Legionnaires not only fought but also built roads and tilled the fields.

Palm trees, Bedouin, and camels were stock motifs to evoke North Africa, but the subdued sun and soft colors distract the viewer—and perhaps future colonist—from the blinding light and heat endured by the new Romans, and from the desolate expanse beyond the coast. If the image looks oddly pastoral, it is because “Libya came to be portrayed as an Italian region,” according to Jacqueline Andall and Derek Duncan’s book Italian Colonialism: Legacy and Memory.

The militiaman has left his rifle and sword atop the ruins, the only visual acknowledgment that he is striving to overcome not just the land’s climate but also its inhabitants. Ruth Ricci Eltse, an American volunteer nurse in the Ethiopian-Italian war and a photographer-journalist who admired Italy’s conquest of North and East Africa, wrote an article titled “Marching with Shovel and Rifle in Ethiopia’s Land-Rush.” As in the postcard, “men are sent to East Africa to work, but their weapons are never out of reach,” she wrote. “Their task is to open up the roads through which civilization will flow into the rich lands to be fertilized by the sweat of their brows.”

Eltse, whose collected papers are also in the Hoover Archives, was a witness to Italian expansionism. The wife of a prominent New York obstetrician and Italian immigrant, James V. Ricci, she went abroad to serve with an Italian medical unit in Ethiopia and on a hospital ship. Later she took a grand tour by car of North and East Africa. In Libya she praised the Via Balbo, the crucial road link built amid brutal heat and thirst and overwork, and its namesake, Governor-General Italo Balbo, a famous aviator. Mussolini himself dedicated the highway in 1937. “Italy is proud to have accomplished a task which even Rome did not and could not undertake, the construction of the Libyan coast road,” Eltse wrote. “As Italo Balbo spread his silver wings across oceans, he is now spreading the wings of growth and civilization over some two thousand miles of African coast.” (The Via Balbo lives on as the modern Libyan Coastal Highway, where Gadhafi’s troops skirmished with the rebels.)

Eltse was not alone in praising Balbo’s programs to remake Libya, which included irrigation, tourism, scholarly gatherings, agricultural conferences, sporting events, air and auto races, even a trade fair. There were new villages and industries, as well as herds, vineyards, and olive groves—but everything was administered for the immigrants’ benefit. By 1939, more than one in ten inhabitants of Libya were from Italy. Yet after the onset of World War II, Mussolini’s dream of a fourth shore including coastal Libya and Tunisia was crushed.

Libya achieved independence in 1951. After 1969 it was ruled by Gadhafi, who claimed after his coup that his goal was to shake off a century of colonialism. This year, he found himself in somewhat the same position as the hated Italian colonizers: confined to his fortresses, using cruel methods against his enemies, insisting on his right to rule, and holding out against insurgents who had a different vision of what Libya should become. There were even rumors that Gadhafi had hidden weapons and troops in the ruins of Leptis Magna. He would not have been the first ruler to shelter behind the Roman shield and try to rewrite history in Libya’s sands.

Special to the Hoover Digest. Additional research by Yael Roberts and Bradley Bauer