The Ukraine War And Russian Stability: A Special Update On The Totalitarian State’s Political, Economic, And Social Future

In this episode of Battlegrounds, H.R. McMaster and Vladimir Milov discuss the status of the Russian opposition and what more can be done to advance Ukraine's fight for freedom. 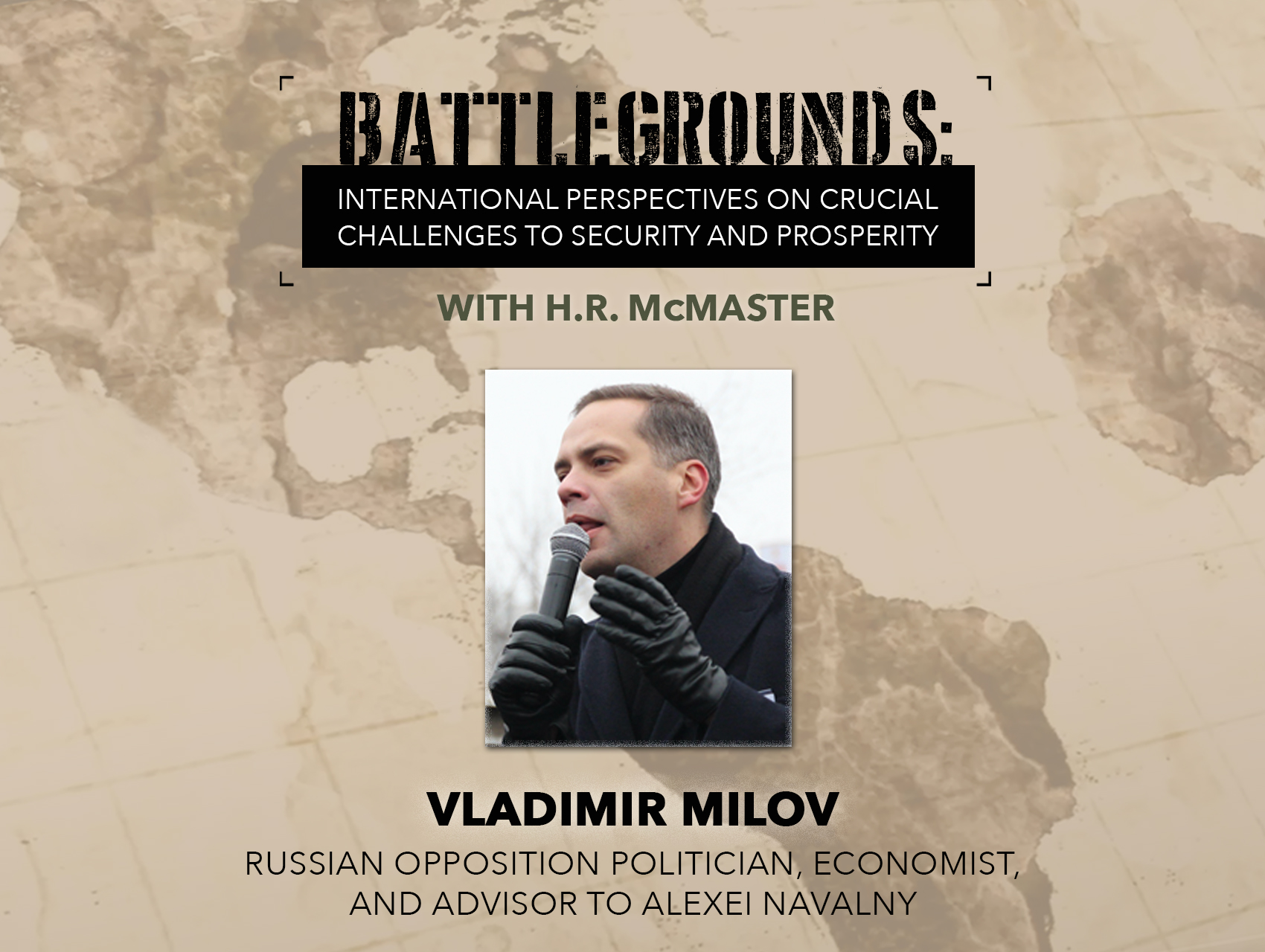 The Ukraine War And Russian Stability: A Special Update On The Totalitarian State’s Political, Economic, And Social Future 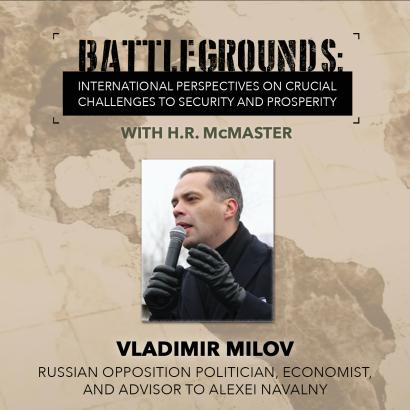 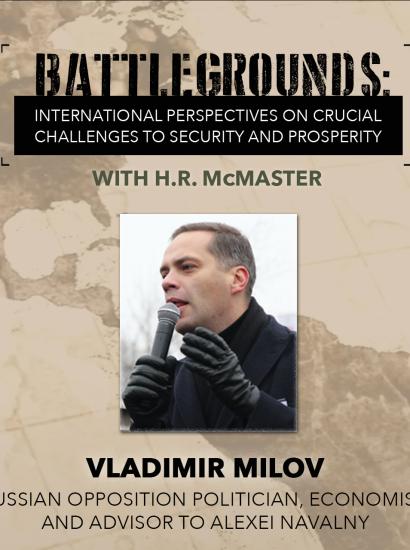 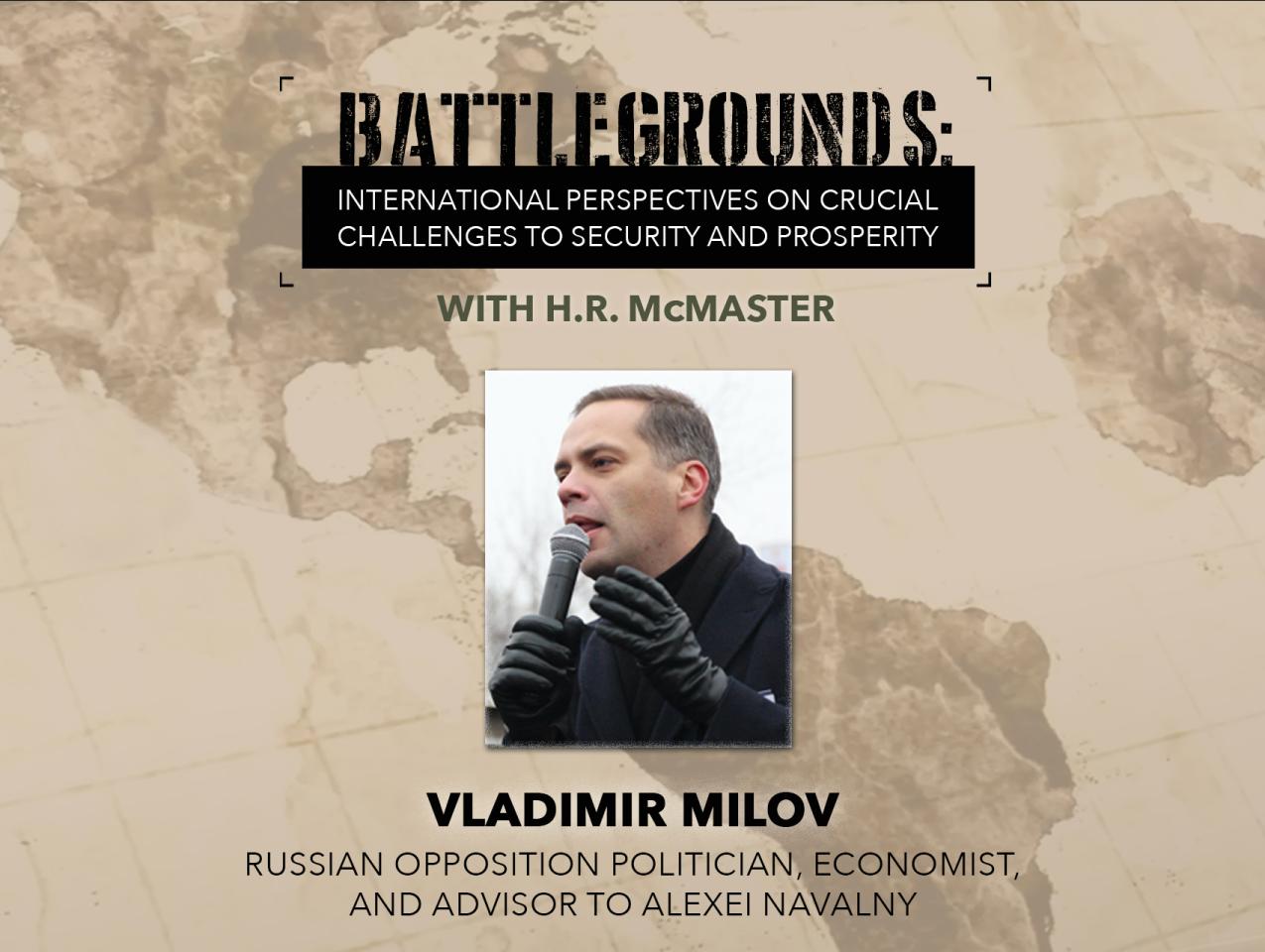 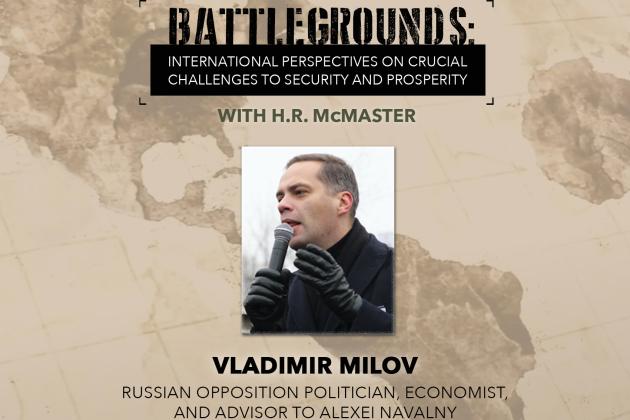 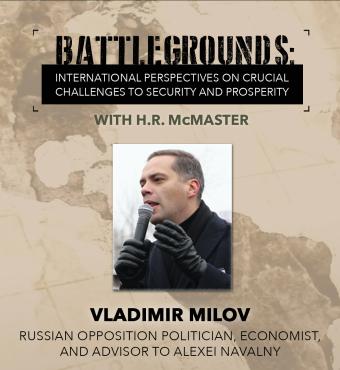 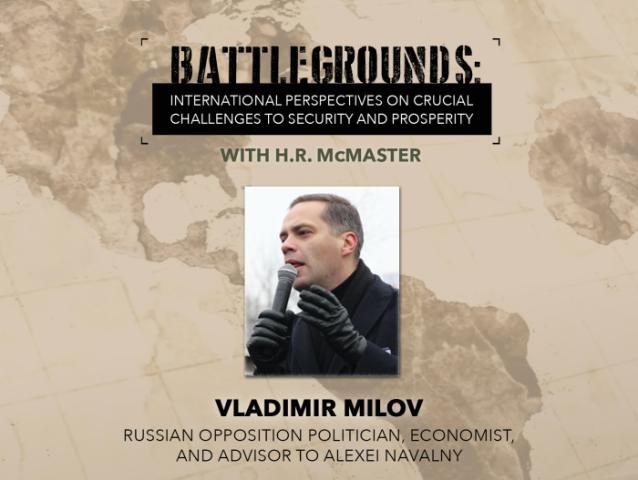 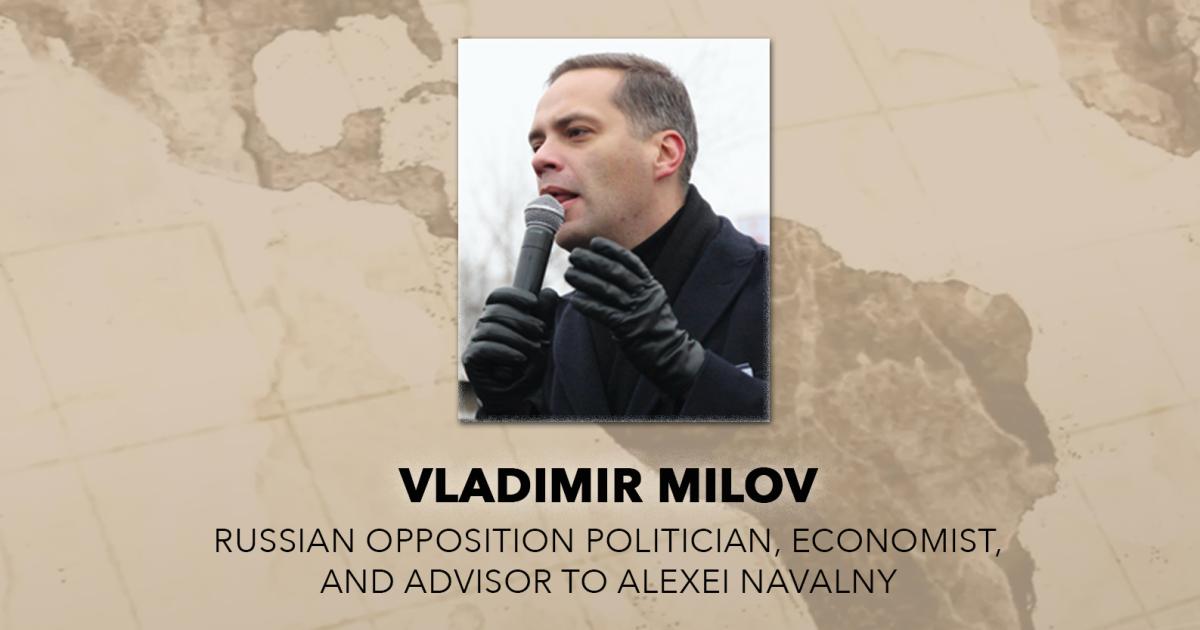 H.R. McMaster in conversation with Vladimir Milov, Russian opposition politician, economist, and advisor to Alexei Navalny, on Thursday, October 27, 2022 at 9:00am PT.

In this episode of Battlegrounds, H.R. McMaster and Vladimir Milov discuss the status of the Russian opposition and what more can be done to advance Ukraine's fight for freedom. 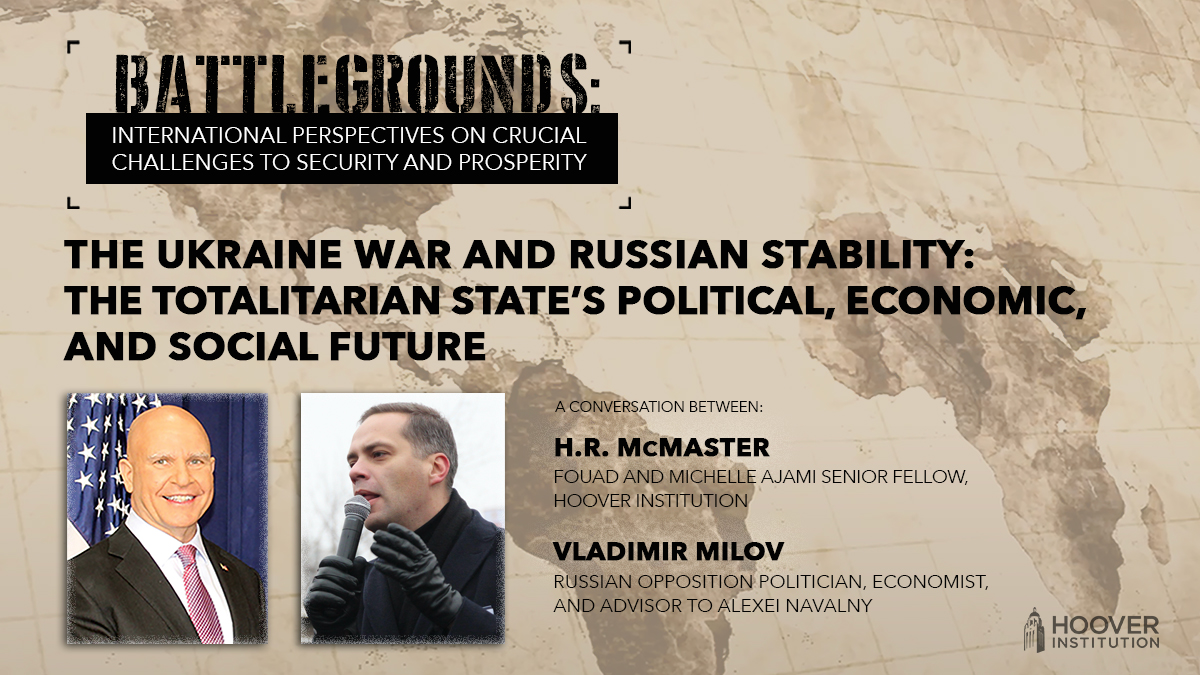 In the program, his second appearance on Battlegrounds, Milov asserts that Russian forces are losing to Ukraine because they are poorly trained, ill equipped, and running low on munitions. According to Milov, Putin was struck off balance by the success of the Ukrainian counteroffensive in the eastern city of Karkhiv. Now, in an act of desperation, Putin has expanded the scope of his “special military operation” through the partial mobilization of Russia’s civilian male population; declared sham referenda for newly established states in the Donbas region; and made veiled threats on the use of tactical nuclear weapons.

The partial mobilization, Milov argues, is in response to the failure of the early part of the special military operation. He says that at the beginning of the invasion, in February, Russian troops had already outnumbered Ukrainian forces. Milov doesn’t believe that adding fighting personnel will make up for setbacks. He says that Russian generals are frequently one-dimensional in their thinking that overwhelming deployment of manpower will win wars. They also don’t properly focus on the morale or quality of their forces. One example Milov gives is the Russian army’s recruitment of prisoners, who in many cases take advantage of their deployment to escape incarceration, and who eventually desert their posts.

Milov lauds the successes of Ukrainian forces in their counteroffensive, especially in cutting off the supply lines of the Russian army, but their path to victory depends on the delivery of more firepower and armored vehicles from the West.

As for the installation of Sergey Surovkin as the new commander of the special operation, Milov doesn’t believe that the top Russian general can replicate his successful, albeit brutal, campaign in Syria in 2017. In Syria, Surovkin didn’t face a capable adversary. This time, his heavy airpower approach will not be complimented by confident and disciplined ground forces who appear capable of retaking territories—nor by support from Iranian aerial drones.

Milov believes that Western sanctions are having an impact. Although the Kremlin is touting lower than 4 percent unemployment among Russians, underlying factors suggest that the economy isn’t performing as well as purported. Manufacturing costs remain high, and 4.3 million people are working part time, are on unpaid leave, or experience significant downtime—variables not factored into the nominal unemployment rate. Milov maintains that if the planned European Union embargo of Russian oil and gas takes its full effect and is combined with existing sanctions, Putin’s ability to finance the war will be greatly hampered.

Regarding Putin’s veiled threats over the use of tactical nuclear weapons, Milov says they should be taken seriously. However, their deployment would come at grave costs. The health of Russian troops would likely be impacted by radioactive debris. And as with the Chernobyl disaster of 1986, lingering radiation may contaminate environments and food supplies of not just Russia but other nations as well. The outrage from the world community from such a humanitarian catastrophe would likely persuade Putin not to pursue this course of action.

Milov advocates that the West and Ukraine not provide an offramp that would allow Putin to save face from his disastrous execution of the war. Milov is convinced that the Russian president would use this reprieve as an opportunity to regroup his manpower and resources for future acts of aggression, just as he did between the period of the annexation of Crimea and the launch of the special military operation in February 2022.

Milov argues that Putin’s abdication from the Kremlin won’t come by way of a palace coup. The people around Putin are, like him, ex-KGB officers and have deep financial interests in sustaining the regime. Moreover, their fate is tied to Putin’s survival. Should the regime fall, they would likely be brought to justice for their crimes by the international community, just as Serbian president Slobodan Milošević and top general Ratko Mladić were for their roles in the Yugoslav Wars of the 1990s.

More likely, the end of Putin’s Russia will be brought about by popular demonstration, especially as the Ukraine War grows increasingly unpopular, which is suggested by the decline in viewership of state media in favor of alternative sources of news provided by social media platforms.

Milov concludes that he is hopeful that Ukraine will win the war against Russia, but sadly this won’t be achieved without a period of significant human tragedy. 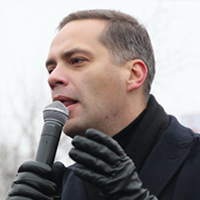 Mr. Vladimir Milov is a Russian opposition politician, publicist, economist, and energy expert, and an economic adviser to the Russian opposition leader Alexei Navalny. Mr. Milov has used to work with the Russian Government in late 1990s and early 2000s, serving as the Deputy Minister of Energy of Russia (2002), adviser to the Minister of Energy (2001-2002), and head of strategy department at the Federal Energy Commission, the natural monopoly regulator (1999-2001). Since leaving the Government, he became founder and President of the Institute of Energy Policy, a leading independent Russian energy policy think tank. Mr. Milov is one of the major public critics of Vladimir Putin in modern day Russia. Since 2017, Mr. Milov works as an economic adviser to Russian opposition leader Alexey Navalny and hosts regular talk shows at the Navalny Live Youtube channel.