France may have a case for banning the burqa. By Peter Berkowitz.

President Nicolas Sarkozy of France has announced his intention to enact a ban on the full Muslim veil. The decision—which was preceded by an extended public debate but was probably occasioned by regional elections in which the Socialist-led opposition gave Sarkozy’s party a drubbing—would expand the scope of France’s 2004 law that prohibits the wearing of headscarves and other conspicuous religious symbols at state schools.

Sarkozy’s ban on the full veil represents a draconian measure for a free society. Arguably, it is necessary and proper. But it won’t prevail without a fight. A few days after Sarkozy’s speech, the Council of State, France’s highest administrative body, declared that an outright ban would be hard to enforce, might be unconstitutional, and should be rejected. (Soon after, a similar ban was unanimously approved by Belgium’s home affairs committee but was cast into uncertainty when the government collapsed.)

Restrictions on liberty in a free society are always suspect and demand justification. The best justification is the protection and promotion of freedom.

Governments established to secure individual rights—Article 1 of the French Constitution declares that this is among the chief purposes of the government—leave individuals wide latitude to manage their private lives, an area that is normally thought to include choices about proper public attire. This is especially so regarding the veil, which expresses religiously grounded beliefs about obligations to dress modestly that many Muslim men and women consider central to their faith and essential to preserving their communities. 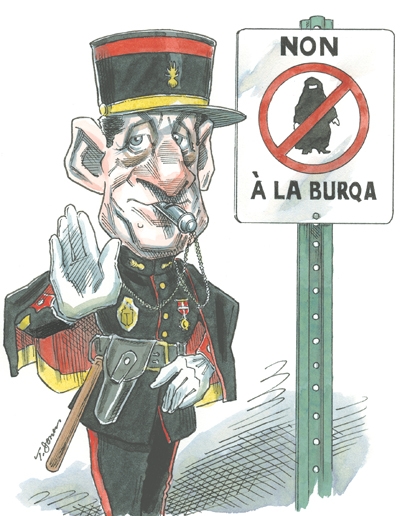 At the same time, governments have a responsibility to maintain freedom’s preconditions. They properly require parents to send their children to school to learn to read and write and study basic subjects so that they will develop into adults capable of voting responsibly, holding jobs, and taking care of themselves. Moreover, since rights are worthless where violence rules, free societies restrict freedom through the rule of law. The aim of peace and public order is to allow individuals the maximum of liberty in choosing and pursuing their way of life consistent with a like liberty for others.

Restricting liberty in a free society is always suspect and demands justification. The best justification is the protection and promotion of freedom.

Given the importance that the French Constitution attaches to liberty and the seriousness of the threat to peace and public order posed by the large, restive, and nonassimilating portion of its Muslim population, the veil represents a legitimate concern. Banning it would be justified to the extent that Muslim communities in France use the veil to deprive girls of basic educational opportunities and prevent women from fulfilling their obligations as citizens, or that terrorists create a security threat by disguising themselves behind the veil.

Circumstances, not just principles, are decisive.

A ban on the full veil in the United States would be unthinkable. This is largely due to the United States’ relatively small Muslim population and America’s history of assimilating generations of immigrants who have arrived determined to learn English and succeed on America’s terms. But a ban also would represent an unprecedented infringement of religious freedom. In America, the separation of church and state is designed both to protect the state from religious interference and to protect religion, which always has a public component, from government interference.

France is different. It is home to approximately 6 million Muslims, more than in any other European state. Muslims represent almost 10 percent of France’s population. Significant numbers of these relatively new immigrants are poor, confined to low-income and violence-prone neighborhoods on the outskirts of Paris, inclined to anti-Semitism, sympathetic to political Islam, and alienated from French social and political life.

In addition, the doctrine of laïcité—which is inscribed in Article 1 of the French Constitution and proclaims France a secular republic—separates church and state differently from America. For many French, laïcité, roughly translated as national secularism, has acquired a militant meaning, according to which government must confine religion to the private sphere. This sensibility undergirded the ban on headscarves in schools.

Sarkozy has recognized that the common French understanding of the relation between political freedom and religion can be difficult to distinguish from anti-clericalism. To correct it, he has argued for an appreciation of the historical contribution that religious faith has made to forming France, the role of faith in the moral life, and the space that freedom of speech carves out for public religious expression.

So it was noteworthy that the French president sought to outlaw the full veil partly because it “runs counter to women’s dignity.” A goal that from another politician might have expressed mere political opportunism or bigotry or contempt for faith appears, in Sarkozy’s case, to be a bold attempt to balance the claims of freedom and order.

A ban on the full veil in the United States would be unthinkable. It would represent an unprecedented infringement of religious freedom.

In a free society, prohibiting the veil because it symbolizes or enacts the oppression of women is a more perilous step than seeking to ban it on educational or national security grounds. It’s akin to the view advanced by radical feminists in America such as law professor Catharine MacKinnon—and eagerly embraced by many progressive law professors—that pornography should be banned because it degrades women by portraying them as sexual objects.

In ordinary circumstances, the response to both bans would be the same. Whether or not the veil and pornography degrade women, freedom—of women and men—is unacceptably imperiled when government is invited to determine which clothes and photographs, films and books, and eventually words and gestures respect the dignity of women.

But ordinary circumstances may not obtain today in France. Freedom is in special jeopardy when a substantial segment of the population embraces a way of life that fails to cultivate the virtues of freedom while teaching disdain for freedom’s practices and principles. In France as throughout Western Europe, the full veil, along with cousin-marriage, polygamy, and sexual violence, contributes to a culture that secludes women and creates sizable barriers to assimilation.

The most generous interpretation of Sarkozy’s risky ban is that it is pro-integration and meant to send a double cultural message. One is to the Muslim minority: the majority believes that full-body veiling is incompatible with the culture of political freedom in France. The other message is directed at the non-Muslim majority: it is your right and your responsibility to ensure that all of France’s citizens enjoy their rights and honor their responsibilities as free men and women.

This essay appeared in the Wall Street Journal on April 5, 2010. Reprinted with permission. ©2010 Dow Jones & Company. All rights reserved.

Available from the Hoover Press is Never a Matter of Indifference: Sustaining Virtue in a Free Republic, edited by Peter Berkowitz. To order, call 800.935.2882 or visit www.hooverpress.org.