President Barack Obama's 2011 budget lays out a stunningly expensive big-government spending agenda, mostly to be paid for years down the road. He proposes to increase capital gains, dividend, payroll, income and energy taxes. But the enormous deficits and endless accumulation of debt will eventually force growth-inhibiting income tax hikes, a national value-added tax similar to those in Europe, or severe inflation.

On average, in the first three years of the 10-year budget plan, federal spending rises by 4.4% of GDP. That's more than during President Lyndon Johnson's Great Society and Vietnam War buildup and President Ronald Reagan's defense buildup combined. In those same three years, spending on average hits the highest level in American history (25.1% of GDP), save the peak of World War II. The average deficit of $1.4 trillion (9.6% of GDP) is over three times the previous 2008 record.

Remarkably, President Obama will add more red ink in his first two years than President George W. Bush—berated by conservatives for his failure to control domestic spending and by liberals for the explosion of military spending in Iraq and Afghanistan—did in eight. In his first 15 months, Mr. Obama will raise the debt burden—the ratio of the national debt to GDP—by more than Reagan did in eight years.

Some specific proposals are laudable: permanently indexing the Alternative Minimum Tax for inflation, part of the increased R&D funding, reform of agriculture subsidies, a future freeze on one-sixth of the budget (only after it balloons for two years). But these are swamped by the huge expansion and centralization of government. 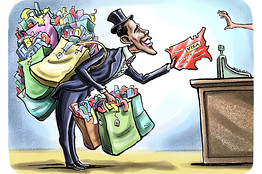 True, as he often reminds us, President Obama inherited a recession and fiscal mess. Much of the deficit is the natural and desirable result of the deep recession.

The Obama 10-year budget—unprecedented in its spending, taxes, deficits and accumulation of debt—is by a large margin the most risky fiscal strategy in American history. In his Feb. 1 budget message, Mr. Obama said, "We cannot continue to borrow against our children's future." But that is exactly what he proposes to do.

He projects a cumulative deficit of $11.5 trillion by 2020. That brings the publicly held debt (excluding debt held inside the government, e.g., Social Security) to 77% of GDP, and the gross debt to over 100%. Presidents Reagan and George W. Bush each ended their terms at about 40%.

The deficits are so large relative to GDP that the debt/GDP ratio keeps growing and then explodes as entitlement costs accelerate in subsequent decades. So worrisome is this debt outlook that Moody's warns of a downgrade on U.S. Treasury bonds, and major global finance powers talk of ending the dollar's reign as the global reserve currency.

Ken Rogoff of Harvard and Carmen Reinhart of Maryland have studied the impact of high levels of national debt on economic growth in the U.S. and around the world in the last two centuries. In a study presented last month at the annual meeting of the American Economic Association in Atlanta, they conclude that, so long as the gross debt-GDP ratio is relatively modest, 30%-90% of GDP, the negative growth impact of higher debt is likely to be modest as well.

But as it gets to 90% of GDP, there is a dramatic slowing of economic growth by at least one percentage point a year. The likely causes are expectations of much higher taxes, uncertainty over resolution of the unsustainable deficits, and higher interest rates curtailing capital investment.

The Obama budget takes the publicly held debt to 73% and the gross debt to 103% of GDP by 2015, over this precipice. The president's economists peg long-run growth potential at 2.5% per year, implying per capita growth of 1.7%. A decline of one percentage point would cut this annual growth rate by over half. That's eventually the difference between a strong economy that can project global power and a stagnant, ossified society.

Such vast debt implies immense future tax increases. Balancing the 2015 budget would require a 43% increase in everyone's income taxes that year. It's hard to imagine a worse detriment to economic growth.

Presidents and political parties used to propose paths to a balanced budget. After almost doubling it, Mr. Obama proposes to substitute stabilizing the debt/GDP ratio, a much weaker goal.

That goal requires balancing the budget excluding interest payments, the so-called primary budget. But he never achieves this, even after five and a half years of economic growth, withdrawal from Iraq and Afghanistan, and repaid financial bailouts. The 2015 budget still calls for a primary deficit of $181 billion.

For perspective, returning 2015 spending to population growth plus inflation produces a primary surplus of $645 billion (3.3% of GDP). Mr. Obama's spending turns a short-run crisis into a medium-term debacle.

Two factors greatly compound the risk from Mr. Obama's budget plan. He is running up this debt and current and future taxes just as the baby boomers are retiring and the entitlement cost problems are growing, which will necessitate major reform. (Mr. Obama didn't get any help from his predecessors: George W. Bush's growing Medicare prescription drug benefit was not funded, and Mr. Clinton's Social Security reform was a casualty of the Monica Lewinsky scandal.) And Mr. Obama's programs increase the fraction of people getting more money back from the government than the taxes they pay almost to 50%, just as the demographics on an aging population will drive it up further. That's an unhealthy political dynamic.

Talk With Victor Davis Hanson On "The Strangest Year 2020"