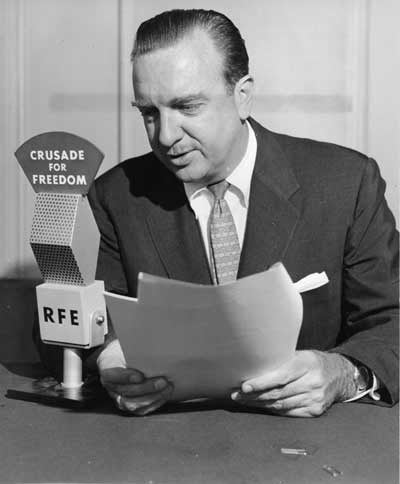 Like many American broadcast personalities of the day, Walter Cronkite lent his support to the work of the Radios. Cronkite narrated "Towers of Truth," a film about RFE's work commissioned by the National Committee for a Free Europe and shown in conjunction with Crusade for Freedom fund raising efforts. RFE/RL corporate records, Box 115, Folder 15, Hoover Institution Archives. 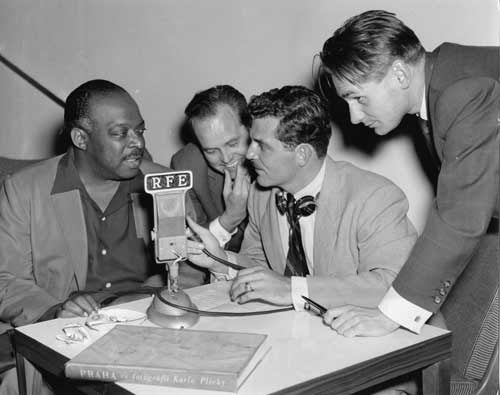 Jazz musician and bandleader William "Count" Basie (left) visits the RFE studios during a break in his 1956 European tour. Jazz was an important component of the Radios' programming throughout the years. At one time labeled "the music of putrescent capitalism" by the Soviets, jazz was suppressed to varying degrees in the USSR and its satellites. Despite official condemnation, jazz remained popular in the region, and RFE/RL took advantage of this, using music to build a base of devoted listeners. The Radios recorded performances by American jazz artists in New York and Munich for broadcast to their listeners; one of the Radios' biggest jazz coups was the recording and distribution of an album of Soviet jazz compositions smuggled out of the USSR by members of Benny Goodman's orchestra. RFE/RL corporate records, Box 117, Folder 22, Hoover Institution Archives. 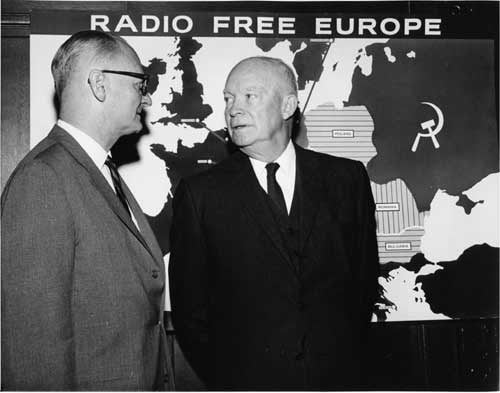 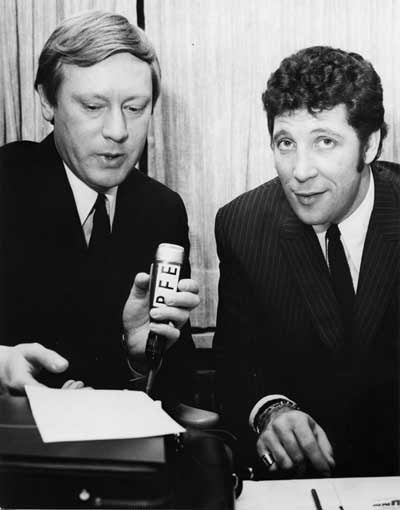 Singer Tom Jones (right) gives an interview to disc jockey Joe Sevecka of RFE's Czechoslovak broadcast staff. Although most of the Radios' programming was devoted to news and analysis, the stations also broadcast a good deal of cultural material, including popular music. RFE/RL on-air personalities would attend the concerts of prominent Western recording artists during their Munich tour stops and record music and interviews for later broadcast. Western music was especially popular among the young people of Eastern Europe; at least one communist-bloc official station resorted to counterprogramming RFE with its own popular music offerings. RFE/RL corporate records, Box 128, Folder 26, Hoover Institution Archives. 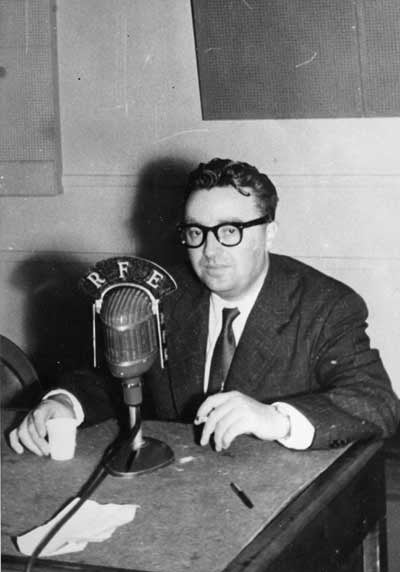 Lieutenant Colonel Josef Swiatlo, a defector from the Polish secret police, provided one of RFE's first major broadcast successes. Swiatlo, who was deputy head of the division of the secret police responsible for the ideological purity of the party, was familiar with the inner workings of the party leadership, including the Stalinist purges and the privileges they enjoyed. Swiatlo appeared on RFE's Voice of Free Poland almost nightly for three months, informing listeners in his native Poland with tales of the crimes, corruption and moral bankruptcy of their communist overlords. The revelations were later condensed into a forty-page booklet; thousands of copies were carried into Poland by balloons launched by RFE and mailed to Polish officials. The Swiatlo broadcasts led directly to a major shake-up of the secret police and played a major part in establishing RFE's credibility and popularity in Poland. 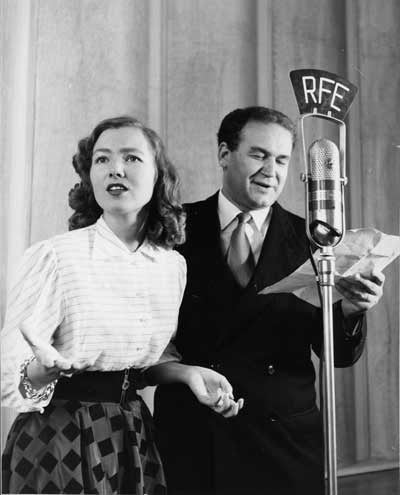 RFE staff perform during a weekly broadcast of Polish Tea Party. This variety program was typical of RFE's entertainment programming in the early years of the station's operation. Tea Party and other programs employed a truly valuable weapon against the communist regimes--humor. But humor was not the only weapon in the Radios' arsenal; throughout the years, the Radios included religious broadcasts, readings of banned literature, and popular music in the mix of programs beamed over the Iron Curtain. Although news and analysis were the Radios' primary output, entertainment and religious broadcasts were an essential part of the Radios' conscious effort to serve as a surrogate "home service" for the communist-bloc countries. 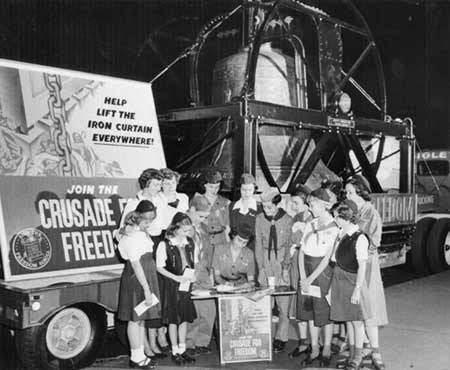 Boy Scouts and Girl Scouts add their names to freedom scrolls next to a flatbed truck bearing the Freedom Bell. The bell was cast on the orders of the Crusade for Freedom, an outgrowth of the Free Europe Committee, which raised funds to support Radio Free Europe. After a nationwide tour and fund-raising drive, the bell was shipped to Berlin and installed in the West Berlin city hall at a ceremony attended by some 400,000 Berliners. A recording of the bell tolling was used as an on-air identification for RFE's programming. Despite big-name supporters and extensive public participation, the Crusade for Freedom never provided more than a small portion of RFE's operating budget, the bulk being composed of funds secretly appropriated through the CIA. 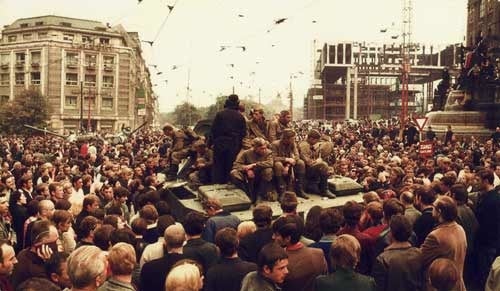 Reflecting lessons learned in the Hungarian revolution of 1956, RFE took a cautious approach to reporting the 1968 efforts of Czechoslovak reformers to implement "socialism with a human face". When Warsaw Pact forces rolled into Prague in August 1968, RFE leadership implemented a contingency plan that strengthened control over programming and ensured that the Radios act as voices of moderation. In the photo, the building under construction on the right is the Czechoslovak parliament, which President Havel later offered as a new headquarters for RFE/RL. RFE/RL moved from Munich to Prague in 1995. 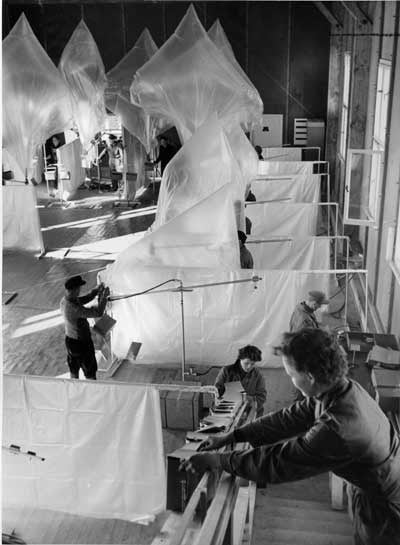 German workers fill balloons with hydrogen in preparation for an operation to carry leaflets over the iron curtain. Balloon operations conducted by the Free Europe Press were an important part of RFE's strategy in the early days. In addition to providing information on RFE's programming, the leaflets contained messages targeted at concrete events in the communist bloc countries. For example, Operation Veto, a combined radio and balloon campaign in 1954, urged Czechoslovak citizens to put ten demands to their elected representatives in trade union councils and local government bodies. Balloon operations elicited vehement responses from the communist governments. In the wake of the Hungarian revolution, balloon operations were halted. 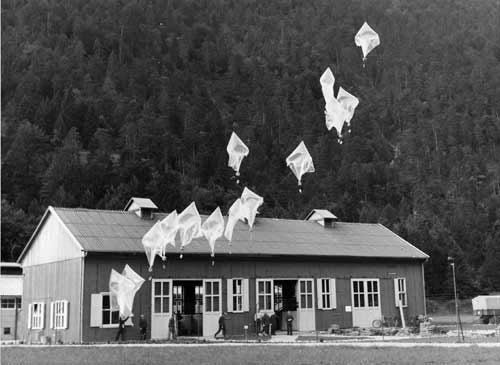 Workers release hydrogen balloons carrying Free Europe Press literature from a location near the iron curtain. FEP balloon operations employed two types of balloons: clear polyethylene pillow balloons like those pictured here and surplus rubber weather balloons. Balloon operations employed several delivery methods. Some balloons were designed to burst over the target, scattering literature over a broad area; others were partially loaded with literature and gradually sank to earth as hydrogen leaked from the balloons; and a third type carried a suspended load that was released when dry ice ballast melted. By calculating the rate of hydrogen leakage and carefully measuring the dry ice ballast, FEP balloon crews were able to hit specific targets with a good degree of accuracy. The communist regimes reacted strongly to balloon operations: unsuccessfully scrambling fighter aircraft to shoot down the balloons and pursuing diplomatic challenges through the UN on grounds that the balloons posed a danger to civil aviation in the region. Balloon operations were suspended in the mid-1950s. 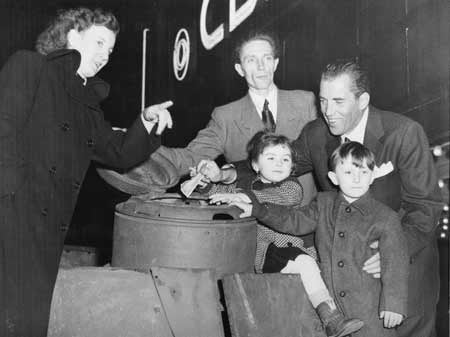 Popular American broadcaster Ed Sullivan (right) poses with the Uhlik family during a Crusade for Freedom fund raising tour. Vaclav Uhlik, a Czech mechanic, spent several years secretly fitting out an abandoned World War II British scout car with armor and treads. Then, gathering his wife and children and four friends, he set out for the German border in his homemade tank; the border guards were apparently so stunned by the appearance of the strange vehicle that they made no effort to block the escape. Carl Koch, the RFE reporter sent out to cover the story of this dramatic escape, negotiated the purchase of the vehicle, and it was shipped to the United States where it served as a focal point for RFE fund raising efforts. 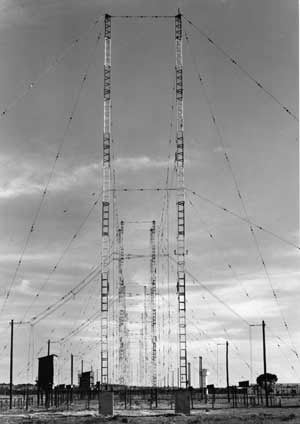 Beginning with a spare 7.5-kilowatt transmitter left over from Office of Strategic Services' operations during World War II, the Radios eventually became one of the most powerful broadcast services in the world. By the mid-1960s, the RFE broadcast site at Gloria, Portugal, and the RL broadcast site at Playa de Pals, Spain, featured multiple 250-kilowatt transmitters that could be linked to produce signals strong enough to overwhelm Soviet jamming. Linking the transmitters, though it produced a powerful signal, was regarded as inefficient, and the Radios preferred to broadcast simultaneously on multiple frequencies in order to outmaneuver the jammers. At the height of RFE/RL operations in the early 1980s, the Radios could boast of a network of forty-five transmitters, with a combined broadcast power of nine million watts.