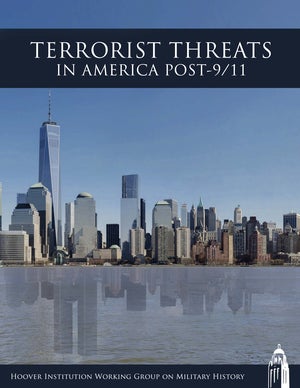 The ultimate fear of Americans is a repeat of the 9/11 attacks, over a decade after the devastating attacks on our airliners, the World Trade Center, and the Pentagon. Are we still safe from another attack, or has our vigilance slipped both here and abroad, out of complacency, naiveté about the ongoing threats we still face, or the enemy’s ability to expand and innovate?

What Terrorism Could Have in Store for America
by Mark Moyar

The scarcity of significant terrorist attacks in recent years has led Americans to assume that the days of mass casualty attacks are in the past. But history teaches us to beware of the assumption that recent trends foretell the future. Americans are paying insufficient attention to unexpected events in which terrorists inflict serious harm on the United States. The routine occurrence of unpredictable events offers good reason to invest broadly in counterterrorism and homeland security.

ISIS: A Threat?
by Williamson Murray

The past suggests that for the short term ISIS does not represent a significant threat to the strategic security of the First World’s homelands. A few returnees may slip though the intelligence net, but it is unlikely that they will cause anything other than local mayhem. If the United States and assorted allies fail to act to support their friends in the Middle East on a long-term basis, ISIS and other assorted groups will destabilize the world’s oil supply. The lessons of Munich are clear: those who put off reacting to long-term threats will pay a terrible price.

Although we have become much more capable at detecting terror threats to the homeland, our enemies are determined and ingenious. The most-frequent threats we will face are lone-wolf or small-group terrorists inspired by notions of jihad but acting in relative autonomy; however, Islamist fanatics will not stop attempting to stage dramatic large-scale strikes against the United States. The fundamental obstacle to a more powerful reply to fanaticism is our unwillingness to accept the clear-cut (if unappealing) lessons of history regarding the defeat of faith-fueled insurgencies.