The history of the Hoover Carillon

Herbert Hoover recognized that the carillon that chimed from the Belgian Pavilion of the 1939 New York World's Fair would be the most appropriate crowning symbol for the library building he was planning for Stanford. 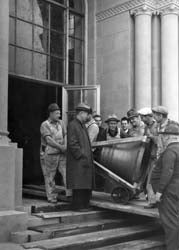 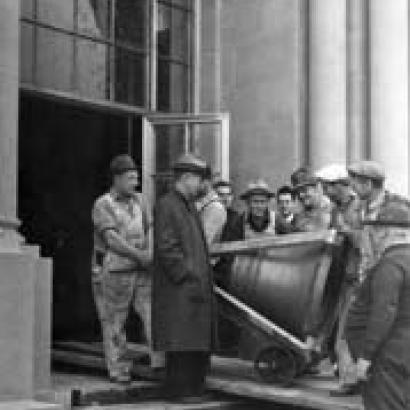 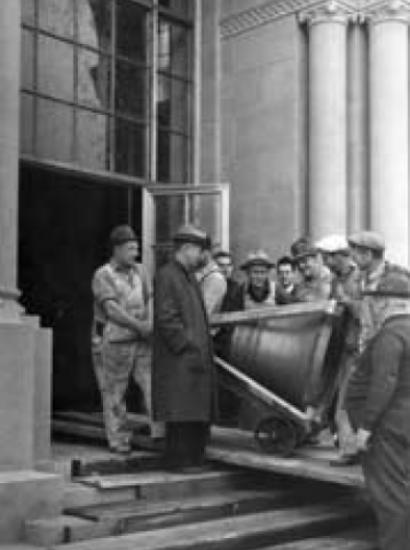 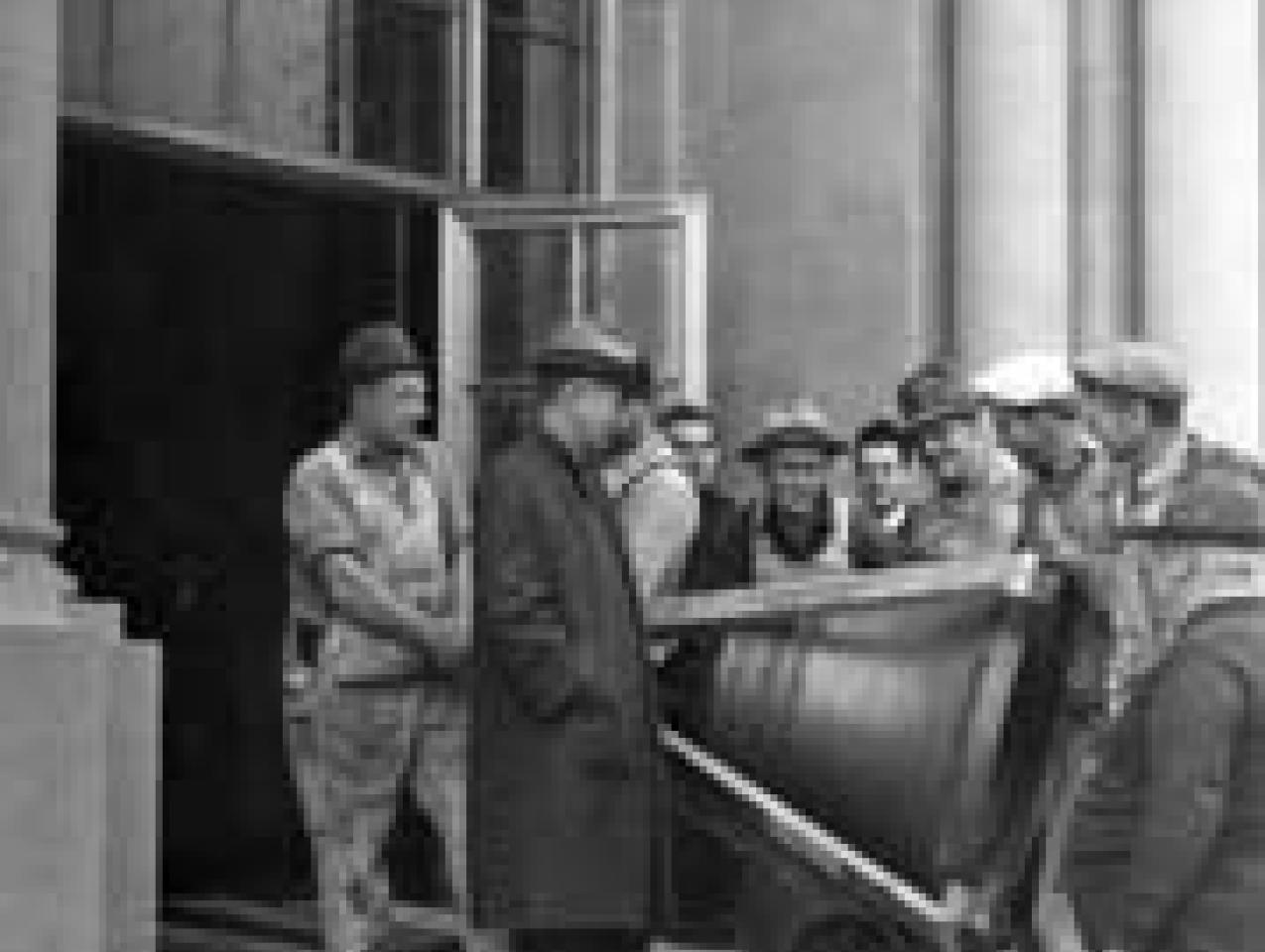 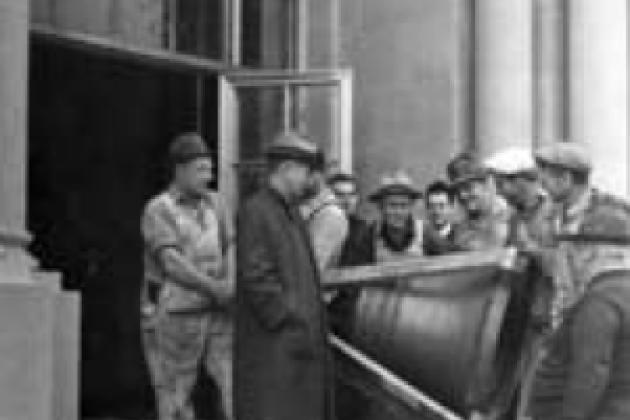 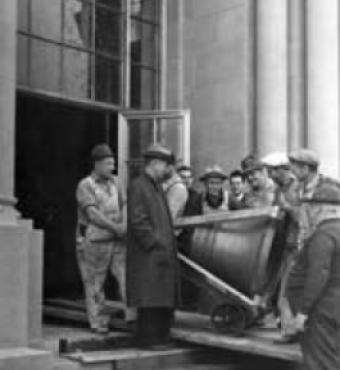 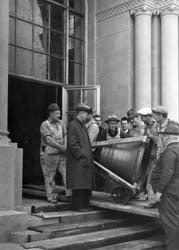 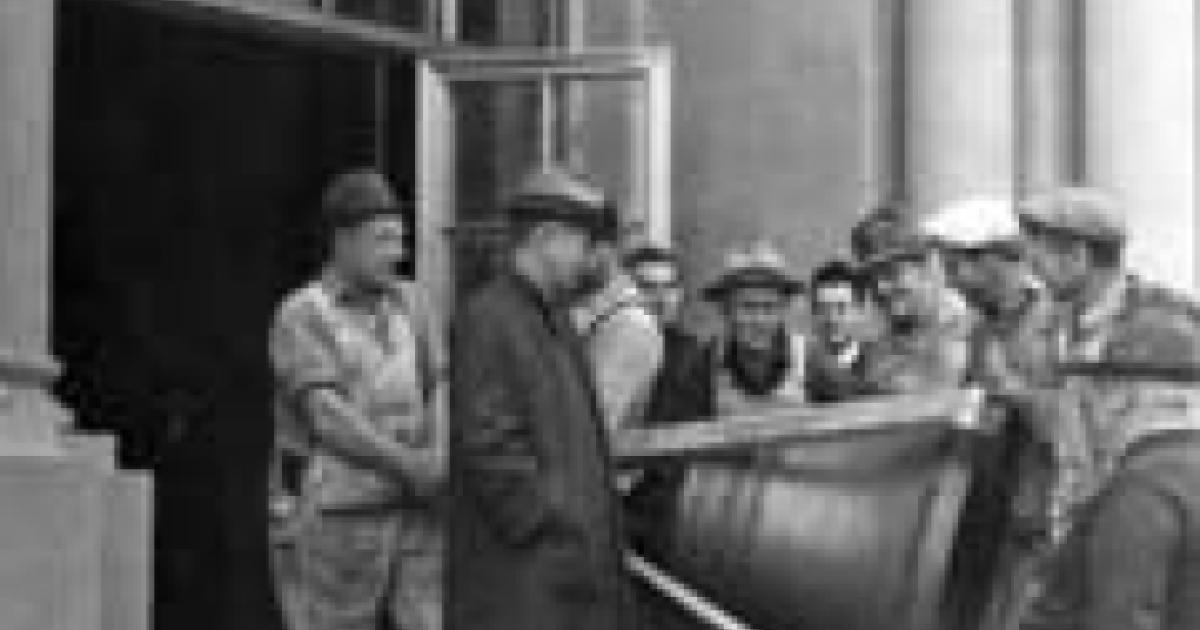 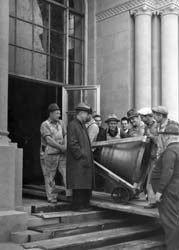 Before the carillon arrived at Stanford in 1941, the pegs in the automatic drum had been rearranged to play such Stanford songs as Hail, Stanford, Hail. The drum has been reprogrammed several times since then. Hoover InstitutionRecords

Herbert Hoover recognized that the carillon that chimed from the Belgian Pavilion of the 1939 New York World's Fair would be the most appropriate crowning symbol for the library building he was planning for Stanford. (Hoover's career in public service had begun in Belgium in 1914 with a food relief program.)

The carillon included thirty-five bells tuned to play three chromatic octaves and a wooden bench and clavier (resembling a piano with handles instead of keys) for playing the carillon manually. In addition, was a large, electrically driven drum for playing automatically. The bourdon (largest) bell bore the inscription "For Peace Alone Do I Ring," which Hoover felt captured the purpose of his library.

Hoover notified architect Arthur Brown Jr., who was designing a tower to house the Hoover collection of books and documents on the Stanford campus. The tower and the bells were in place to celebrate Stanford University's fiftieth anniversary (June 1941).

Although Brown's design has held up well over the past sixty years, after the 1989 Loma Prieta earthquake, the driving mechanism for the automatic carillon player was broken. The bells could still be played with the manual clavier and thus continued to lend a festive mood to commencement exercises and other celebrations.

James B. Angell (professor emeritus in the university's electrical engineering department) played and taught the Stanford carillon from 1960 to 1991. In 1971, Professor Angell, noting that the original bells were not tuned to exacting standards and that the weather had taken its toll, began a campaign to have the bells retuned and expanded.

It was not until 1996, however, when Stanford engineering student Nick Merz took an interest, that the project gained momentum. Merz asked current carillonneur Timothy Zerlang about the restoration of the timing mechanism of the automatic player, which had been broken during the 1989 earthquake. Their discussions eventually led to serious plans for repairing and expanding the entire carillon.

The carillon bells were removed from the Hoover Tower in January 2000 and sent to the Dutch bellfounder Royal Eijsbouts in Asten. The original Belgian foundry no longer existed. After extensive testing by the experts at Eijsbouts, the decision was made to replace eleven of the old bells with newly cast ones tuned to concert pitch. Altogether thirteen bells were added.After two years' work, the restored and expanded carillon was returned to Hoover Tower in February 2002. Cranes hoisted the bells up to the observation platform on the fourteenth floor, where workers installed them in a newly redesigned structure. During preliminary testing, the improved tonal quality was apparent. The official dedication date is set for July 2002.

Funding for the carillon restoration project was generously provided by a variety of sources including the Stanford University President's Fund, the Herbert Hoover Foundation, Herbert Hoover III and Meredith Hoover, the Musical Box Society, International, as well as individual donors. Credit is also due to the Hoover Institution administrators who worked on the project, including former Deputy Director Charles G. Palm and Facilities Manager Craig Snarr.