The Hoover Institution has launched Saints, Sinners, and Salvageables: Restoring America’s Faith in Voting, a special new podcast series with Benjamin L. Ginsberg, Hoover distinguished visiting fellow, preeminent election law expert, and nationally recognized attorney who has decades of experience representing presidential campaigns, including as counsel for George W. Bush in 2000 and 2004 and Mitt Romney in 2008 and 2012. 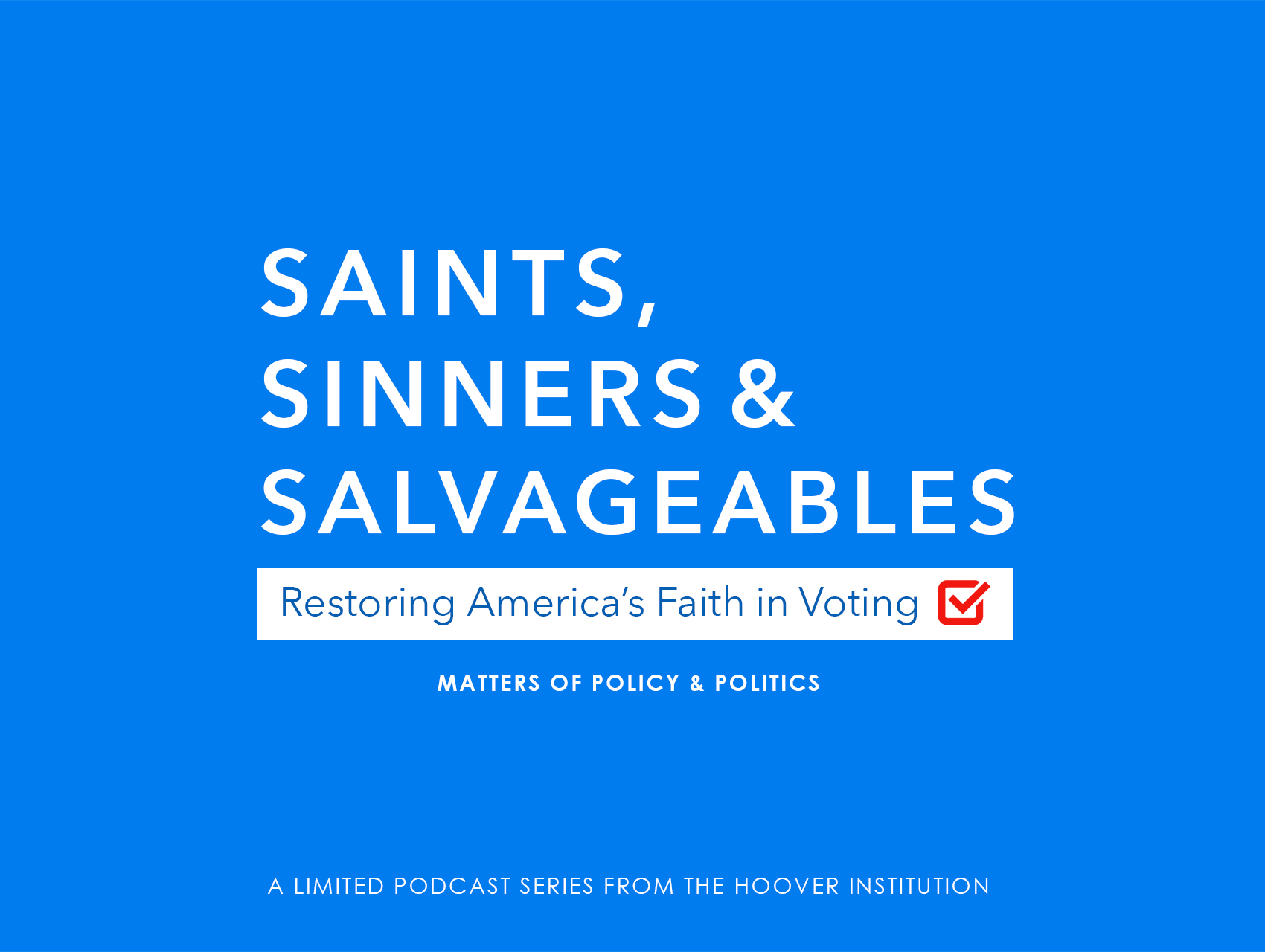 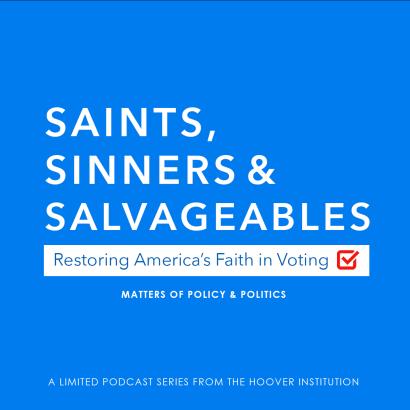 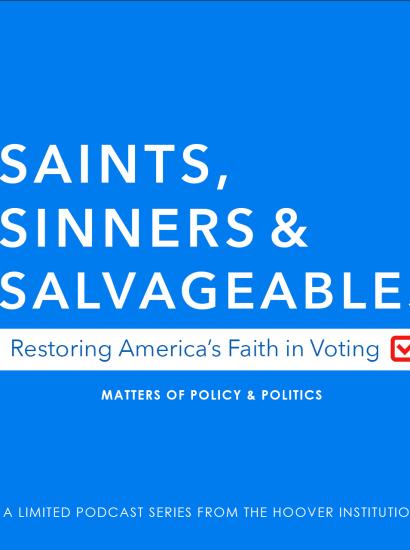 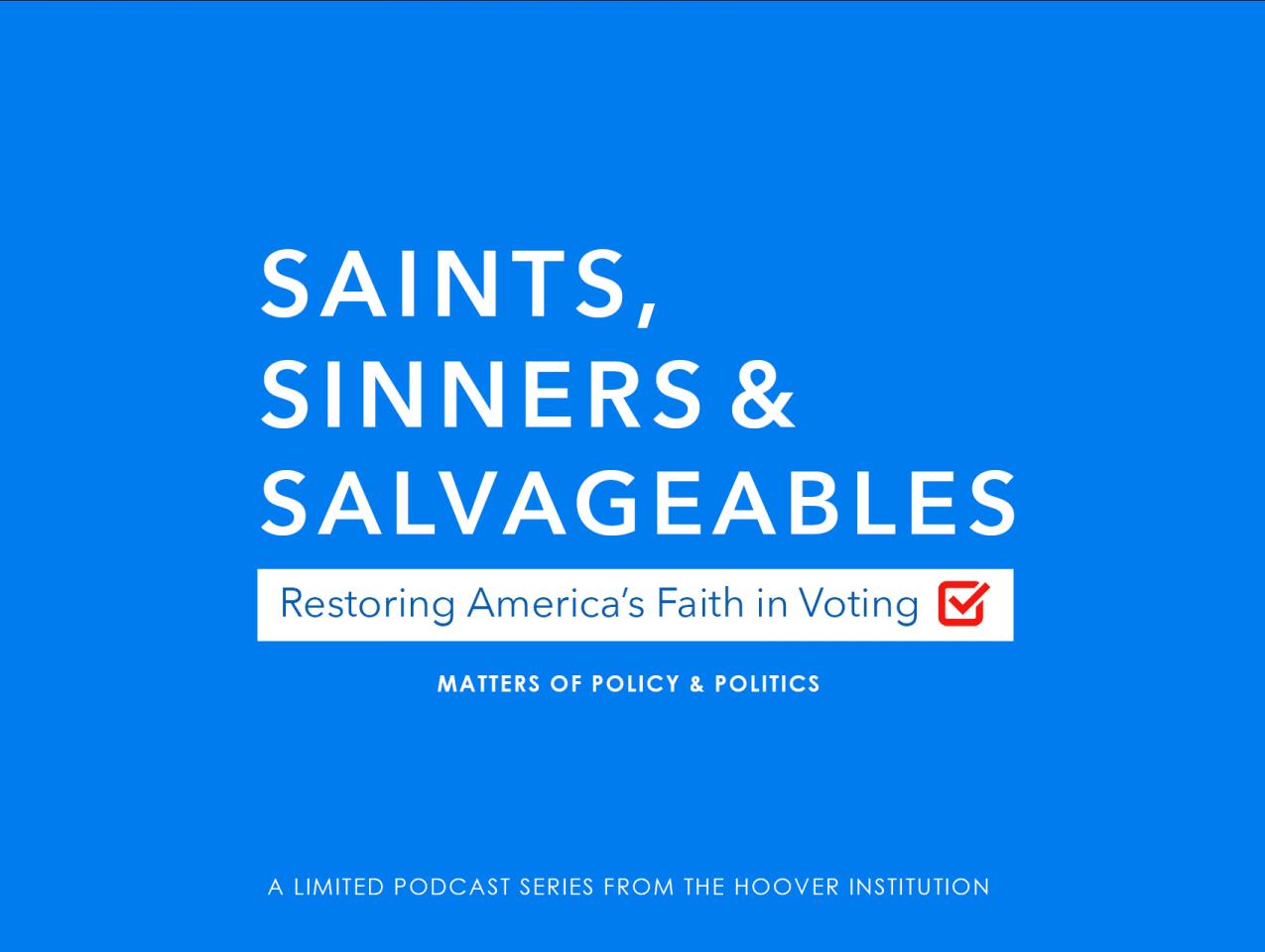 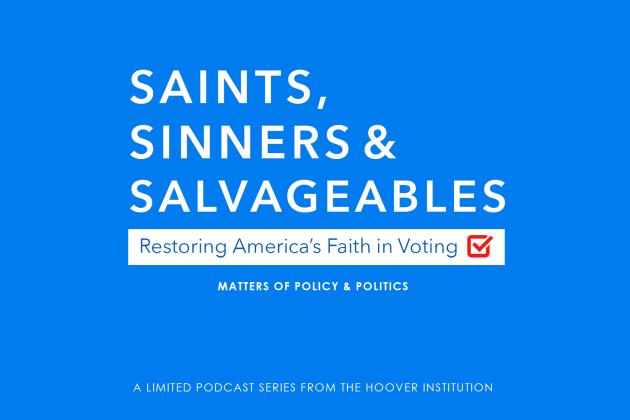 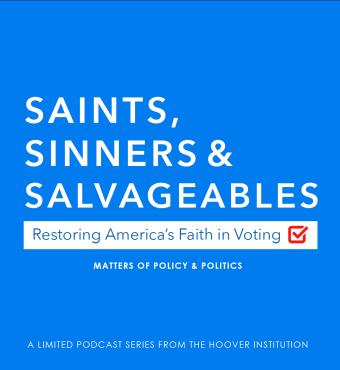 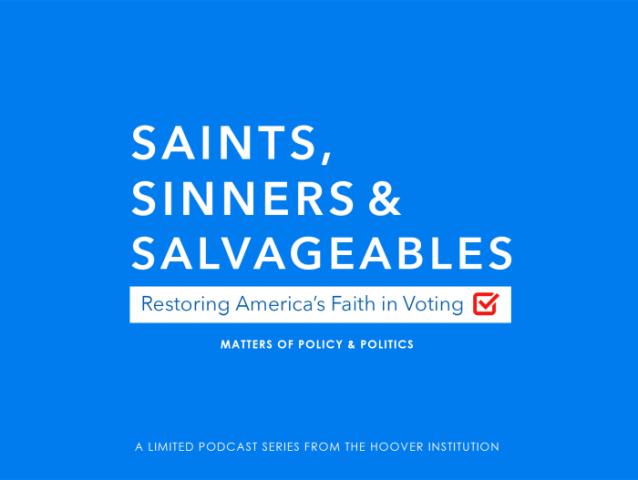 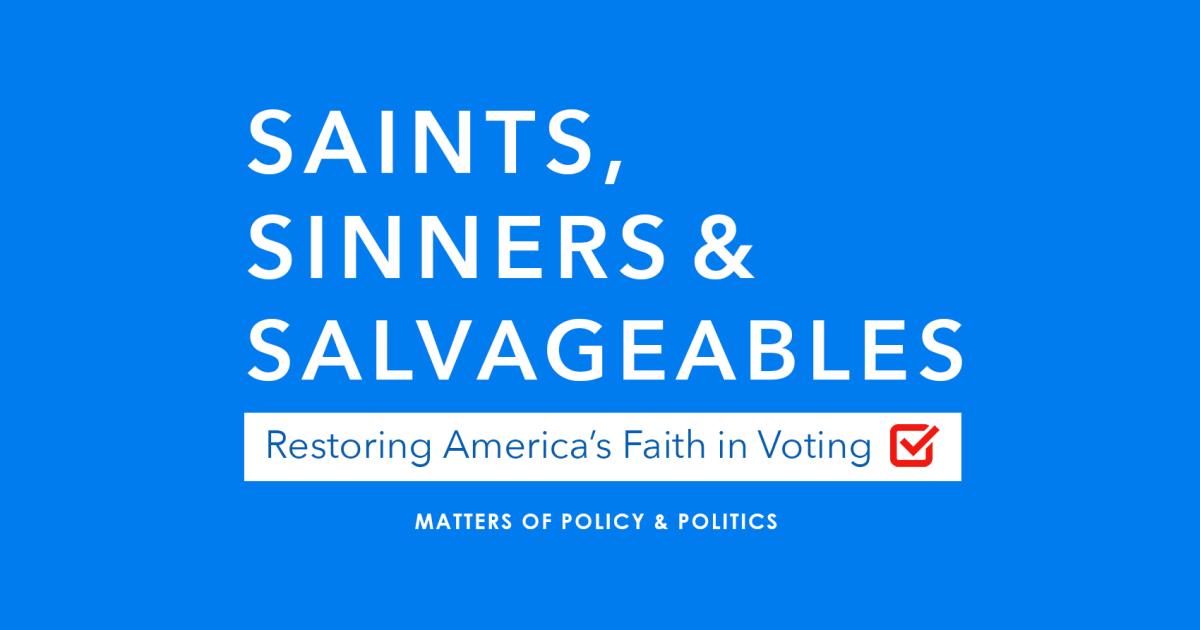 The Hoover Institution has launched Saints, Sinners, and Salvageables: Restoring America’s Faith in Voting, a special new podcast series with Benjamin L. Ginsberg, Hoover distinguished visiting fellow, preeminent election law expert, and nationally recognized attorney who has decades of experience representing presidential campaigns, including as counsel for George W. Bush in 2000 and 2004 and Mitt Romney in 2008 and 2012.

Episodes of Saints, Sinners, and Salvageables will be released every Tuesday, from August 30 through November 15. Ginsberg and guests of the show will consider a range of political perspectives of US elections, analyze the issues that are causing partisan rancor over voting processes, and provide solutions on how confidence can be restored in American democracy.

“With 30 percent of Americans saying they don’t believe elections are reliable, our experiment with democracy is under tremendous pressure. This podcast will examine our elections, how they work, and how accurate they are from viewpoints along the partisan divide,” said Ginsberg. “The focus will be on why the institution of voting matters, how elections are run, and whether they are rigged or accurate. We’ll interview those directly involved in elections to explain how votes are cast, counted, and certified; how partisans across the political spectrum use this process for their own advantage; and improvements that need to be made to keep our democracy functioning.”

Ginsberg explained that the podcast’s title, Saints, Sinners, and Salvageables, is meant to be a bit of a Rorschach test that succinctly describes the contentious political environment shaping American voting.

“Who the ‘saints’ and ‘sinners’ are depends very much on which side of the ideological divide you sit in our highly polarized country,” said Ginsberg. “To those who believe in the accuracy of elections, ‘saints’ are voters who think that the officials leading election processes throughout America act transparently, are diligent in their work, and are committed to the ideal that voting outcomes reflect the will of the people. ‘Sinners’ are politicians and activists who seek to take advantage of election processes and weaponize them to achieve their preferred results. To those who doubt election results, it’s the opposite – ‘saints’ see a fatally flawed election system that needs to be replaced with ‘sinners’ as those who deny that.”

Ginsberg added, “‘salvageables’ are people that may be currently sympathetic to arguments about alleged deficiencies in voting integrity but, after being properly informed about the free and fair nature of US voting, can be persuaded to support electoral institutions, and help strengthen American democracy.”

In an episode kicking off the series, Ginsberg is interviewed by Bill Whalen, the Hoover Institution’s Virginia Hobbs Carpenter Distinguished Policy Fellow in Journalism.

Upcoming episodes will explore topics including the institution of voting in America, the importance to democracy of public faith in elections, the rise of election denial, and debates about whether citizens’ votes are being counted and if elections have reliably reflected the will of the people.

Saints, Sinners, and Salvageables was inspired by a conference held in June 2022 at Stanford University, convened by Ginsberg with the support of his Hoover Institution colleagues and experts from the Election Official Legal Defense Network. At the event, speakers offered historical perspectives on the consequences of rising mistrust in democratic elections. They also explained how administrators can employ best practices and effectively communicate them to the public in order to shore up confidence in voting processes.

Ginsberg’s representations have ranged across a variety of election law and regulatory issues, including voting issues and elections, federal and state campaign finance laws, recounts and contests, government investigations, election administration, and redistricting. He served as cochair of the bipartisan Presidential Commission on Election Administration, which produced a much-lauded report on best practices and recommendations for state and local officials to make US elections run better. He is the co-chair of the Election Officials Legal Defense Network.

His academic background includes being a lecturer in law at Stanford Law School, an adjunct professor at the Georgetown University Law Center, and a fellow at the Harvard Institute of Politics. He appears frequently on television as an on-air commentator about politics and the law, and he has written numerous articles on US politics.

He served as national counsel to the 2000 and 2004 Bush-Cheney presidential campaigns and played a central role in the 2000 Florida recount. In 2008 and 2012, he served as national counsel to the Romney for President campaign. He has represented the campaigns and leadership PACs of numerous members of the Senate and House as well as national party committees, governors, and state officials. He was a partner at Jones Day from 2014 to 2020 and, before that, at Patton Boggs for 23 years.

Prior to entering law school, Ginsberg spent five years as a newspaper reporter at the Boston Globe, the Philadelphia Evening Bulletin, the Berkshire Eagle (Massachusetts), and the Riverside Press-Enterprise (California).