In a conversation with Condoleezza Rice in the Hoover Institution’s Hauck Auditorium, former New York Times Washington correspondent Philip Taubman discussed his new book, In the Nation’s Service: The Life and Times of George P. Shultz, a biography of the distinguished public servant and four time cabinet official who, as US secretary of state, played a decisive role in ending the Cold War. 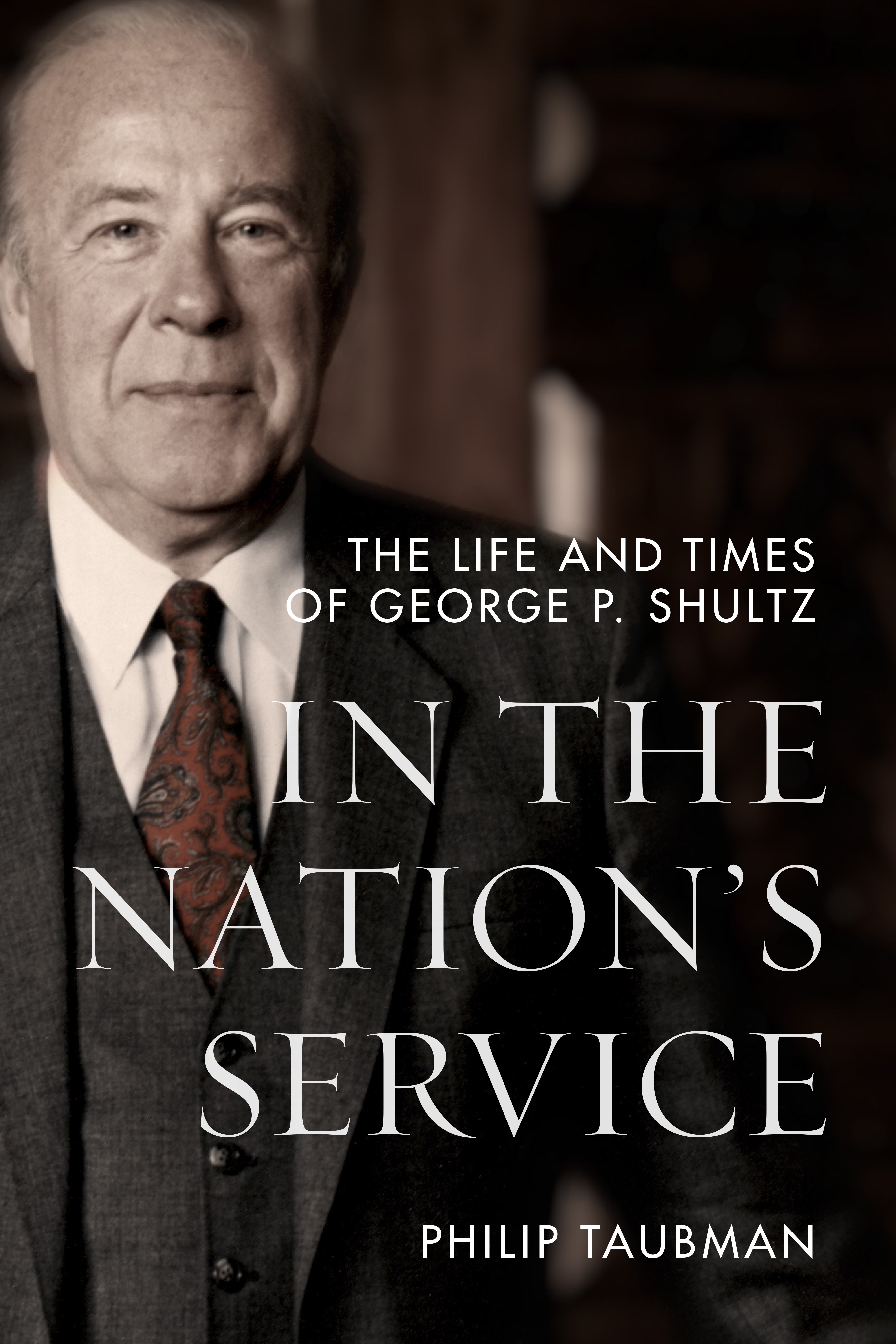 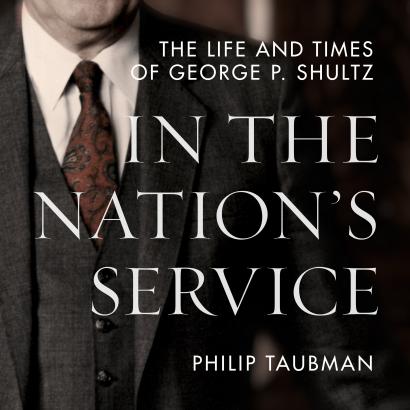 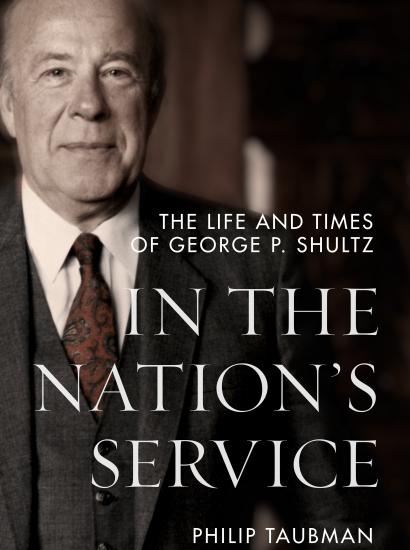 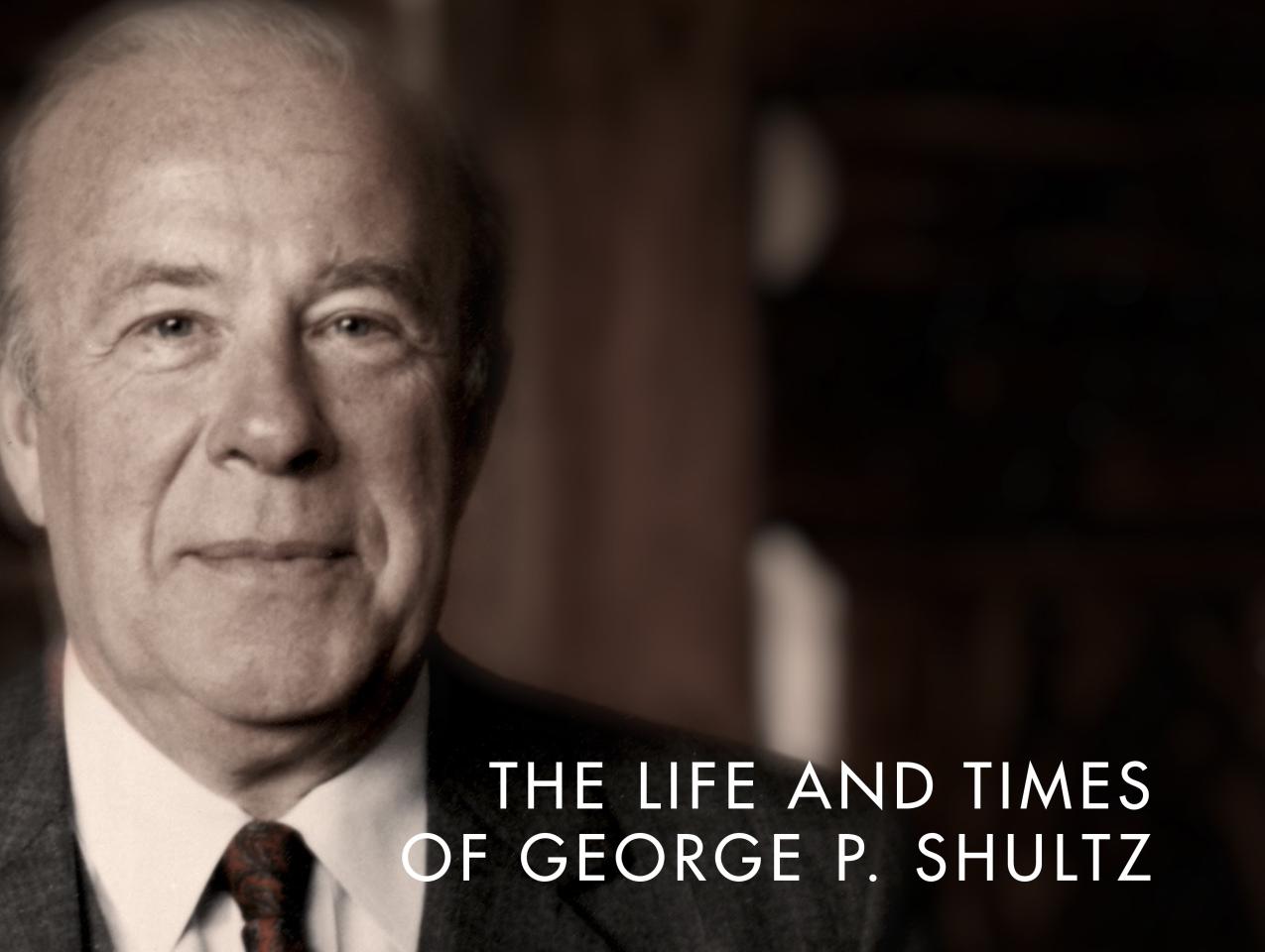 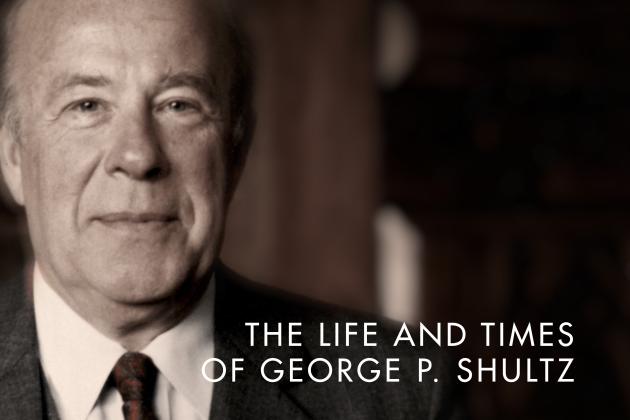 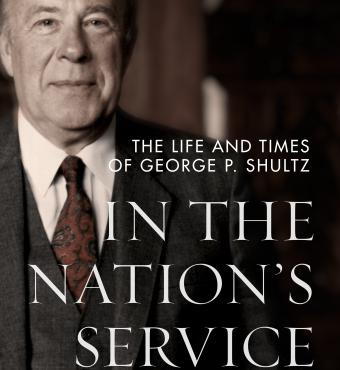 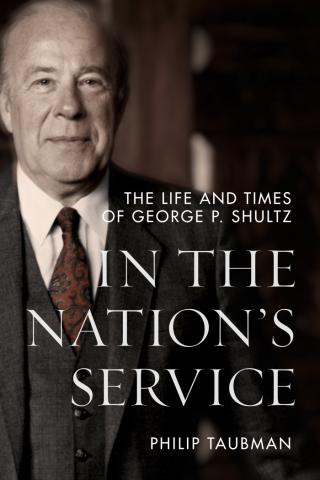 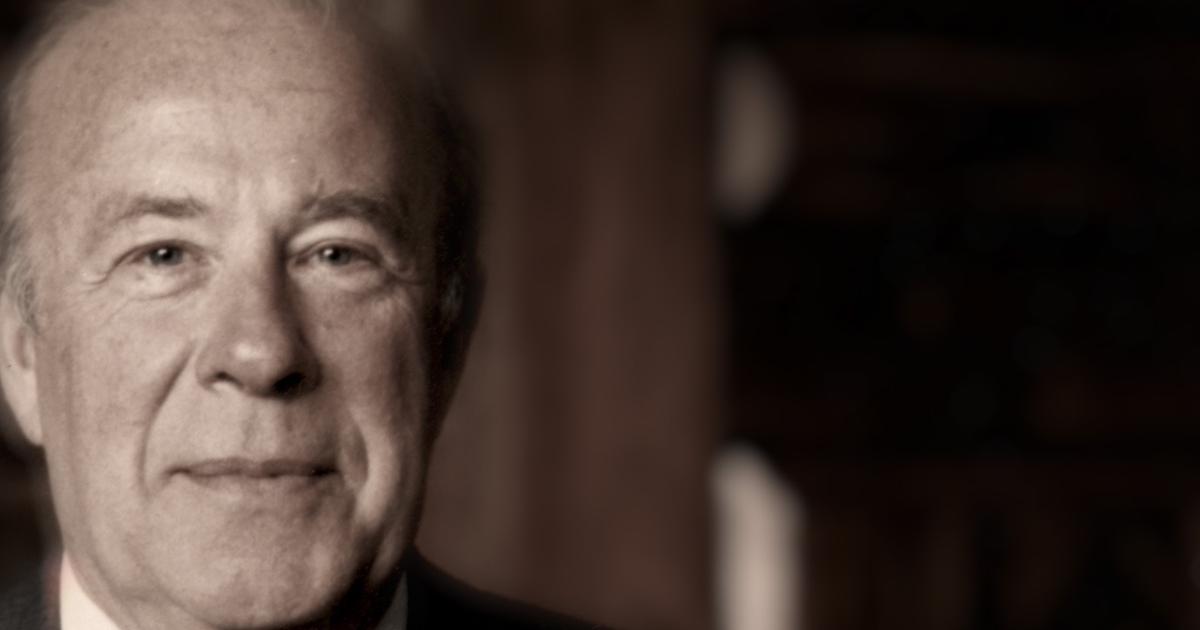 Hoover Institution (Stanford, CA) – In a conversation with Condoleezza Rice in the Hoover Institution’s Hauck Auditorium, former New York Times Washington correspondent Philip Taubman discussed his new book, In the Nation’s Service: The Life and Times of George P. Shultz, a biography of the distinguished public servant and four time cabinet official who, as US secretary of state, played a decisive role in ending the Cold War.

Now a senior lecturer at Stanford’s Center for International Security and Cooperation, Taubman first met Shultz on board an Air Force plane to Asia when Shultz was Secretary of State in the 1980s. In researching for this comprehensive biography, Taubman was given exclusive access to Shultz’s personal papers at the Hoover Library & Archives.

In discussing the character of his subject, Taubman said that Shultz had all the qualities of a great statesman: focused, steady, and resilient, Shultz never gave away what he was thinking. He was also very patient and intentional in his willingness to understand differing perspectives of both colleagues and counterparts.

Throughout his career in public service, Shultz had a reliable strategy for achieving common ground between parties who had previously been opposed to each other. He would ask people not to focus too much on their respective positions but instead to explore ways to solve problems that impact all sides.

This strategy played a decisive role in ending the Cold War. But it also proved to be useful in countering one of America’s most vexing domestic challenges two decades earlier.

Taubman explained how, despite the landmark 1954 Supreme Court ruling in Brown v. Board of Education declaring segregation to be unconstitutional, by the late 1960s nearly 70 percent of Black children attended segregated schools in the nation’s South. Solving this problem was given greater urgency by the high court in 1968, when it upheld a federal district court decision mandating that North Carolina’s Charlotte-Mecklenburg School District implement a busing plan to achieve racial balance in all its schools. The decision also had implications in other districts where schools didn’t meet the court’s standards of integration. In October 1969, the Supreme Court ruled that integration could no longer be slow-walked; the unjust practice had to end immediately.

The newly inaugurated president Richard Nixon had appointed Shultz to be secretary of labor earlier that year. To carry out the October 1969 ruling, Nixon established a special cabinet committee, of which Vice President Spiro Agnew would serve as chair and Shultz as deputy. But because Agnew had little interest in this issue and wasn’t an active participant on the committee, Shultz became its de facto head.

Taubman described how Shultz invited biracial delegations—evenly split between Black and White community leaders—from each of the southern states, beginning with Mississippi, to come to Washington to discuss solving the problem. At the start of each session, Shultz indicated that he expected the delegations to determine a path toward voluntary peaceful desegregation of schools, or the federal government would have to step in and enforce the law of the land.

Taubman said that although Shultz’s leadership didn’t provide a long-term solution for equitable education, the work of the committee was stunningly successful in the short run. By fall of 1970, 75 percent of southern schools were peacefully desegregated.

Taubman’s New York Times colleague Tom Wicker, by no means a political conservative or supporter of the Republican Party, lauded the Nixon administration’s policy. “Tom wrote in one of his books that this was a miracle that had been achieved by George Shultz,” Taubman said.

Taubman also explained how, as a conservative labor secretary, Shultz built strong relationships with union leaders, in particular AFL-CIO president George Meany. Taubman told a story of Meany’s desire to attend President Dwight D. Eisenhower’s funeral in March 1969. Over objections from many officials within the Nixon administration, Shultz made sure that Meany had a seat at the service.

“Meany was touched by that gesture,” Taubman said. "Those are the kinds of things that George did. It was these little personal gestures that had a multiplier effect on his effectiveness.”

Strategic Diplomacy with the Soviet Union

An economist by training and trade and having little foreign policy experience aside from a segment of his portfolio as secretary of the Treasury, Shultz was an unlikely choice to be selected by President Ronald Reagan as secretary of state following the resignation of General Alexander Haig in 1982.

Taubman explained that Shultz knew that his success in the position depended on building a strong relationship with the president. His predecessor Cyrus Vance had been overshadowed by aides of President Jimmy Carter who had proximate access to the Oval Office, most notably national security advisor Zbigniew Brzezinski.

Taubman told Rice that upon Shultz’s unanimous confirmation in June 1983, he too was confronted with political turf wars involving more hawkish members of the administration, among them Secretary of Defense Caspar Weinberger and National Security Advisor William Clark, both of whom had worked closely with Reagan since his days as California governor.

Shultz had struggled to achieve influence with Reagan and grew frustrated at meetings where he was drowned out by these more powerful voices. At the time, Shultz stressed that broader engagement with Soviet leaders was necessary to prevent escalation of war with a country armed with thousands of nuclear warheads.

However, a breakthrough occurred in February 1983. A snowstorm forced the Reagans to cancel a planned weekend trip to Camp David. Instead, First Lady Nancy Reagan decided to entertain at the White House, inviting both Shultz and his wife, Helena, for an intimate dinner in the family quarters.

“For the first time, George Shultz has a conversation with Ronald Reagan about the Soviet Union without interference from other aides, and he discovers that night that he and Reagan are in agreement,” Taubman explained. “There is a dire need to improve relations with the Soviet Union.”

Shultz emerged to be in command of US foreign policy. His newfound influence with Reagan was on full display after Moscow shot down a Korean Airline Flight that had drifted into Soviet air space, killing all 269 people on board, including US Congressman Larry McDonald.

Although the Russians had mistaken the KAL flight with an American reconnaissance plane, their action nevertheless did severe damage to their reputation and risked undermining their campaign to dissuade NATO members from installing enhanced nuclear weapons on their soil. Shultz concluded that the incident could be linked to arms negotiations with Soviet leaders.

The emergence of the reform-minded Soviet leader Mikhail Gorbachev in 1985 marked a departure from the Politburo’s historic hard-line ideology. Gorbachev was a firm believer in the Soviet Union, Taubman said, but was well aware of his country’s shortcomings.

After attending the funeral of General Secretary Konstantin Chernenko in 1985, Shultz met with Gorbachev and concluded that he was a man whom President Reagan could work with to bring a peaceful end to the Cold War. Schultz was also able to forge what Taubman called a “constructive bond” with Foreign Minister Eduard Shevardnadze. Shultz and Shevardnadze played leading roles in the three summit meetings that would culminate in the Intermediate-Range Nuclear Forces Treaty in 1987. The treaty marked the first time an entire class of weapons was abolished. Taubman described a letter Shevardnadze sent to Shultz, now housed in Hoover’s Library & Archives, in which the Soviet foreign minister wrote that the two were “kindred souls.”

Taubman described Shultz as a man of enormous curiosity. Though Shultz served in prominent positions in both government and business, he felt most accustomed to being an academic.

He remained very active in public policy during his thirty years as a fellow at the Hoover Institution. He continued to devote himself in service to the nation and as an elder statesman advised leaders on how best to face challenges confronting America and the world.

Shultz teamed up with US senator Sam Nunn, former secretary of defense William Perry, and former secretary of state Henry Kissinger for a series of influential op-eds in the Wall Street Journal that envisioned a world without the threat of nuclear weapons.

Taubman also described Shultz’s concern over the risks of global climate change and his commitment to do his part in reducing global temperatures. To this end, he convened a group of experts to study the issue and devised a revenue-neutral carbon tax that would encourage producers and consumers to use energy resources that emit less carbon dioxide.

“I find myself thinking about George and all of the things that he did in his service to the nation, and the word that keeps coming to my mind is patriot,” Taubman concluded, adding, “I think if you really want to understand what American patriotism is all about, look at the life of George Shultz.” 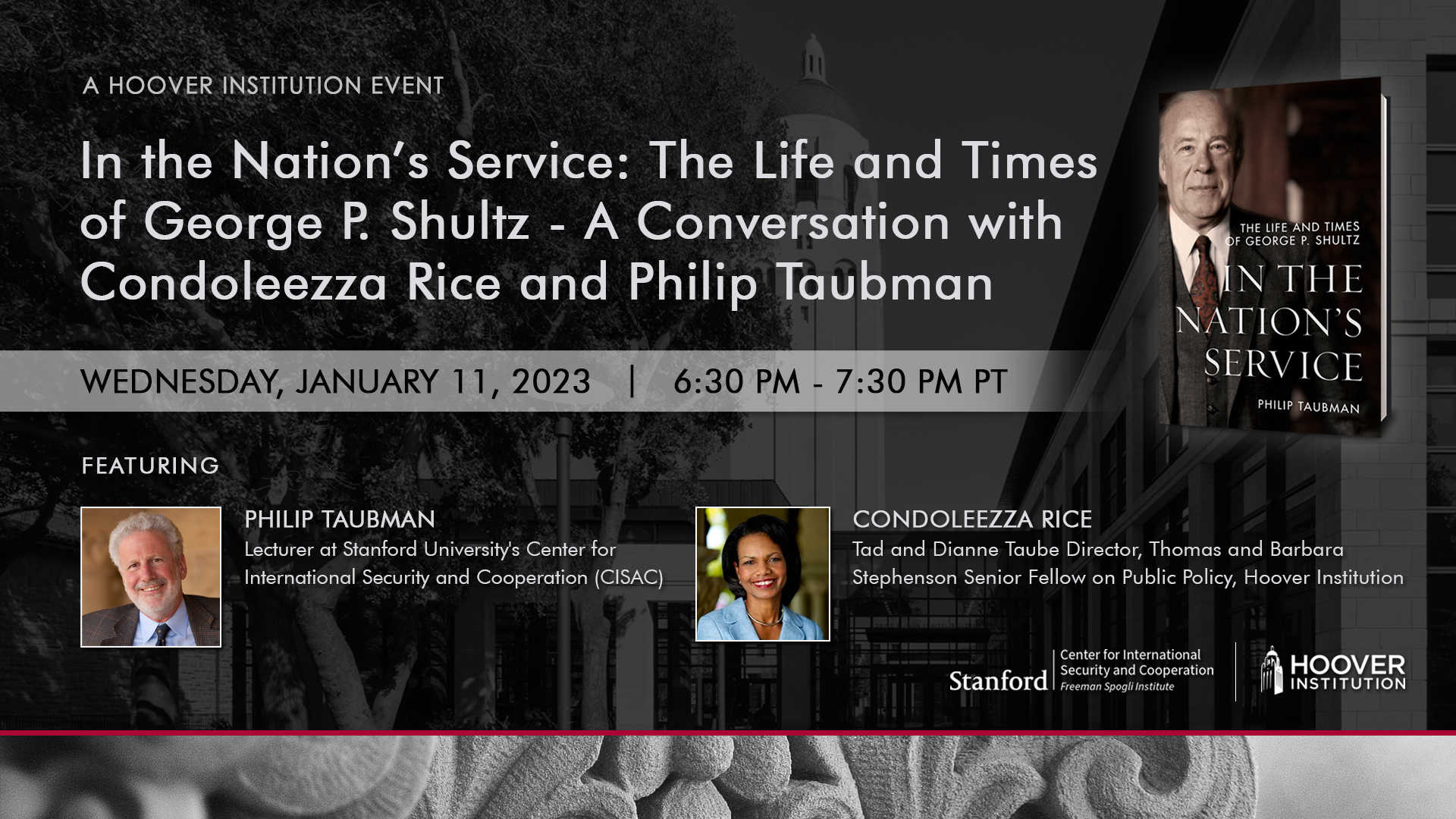 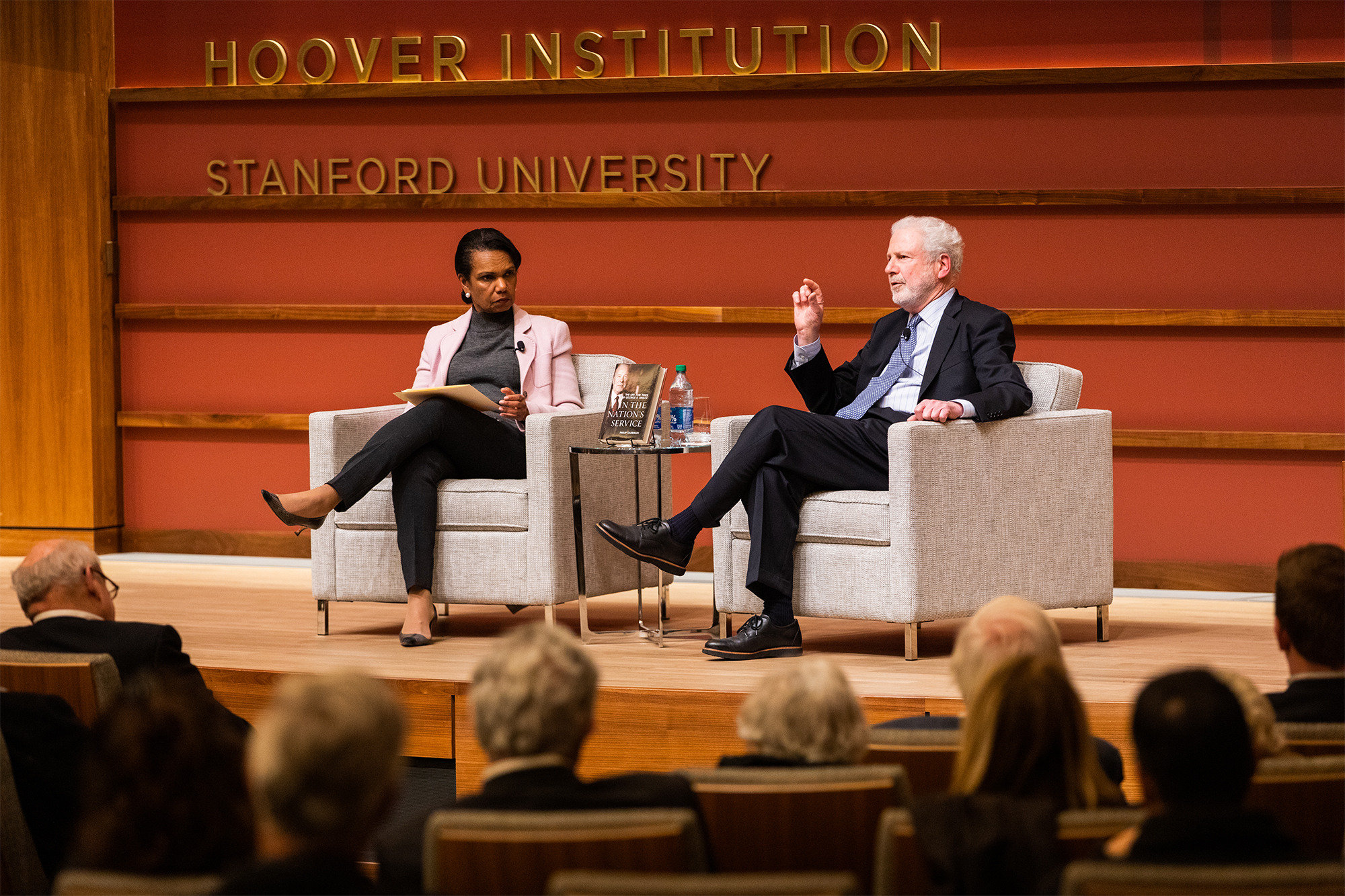 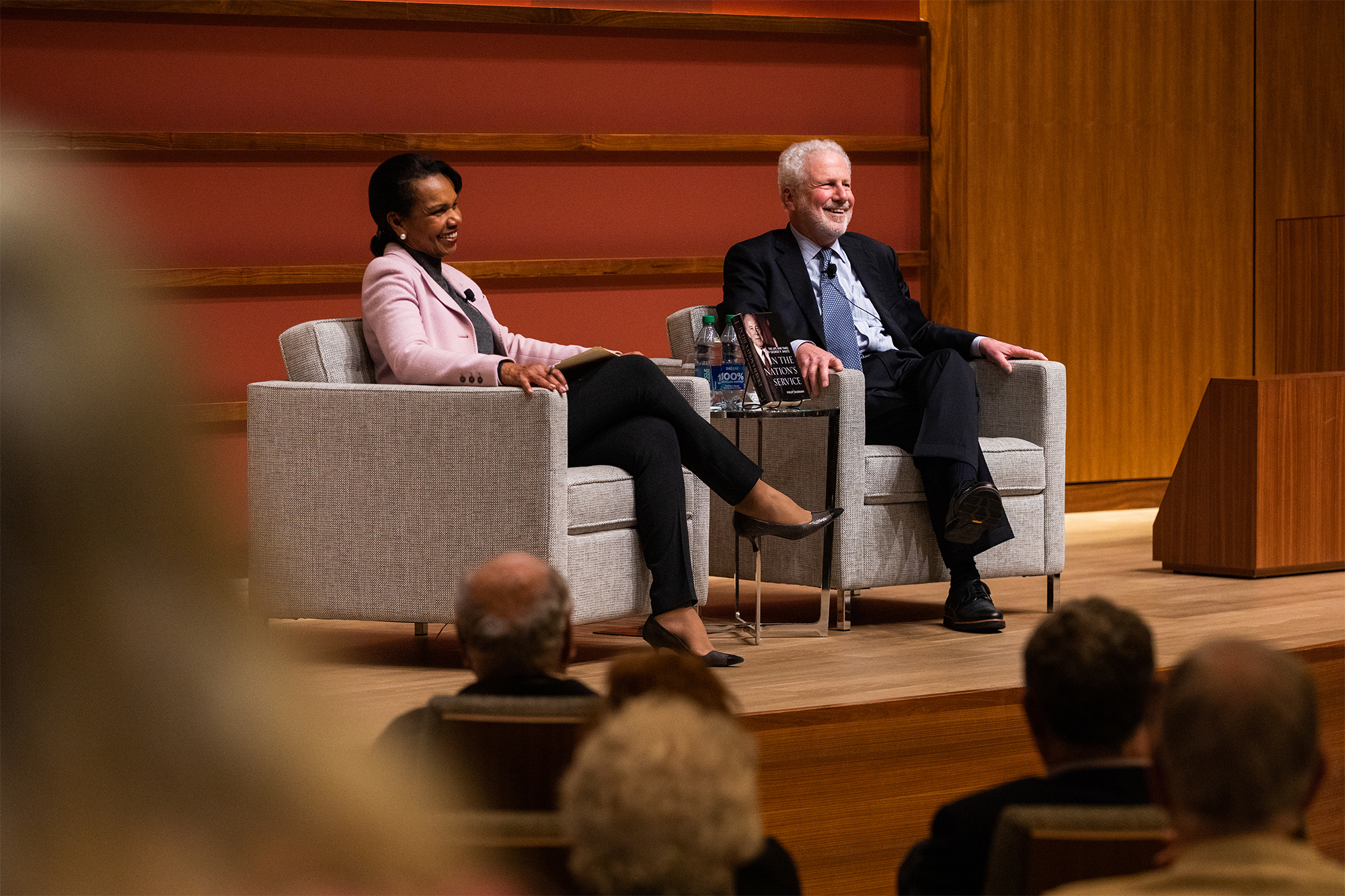 Philip Taubman, now a senior lecturer at Stanford’s Center for International Security and Cooperation, answered questions from an audience in Hauck Auditorium about George Shultz’s policy perspectives and his own experience as Shultz’s biographer. 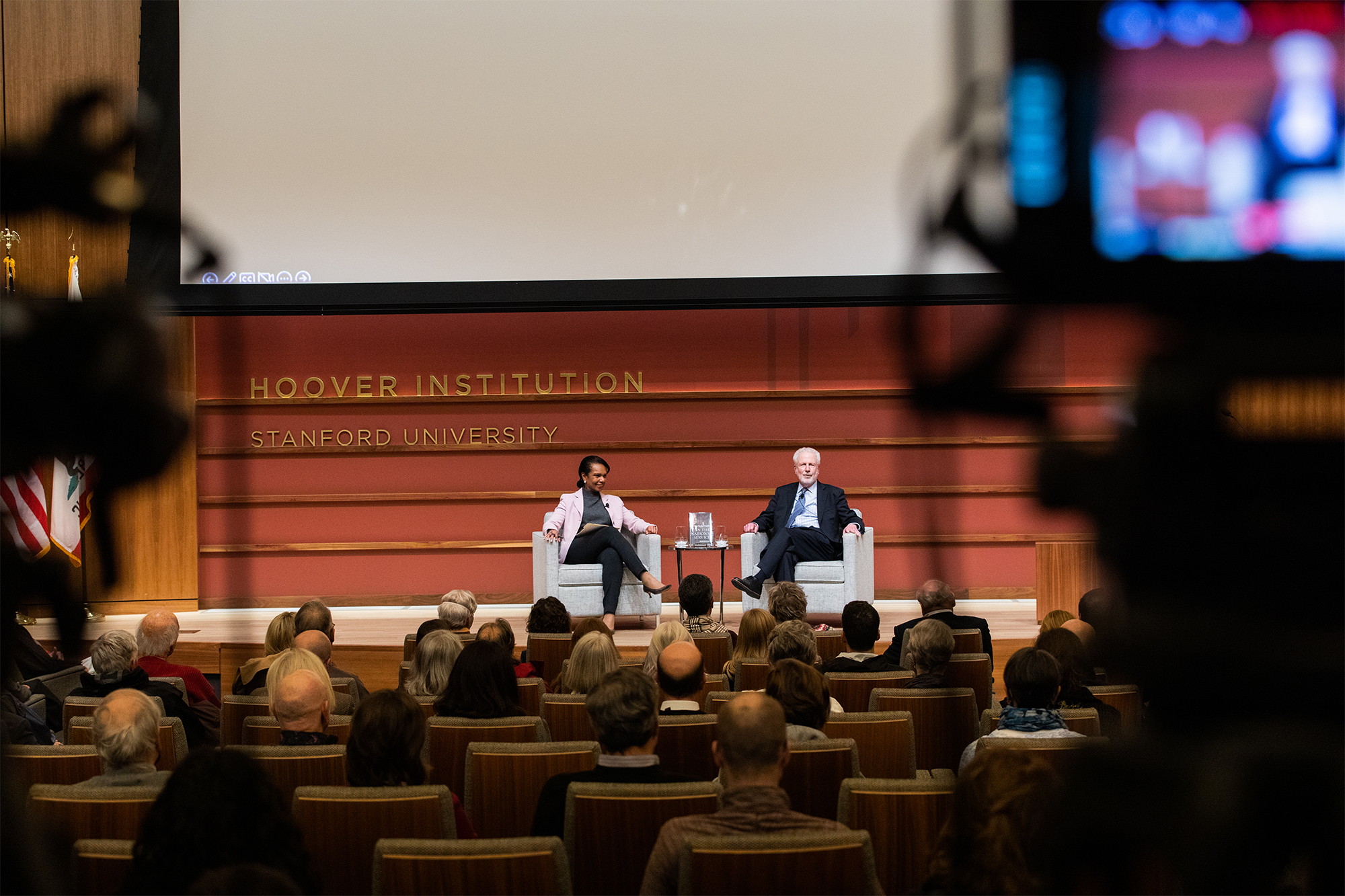 Members of the Stanford community attended a conversation in Hauck Auditorium between Condoleezza Rice and former New York Times correspondent Philip Taubman. In writing In the Nation’s Service, Taubman was given full access to George P. Shultz’s personal papers, held at the Hoover Institution Library & Archives. 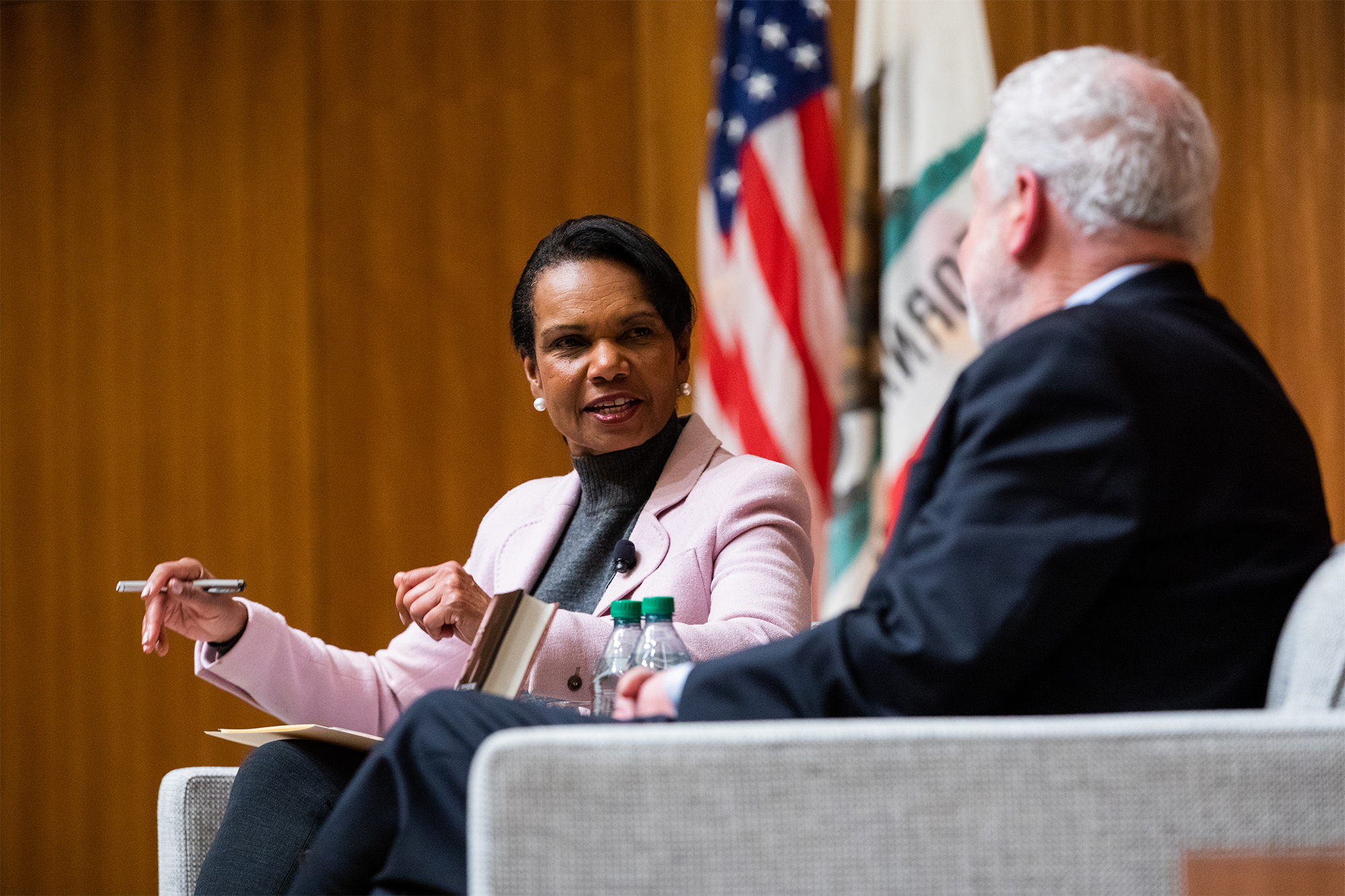 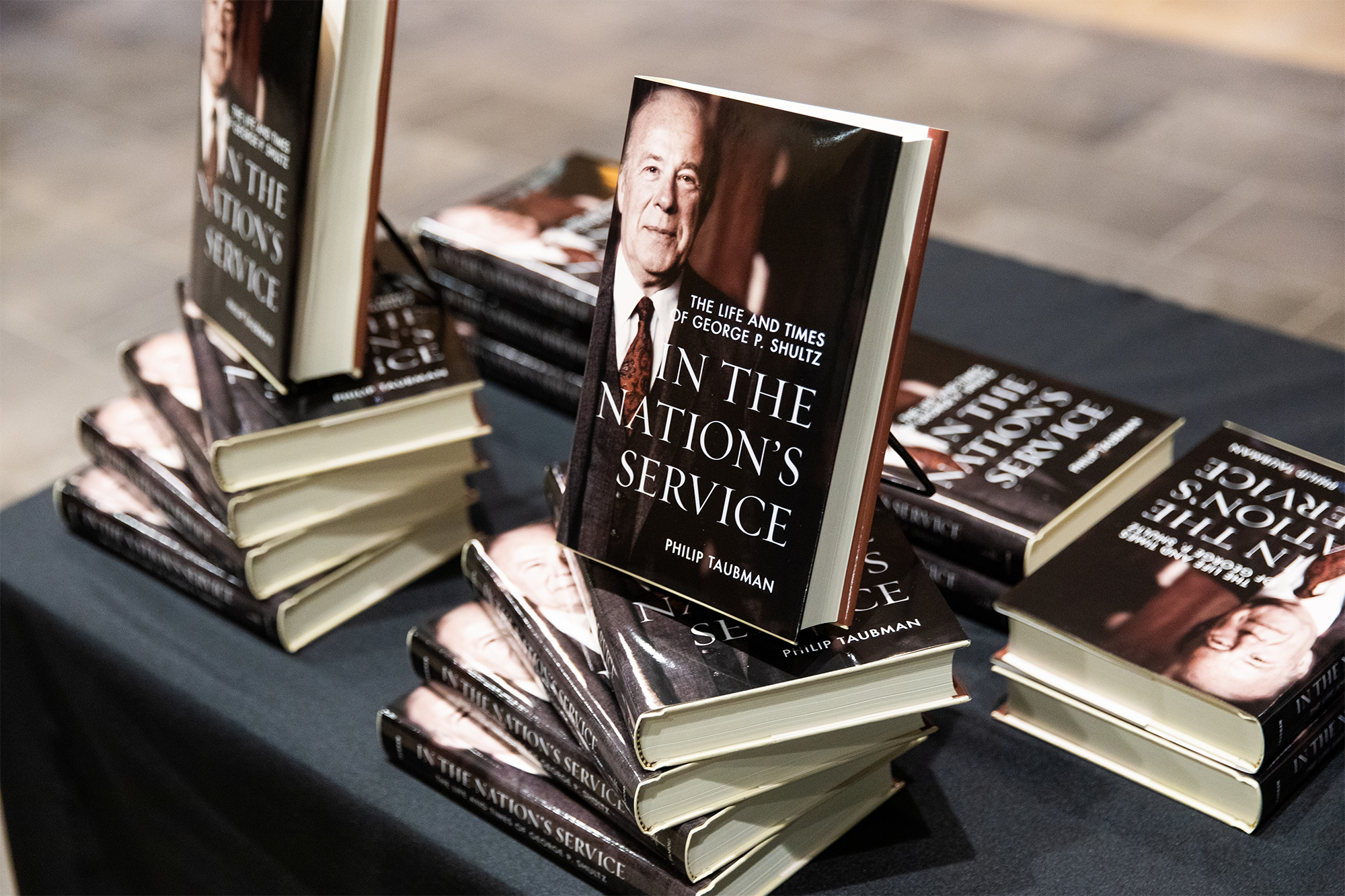 In the Nation’s Service: The Life and Times of George P. Shultz was published on January 10, 2023. 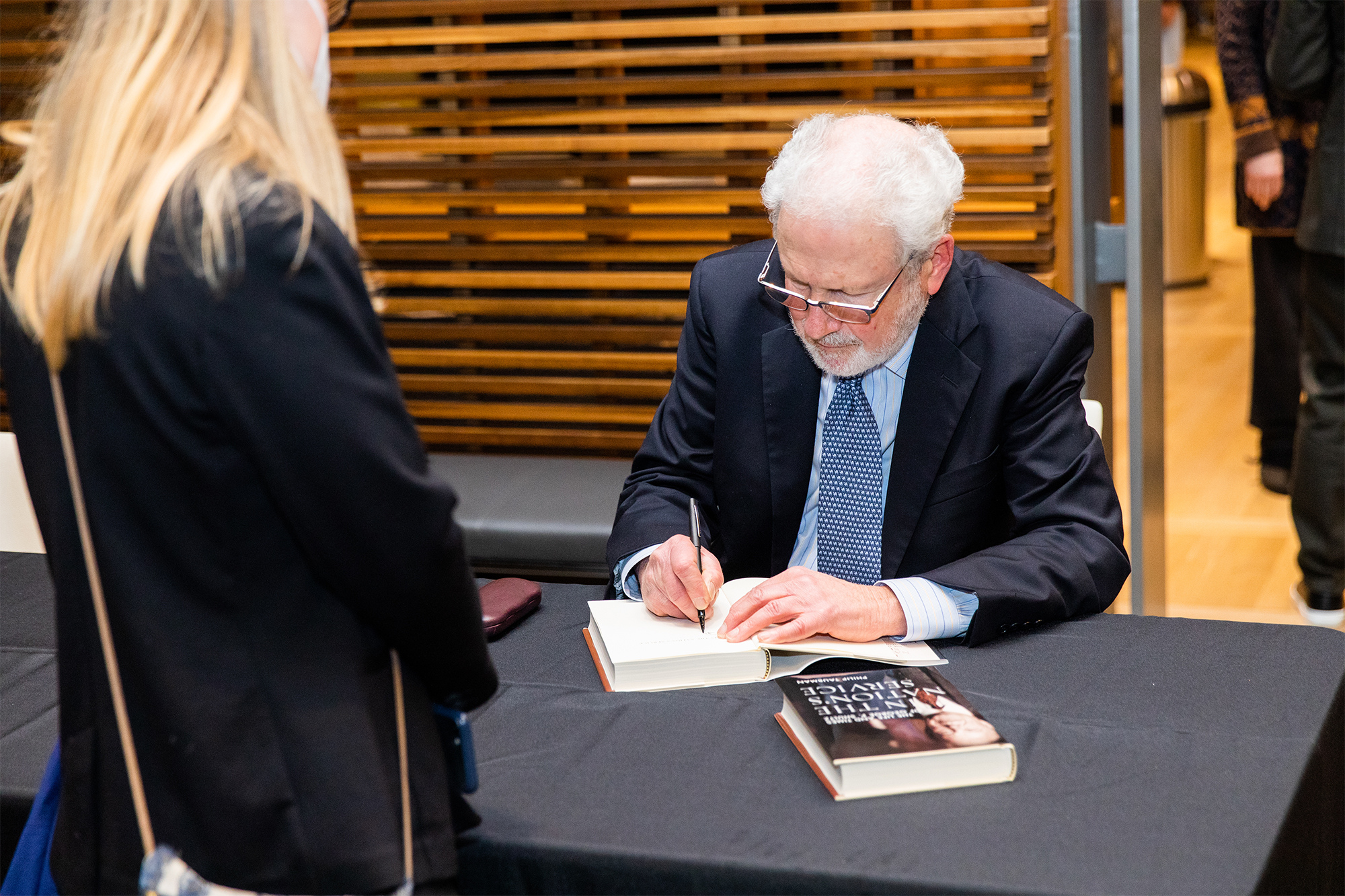 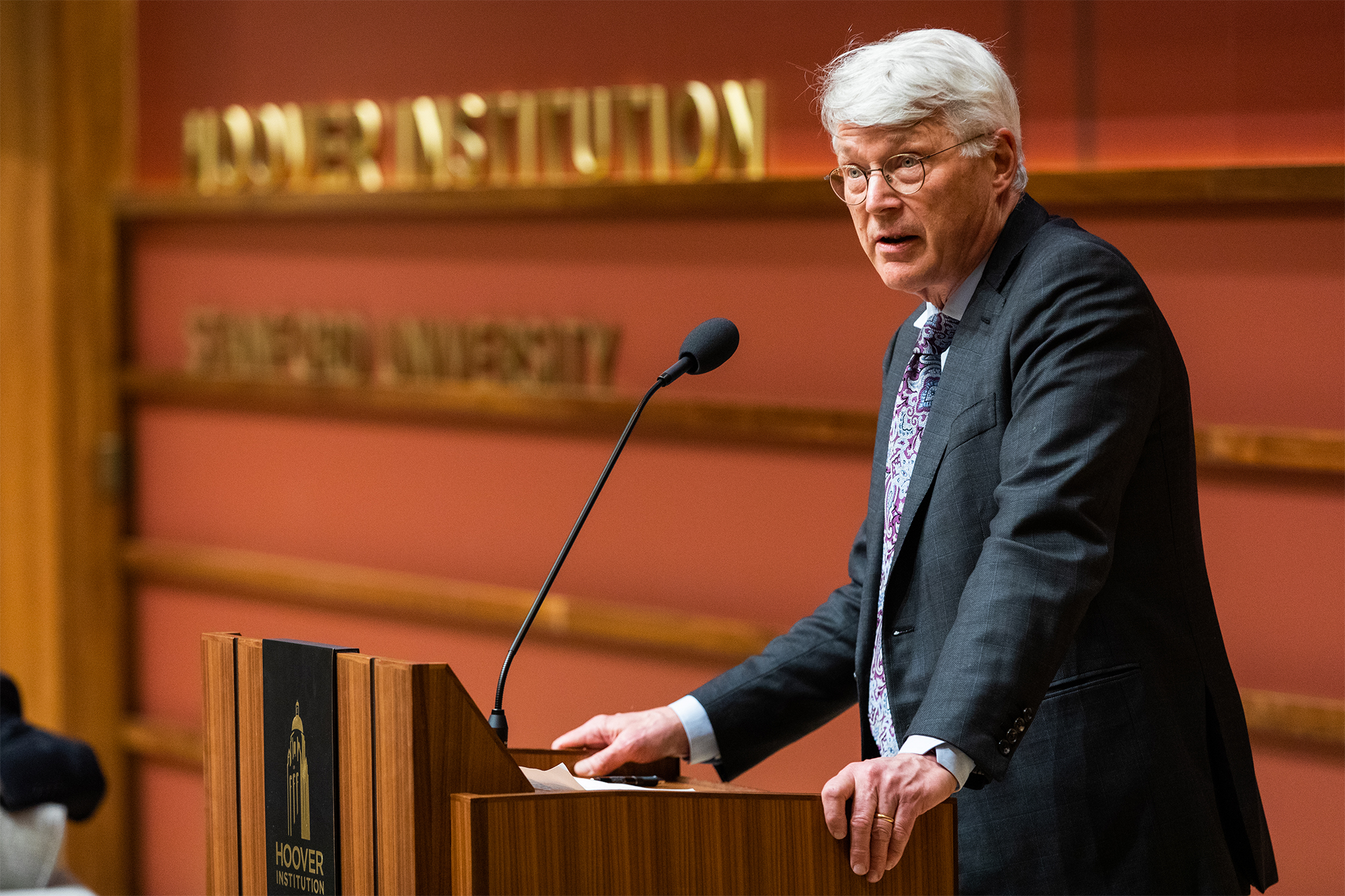 Scott Sagan, Stanford professor of political science and codirector of the Center for International Security and Cooperation, introduced the conversation between Condoleezza Rice and Philip Taubman.