Summer 2012 Board of Overseers’ Meeting at the Hoover Institution

The Hoover Institution hosted its annual Board of Overseers’ summer meeting during July 10–12, 2012. The program began on Tuesday evening with two dinner presentations hosted by John Raisian. Hoover fellows Daniel Kessler and Michael McConnell discussed “Health Care and the Constitution,” with McConnell beginning by speaking to the current health care situation as affected by the Supreme Court’s ruling on the Affordable Care Act and explained the difference between mandates enforced by a penalty versus a tax. Kessler spoke about changing the subsidy formula, Medicaid and Medicare, and the need to “get costs down.” Friday, July 13, 2012 6 min read 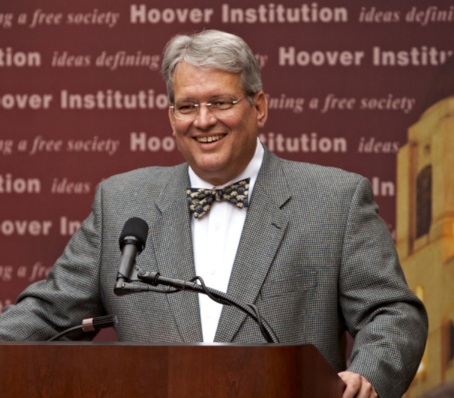 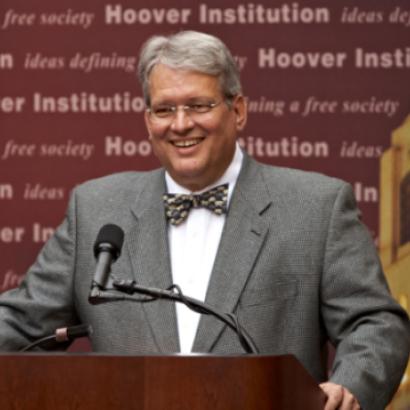 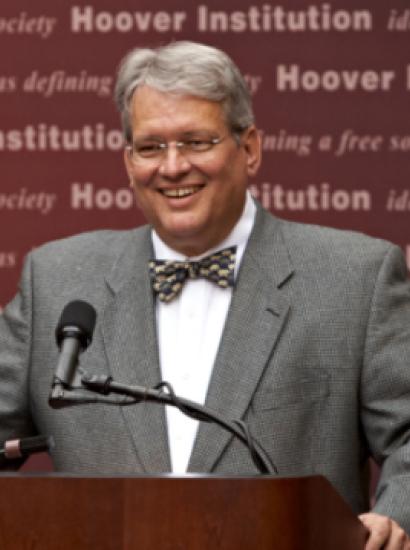 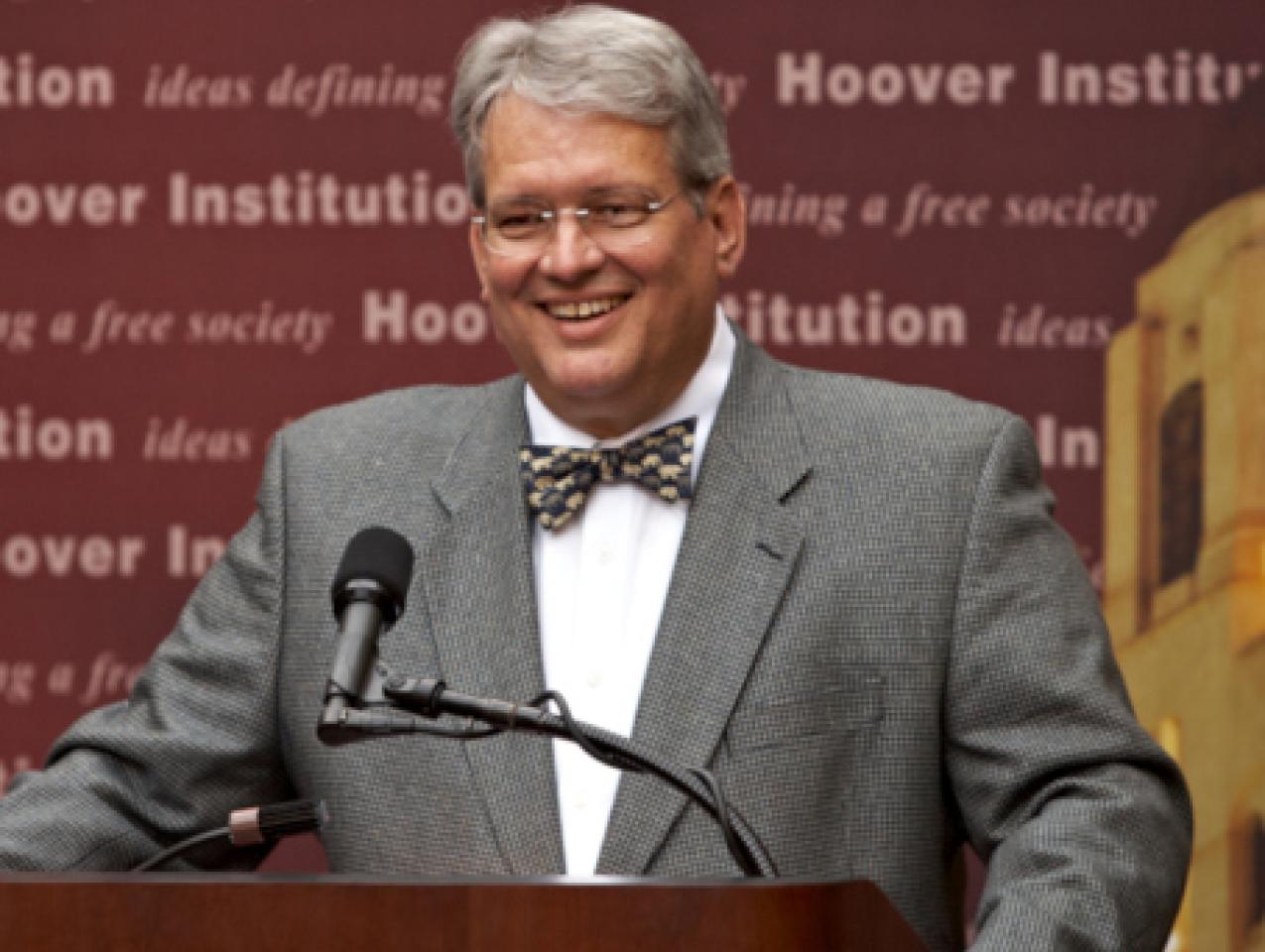 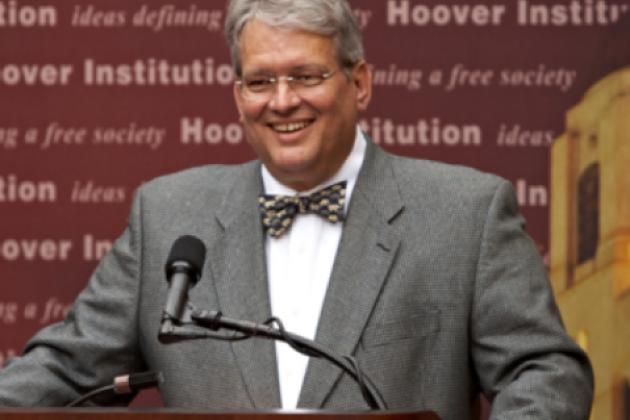 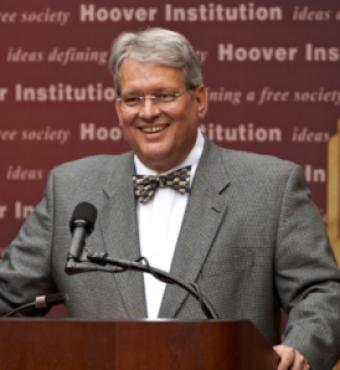 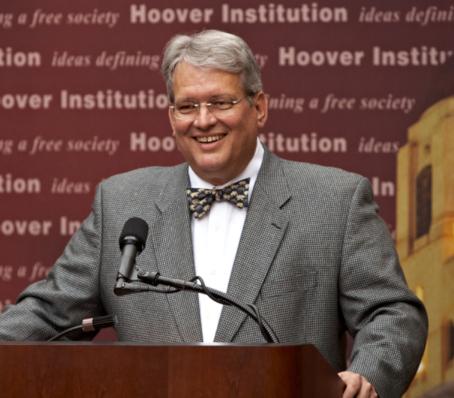 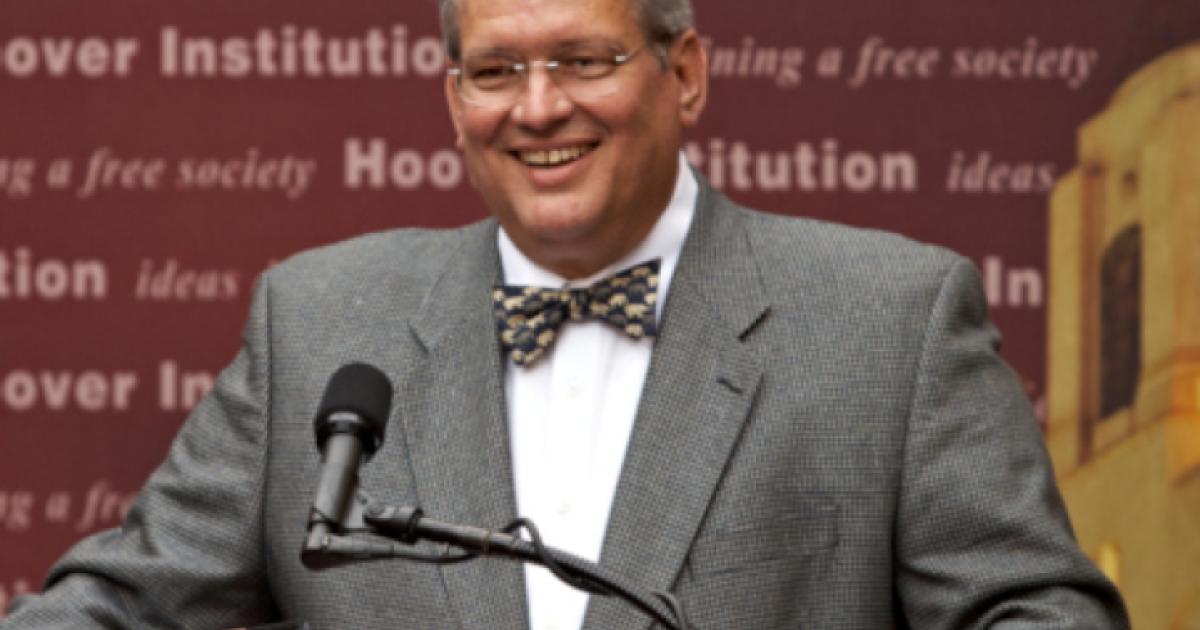 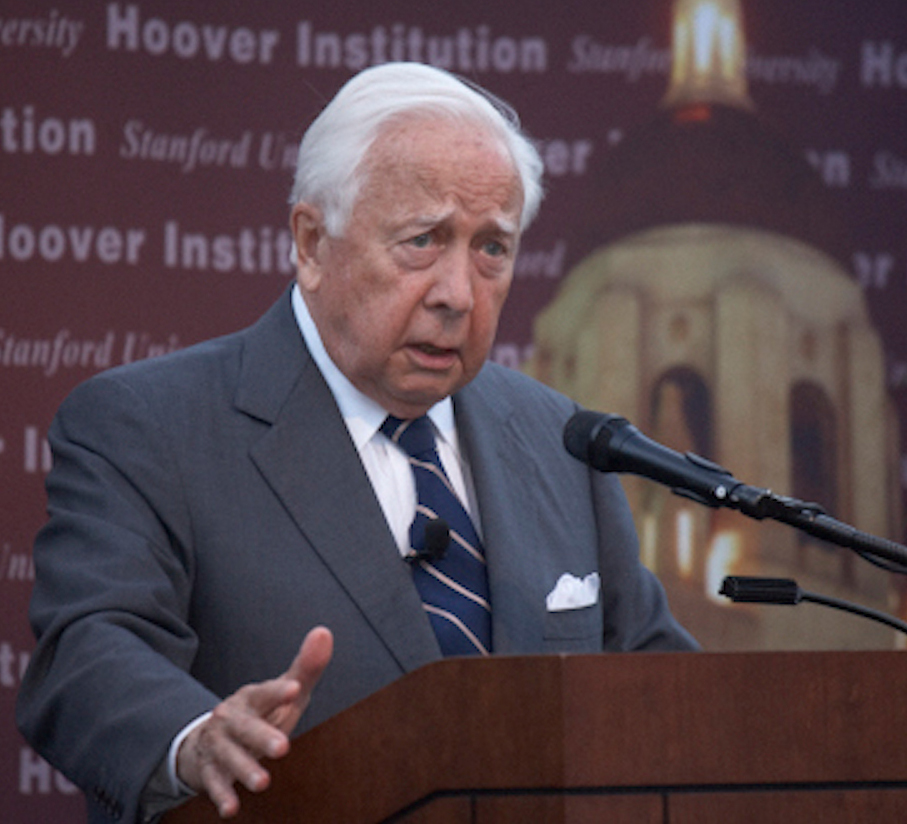 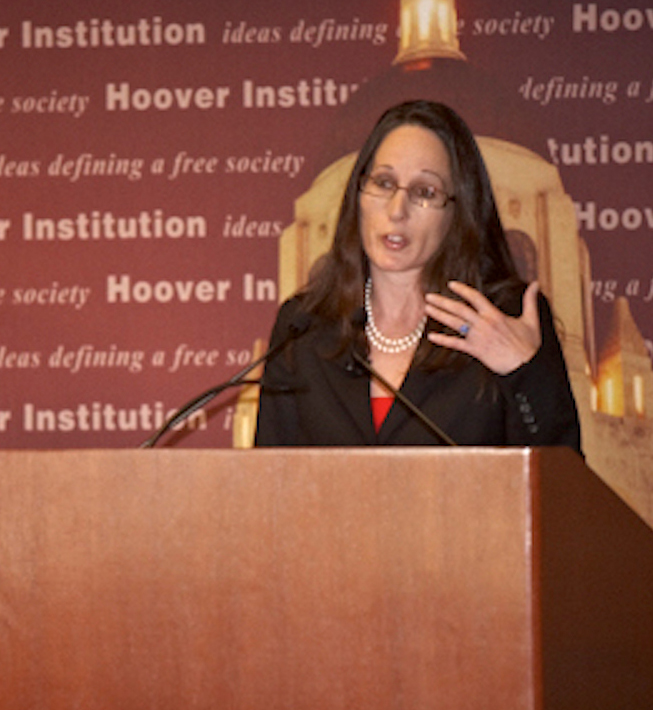 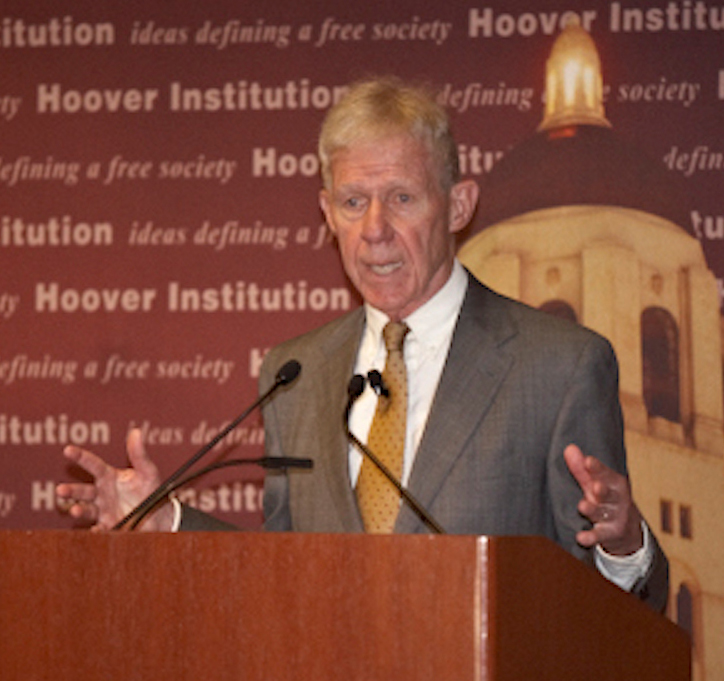 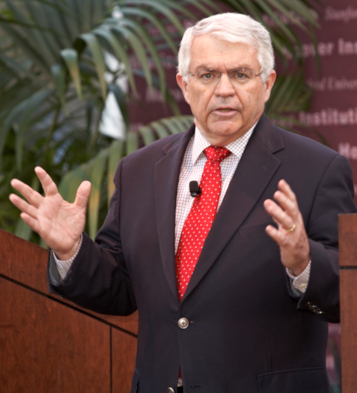 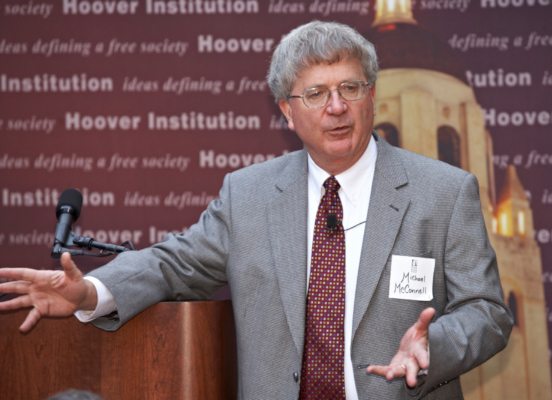 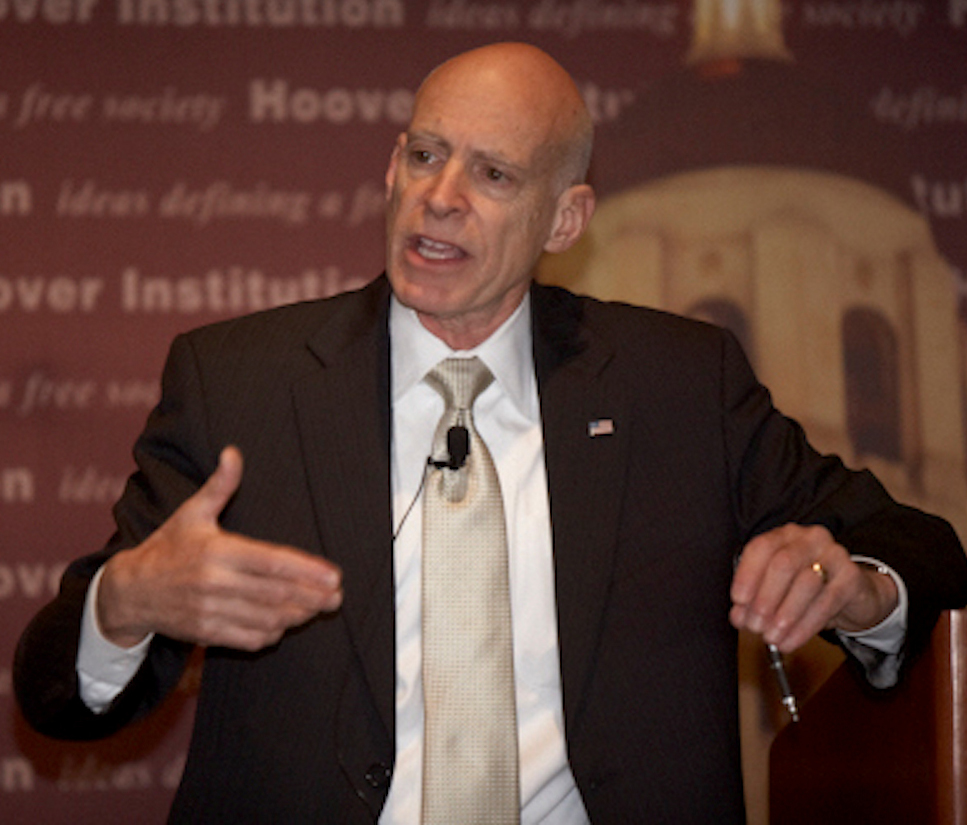 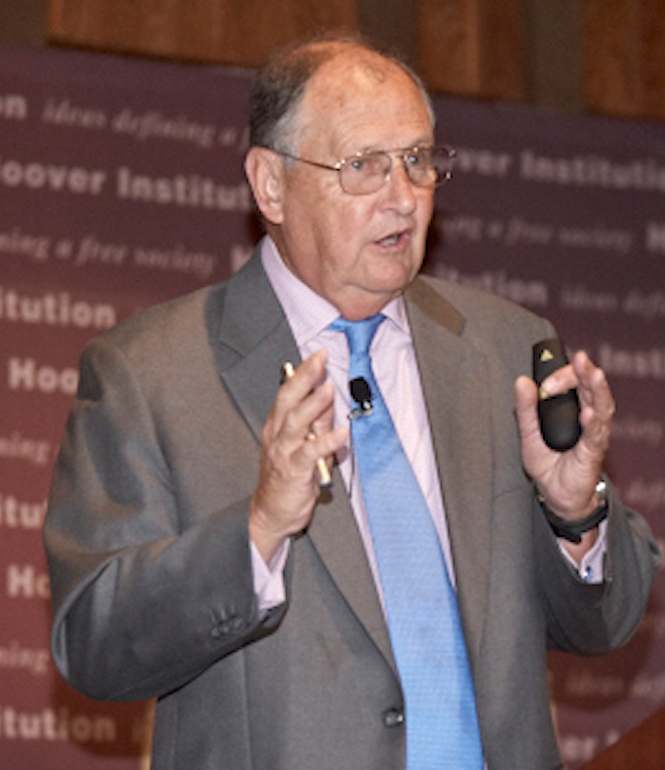 The Hoover Institution hosted its annual Board of Overseers’ summer meeting during July 10–12, 2012.

The program began on Tuesday evening with two dinner presentations hosted by John Raisian. Hoover fellows Daniel Kessler and Michael McConnell discussed “Health Care and the Constitution,” with McConnell beginning by speaking to the current health care situation as affected by the Supreme Court’s ruling on the Affordable Care Act and explained the difference between mandates enforced by a penalty versus a tax. Kessler spoke about changing the subsidy formula, Medicaid and Medicare, and the need to “get costs down.”

Hosted by Stephen Langlois, Hoover fellows and economists Russell Roberts and John Taylor spoke on “Economic Policy Now and After the Election.” Roberts began the evening by admitting that the complex nature of a country’s economy makes it difficult to determine precisely what’s the cause of the current economic malaise and, hence, equally difficult to come up with a cure to the problems. Roberts identified four major areas that must be addressed to help the economy, including the size of government, power of the financial sector, structured unemployment, and the role of the Federal Reserve System. Taylor’s talk boiled down Mitt Romney’s fifty-nine-point economic plan to five areas, including reducing the role of government, the corporate tax rate, possibly personal tax rates, regulation; addressing monetary policy and the role of the Federal Reserve; and stimulating international trade by opening markets and expanding free-trade agreements.

John Raisian, the Tad and Dianne Taube Director of the Hoover Institution, in the morning session gave a full briefing to members of the board. In his talk Raisian gave a detailed overview of the event; highlighted Hoover fellows and their accomplishments, emphasizing the Bradley Prize winners, and discussed Hoover’s Leadership Forum; Hoover Fellowships; the Friedman database, an upcoming project that will make all Milton and Rose Friedmans’ works available online, enhancing their fellowship with new prospects; and recent appointments.

Chris Dauer, associate director and a research fellow at the Hoover Institution, along with Eryn Witcher, associate director of public affairs, highlighted Hoover’s important communication initiatives. Dauer spoke to the success of short books and the addition of author pages on Amazon.com. He then played a short promotional video clip of Fouad Ajami’s new book, The Syrian Rebellion (Hoover Institution Press 2012). Dauer also discussed the newly redone Hoover Daily Report, new changes to the site Advancing a Free Society, including channels with new blogs titled Caravan, Data Matters, 2012 in Perspective, and Eureka. Lastly, Dauer showed clips from Uncommon Knowledge with Peter Robinson. Witcher gave an overview of Hoover’s outreach with a David Letterman inspired Top 10 Signs indicating that Hoover is turning ideas into action by emphasizing ideas such as unemployment, immigration, Twitter, Facebook, and a new Hoover Institution Studio, which is in progress.

Fouad Ajami, senior fellow at the Hoover Institution, and Charles Hill, a career minister in the US Foreign Service and a research fellow at the Hoover Institution, talked about “Syria Goes Under, Egypt Goes Islamist, Iran Goes Nuclear: Send in the Drones.” Hill discussed the overall picture of US foreign policy, emphasizing its importance because “America is turning away from the ‘world order’ that it has defended in wars and lead politically and diplomatically across the last 75 or 100 years.” He describes the “world order” as “an international system of states” and “a substantive layer of strategy for a better world” that has three parts: open trade, open expression, and defense of the international state system. Hill also touched on the Arab spring uprising in early 2011 and its importance in the global context. Ajami talked about the Muslim brotherhood in Egypt and detailed the demographics of the presidential elections in Egypt and Syria. He then spoke to the state of Syria and the thousands of people who are being brutally beaten, tortured, and killed. “For 17 months, the world has watched. Twelve hundred children have been killed. Houses and corpses are being burned,” said Ajami, who went on to describe the atrocities in detail.

Amy Zegart, a senior fellow at the Hoover Institution and a professor of political economy at the Stanford Graduate School of Business (by courtesy), discussed “China’s Evolving Military and the Implications for US Foreign Policy.” Zegart began her talk by pointing out that the rise of China is the “most widely read news story of the 21st century.” She went on to discuss the difference between the US and Chinese systems. “The Chinese regime values stability [whereas] Americans value freedom” and “we have very different world views and languages.” She mentioned people from three key areas that participated in the conference at Hoover a few months ago: academic experts on national security and China, senior military leaders, and top policy makers. Zegart compared opposing views at the conference, including the “outside looking in” and “Beijing looking out.” From the “outside looking in,” Americans view China as rising, but China still has problems with innovation, weaknesses in its naval capabilities, and corruption in its military. From the “Beijing looking out” view, China is a fragile country, spending much on internal security; its challenges include political stability problems (i.e., poverty), governance issues, land seizures in the countryside, and demographics (i.e., its one child policy). In conclusion, the Americans are still “winning by a large margin over China,” but the lack of competiveness in K–12 education and lack of thinking in the long term, as China already does, need to be addressed.

Edward Lazear talked about the labor market in his speech titled “Weak Labor and the Blame Game.” He began by discussing the importance of the job market, which affects most people directly. He then showed the Obama-Biden website statistics that uses charts and graphs to show the last four years’ unemployment rates. Lazear went on to discuss the explanations from both President Obama and candidate Romney regarding unemployment and touched on the topic of hiring and layoffs. Comparing the policies of candidate Romney and President Obama, he said that Romney wants to “cap, cut, balance,” whereby “you cap at 20 percent of GDP, the total amount of government spending, you cut nonsecurity discretionary spending back to 2008 levels, and go for a balanced budget in the next eight years,” whereas President Obama wants to stimulate  the economy (i.e., green jobs, more unemployment insurance, “Cash for Clunkers” program) and bring the deficit down to half of what it was when he came into office.

David Brady, deputy director and Davies Family Senior Fellow at the Hoover Institution, and Morris Fiorina, a senior fellow at the Hoover Institution and the Wendt Family Professor of Political Science at Stanford University, discussed the upcoming election in “The Road to the 2012 Elections.” Fiorina began by citing statistics on the public’s interest in previous presidential elections that acknowledged the lack of participation among young voters, ages 18–29. He showed the Gallup polls trail heat charts in previous years and what little change has occurred in both partisanship and voter ideology during the past five years. Brady then discussed why campaigns matter and how the Ray Fair Model can be a predictor of presidential elections. Brady, who believes that independents will decide the upcoming presidency, showed historical approval charts from previous elections and how the electorate has changed from 2008 to 2012.

David McCullough, best-selling author of John Adams and 1776, gave the before-dinner remarks on Wednesday evening in his talk titled “Why History Matters.” McCullough is a Pulitzer Prize winning author, a recipient of the National Humanities Medal and the Presidential Medal of Freedom, and has been elected to the American Academy of Arts and Sciences and to the American Academy of Arts and Letters. He is also a familiar presence on public television as host of Smithsonian World and The American Experience and a narrator of numerous documentaries, including Ken Burns’s The Civil War. McCullough began by speaking of the joys of being a writer and the importance of learning about history. As he stated, “History is an extension of the human experience. Why should we limit our time, understanding who we are, and why we are the way we are, to just this little bit of biological time that we’re alive when the whole realm of the human experience is open to us.” He also touched on how history can make us all more appreciative, responsible, and knowledge citizens. According to McCullough, history matters because we are special; we must never forget what the people who were here before us did for us and for our country.

Bolick, a research fellow at the Hoover Institution who also serves as the director of the Goldwater Institute Center for Constitutional Litigation in Phoenix, talked about his new book in his eponymous speech titled “Two-Fer: Electing a President and a Supreme Court.” Bolick stressed two reasons why he wrote Two-Fer: the first reason being to emphasize the importance of the US Supreme Court. “The Supreme Court affects our lives in almost every way from criminal law to property law to the rights that we most deeply cherish: freedom of religion, freedom of speech, and so on,” Bolick stated. The other reason is that the stakes in US Supreme Court nominations are growing rapidly, those stakes including longevity, appointing younger justices, the science of appointing justices getting better, and the president learning to not disappoint his “base” when selecting justices. Bolick continued by discussing the implications of the recent Supreme Court’s Affordable Care Act decision. He concluded by praising the Supreme Court and the work it has done in the past twenty years and saying how the next presidential election is crucial.

Gary Roughead, USN (Ret.), an Annenberg Distinguished Visiting Fellow at the Hoover Institution, remarks concerned “Defense Strategy, Budgets, and the Defense Industrial Base,” in which he talked discussed the defense strategy and how it will be executed in the coming years. He also discussed the maritime strategy in the Western Pacific, the Arabian Gulf, and the Indian Ocean regions. Roughead explained the “pivot to Asia” idea, which he said should be termed “rebalance to Asia,” in that the term pivot means looking to one idea, which, in turn, means pivoting away from something else. He also discussed the status of Iran, Iraq, and Afgahanistan. In the future, Roughead believes, Africa will play a significant role; he is also working on a project titled Arctic Security Strategy because the Arctic will also play a more significant role in the future. Roughead also mentioned other important strategies including “the commons” (space, cyberspace, oceans), a significant focus on counterterrorism, capable allies, air/sea battles, and defense budget issues.