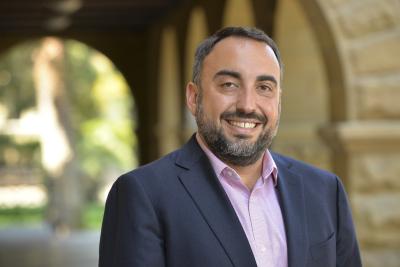 Alex Stamos was a visiting fellow at the Hoover Institution. Stamos is a cybersecurity expert, business leader, and entrepreneur working to improve the security and safety of the Internet through his teaching and research at Stanford University. He is an adjunct professor at Stanford’s Freeman Spogli Institute, and a William J. Perry Fellow at the Center for International Security and Cooperation.

Prior to joining Stanford, Stamos served as the chief security officer of Facebook. In this role, he was charged with understanding and mitigating information security risks to the company and safety risks to the 2.5 billion people on Facebook, Instagram, and WhatsApp. He led the company’s investigation into manipulation of the 2016 US election and helped pioneer several successful protections against these new classes of abuse.

Before joining Facebook, he was the chief information security officer at Yahoo, rebuilding a storied security team while dealing with multiple assaults by nation-state actors. While at Yahoo, he led the response to the 2013 Edward Snowden disclosures and represented the company in a hearing of the US Senate’s Permanent Subcommittee on Investigations.

In 2004, he cofounded iSEC Partners, an elite security consultancy. As a trusted partner to the world’s largest technology firms, he coordinated the response to the “Aurora” attacks by China's People’s Liberation Army at multiple Silicon Valley firms and led groundbreaking work securing the world’s largest desktop and mobile platforms. During this time, he also served as an expert witness in several notable civil and criminal cases, such as the Google Street View case, and performed pro bono work for the defendants in the Sony vs. George Hotz case and United States vs. Aaron Swartz.

A noted speaker and writer, he has appeared at the Munich Security Conference, NATO CyCon, Web Summit, DEF CON, CanSecWest, and Black Hat and has highlighted the work of diverse technologists as an organizer of the Trustworthy Technology Conference and OURSA.

Stamos has been involved with securing the US election system as a contributor to Harvard’s Defending Digital Democracy Project. He is a member of the Aspen Institute’s Cyber Security Task Force, the Bay Area CSO Council, and the Council on Foreign Relations. He also serves on the advisory board to NATO’s Collective Cybersecurity Center of Excellence in Tallinn, Estonia.

Stamos earned a bachelor of science degree in electrical engineering and computer science at the University of California-Berkeley. He lives in the Bay Area with his wife and three children.