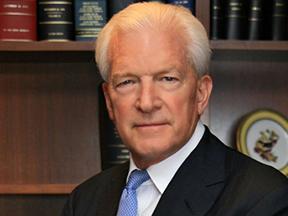 Ambassador David Mulford is a distinguished visiting fellow at the Hoover Institution at Stanford University. In this role, Ambassador Mulford focuses on research, writing, and activities related to global economic integration, including the legal and political environments of trade agreements and their management. He concentrates his efforts on economic growth in the Indian subcontinent and the trend of receding globalization in developed economies.

Before joining the Hoover Institution, Ambassador Mulford served as the vice chairman international at Credit Suisse from 2009 to 2016. In this role, Ambassador Mulford worked with a range of clients across the integrated bank with a particular focus on governments, as well as corporate clients, across the globe.

Ambassador Mulford rejoined Credit Suisse in March 2009 after spending five years as the US ambassador to India. Ambassador Mulford came to India in early 2004, at a time when India-US relations were undergoing a dramatic shift and the strategic partnership between New Delhi and Washington was gaining momentum as the two sides began working closely together on an unprecedented range of issues. Ambassador Mulford was a major player for five years building a strong partnership between the United States and India, the world’s two largest multicultural democracies.

Before being nominated as the US ambassador to India, Mulford served as chairman international and member of the Executive Board of Credit Suisse, based in London. From 1992 to 2003, Mulford was responsible for leading Credit Suisse’s worldwide, large-scale privatization business and other corporate and government advisory assignments.

Mulford was undersecretary and assistant secretary of the US Treasury for International Affairs from 1984 to 1992. He served as the senior international economic policy official at the Treasury under Secretaries Regan, Baker, and Brady. the highlights of Mulford’s responsibilities and accomplishments at the Treasury Department include US deputy for coordination of economic policies with other G-7 industrial nations; head of the administration’s yen/dollar negotiations with Japan; the administration’s senior adviser on financial assistance to Russia and other states of the former Soviet Union; leadership of the administration’s international debt strategy, and the development and implementation of the Baker / Brady Plans and President Bush’s Enterprise Initiative for the Americas.

Mulford also led both the US delegation to negotiate the establishment of the European Bank for Reconstruction and Development, as well as the G-7 negotiations to reduce Poland’s official bilateral debt in 1991.

Before his government service, Mulford was a managing director and head of International Finance at White, Weld & Co., with responsibility for coordinating efforts with Credit Suisse on international financial business from 1966 to 1974. He was then seconded to the Saudi Arabian Monetary Agency (SAMA), where he served as a senior investment adviser from 1974 to 1983. His responsibilities included managing the investment of Saudi oil revenues and developing a comprehensive investment program for SAMA. He also served as a special assistant to the secretary and deputy secretary of the Treasury as a White House Fellow during 1965 to 1966, in the first year of the White House Fellowship Program.

Mulford received a doctor of philosophy degree from Oxford University, an MA in political science from Boston University, and a BA in economics, cum laude, from Lawrence University in Appleton, Wisconsin. He did graduate studies at the University of Cape Town, South Africa, in 1960 and has published two books on Zambia. He received an honorary doctor of laws degree from Lawrence University, the Legion d’Honneur from the president of France, the Distinguished Alumni Award from Boston University, the Alexander Hamilton Award, the highest honor bestowed by the secretary of the Treasury for extraordinary service and benefit to the Treasury Department and the nation, the Order of May for Merit from the President of Argentina, and the Officer’s Cross of the Medal of Merit from the President of Poland.