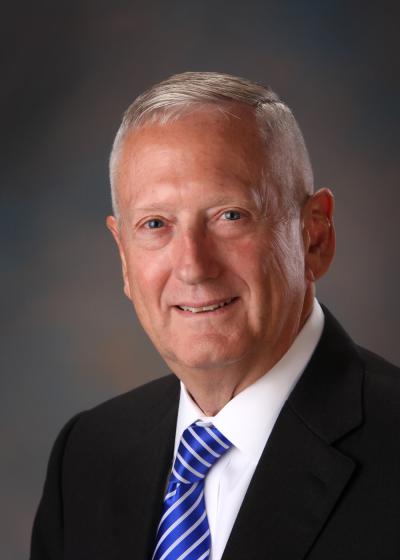 General Jim Mattis, US Marine Corps (Ret.), is the Davies Family Distinguished Fellow, after having served as the nation’s 26th Secretary of Defense in the administration.

In December of 2016, President Donald J. Trump nominated Mattis for Secretary of Defense and he was confirmed a month later. Mattis left Hoover to apply his knowledge and experience to help the President shape his national defense policy.

General Mattis commanded at multiple levels in his forty-three year career as an infantry Marine. As a lieutenant in the western Pacific, he served as a rifle and weapons platoon commander in the Third Marine Division. As a captain in the Pacific and Indian Ocean, he commanded a rifle company and a weapons company in the First Marine Brigade. As a major he was the battalion officer at the Naval Academy Prep School and commanded Marine recruiters in the Pacific Northwest and Hawaii. As a lieutenant colonel he commanded an assault battalion breaching the Iraqi minefields in Operation Desert Storm. As a colonel he commanded 7th Marine Regiment and, on Pentagon duty, he served as the Department of Defense Executive Secretary. As a brigadier general he was the Senior Military Assistant to the Deputy Secretary of Defense.

Following 9-11 he commanded the First Marine Expeditionary Brigade and Naval Task Force 58 in operations against the Taliban in southern Afghanistan. As a major general, he commanded the First Marine Division during the initial attack and subsequent stability operations in Iraq. In his first tour as a lieutenant general, he was in charge of Marine Corps Combat Development at Quantico and subsequently served as Commander, I Marine Expeditionary Force/Commander, U.S. Marine Forces in the Middle East. As a general he served concurrently as the Commander of U.S. Joint Forces Command and as NATO’s Supreme Allied Commander for Transformation.

Before retiring in 2013 he was the Commander of U.S. Central Command, directing military operations of over 200,000 soldiers, sailors, airmen, Coast Guardsmen, Marines and allied forces across the Middle East. He is the author of the New York Times bestseller, Call Sign Chaos: Learning to Lead, and the co-editor of the book, Warriors & Citizens: American Views of Our Military.