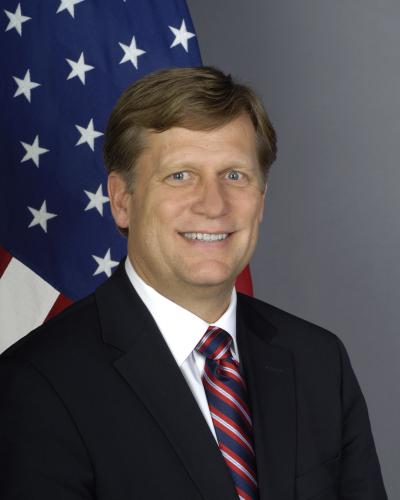 He has authored and edited several books including, From Cold War to Hot Peace (2018), with Kathryn Stoner, eds., Transitions to Democracy: A Comparative Perspective (2013); Advancing Democracy Abroad: Why We Should and How We Can (2009); with Valerie Bunce and Kathryn Stoner-Weiss, eds., Democracy and Authoritarianism in the Postcommunist World (2009); with Anders Aslund, eds., Revolution in Orange: The Origins of Ukraine's Democratic Breakthrough (2006); with Nikolai Petrov and Andrei Ryabov, Between Dictatorship and Democracy: Russian Postcommunist Political Reform (2004); with James Goldgeier, Power and Purpose: American Policy toward Russia after the Cold War, (2003); with Timothy Colton, Popular Choice and Managed Democracy: The Russian Elections of 1999 and 2000 (Brookings Institution Press, 2003); Russia’s Unfinished Revolution: Political Change from Gorbachev to Putin (2001); Russia's 1996 Presidential Election: The End of Bi-Polar Politics (1997); with Tova Perlmutter, eds., Privatization, Conversion and Enterprise Reform in Russia (1995); Post-Communist Politics: Democratic Prospects in Russia and Eastern Europe (1993); and, with Sergei Markov, The Troubled Birth of Russian Democracy: Political Parties, Programs and Profiles (1993). His articles have appeared in Constitutional Political Economy, Foreign Affairs, Foreign Policy, International Organization, International Security, Journal of Democracy, Political Science Quarterly, Post-Soviet Affairs, and World Politics. His op-eds have appeared in the New York Times, the Wall Street Journal, the Washington Post, Politico, Time, and the Weekly Standard.

After the Collapse of Communism: Comparative Lessons of Transition via Cambridge University Press
Learn More

Advancing Democracy Abroad: Why We Should and How We Can via Rowman & Littlefield Publishers

Want To Undermine Putin? Help Russians Who Are Opposed To The War. via The Washington Post

What Putin Fears Most via Project MUSE