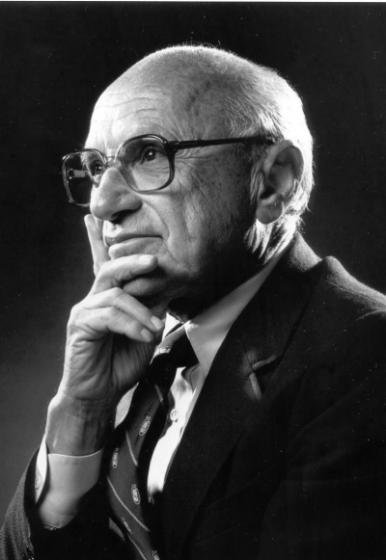 Click here to see the Hoover project showcasing the works of Milton and Rose Friedman.

Milton Friedman, recipient of the 1976 Nobel Memorial Prize for economic science, was a senior research fellow at the Hoover Institution from 1977 to 2006. He passed away on Nov. 16, 2006. (Link to obituary.) He was also the Paul Snowden Russell Distinguished Service Professor Emeritus of Economics at the University of Chicago, where he taught from 1946 to 1976, and a member of the research staff of the National Bureau of Economic Research from 1937 to 1981.

Friedman was awarded the Presidential Medal of Freedom in 1988 and received the National Medal of Science the same year.

He was widely regarded as the leader of the Chicago School of monetary economics, which stresses the importance of the quantity of money as an instrument of government policy and as a determinant of business cycles and inflation.

In addition to his scientific work, Friedman also wrote extensively on public policy, always with a primary emphasis on the preservation and extension of individual freedom. His most important books in this field are (with Rose D. Friedman) Capitalism and Freedom (University of Chicago Press, 1962); Bright Promises, Dismal Performance (Thomas Horton and Daughters, 1983), which consists mostly of reprints of columns he wrote for Newsweek from 1966 to 1983; (with Rose D. Friedman) Free to Choose (Harcourt Brace Jovanovich, 1980), which complements a ten-part television series of the same name shown over the Public Broadcasting Service (PBS) network in early 1980; and (with Rose D. Friedman) Tyranny of the Status Quo (Harcourt Brace Jovanovich, 1984), which complements a three-part television series of the same name, shown over PBS in early 1984.

Friedman was also active in public affairs, serving as an informal economic adviser to Senator Barry Goldwater in his unsuccessful campaign for the presidency in 1964, to Richard Nixon in his successful 1968 campaign, to President Nixon subsequently, and to Ronald Reagan in his 1980 campaign.

He was awarded honorary degrees by universities in the United States, Japan, Israel, and Guatemala, as well as the Grand Cordon of the First Class Order of the Sacred Treasure by the Japanese government in 1986.

Two Lucky People, his and Rose D. Friedman's memoirs, was published in 1998 by the University of Chicago Press.