The E.U. Experiment Has Failed

With Christianity moribund and patriotism stigmatized, the only principle that unites Europeans is one of material comfort.

The E.U. Experiment Has Failed 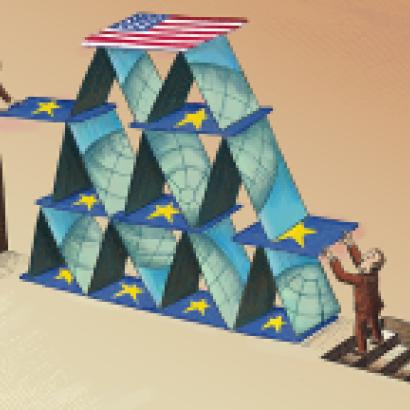 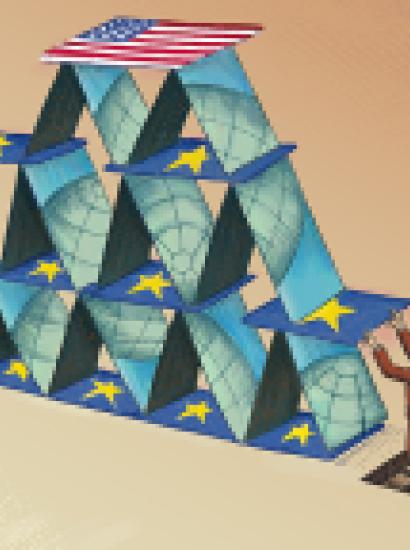 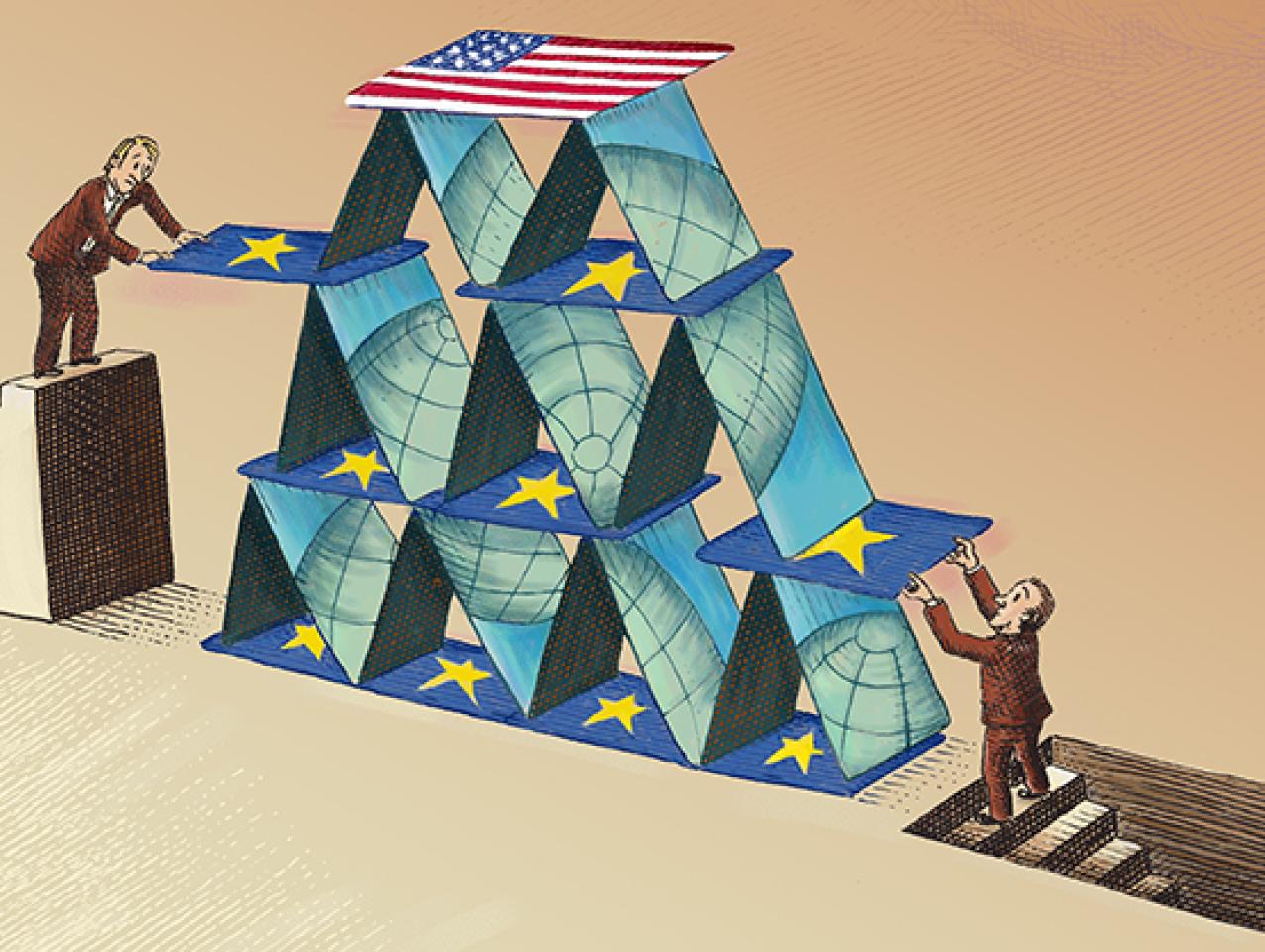 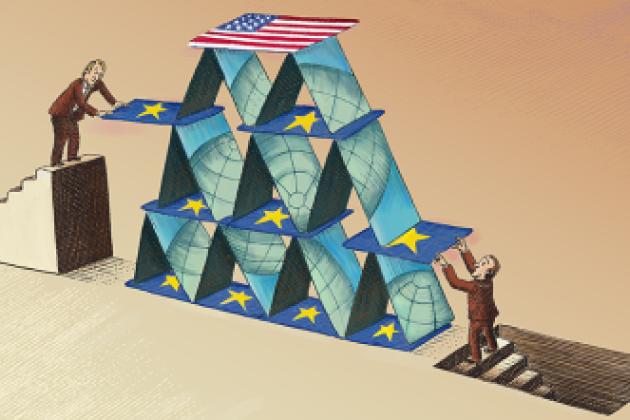 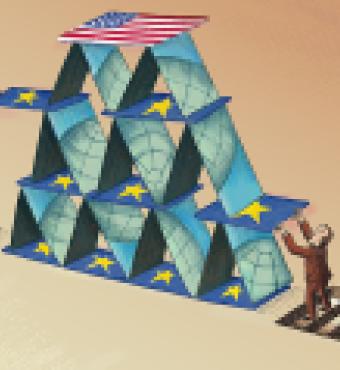 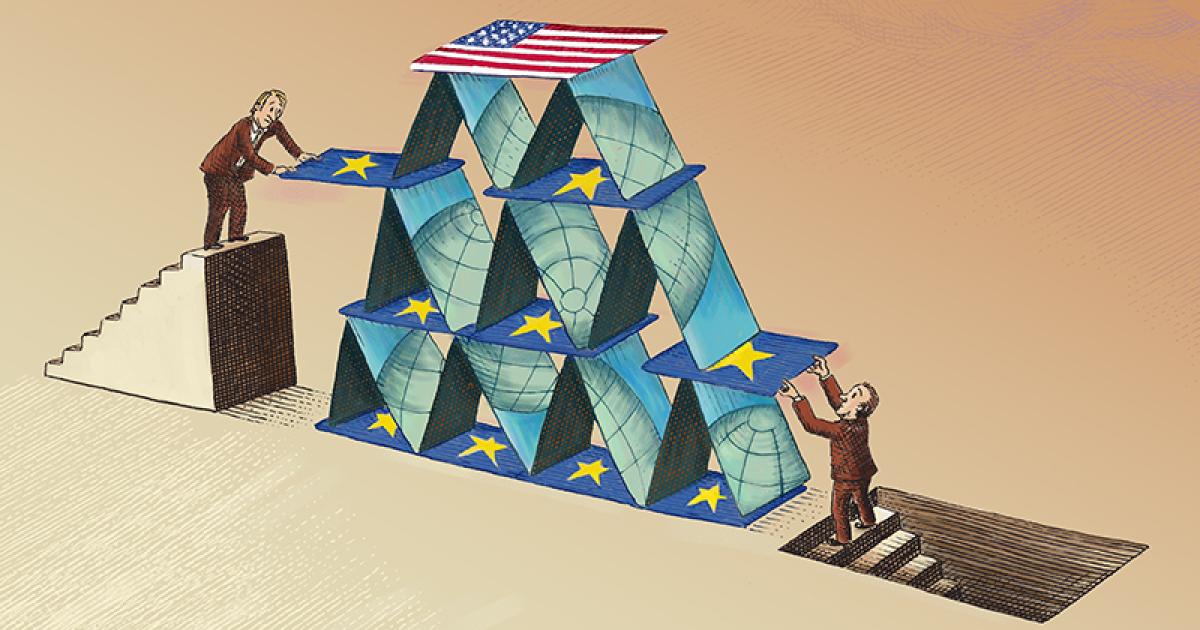 The slow-motion crisis of the European Union is the big story that rarely gets the attention it deserves. Even an event like the recent terrorist attack in France that left 17 dead is often isolated from the larger political, economic, and social problems that have long plagued the project of unifying the countries of Europe in order to harness its collective economic power, and to avoid the bloody internecine strife that stains its history.

On the economic front, the E.U.’s dismal economic performance over the last six years was summed up in a December headline in Business Insider: “Europe Stinks.” The 2008 Great Recession exposed the incoherence of the E.U.’s economic structure, particularly its single currency, which is held hostage by the diverse economic policies of sovereign nations. The data tell the tale. The E.U.’s GDP grew 1 percent in 2013, anemic compared to the U.S.’s 2.2 percent. In December 2014, unemployment in the E.U. averaged 11.4 percent, while in the U.S. it was 5.6 percent. We are troubled by our labor force participation rate of 62.7 percent, a 36-year low. But in the E.U., it was 57.5 percent in 2013. Our recovery from the recession may be slow by our historical standards, but it is blazing compared to the E.U.’s.

As Josef Joffe of Germany’s Die Zeit newspaper summarized in January, “These ailments are deeply embedded in economies that lag behind on investment, innovation and competitiveness . . . Europe as a whole is beginning to look like Greece writ large. But the long-term data whisper to Europe as well as to Greece: Reform or decline.”

Socially, the E.U. is troubled by two trends: demographic decline and the presence of concentrated populations of unassimilated and disaffected Muslim immigrants. Europe is an aging people; by 2030, one in four Europeans will be 65 years or older, reflecting the Europeans’ failure to reproduce. Not since the 1970s have European women averaged 2.1 children, the number necessary to replace a population. The rate in 2014 was 1.6. In countries with low retirement ages and generous benefits, an aging population means more and more money taken from the productive young and investment in the economy, further reducing competiveness, innovation, and growth.

And it means fewer workers, a factor in the influx of immigrants into the E.U. over the last several decades. As Ingo Kramer, head of the Confederation of German Employers’ Associations, put it, “We need immigration for our labor market and to allow our social system to function.” Large numbers of these immigrants have come from Muslim countries, bringing with them a religion and social mores radically different from Europe’s. Yet European countries have done a poor job of demanding assimilation of immigrants into the cultures of their new homes.

The result has been large concentrations of immigrants segregated in neighborhoods like the banlieues of Paris or the satellite “dish-cities” of Amsterdam. Shut out from labor markets, plied with generous social welfare payments, and allowed to cultivate beliefs and cultural practices inimical to liberal democracy, many of these immigrants despise their new homes and find the religious commitment and certainty of radical Islam an attractive alternative. And like the two French-Algerian brothers who attacked the offices of the satirical magazine Charlie Hebdo, some turn to terrorism.

Such violence, along with cultural practices like honor killings, forced marriages, and polygamy, remind Europeans of just how alien many immigrants are. They are stoking a political backlash against Muslims, the political consequences of which will be disruptive, if not dangerous. Populist parties, for example, opposed to unfettered immigration, angry at sluggish economies, and chafing against E.U. regulatory encroachments on national sovereignty, are growing across Europe. And there are signs that there is a constituency for these parties.

In France, which has 5 million Muslims, the largest Muslim population in Europe, a recent bestseller is Éric Zemmour’s Le suicide Français, about the erosion of French national identity and sovereignty. After the attacks in Paris, novelist Michel Houellebecq’s new novel Soumission, which imagines a France ruled by the Muslim Brotherhood, became an instant bestseller. These literary successes make sense given that according to a 2013 poll in the French newsweekly L’Express, 74 percent of the French said that Islam “is not compatible with French society.”

Similar sentiments and political reactions can be found across Europe. The United Kingdom Independence party in England, the National Front in France, and the “Patriotic Europeans against the Islamization of the Occident” (PEGIDA) in Germany are united in their Euroskepticism. They are all calling for renewed pride in Western civilization and their national identities, and demand that immigration be limited and Muslim immigrants compelled to assimilate. If these parties continue to strengthen their membership, they will be able to join coalition governments. At that point, they will be able to affect policy in ways—like restricting immigration—that will lead to greater political conflict and perhaps civil violence.

All these economic, social, and political problems are no secret. But the proposed solutions to them usually focus on policy changes or technical adjustments to the structure and functioning of the E.U. Yet this begs the fundamental question that has troubled European unification ever since it began with the Treaty of Rome in 1957: What comprises the collective beliefs and values that can form the foundations of a genuine European-wide community? What is it that all Europeans believe?

Europe and its nations were forged in the matrix of ideas, ideals, and beliefs of Christianity, which gave divine sanction to notions like human rights, the sanctity of the individual, political freedom, and equality. Today, across Europe Christian belief is a shadow of its former self. Fewer and fewer Europeans regularly go to church, with weekly attendance in most European countries in the low double digits. Churches are being shuttered across the continent; the Church of England closes about 20 churches a year and the German Catholic Church closed 515 in the past decade, according to the Wall Street Journal. It is common for many European cathedrals to have more tourists during a service than parishioners. This process of secularization––already well advanced in 1887 when Nietzsche famously said, “God is no more than a faded word today, not even a concept”––is nearly complete today, leaving Europeans without it historical principle of unity.

Nor over the last century have the various substitutes for Christianity managed to fill the void. Political religions like communism and fascism failed bloodily, leaving behind mountains of corpses. Nor has secular social democracy, with its utopian ideals, provided people with a transcendent principle that justifies sacrifice for the greater good, or even gives people a reason to reproduce. A shared commitment to leisure, a short workweek, and a generous social safety net is nothing worth killing or dying for. Neither is the vague idea of a transnational E.U. ruled by unaccountable Eurocrats in Brussels and Strasbourg.

More important, from its beginning, the idea of the E.U. depended on the denigration of patriotism and national pride, for these were seen as the road to the exclusionary, blood-and-soil nationalism that fed Nazism and fascism. Yet all peoples are the product of a particular culture, language, mores, histories, traditions, and landscapes. The “postmodern” abstract E.U. ideal of transcending such parochial identities was destined to collide with the real cultural differences between European nations. These differences have become obvious during the economic crisis of the last decade, when hard-working, thrifty Germans have been loath to subsidize what they see as indolent, improvident Greeks, suggesting that there is more that separates than unites those two peoples. That sense of belonging to a community defined by a shared identity cannot be created by a single currency.

National pride and amour propre were not eliminated by the E.U. and the ideology of its bureaucratic elites, only driven underground for a while. With Christianity moribund, and patriotism stigmatized as neo-fascist, it is unsurprising that Europe has failed to find a unifying principle beyond mere material comfort, resulting in the continent-wide malaise that manifests itself in the various failed policies threatening the E.U. project today, what Pope Francis last November called “a general impression of weariness and aging, of a Europe which is now a ‘grandmother,’ no longer fertile and vibrant”—a culture “weary with disorientation.”

We American should not indulge the schadenfreude aroused by watching our sometimes-condescending older cousins slip farther and farther behind us in global importance and power. Europe is still collectively the world’s largest economy, and its travails will impact the whole globe. More importantly, many of the trends weakening Europe today are active in our own country. The scorning of national pride and American exceptionalism, the decline of Christianity in the public square, multiculturalism and its ethnic separatism and divisive identity politics, and the preference of many Americans for greater social welfare spending, redistribution of wealth, and dirigiste economic policies all point us to a fate like Europe’s.

Self-doubt about the goodness of one’s way of life and living just for today’s pleasures are luxuries a great power cannot afford. In a world of violent ideologies and aggressive autocrats, a free people must have something beyond this world that they believe is worth killing and dying for. Europe seemingly has lost those ideals and beliefs that made it the nurse of freedom, democracy, and human rights. America has taken on that global role, but if we go the way of Europe, if we too no longer know what we believe, who will take our place?