In an election year defined by breaks from tradition, the ballot before California voters next month fits right in. Beyond the historic and highly unusual presidential race, Californians will make their first general election choice between two Democrats for U.S. Senate. And among a fleet of propositions, the voters will be asked to legalize recreational marijuana and about a pair of initiatives that together give Californians the choice to repeal, reform, or keep as is the state’s death penalty. 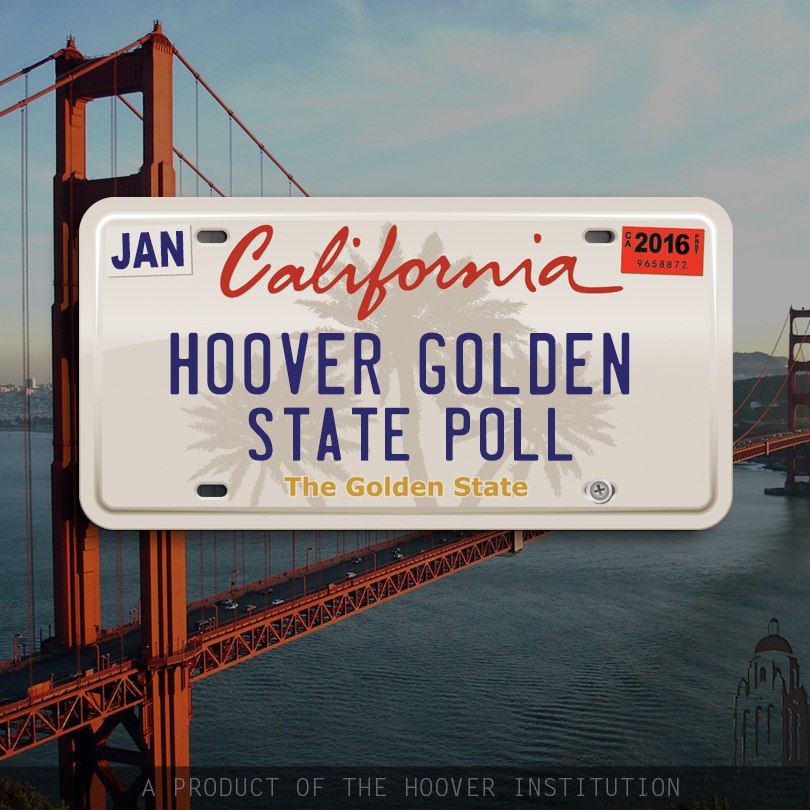 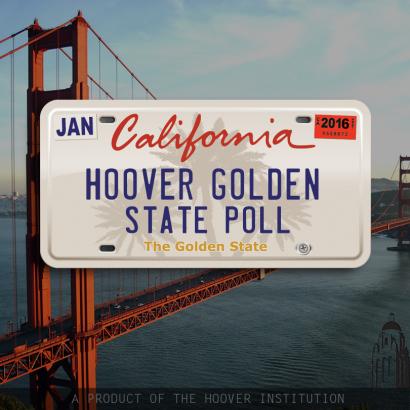 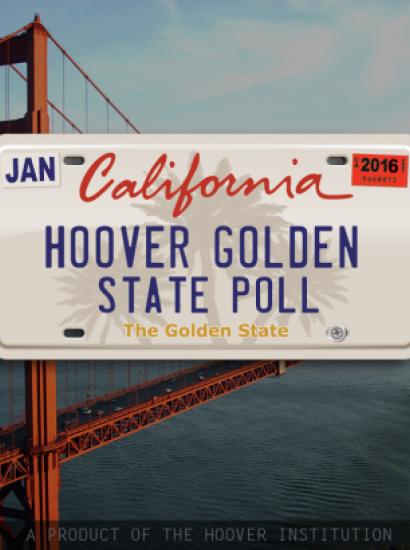 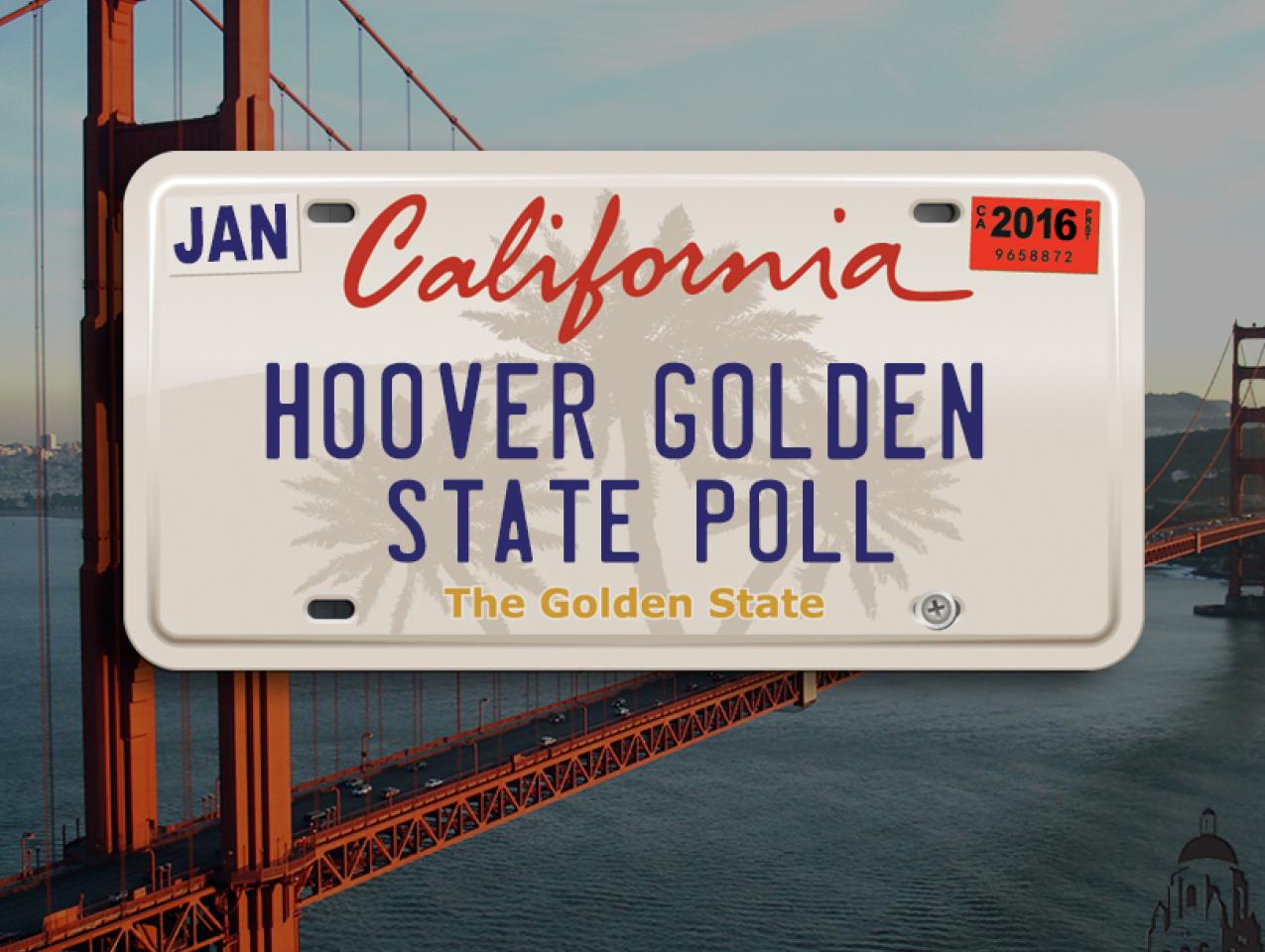 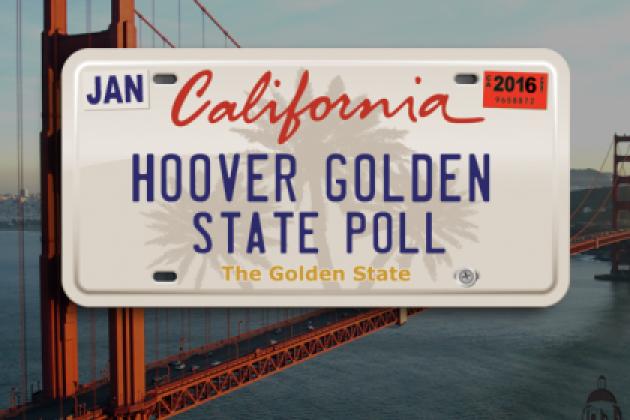 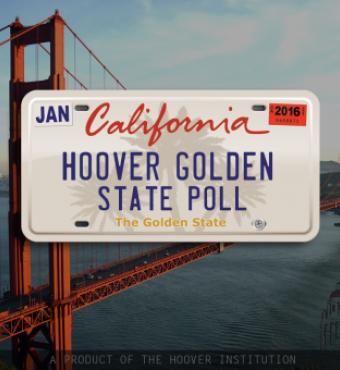 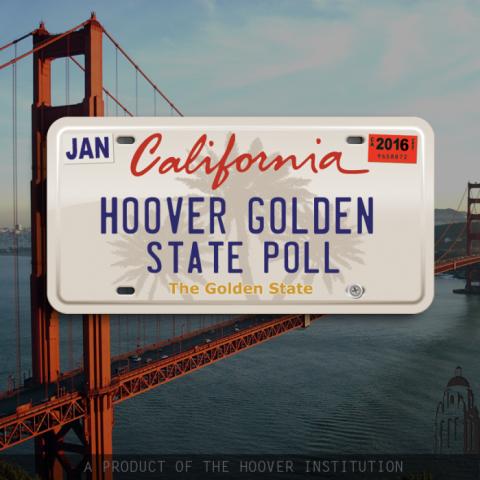 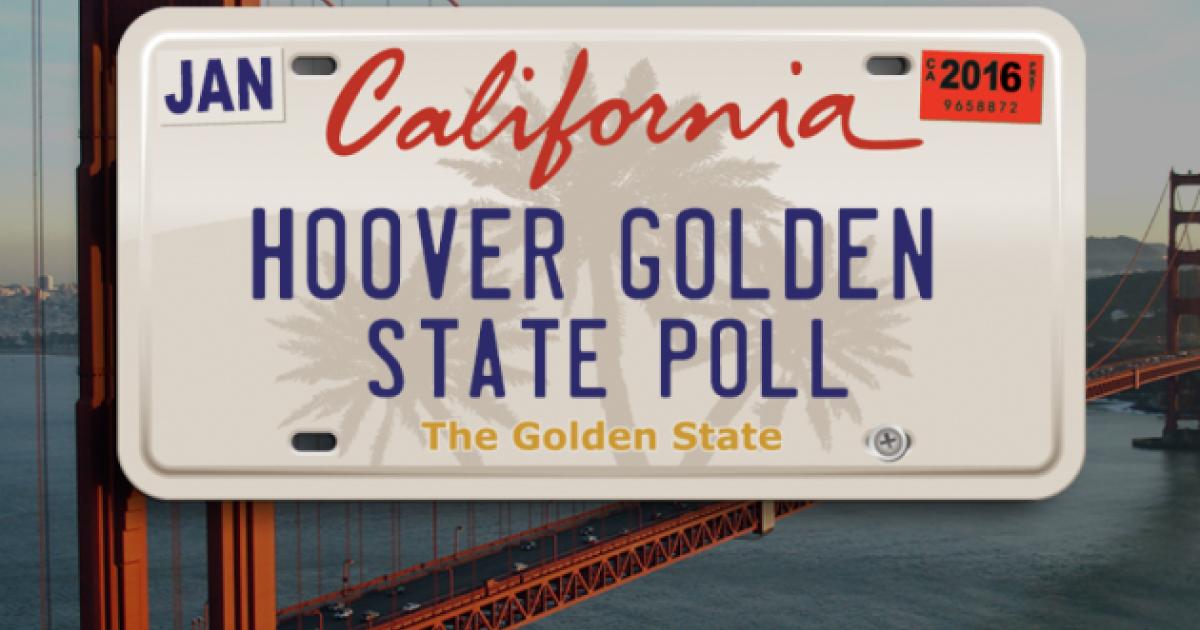 In an election year defined by breaks from tradition, the ballot before California voters next month fits right in. Beyond the historic and highly unusual presidential race, Californians will make their first general election choice between two Democrats for U.S. Senate. And among a fleet of propositions, the voters will be asked to legalize recreational marijuana and about a pair of initiatives that together give Californians the choice to repeal, reform, or keep as is the state’s death penalty. In addition, voters will be asked to extend 2012’s Prop 30 tax rate increases and to approve the price controls for prescription drug purchases by state health agencies.

The most recent Golden State Poll set out to study the vote choices and opinions of Californians in this wild election season. The survey, administered by the survey research firm YouGov and designed in conjunction with Stanford University’s Bill Lane Center for the American West, was conducted October 4 -14th, 2016. The survey’s sample is 1250 Californians who are likely voters in this November’s general election. The margin of error is plus or minus 3.28 percent for the full weighted sample.

The full survey questioned voters on the presidential election, the U.S. Senate race, and five ballot propositions: extension of Prop 30 taxes, repeal of the death penalty, reform of the death penalty process, price controls on prescription drugs in state health care programs, and marijuana legalization. The full results, with data reported by demographic and political groups, and are available here. Among our most notable findings:

How poorly will Trump do in California? The October 2016 Golden State Poll has the Republican nominee winning only 30% of the state’s vote and Hillary Clinton claiming 54%. For Republicans, that would be an even worse showing than the 1992 election, when Ross Perot siphoned off voters from George H. W. Bush and left him with just 33% of the vote. Since that Bill Clinton victory, Republican presidential nominees have managed between 37% and 44%, with the last two GOP nominees, Romney and McCain, both winning 37%. Trump would need to claim all the undecided voters (7%) in our survey to even hit that low watermark for California Republicans in the post-Reagan era. It is certainly bad news for Trump that only 75% of self-reported registered Republicans said they plan to vote for their party’s nominee for president, compared to 87% of Democrats who intend to vote for Hillary Clinton.

The Golden State Poll finds that State Attorney General Kamala Harris enters the last weeks of the campaign with a large double-digit lead over fellow Democrat and U.S. Congresswoman Loretta Sanchez, who represents Orange County. Among likely voters who expressed a preference between the two candidates, Harris gathered nearly twice the support (41%) received by Sanchez (22%).

Striking in this high-profile Senate race is the large number of voters (37%) who told us they remain unsure about their vote for Senator Barbara Boxer’s successor. That uncertainty in the electorate is driven primarily by self-reported registered Republicans, 64% of whom said they were not sure about how they intended to vote in the U.S. Senate election. This figure is especially eye-catching when compared to the 41% of No Party Preference (NPP) voters and only 19% of Democratic voters who said they were still unsure at this point in the campaign.

Harris holds a large lead over Sanchez with both Democratic (57% - 24%) and NPP (39% - 21%) voters. But among Republicans who did express a candidate preference, Sanchez has a slight advantage over Harris (21% to 15%), which suggests that Sanchez’s push to appeal to undecided conservative voters in this last stage of the campaign is, indeed, her best hope of pulling off a surprise victory. Sanchez began her political career as a Republican with an unsuccessful bid for city council in the L.A. suburb of Palos Verdes Estates, and now it seems that her shot at becoming the first Latina to serve in the U.S. Senate depends on persuading and mobilizing Republican voters while running as a Democrat. With much made of the trouble for down-ballot Republicans with Trump at the top of the ticket, Loretta Sanchez could have her own Trump problem if his candidacy depresses turnout among the Republicans whose votes she needs.

That the “Trump Problem” is bipartisan in California is due, of course, to California’s adoption of the open primary and this November Senate election involving two Democratic candidates as a result of the June election voting. Looking beyond this Election Day to the coming assessment of this first Senate race under the new system, open primary defenders will have some reckoning to do.

But delivering on that promise depends on many voters making informed decisions based on real political and public policy preferences. Our survey data raises the concern that wide swaths of California voters in this U.S. Senate race might not be doing that. Pluralities - and even a large majority - of independent and out-party (Republican) voters have not settled on a candidate even after a long campaign and despite in-party (Democratic) voters largely doing so. If, when faced with two candidates of the same political party, independents and the out-party voters effectively toss a coin or cast their vote for the candidate with better name recognition, that undermines the case for the open primary reform.

Prop 64, the legalization and taxation of recreational marijuana, seems poised for acceptance, with 56% of likely voters planning to vote yes and 34% voting no according to our survey. Self-identified liberals have far and away the highest levels of support for legalization (80%), compared to 56% for moderates and only 29% among conservatives. Against stereotype, self-reported Sanders primary voters were not more likely than Clinton voters to support legal pot. 68% of Sanders primary voters support Prop 64 as do 68% of Clinton primary voters.

If Prop 64 passes, it will mark the tipping point of social change on the issue of legalized pot in California. Even 6 years ago, on the November 2010 ballot, Proposition 19 legalizing marijuana failed 46.5% to 53.5%. Although that result did show growing expectancy, with more support than the 33.5% who supported the 1972 legalization effort.

It has been almost 11 years since a California death row prisoner was executed. Over that decade the number of inmates on death row in California has only continued to grow as at the death penalty has effectively become a life sentence with a perpetual and costly appeals process. This November’s ballot offers Californians two chances to do something about a part of the criminal justice system widely seen as completely broken, with both death penalty opponents and supporters in agreement, though for different reasons. Proposition 62 would repeal the death penalty outright, while Proposition 66 would reform the appeals process with the objectives of saving the state money and actually carrying out the death penalty in at least some cases.

But Californians haven’t coalesced into a majority around either policy change, although pluralities seem to understand that something should be done. On Prop 62, death penalty repeal, likely voters were split, with 42% intending to vote yes on repeal, 43% voting no, and 15% still not sure of how they would cast their ballot. Based on these figures, Prop 62 seems likely to be defeated, as was Prop 34, the November 2012 ballot initiative to repeal the death penalty. Prop 34 failed 48% - 52%.

On Prop 66, which would reform the death penalty system, 38% said they would vote yes, 24% no, and the remaining 38% - as many as said they would support the reform - responded that they remained unsure about their vote on the measure.

In an exchange about these findings with my colleague Bill Whalen, who provides guidance for the Golden State Poll rooted in decades as a participant in and observer of California politics, he  keenly summed up the problem. “The death penalty initiatives underscore the worst about California politics. There is frustration with the death penalty in California, albeit that comes from different extremes. Yet we are headed for a result that will please no one.”

With neither opponents or supporters of the death penalty waging highly visible campaigns on either of these propositions, it might be that activists overestimated the degree to which most voters have strong preferences on the death penalty one way or the other.

In contrast to of the inability of death penalty activists on either side of the issue to build majorities for their favored propositions, our survey work on Prop 55 shows that Governor Jerry Brown and Prop 30 tax increase advocates have been successful in building support around Prop 55, which extends 2012’s Prop 30’s higher tax rates for an additional 12 years.

The success of campaign to tie Prop 30 and 55 to schools in the minds of voters is also reflected in how likely voters who support Prop 55 responded to our question about reasons they were in favor of the proposition. Among the five reasons presented, the top response, with 91% saying they strongly or somewhat agreed, was that K-12 schools and community colleges needed the money. This even came in ahead of the standard rationale that “The wealthy should pay more in taxes,” which was supported by 85%, or that “Ending Prop 30 might contribute to state budget deficits,” with 72%.

Among the five propositions we questioned voters about, the electoral fate of Prop 61 has the greatest uncertainty. The measure, which would prohibit California state agencies from paying more for a prescription drug than the lowest price paid for the same drug by the U.S. Department of Veterans Affairs, received support from 51% of likely voters in our sample. That slim majority, combined with 25% of likely voters saying they were still not sure about how they would vote on the proposition, means that while the passage of Prop 61 seems likely, a narrow defeat should not be surprising.

Proposition 64 would legalize recreational marijuana use and establish the regulatory regime for cultivation, sale, and use of marijuana.  Californians, in 1996, approved Proposition 215, which made medical marijuana use legal.  Since then, attempts to legalize marijuana for recreational use have failed.  Proponents say this is an important criminal justice reform that will also yield substantial new revenues for the state.  Opponents are concerned the measure is sloppily written that ties the hands of the Legislature with few opportunities to amend provisions found to be problematic once implemented.