In this episode of Battlegrounds, H.R. McMaster and Ine Søreide discuss geopolitical realities after Russia’s renewed invasion of Ukraine and implications for European security, the European Union, NATO, and the transatlantic relationship. 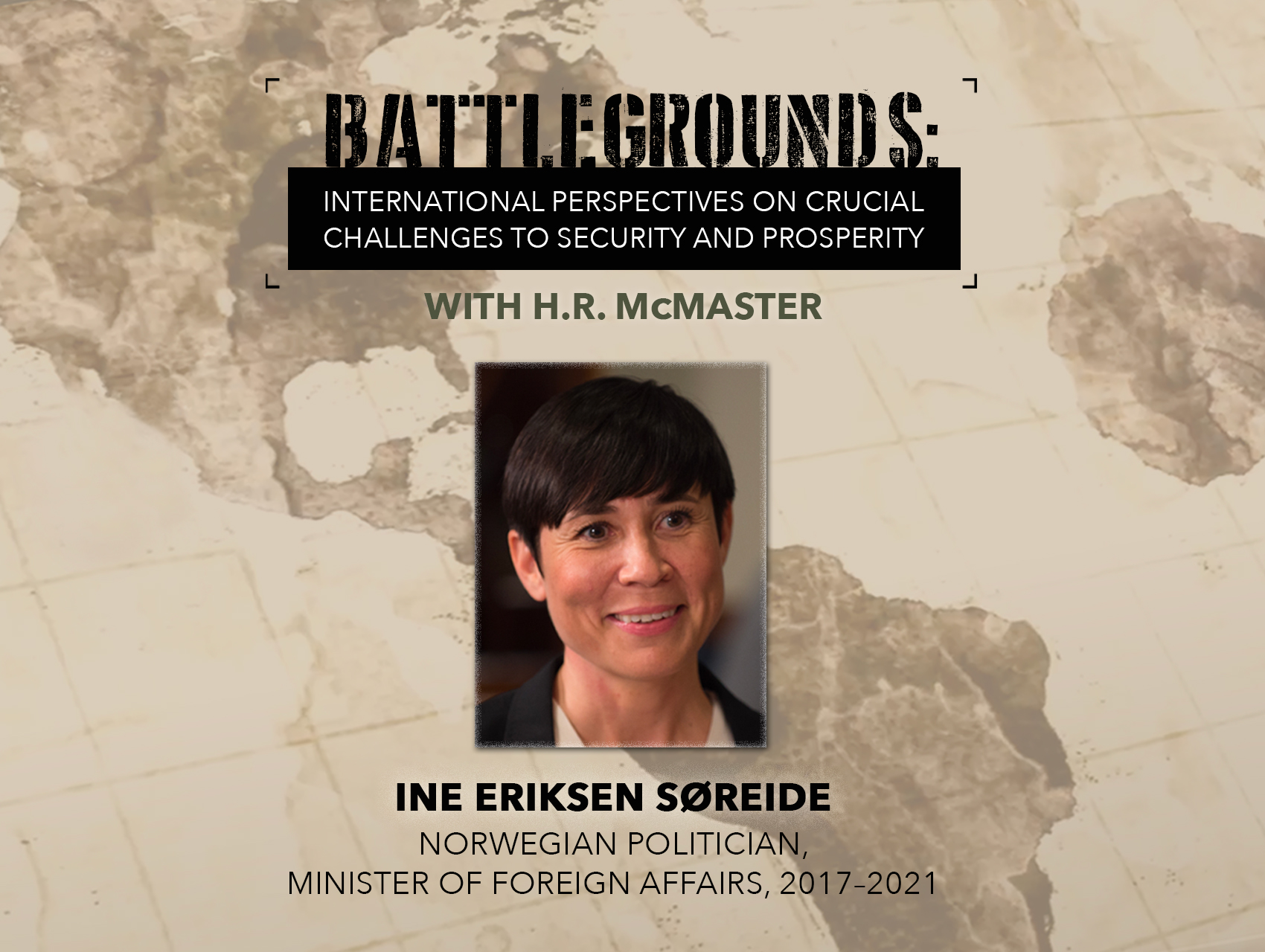 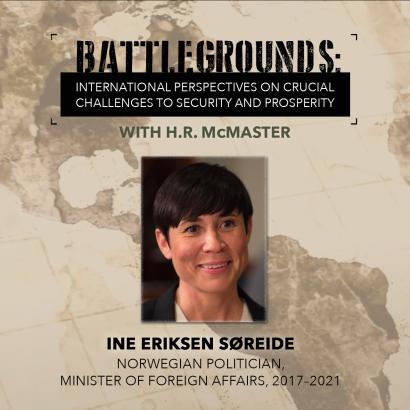 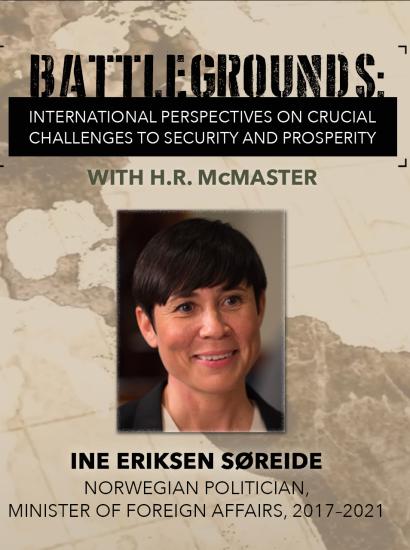 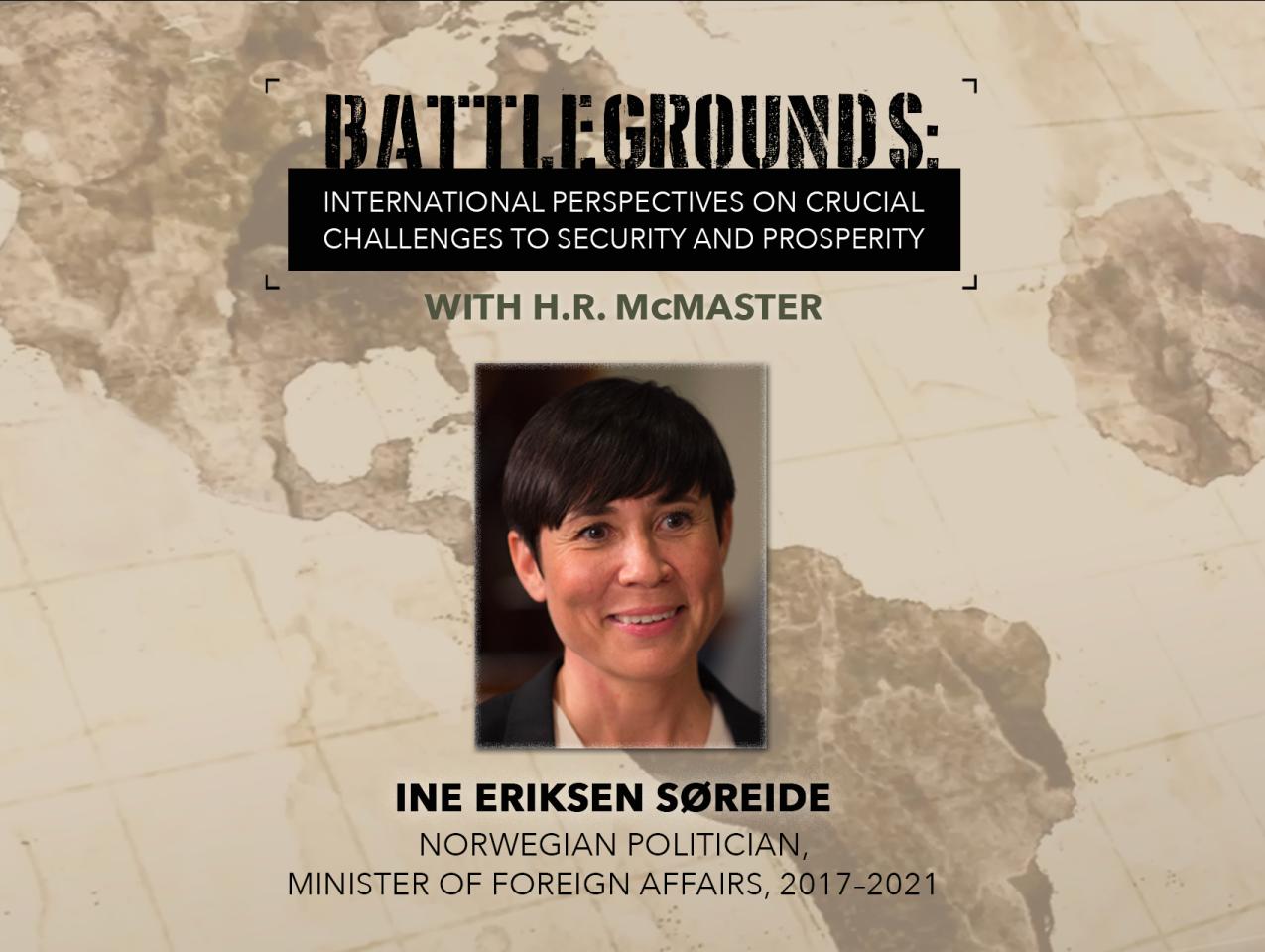 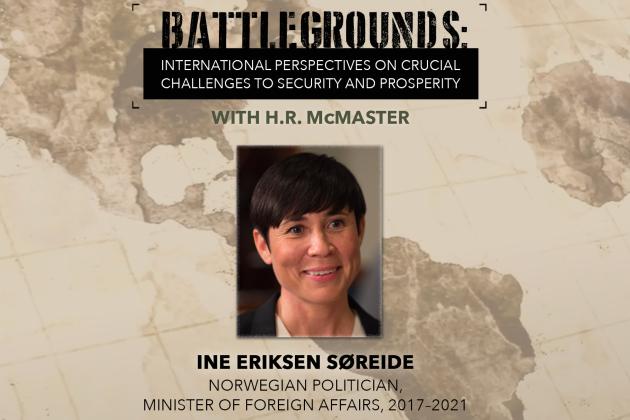 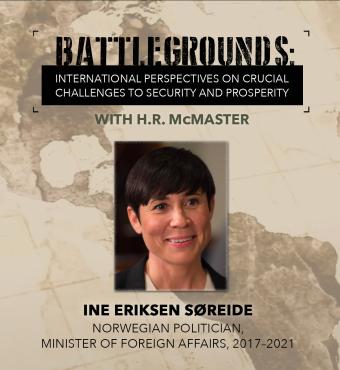 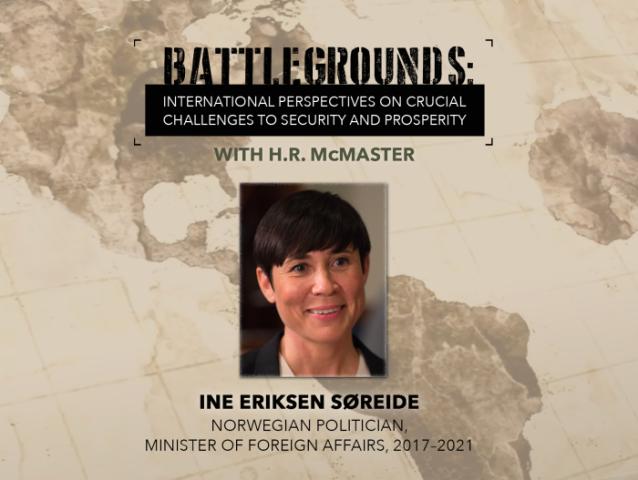 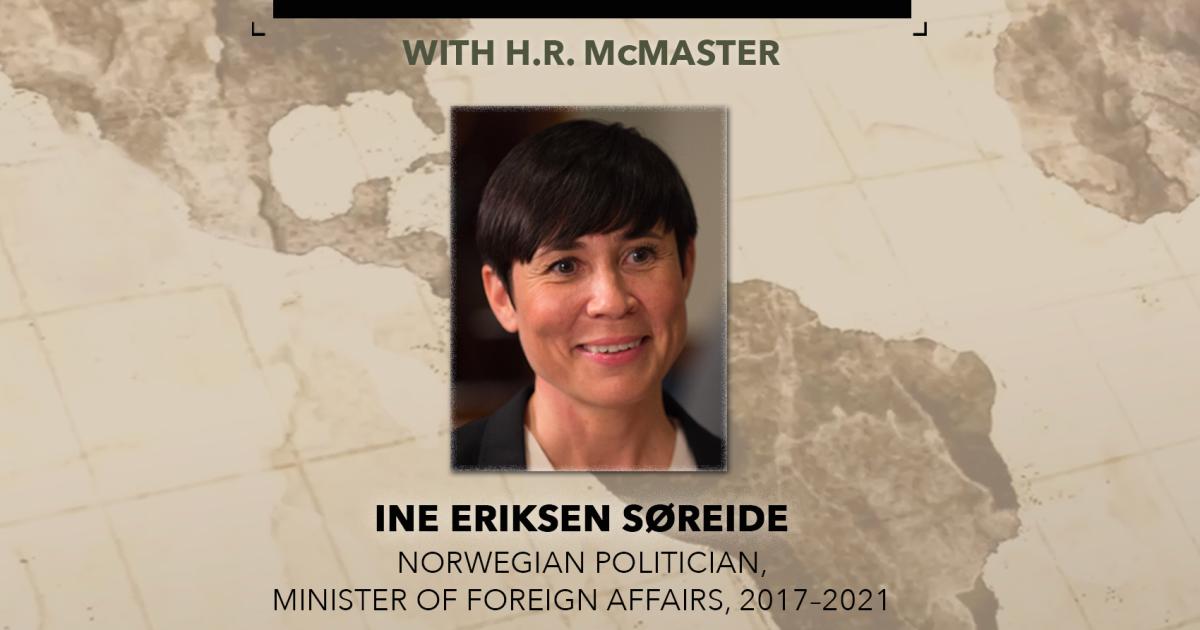 In this episode of Battlegrounds, H.R. McMaster and Ine Søreide discuss geopolitical realities after Russia’s renewed invasion of Ukraine and implications for European security, the European Union, NATO, and the transatlantic relationship.

In this episode of Battlegrounds, Ine Erikson Søreide, Norway’s former minister of foreign affairs and minister of defense, joins Fouad and Michelle Ajami Senior Fellow H. R. McMaster for a wide-ranging conversation about Russia’s invasion of Ukraine and its implications for the European Union, NATO, and the transatlantic relationship.

Søreide explains that Vladimir Putin’s decision to invade Ukraine wasn’t a surprise. He never accepted the new political boundaries and the European security structure that emerged after the collapse of the Soviet Union. From Putin’s perspective, Russia historically has had outsize influence in the nations surrounding its borders, including Ukraine, and its hegemony over Eastern Europe should remain intact. Moreover, he is threatened that market economies, democratic governance, and freedom of expression thrive in many of these countries. If these ideas took strong hold among the Russian populace, Putin’s autocratic style rule would be seriously undermined, Søreide argues.

A key turning point in the Kremlin’s foreign policy came in 2014, Søreide contends, when Ukraine signed an association agreement with the European Union, putting it on track for full integration with that political and economic body. Putin would not accept Ukraine leaving its sphere of influence in favor of a permanent orientation toward the West. He thus persuaded Ukraine’s then president Viktor Yanukovych to nix the agreement, precipitating events that led to Yanukovych’s abdication, Russia’s annexation of Crimea, and a proxy conflict between Kyiv and Russian separatists in the Donbas region that persists today. Between 2014 and the beginning of Russia’s “special operation” on February 24, 2022, more than 14,000 people have been killed and 1.5 million people have been internally displaced from their homes in Eastern Ukraine.

Søreide believes Putin calculated that he could launch a full-scale invasion of Ukraine at little political cost, as many NATO members had stable diplomatic relations with the Kremlin and relied on Russian energy resources. However, she maintains that Putin severely underestimated the solidarity and strong response demonstrated by the United States and its European partners. Nevertheless, Russia’s military operation has been conducted with unrestrained brutality. More than nine million Ukrainians are displaced, a number that includes half of that nation’s children.

Søreide is encouraged that Sweden and Finland will abandon their position of neutrality, adopted at the beginning of the Cold War, and become NATO member states. Both countries will join the alliance with keen military expertise and a deep knowledge of Russia. She maintains that Scandinavian nations could be pivotal to countering the Kremlin, should it decide to deploy its high-tech submarines and shut down the Greenland–Iceland–United Kingdom Gap, a geostrategically important maritime route that connects Northern Europe with the Atlantic Ocean. Another pressing concern for Scandinavian nations is Russia’s Kola Peninsula, bordering Norway, where the Kremlin stores both ballistic missile submarines and nuclear warheads.

Søreide is also encouraged that European governments will do more to share the financial burden of their defenses, stressing that appropriations must be directed toward weaponry and equipment that can be efficiently integrated into NATO member forces and that won’t be outpaced by the latest technologies.

On the energy security front, Søreide is confident that Europe will reduce its dependency on Russian fossil fuels but admits that transitioning to alternative short-term sources will be an uphill challenge. Many suppliers will have to modify their longer-term contracts to help countries with immediate needs. Meanwhile, Europe doesn’t have liquified natural gas (LNG) terminals outside Spain and Portugal. Germany is currently building LNG terminals, she explains, but it will take years before they are complete. Søreide adds that fully transitioning to renewable sources, such as solar and wind power, will also take extensive time.

The European Union also needs to reduce its dependencies on critical supply chains, in which China has a central role, Søreide maintains. She doesn’t believe in cutting off trade with China, since doing so would have an adverse impact on Western markets. Søreide asserts, however, that EU and NATO member countries should remain vigilant to the security risks posed by commercial ties with Chinese firms.

Finally, Søreide emphasizes that the political dimension of NATO is equally important to its defense pillar. Without political cohesion and the will to invoke Article 5 for collective defense, the military alliance would be rendered powerless, she concludes.

Ine Eriksen Søreide is a Norwegian politician from the Conservative Party and current chair of the Standing Committee on Foreign Affairs and Defense.  She served as the first female Minister of Foreign Affairs from 2017 to 2021 and the Minister of Defense from 2013 to 2017.